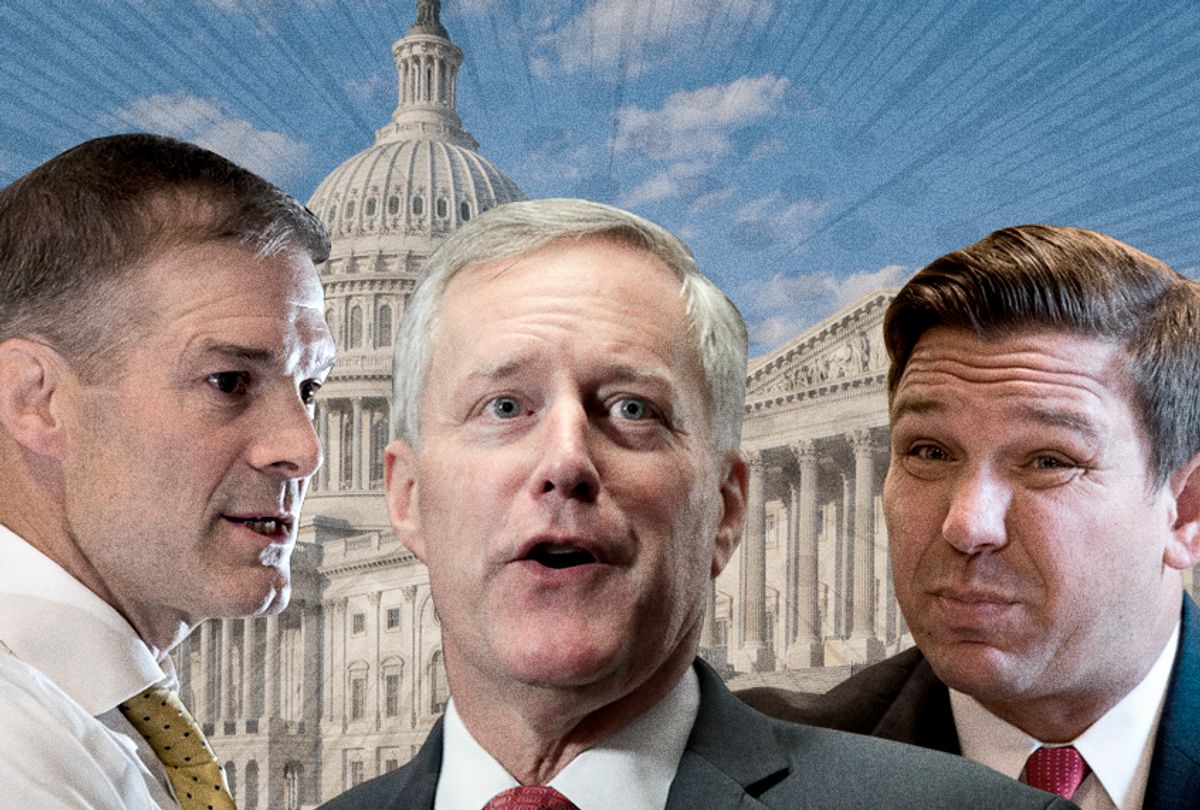 In what is probably the least shocking news of the last few weeks, Politico reported on Monday that President Trump is getting fed up with Rudy Giuliani. For some reason he doesn't think his new lawyer is helping his case by going on every TV show and repeatedly implicating his client in more and more crimes. Trump is said to be specifically upset that Giuliani failed to shut down the Stormy Daniels scandal. Apparently he actually believed the long-ago New York mayor was an "expert on campaign finance" and is disappointed to find out that he's a phony who doesn't know what he's talking about. So much for the old saying, "It takes one to know one."

Rudy's not going to get any better at this. Since his main function is to go on television and "fight," it's likely that if Trump is already disillusioned with him, Giuliani's days are numbered. He may not be the only one of Trump's BFFs to be in the doghouse. According to the AP, the president even snapped at his "shadow chief of staff," Sean Hannity, for using the phrase "funneled money through a law firm" because he thinks it has "illegal" connotations. Perhaps the fact that Giuliani was openly suggesting that Trump had been involved in a criminal scheme was what brought that particular image to mind.

But don't worry. Trump still has many friends in Washington who are willing to give it their all for his cause. Indeed, there's one group he has dubbed "the warriors" (or as I prefer to call them: the four horsemen of the Apocalypse) for their willingness to fight for him in the Congress. He name-checked them on "Fox & Friends": Reps. Jim Jordan of Ohio, Mark Meadows of North Carolina, Matt Gaetz of Florida and Ron DeSantis, also of Florida. According to Politico, this is the group bringing up articles of impeachment against Deputy Attorney General Rod Rosenstein over his failure to provide documents on the Mueller investigation quickly enough and, of course, his refusal to continue to pursue Hillary Clinton right into the grave.

These four are not exactly household names, or they weren't until Trump got elected. Jordan is the veteran of the group, having first been elected in 2006, while Meadows and DeSantis have only been in Congress since 2013. Gaetz is a 36-year-old freshman and the subject of this GQ profile, which described him as the "Trumpiest congressman in Trump's Washington."

Meadows and Jordan are top dogs in the House Freedom Caucus, and all four are servile Trump loyalists who are often on the phone with the president and carry his sword on Fox News shows around the clock. They are denigrating the Department of Justice and Special Counsel Robert Mueller probe at least as hard as Trump. Indeed, if you want to know where the president gets his talking points (aside from Hannity), he often follows the warriors' lead after watching them on one of his Fox shows. Their willingness to take on the DOJ by abusing their "oversight" role has made him very happy.

They are only too delighted to help. Gaetz told Politico,"The president’s been frustrated by some of the tactics that have been used against him. I think those frustrations are well-founded in fact and I appreciate him encouraging others to join our call." Others see it a bit differently:

[T]he left-leaning public watchdog group Democracy 21 accused Meadows and Jordan of “colluding to obstruct and potentially give Trump control over” Mueller’s probe. Rep. Jerrold Nadler (D-N.Y.), the top Democrat on the House Judiciary Committee, says they are “trying to sabotage” Mueller, and “want to force a confrontation with the Deputy Attorney General.”

Rosenstein responded to their impeachment threat by saying that the Department of Justice will not be "extorted."

He later gave a speech obliquely addressing this issue which concluded with this:

Our system of government is not self-executing. It relies on wisdom and self-restraint. In a democratic republic, liberty is protected by cultural norms as well as by constitutional text. Lawyers and judges bear great responsibility for implementing and explaining those principles. The further we get from the founding generation, the less we appreciate how much everything depends on people rather than paper.

Abraham Lincoln believed that the best way to ensure the survival of our “edifice of liberty and equal rights” is to enshrine reverence for the rule of law in the hearts of the citizens. "Let reverence for the laws,” he implored, “be breathed by every American mother ... let it be taught in schools, in seminaries, and in colleges; let it be written in Primers, spelling books, and in Almanacs — let it be preached from the pulpit, proclaimed in legislative halls, and enforced in courts of justice.” And, Lincoln concluded, “let it become the political religion of the nation; and let the old and the young, the rich and the poor, the grave and the gay of all sexes and tongues, and colors and conditions” keep the rule of law.

I'm sure that Trump and his warriors had a good laugh when they heard that.

House Intelligence Committee Chair Devin Nunes, R-Calif., must have been upset that Trump didn't mention him as one of his top lieutenants. After all, Nunes was caught red-handed conspiring with the White House and blatantly lying to the public about it -- but just ignored the criticism and kept right on going. He is certainly not overly endowed with "wisdom and self-restraint." Nunes has now upped the ante on this Rosenstein impeachment business by suggesting that he may cite Attorney General Jeff Sessions with contempt of Congress. Why? Because Sessions is actually following DOJ guidelines and refusing to turn over classified evidence in a counterintelligence investigation to people who have demonstrated that they are accomplices in the cover-up of the crime.

Nunes told "Fox & Friends" on Sunday that he was dead serious about going after Sessions, and according to CNN, his committee may hold a vote on it this week. Since Sessions has recused himself from the Russia investigation he seems an odd target, but perhaps Nunes felt he needed to go above Rosenstein to get Trump's attention. On Monday night when the congressman was asked about his threat, he told reporters, "It wasn't a threat, it's what's going to happen," which are the kind of fighting words the president likes to hear from his warriors.

White House congressional liaison Mark Short told CNN in no uncertain terms, "I think we are supportive of our Cabinet." Paul Ryan was his usual bucket of lukewarm water. But close observers see both the move to impeach Rosenstein and the contempt citation against Sessions as possible pretexts for Trump to fire both of them. Why?  For disrespecting the Constitution and the rule of law.

And yes, irony is dead.

A party that feeds on hatred