The Grifter in Chief has an administration full of thieves, fixers and money grubbers

Now more than ever, the “lobby bar” at the Trump International Hotel is the favorite hang-out of lobbyists & fixers 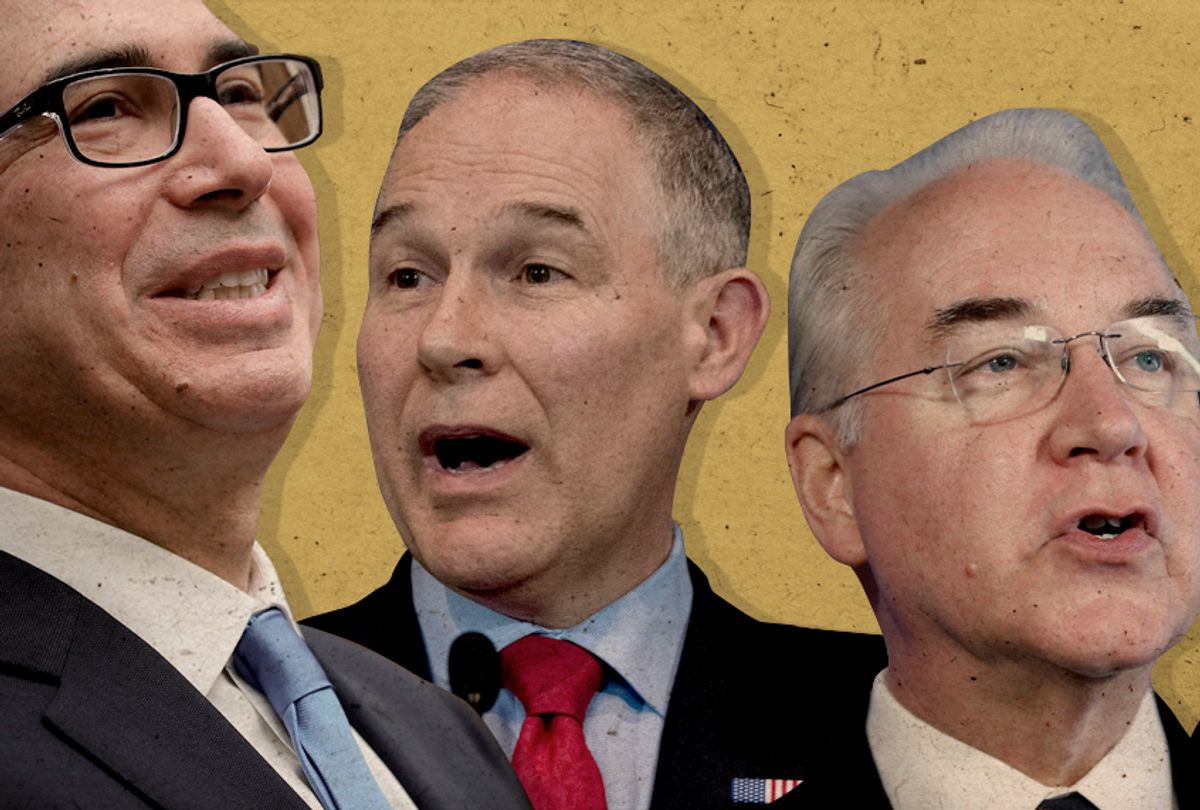 Have you taken a flight and had a look at the accommodations in first class? These days, many of the major airlines are featuring what they call “suites.” These are comfy spaces with lie-flat seats that convert into beds, in walled-off enclosures with sliding doors and private 20-inch screens featuring the latest in first-run movies, television series and other video delights. Not to mention culinary selections from celebrity chefs including caviar, Dom Perignon champagne, and a night-night service where flight attendants make up your bed, help you with your airline-branded jammies and tuck in your down-filled comforter so you don’t get a chill.

If you took a long-haul flight to North Africa or Rome recently, you might have run into Environmental Protection Administrator Scott Pruitt up there in first class, because that’s where he’s been traveling on the taxpayer dime since he took office. Nothing but the best rarified air for our Scotty at 35,000 feet, while down here on earth he’s been “relaxing” the clean air standards established under the Obama administration for the rest of us.

Trump was the first president in memory to take office without divesting himself of his business assets, or at least putting them beyond reach in trust. While Trump has been taking meetings with world leaders, his sons Eric and Donald Jr. have been flying around the world making deals for the Trump Organization. He also maintained ownership of the Trump International Hotel, just down Pennsylvania Avenue from the White House, where foreign governments regularly house their diplomats and hold lavish parties, seeking to curry favor with the president. Trump makes money every time some dictator’s factotum orders room service or calls a lobbyist.

Hey! Scotty’s just slipstreaming along in the wake of the Grifter in Chief! So was former Health and Human Services Secretary Tom Price, who in the 231 days he spent in office before being unceremoniously shown the door spent over $1 million in taxpayer dollars on travel in private jets and government aircraft. Price splurged some $300,000 of those dollars on two trips on Air Force C37B aircraft, military-speak for the Gulfstream 550, a luxurious private jet often flown by corporate presidents and Hollywood studio chiefs. At least Price included his staff on his luxury trips by government Gulfstream. When our boy Scott Pruitt was up there flying first class to Rome and Morocco, his staff was stuck back in coach banging their knees on the seats in front of them.

And what a gaggle EPA Administrator Pruitt took along with him! Traveling in first class with Pruitt was his chief of security, Pasquale “Nino” Perrotta, while the other nine staffers and his security detail flew back in coach (Previous EPA administrators did not travel with their own personal security details).

But what’s a little trip to Rome or Morocco anyway, in the greater scheme of things? Pruitt’s Rome trip cost an estimated $120,000, according to documents obtained by the AP. His trip to Morocco cost at least $100,000, according to The Washington Post, including $16,217 for Pruitt’s first class airfare on Delta Airlines and $494 for a luxury hotel when he overnighted in Paris, the Champs Elysees being a regular stop on the way to Morocco, of course. Pruitt traveled with a staff of eight and his security detail on that trip, too.

None of the costs associated with any of Pruitt’s luxury travel around the world would have come to light without freedom of information requests and lawsuits filed by news outlets and other organizations. The conservative legal group Judicial Watch obtained documents showing that President Donald Trump spent $13.5 million in his first year in office on travel to his club, Mar-a-Lago in Palm Beach, Florida and his golf resort in Bedminster, New Jersey, according to CNBC.

One trip alone to Bedminster in June of last year cost $44,783. The flight cost $15,994 per hour. The Pentagon estimates that travel on Air Force One when the president is aboard costs $206,000 per hour, according to The Washington Post. As of this week, Trump has spent a total of 111 days on his golf courses, amounting to nearly one quarter of the time he has been president.

Other presidents have spent time golfing, and other cabinet secretaries have traveled to distant lands on business that was allegedly government-related. But none have scratched the golfing itch like Trump has, and cabinet secretaries in previous administrations, including those of Presidents Obama and Bush, have traveled coach on government business.

EPA Administrator Pruitt is currently facing no less than 11 investigations into his spending habits and living arrangements. The EPA inspector general and the House Oversight Committee are both investigating Pruitt’s use of government funds for first class air travel. His use of a 20-person security detail cost the taxpayers $832,000 in his first three months as the head of the agency, according to documents obtained by the AP through a freedom of information request, and is the subject of three inspector general investigations.

The Government Accountability Office and the White House Office of Management and Budget are both investigating the expenditure of $43,000 for the construction of a sound-proof booth in Pruitt’s EPA office. The House Oversight Committee and the EPA inspector general are both investigating Pruitt’s rental of a room last year in a Capitol Hill townhouse for $50 a night from a lobbyist with business before the EPA. And new questions were raised this week about Pruitt’s use of a lobbyist working for the government of Morocco to make arrangements for his trip to that country.

Secretary of the Treasury Steven Mnuchin has been keeping up with his fellow grifters, spending more than $1 million on flights on military aircraft during the last year, according to a report released by Citizens for Responsibility and Ethics and obtained by Politico. The sum includes more than $183,646 spent for a trip to the Middle East last October and more than $800,000 spent on government aircraft that was previously unreported.

It’s not just Trump’s Cabinet secretaries who are living high on governmental largess. Former Trump Campaign Manager Corey Lewandowski set up a “consulting firm” called Lewandowski Strategic Services last year and quickly signed a contract for $20,000 a month working for Community Choice Financial, a payday lender based in Ohio. Lewandowski quickly called for the firing of Richard Cordray, head of the Consumer Financial Protection Bureau, which had issued strict guidelines regulating the payday lending industry. Cordray was forced out of the CFPB three months later.

Most recently, Lewandowski showed up in Belgrade, Serbia, with two former Trump campaign aides who run Turnberry Solutions, a lobbying firm headquartered in the Capitol Hill townhouse where Lewandowski resides. Lewandowski denies any connections to Turnberry Solutions, which is named after a golf course in Scotland owned by President Trump. He also denies that he is engaged in lobbying for foreign governments, despite reports that he attempted to set up a phone call between Trump and Serbian President Aleksandar Vucic, according to sources in a Serbian opposition party cited by Mother Jones.

Lewandowski appears to have arranged a contract between the BGR Group, a lobbying firm chaired by veteran Republican political operative Ed Rogers and Poland’s state-owned arms contractor, Polska Grupa Zbrojeniowa (PGZ), a conglomerate of 60 Polish defense companies. The contract is worth $70,000 a month, according to the Daily Beast. Two months after the lobbying contract was signed, BGR Group made a subcontracting agreement with Jason Osborne, one of the two lobbyists for Turnberry Solutions, headquartered in Corey Lewandowski’s townhouse.

And then there’s Matt Schlapp, Chairman of the American Conservative Union, and his wife, Mercedes Schlapp, the director of strategic communications at the White House. These two griftoids are also making out like bandits riding on Trump’s money train. Schlapp’s political consulting and communications firm, Cove Strategies, nearly doubled its income from $600,000 a year to over $1 million after Schlapp decided to back Trump in 2016 and invited him to the annual CPAC Convention, the annual gathering of wingnuts put on by the American Conservative Union in Washington.

Schlapp and his wife were pictured on the front page of The New York Times recently in their new $3 million home in Alexandria, Virginia. The Times reported that the happy couple also owns a 30-acre vacation retreat in the Blue Ridge Mountains they call Victory Farm.

You would think that the legal difficulties of Paul Manafort, Rick Gates and Michael Flynn would have gotten the attention of the grifters, fixers and money grubbers inside and outside the Trump administration by now, but apparently not. It’s really a perfect system, isn’t it?

The favorite hang-out of lobbyists and fixers these days is the “lobby bar” at the Trump International Hotel in Washington. Conveniently, the President of the United States, who maintains ownership of the hotel while in office, pockets a percentage of every dime they spend there.