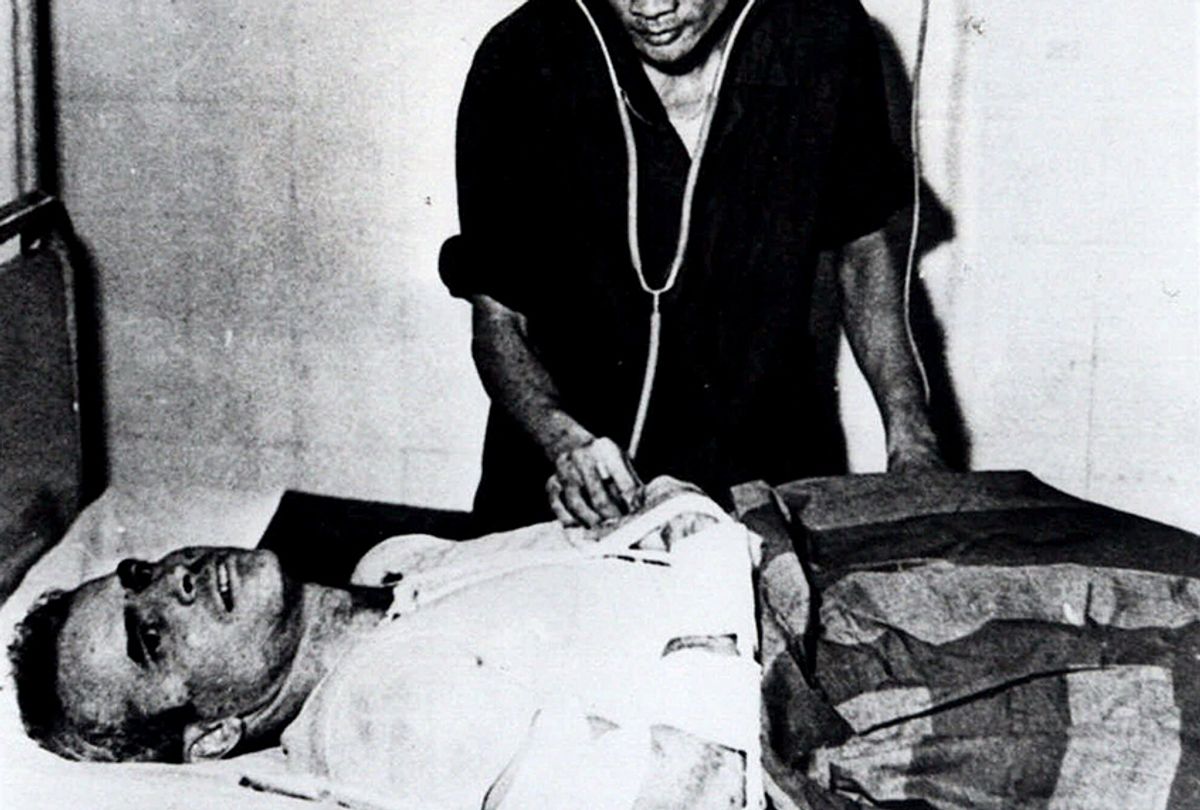 John McCain being examed in Hanoi, Vietnam hospital as a prisoner of war in the fall of 1967. (AP)
--

Sen. John McCain, R-Ariz., is taking his last stand against torture, despite being too sick to physically appear on the Senate floor.

"Today, Gina Haspel testified before the Senate and to the country about her qualifications to lead the CIA," McCain wrote in a statement on Wednesday, about the woman appointed by President Donald Trump to replace Secretary of State Mike Pompeo as Director of the Central Intelligence Agency. "This occasion provided an opportunity to provide details about her experience in the CIA, explain her involvement in the so-called enhanced interrogation program during the Bush Administration, and account for the mistakes the country made in torturing detainees held in U.S. custody after the September 11th attacks. Unfortunately, the testimony the American people heard from Ms. Haspel today failed to address these concerns."

McCain added, "Like many Americans, I understand the urgency that drove the decision to resort to so-called enhanced interrogation methods after our country was attacked. I know that those who used enhanced interrogation methods and those who approved them wanted to protect Americans from harm. I appreciate their dilemma and the strain of their duty. But as I have argued many times, the methods we employ to keep our nation safe must be as right and just as the values we aspire to live up to and promote in the world."

McCain concluded that although he respects Haspel's patriotism, her "role in overseeing the use of torture by Americans is disturbing. Her refusal to acknowledge torture’s immorality is disqualifying. I believe the Senate should exercise its duty of advice and consent and reject this nomination."

Although McCain is chairman of the Senate Armed Services Committee, he is not expected to vote on Haspel's nomination because he is being treated for brain cancer in Arizona, according to CNN. Nevertheless, because of his own background surviving torture as a Vietnam War POW, it is hardly surprising that McCain felt the need to speak out about the prospect of Haspel taking over the CIA. Although many of the details of Haspel's career with the CIA have been classified, what we do know reveals that she was involved in torturing terrorism suspects in Thailand and for trying to cover up the CIA's actions after they began to receive public scrutiny.

McCain has been a consistent opponent of torture, tracing back to when he opposed its use by President George W. Bush's administration during the war on terrorism. He has also written poignantly about his own experience of being tortured by the North Vietnamese army, exploring not only his traumatic ordeal but also the fact that his situation improved after President Richard Nixon insisted on sharing with the world how American POWs were being tortured by their captors.

I'm convinced that Hanoi hoped to win in our case by undermining morale among the people at home in America. They had to marshal world opinion on their side. I remember in 1968 or '69 [North Vietnam Premier] Pham Van Dong's speech to the National Assembly, because we were blasted with these things on the loud-speakers. The title of his address was, "The Whole World Supports Us," not, "We Have Defeated the U. S. Aggressors," or anything like that.

In 1969, after the three guys who were released went back to the U. S. and told about the brutality in the POW camps, President Nixon gave the green light to publicizing this fact. It brought a drastic change in our treatment. And I thank God for it, because if it hadn't been for that a lot of us would never have returned.

McCain's torture included being kept in solitary confinement, being subjected to regular beatings from the guards, having one of his arms that had been broken when he crash-landed re-broken and having his ribs cracked. He also suffered from sub-par medical care that damaged the ligaments in one of his knees and left him unable to raise his arms above his shoulders.

By contrast, President Donald Trump has repeatedly advocated for the use of torture by the military, despite having never served in the armed forces himself. His most notable pro-torture statement came in February 2016 when Trump insisted that torture is effective.

"Don’t tell me it doesn’t work — torture works. Half these guys [say]: ‘Torture doesn’t work.’ Believe me, it works," Trump told a political audience during the campaign.

His position is worthy of being contrasted with the one articulated by McCain in May 2011, when conservatives celebrating the assassination of Osama bin Laden began implying that so-called "enhanced interrogation" techniques may have been responsible.

"I believe that if America uses torture, it could someday result in the torture of American combatants," McCain told the Senate at the time. "Yes, I know that Al-Qaeda and other terrorist organizations do not share our scruples about the treatment of enemy combatants, and have and will continue to subject American soldiers and anyone they capture to the cruelest mistreatment imaginable. But we must bear in mind the likelihood that someday we will be involved in a more conventional war against a state and not a terrorist movement or insurgency, and be careful that we do not set a standard that another country could use to justify their mistreatment of our prisoners."

He added that "it is difficult to overstate the damage that any practice of torture or cruel, inhuman and degrading treatment by Americans does to our national character and historical reputation – to our standing as an exceptional nation among the countries of the world."

Here is the latest trending story that you can follow!