Local heroes: Newsroom rebellion at the Denver Post was about much more than one newspaper 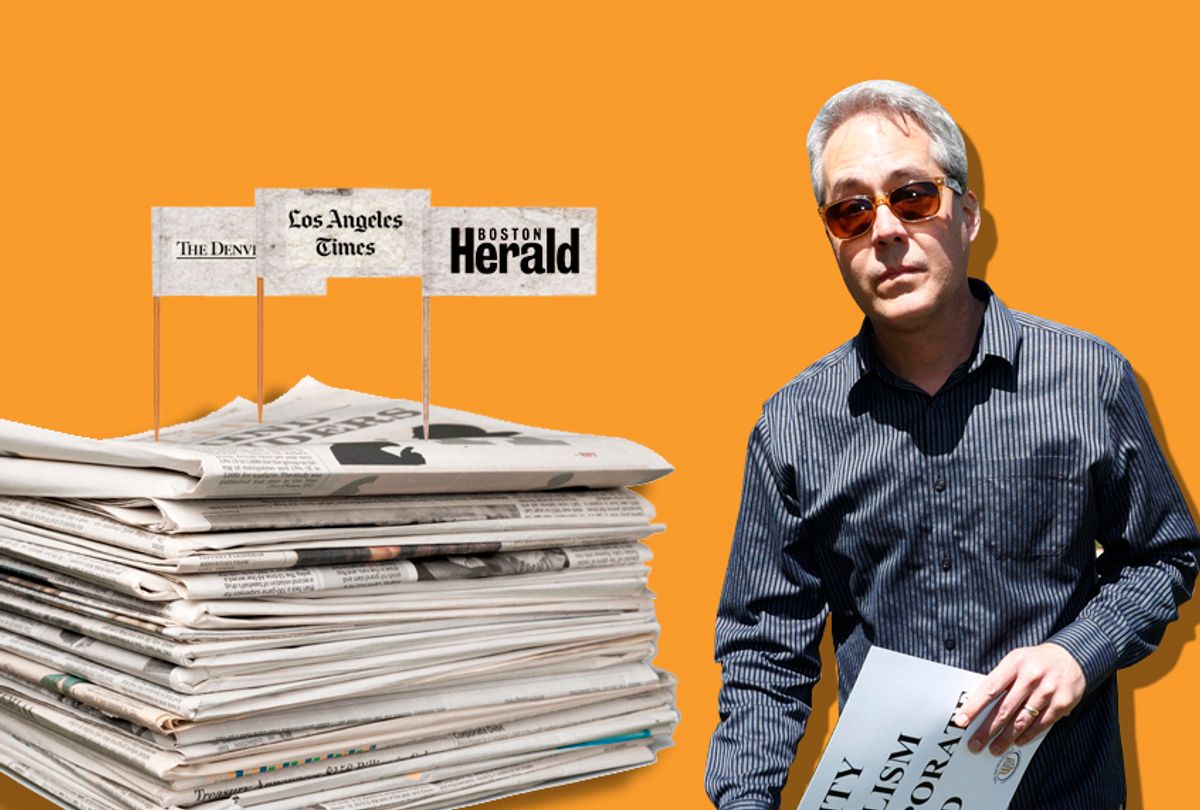 Two weeks ago, Chuck Plunkett was editorial page editor at the Denver Post, a venerable American daily newspaper whose history stretches back to 1893, when the entire population of Colorado was not quite 500,000 people. Today he’s out of work — and a lot more famous than he used to be. When I spoke to Plunkett early last week via Skype, he seemed raw and exhausted — and perhaps a bit dazed by his moment in the national spotlight. He had recently been interviewed by reporters for CNN and the New York Times, and had just published an op-ed in Rolling Stone. (The video of our full conversation is embedded below.)

Over the past six weeks or so, Plunkett and his Denver colleagues have staged something of a newsroom insurrection against the paper’s owners, a company called Digital First Media that is in turn controlled by Alden Global Capital, which Plunkett describes as a “vulture capitalist fund.” (He genuinely doesn’t seem like the kind of guy who throws around terms like that all the time.) We could also cite Washington Post columnist Margaret Sullivan, who has called Alden "one of the most ruthless of the corporate strip-miners seemingly intent on destroying local journalism."

Officially, their rebellion failed, which was no huge surprise. Plunkett and two other senior editors at the Denver Post are out, a new round of layoffs is coming, and a blanket of silence regarding corporate ownership is likely to descend not just on that paper but dozens of others owned by Alden across the country. The biggest names among those are the Boston Herald, the Orange County Register, the St. Paul Pioneer Press and the San Jose Mercury News.

To this point, no local owner has emerged in Denver with anywhere near the capital required to buy the Post from Alden -- and it's not clear that the paper is even for sale. Nonetheless, something has happened: The discussion about the fate and future of American newspapers has shifted.

Facing up to the crisis in local journalism

A similar newsroom rebellion at the Los Angeles Times forced its former corporate overlords (the villainously-named Tronc) to sell the West Coast's most prestigious paper to Patrick Soon-Shiong, an affluent local physician and investor. Editors and union leaders at various other Alden-owned papers, including the San Jose Mercury News (the chain's largest single property) and a group of four dailies in the Philadelphia suburbs, have begun actively seeking local owners.

All those papers apparently remain profitable even in their diminished circumstances -- a crucial point that owners of the Tronc/Alden ilk often seek to obscure. We'll get back to this, but the point of all the relentless cost-cutting is not so much keeping the papers afloat as maintaining the profit margin for their hedge-fund proprietors. Consequences on the ground sometimes approach the Dickensian: Reportedly the offices of the Alden paper in Trenton, New Jersey, has no hot water and is infested with rats, while the paper in Norristown, Pennsylvania, has no offices at all.

If the downward spiral of the Denver Post is depressingly familiar to everyone who follows American journalism — steep cuts in staffing, budget and coverage; out-of-town owners from the financial sector who seem to be bleeding the place dry, Tony Soprano-style — the staff’s reaction definitely wasn’t. On April 6, the Post’s editors published a remarkable package of stories bemoaning the paper’s precarious plight and directly confronting its ownership. It was fronted by an editorial headlined, “As vultures circle, The Denver Post must be saved.”

Endless and demoralizing downsizing, which had reduced the Post’s editorial staff from close to 300 people in the mid-2000s to fewer than 100 today, was making it impossible to run a “serious news operation” or fulfill a metropolitan daily’s traditional role as a “watchdog against public and private corruption,” the editors wrote. They challenged Alden to “rethink its business strategy” and told local political and civic leaders they “ought to demand better.” In the money quote, Plunkett and his posse essentially told the Manhattan hedge-fund proprietors to get out of Dodge before sundown:

Denver deserves a newspaper owner who supports its newsroom. If Alden isn’t willing to do good journalism here, it should sell The Post to owners who will.

Was all this a little melodramatic, perhaps? In an era of enormous economic and social transformation, when one of our major political parties is sliding into authoritarianism and white nationalism, and the other has literally no idea who it represents or what it stands for, is there something vainglorious about attaching so much importance to the fate of one middle-sized newspaper in one middle-sized American city?

Well, sure. But honestly, those things are connected: What has happened to American media, and America’s daily newspapers, is an important aspect of our larger story of national division and dysfunction. Furthermore, what the Post staffers did took tremendous guts. It looked to the world, and probably in Denver too, like one of those “Once more unto the breach, dear friends” moments when you decide to stand up for something important at enormous personal risk. Everybody imagines doing that at some point in our personal or professional lives; very few of us ever do it for real.

Plunkett assumed he’d be fired as soon as that package was published. He wasn’t, mostly because the Denver Post’s Don Quixote assault against its own proprietors touched a nerve — at first in the profoundly self-interested world of journalism, but then everywhere else too. Within 24 hours or so, the Denver newspaper rebellion was the subject of a front-page story in the New York Times — and suddenly Plunkett was fielding calls from reporters all over the world. Which meant that ownership’s plans to send him packing, pull down the offending stories and kill off the paper’s editorial page were rendered at least temporarily infeasible.

I asked Plunkett why he thought his newspaper’s story about itself had gone viral. Like almost everyone caught up in a media firestorm, he wasn’t quite sure. “It’s not because the world over people love the Denver Post,” he observed drily. “Some of the calls from reporters from different countries — I doubt they ever really knew there was a Denver Post before all this happened.”

It might be because Alden/Digital First owns dozens of other papers in dozens of other places and has treated them all roughly the same way, he suggested: stripping their resources, siphoning off capital and then dumping the unprofitable remnants. It might be because “people all over the country have seen the quality of local journalism diminish,” Plunkett said, resulting in an increasingly barren landscape of what media scholar Penelope Muse Abernathy calls “news deserts” and “ghost newspapers.” (The former term refers to communities that no longer have reliable sources of local news; the latter to once-independent papers that now exist in name only, as inserts or advertorial conduits — see the Oakland Tribune or the Chapel Hill News.)

Those are observable and important facts, things a longtime newspaper editor is trained to recognize. But I'm not sure they explain the worldwide resonance of this story. I suspect Plunkett got closer to the mark when he started to talk about emotion -- about the anger and sorrow and sadness that people in Denver (and many other places) feel as they watch a once-beloved local paper dwindle inexplicably toward what seems an inevitable demise. As the April editorial Plunkett co-authored concludes, “The smart money is that in a few years The Denver Post will be rotting bones. And a major city in an important political region will find itself without a newspaper.”

Why do I say “inexplicably,” you ask? Isn’t all this just the invisible hand of the market, punishing bloated “old media” dinosaurs that weren’t agile enough to adjust to the invigorating challenges of the Information Age? Well, Plunkett says he used to believe that too.

For years, a lot of us here believed — I fully believed -- that it was a matter of market forces, and that we weren’t savvy enough or swift enough to figure out how to reinvent ourselves. That was the problem. Also, after so many decades of lots and lots of profit in a newsroom, you inevitably have sloth. So at first when the cuts were coming, it seemed like we were getting lean and mean, ready to position ourselves for the future. We were going to train ourselves to be digital first and master social media — do all the kinds of things that were supposed to work.

Then we start to find out that our company is making 20 percent profit, year after year, and the cuts are designed to keep that 20 percent. National media experts … have managed to get into some insider financial information, and the belief is that Alden is just planning to continue reaping the profits it can, 20 percent a year for three or four more years, and then sell us for parts.

So yes, Ayn Rand fans, this is the market at work — in the sense that predators like Alden Global Capital took advantage of market conditions to buy papers like the Denver Post at discount prices and bleed them dry. Versions of that story have already played out to the end at several now-defunct Alden papers in California, including the aforementioned Oakland Tribune -- which I grew up reading, and was published every single day from 1874 to 2016 -- the San Joaquin Herald and the San Mateo Times.

What Plunkett and his colleagues were protesting when they gave the middle finger to their bosses, whether they fully understood it or not, was something much bigger than the decline of local news or the likely demise of yet another once-prestigious American newspaper. It was the bigness of the gesture, and of the target, that captured the world’s imagination. In Plunkett’s words, this was about the “rapacious greed” of top executives at hedge-fund outfits like Alden, who place “the shortsighted service of obscene profit-taking” above all other possible values. But it was also about a society where those things have become normal and natural.

It wasn’t a protest against capitalism as such, which in fairness had supported daily journalism well enough for decades. It wasn’t a “political” protest, in the normal, partisan sense of that word, because the spirit of outrage against injustice at work here transcends conventional notions of left or right. It was a protest against a specific, ruthless and zero-sum version of capitalism. It was a protest against the relentless financialization of American life, which cannot conceive a reason not to maximize leverage, maximize returns and maximize inequality, and cannot perceive human or spiritual or social costs that aren't captured on a spreadsheet.

What did this protest accomplish? Maybe not much: Chuck Plunkett stayed at the Denver Post another few weeks. He tried to write another editorial about the paper's plight for last Sunday's edition. Ownership killed it, and he finally quit. The Post will keep on shrinking, possibly all the way down to nothing. Given all that, Plunkett's Rolling Stone op-ed was tinged with despair. But by the time I talked to him, he had begun to consider the whole affair in a different light. I told him that I thought he was a hero of journalism. He said what actual heroes usually say: He was just doing his job.