After the Iran deal: A foreign policy built on arrogance, ignorance and sheer desperation

American foreign policy has long trended toward dark places. Under this administration, that has accelerated 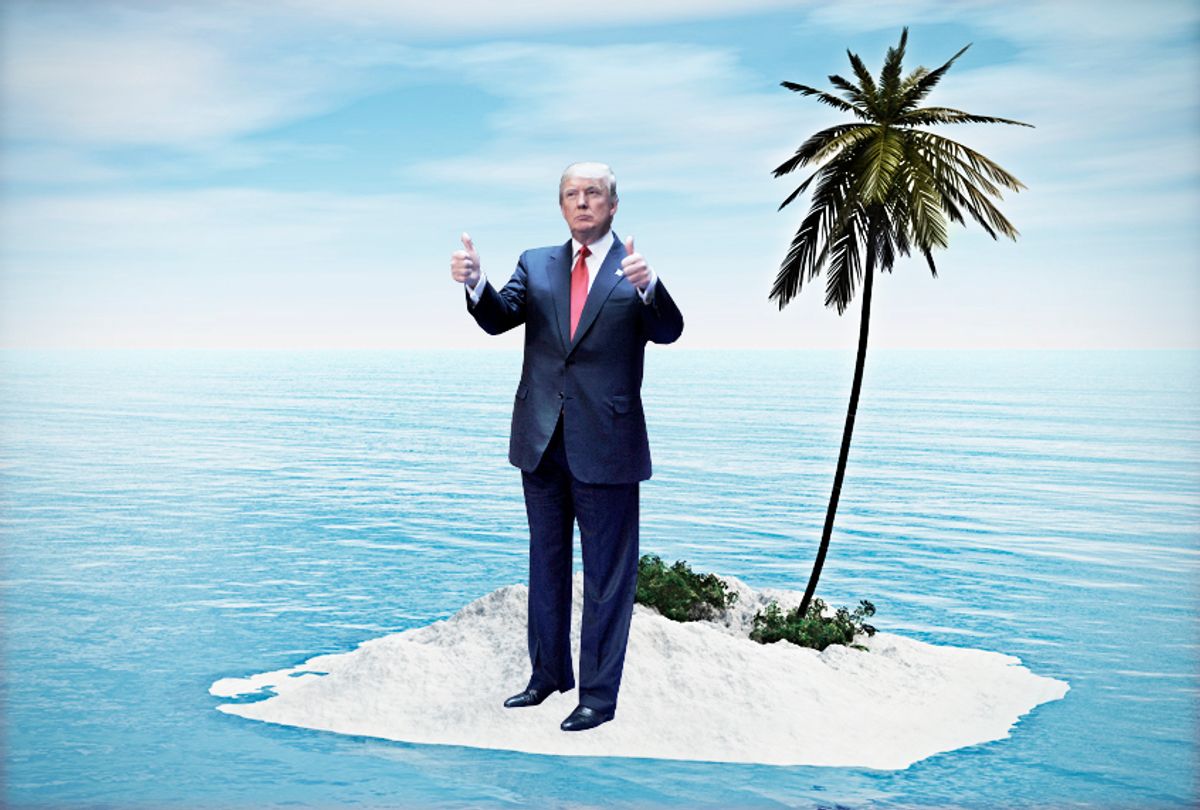 I am with Craig Murray now that the Trump administration has determined to scuttle the accord governing Iran’s nuclear programs. “This moment will be seen by historians as a key marker in U.S. decline as a world power,” the former British diplomat wrote the day after the White House announcement. I am with the friend who sent a note after the Senate hearings Wednesday on Gina Haspel’s nomination as director of the CIA: “I think this might lead to some careful re-evaluation as to how one continues to think of the dear old US of A.”

It is hard to think of anything other than the dear old US of A at this moment, however much one may want to think about an infinitude of other things: The complacency of American life begins to assume a pitiful triviality — providing one is sentient, has a conscience and is not paid to think in conformity with orthodoxy. America has long headed for trouble, of course. Last week it took a very steep step further down into it. It is getting too dark to see a way out of this.

I write this not only in response to the detonation of the agreement with Iran, unconscionable as this is. Did you see the video taken as police dragged Ray McGovern, the truth-telling former spook, from the Haspel hearings Wednesday, the day after the Iran announcement? It is shameful. But it is not the thought of a torturer in high office, either.

As of last week, Washington has assembled a considerable list of dangers and disasters, and they are of a piece. I propose we look at them this way, for it is this larger context we have to think about. The Trump administration now has a clear foreign policy, all fleshed out to see. It may be shaped by the president, or the president may be the ventriloquist’s dummy of his minders. This remains hard to discern. But either way, it comes to this: America grows ever more indifferent to alliances other than those dependent on a common adversary. Friendships with other nations seem no longer to matter, or even whether America is admired or respected. All signs indicate we now enter that late-imperial phase when power alone, raw power, is all we have to show the world.

In last week’s column I suggested American foreign policy has lately assumed the markings of desperation. That is a strong word, but it seems more to the point now than it did even seven days ago. In love, politics, diplomacy, war and much else, a lot of destruction is wreaked when the desperate are defending themselves at a late stage in their time. Brace yourselves. The worst is yet to come.

Here is what Washington got us into last week:

Given this swift succession of moves and the rhetoric coming out of Washington, it seemed plain by week’s end that wrecking the accord is probably the first step in yet another coup operation. (I refuse the euphemistically genteel “regime change,” although even Iranians now use it.) This augurs very ill. Americans have never understood and Bibi Netanyahu’s Israel has never cared: Iran is neither a flimsy banana republic nor a nation drawn on colonial maps a century back. It is an old civilization with a markedly profound identity, and it takes vigorous pride in its sovereignty. A coup operation — or a provoked conflict, worse — is certain to result in costly failure.

Haspel’s confirmation as CIA director, now all but assured, completes what is effectively a kind of war cabinet, the chief members of which are John Bolton, the new national security adviser, and Secretary of State Mike Pompeo. Widen the definition of war and you can include Commerce Secretary Wilbur Ross. It is true that Defense Secretary Jim Mattis looks like reason made flesh in this scrum of provincials and ignoramuses. But this is merely because, as a retired general, Mattis favors wars he is certain of winning, and there are not many of those around just now. If there were he would fight them.

This has been going on since the late Hugo Chávez was first elected 20 years ago: International observers certify elections, Washington denounces them, and then the U.S. imposes a set of sanctions. Sure enough, Pence announced new sanctions (against an assortment of Venezuelan companies and individuals) when he addressed the OAS last Monday. If you wonder how much this has to do with democracy, put the Venezuelan record against that of Honduras. In the latter case, Washington immediately recognized the rightist Juan Orlando Hernández after he defended his incumbency in grossly fraudulent elections late last year. Pence, he of ostentatious rectitude, just added to what has long amounted to a slo-mo coup in Latin America.

It goes on from there. To satisfy the U.S., China has to remove all industry subsidies — a demand that amounts to scrapping its economic model. China must stop complaining about the U.S. to the World Trade Organization. Whatever the U.S. may do by way of tariffs or other restrictions, China must pledge not to retaliate. And so on. Martin Wolf, the Financial Times' longtime economics commentator, published an excellent column on this last week. “No great sovereign power could accept such a humiliation,” Wolf writes of the U.S. document. “For China, it would be a modern version of the ‘unequal treaties’ of the 19th century.”

Just the thing: Aggress against the world’s second-largest economy, soon enough the largest, while your own share of global GDP and trade is shrinking. As Wolf neatly put it, “The U.S. administration is either so foolish it does not understand this or so arrogant it does not care.”

Some and some, I would say.

What are we watching, readers? I nearly wrote, “What is the name of this movie?” But this is not a movie. It is where America’s leadership cliques land us in the second decade of the 21st century.

Count the continents. I get four. In one case we find illegal abrogation of binding responsibilities, in one overt and covert subterfuge, also illegal, in one belligerent trade diplomacy and in the last something between indifference and the middle finger. My argument is simple: Put these together and you have a foreign policy. The Trump administration seems to rely solely on undisguised, unapologetic power.

This is a stool with only one leg, if my surmise is correct. You have to wonder why a presidential administration would choose to build such a contraption, given that stools with one leg do not do very well. I have a few thoughts. I have suggested desperation as an explanation, and I think it holds. Unaccustomed to change in the international equation for seven and some decades, the policy cliques are unpracticed in response to it. In the trans-Pacific context, Martin Wolf suggests ignorance and arrogance, and these thoughts hold, too.

I would say the privilege of arrogance, because I think privilege lies at the core of what we witness. Trump’s Washington desires the luxury of arrogance. It seeks to preserve the very thing that slips away at a pace we must all find astonishing: This is the privilege of unlimited prerogative. The project is to defend it by asserting it. It is not altogether rational in character: There is something of compulsion in it, as there is bound to be when people act on the basis of belief rather than thought.

A friend suggests: “This is ‘Make America Great Again!’ taken to its logical extreme.” That is fine, but we must be wary of isolating the compulsions driving our foreign policy in the Trump administration. There are marked similarities between the policies I outline and those of George W. Bush. The Obama administration gave the world Bush II with a human face. And those two presidencies were mere variants — each administration is a variant — of the threads that have run through U.S. policy since Washington formulated a modern template in the 1890s.

In historical context, then, Trump and his minders are merely accelerators. They simply etch U.S. policy and objectives more swiftly and sharply into events. This is for a simple reason: The world and its power balances are changing at precisely the pace American prerogative becomes a privilege of the past.

What about Trump’s imminent summit with Kim Jong Un? This is a good question. The U.S. and North Korean presidents are now scheduled to meet June 12 in Singapore, and both sides express high hopes for a diplomatic breakthrough.

I have such hopes, too. But against the background of the past week’s events, I am moving my money from a chance of success above 50 percent to something on the other side of the green felt table. I will keep a saver on a good outcome, but in my expectation the U.S. will prove the spoiler in the Korean rapprochement. The pace of events in Northeast Asia obliges Washington to go along; hardly could it refuse to talk at this point. But its focus is on denuclearization and total, complete, absolute, incontrovertible, irreversible, eternal verification and like technicalities to the exclusion of other considerations, chiefly a peace treaty formally ending the Korean War and diplomatic recognition. This gives the game away, in my view. It is likely the U.S. intends to scotch the Korean undertaking on the ground of one or another of the particulars relating to the nuclear program.

This will create an interesting situation. The Asians will be in the same position as the Europeans are now: They can cave to American compulsions or begin to go their own way. This is the Trump administration’s gamble. It is a moment of truth across both oceans.

My call: The Europeans will capitulate, folding their efforts to develop relations with Iran. But this does not mean the breach over the Iran accord will not take its place as an inflection point “in U.S. decline as a world power,” as Craig Murray puts it. It will, the cowardice likely to come in European capitals notwithstanding. Murray relies on future historians to see better than most of us can. So do I.

The Asians, on the other hand, are more likely to persist in the face of American spoilage. This is my read, assuming Washington indeed scuttles a Korean resolution as it has the Iran agreement. Asians have less need to conform to what the U.S. advances as “norms.” They seem to know the score better than the Western powers precisely because they are non-Western. They forget nothing and read history well. They know what time it is. This is emphatically so in the Chinese case, as we will shortly see on the trade side. But even the South Koreans — and this is part of what is special about Moon Jae-in, their president — appear ready to escape Washington’s suffocating embrace after 70 years of it.

One final point. That video of Washington police wrestling Ray McGovern to the floor. I find it hard to sit still while watching it. It is not just the spectacle of a gaggle of cops yanking a 79-year-old with a dislocated shoulder into handcuffs. It is that Uncle Ray was all alone. Where is everybody? The cops kept shouting at McGovern, “Stop resisting! Stop resisting!” What a line. Most of us got that done a long time ago.

Protests in Iran: What Is America's role?

What can the U.S. and other outsiders do to support human rights in Iran?