After savoring the tart delights of "Downton Abbey," how can we go back to starched style of "Masterpiece"? 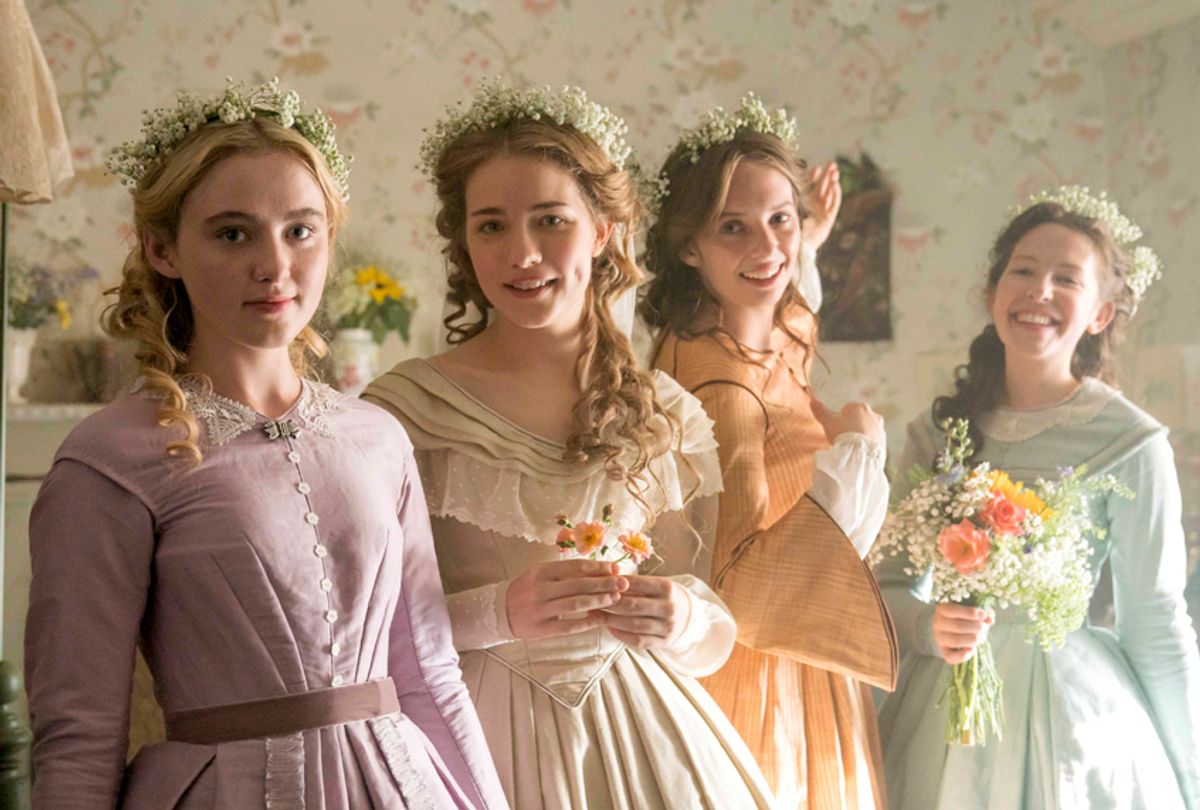 Kathryn Newton as Amy, Willa Fitzgerald as Meg, Maya Hawke as Jo, and Annes Elwy as Beth on "Little Women" Little Women has been commissioned by Piers Wenger and Charlotte Moore at the BBC, and is produced by Playground (Wolf Hall, Howards End) for BBC One. The series is a co-production with MASTERPIECE on PBS. The producer is Susie Liggat. Executive producers are Colin Callender and Sophie Gardiner for Playground, Heidi Thomas, Lucy Richer for the BBC and Rebecca Eaton for Masterpiece. Lionsgate will manage worldwide distribution excluding US and UK. Photo courtesy of MASTERPIECE on PBS, BBC and Playground. (Courtesy of Masterpiece on PBS, BBC and Playground)
--

Midway through the first hour of PBS’s “Little Women,” my husband turned to me and asked when the handsome and mysterious drifter was going to show up.

To be clear, he didn’t want something terrible or ribald to happen to the March sisters. He merely wanted to know if there was a point to devoting three hours of time to this literary adaptation, the first hour of which premieres Sunday at 8 p.m. on "Masterpiece." (The concluding two hours air May 20, also beginning at 8 p.m.)

I explained to him that Louisa May Alcott’s 1868 novel had no such twists — no outside threats, no piquant, torrid romances, no spikes of heart-pounding anxiety or excitement. The main threat is an outbreak of scarlet fever. At this his face slackened into a puddle of bewilderment as he quietly muttered, “I’m just not sure why I’m watching this.”

Lots of people will be asking themselves that question, I suspect, even those who adore Alcott’s tale. The roots of that love reach deep, but even that level of affection may not be enough to triumph over the emotional aridity of this new "Masterpiece" production.

The challenges screenwriter Heidi Thomas and director Vanessa Caswill face in updating “Little Women” for 2018 are multifold. First, Alcott’s creation is so timeless that the story has been adapted for film and television screens numerous times already, although not lately.

Gillian Armstrong’s 1994 production with Winona Ryder, Susan Sarandon and Christian Bale (!) as Laurie, the prototypical guy who gets friend-zoned, is the novel’s most recent cinematic take. But in the quarter century that has passed since the release of that work and this one, our expectations of what a period piece can or should look like have drastically changed.

Simply put, we’ve been primed to expect something to happen in such stories.

“Downton Abbey,” a drama borne on cumulus clouds of etiquette and fantastic, glittering refinement, brought in problems straightaway in the form of the seductive Mr. Pamuk. Hence my husband’s assumption that, following the girls’ whinging about an impoverished Christmas, some guy that looks like Colin Farrell would show up at the door and, you know, mix things up.

Then again, neither are they set upon by zombies, a la “Pride and Prejudice and Zombies,” or made to dodge vampires hunted by Abraham Lincoln. I’m not being entirely ridiculous in citing those titles, given how popular twisting literary greats proved to be only recently. “Little Women” itself wasn’t immune to that craze. Only three years ago, The CW was developing this grim, millennial-targeted take on the story:

“…disparate half-sisters Jo, Meg, Beth, and Amy band together in order to survive the dystopic streets of Philadelphia and unravel a conspiracy that stretches far beyond anything they have ever imagined -- all while trying not to kill each other in the process.”

Even in that version, as in all others, everyone would envision themselves as a Jo.

At different points in cinematic history the independent, ambitious protagonist of “Little Women has been played by trendsetting women of a given era, Winona Ryder and Katharine Hepburn among them. Maya Hawke, the daughter of Uma Thurman and Ethan Hawke, brings Jo to life in this new production's version of 19th-century Massachusetts, a place far removed from the grime and peril of the Civil War.

Hawke commands the focus of the story quite ably. Sometimes, actually, her Jo outshines the other March girls sharing scenes with her, particularly Willa Fitzgerald’s graceful and confident Meg and Annes Elwy’s frail and retreating Beth. This is less excusable for Fitzgerald’s society butterfly than Elwy’s shy heroine, even if Beth is in one key respect the heart and soul of the piece.

In contrast, Kathryn Newton, cast as the self-involved and bratty Amy, holds her own. She’s the second-strongest performer in the cast after Angela Lansbury, pitch-perfect as the high-handed Aunt March, a mistress of caustic wit and spiritual sister to the dowager Countess of “Downton.” Declaring Lansbury to be a revelation is like informing you that the sky is blue: the woman elevates everything she does, and her work in this “Little Women” is evidence of that.

Less impressive, though not for lack of talent, is Emily Watson’s Marmee, written as a matriarch who allows her girls space to blossom into their individual personalities but realized here almost as auxiliary to the action. Their neighbor Laurie (Jonah Hauer-King), grandson to the wealthy Mr. Laurence (Michael Gambon, who is barely there), soon becomes Jo’s bosom confidante and the source of romantic competition, though muted between her and Amy.

With the family patriarch (Dylan Baker) tending to soldiers on the front lines, Marmee and the girls are said to barely be getting by. Yet their dresses are smart and they have a servant; they’re not stuffed into a crumbling cabin and they can afford to blow the occasional quarter on pickled limes.

The visual demarcations of social and economic status aren’t particularly obvious, save for Aunt March’s ostentatiously decorated parlor and her overly familiar parrot; a scene where the bird chomps on Amy’s bow is a rare entertainment.

Beyond that, and to its detriment, “Little Women” returns to the classic PBS “Masterpiece” style of being true to a piece of literature nearly to the point of drowning it in formaldehyde.

One positive note is Caswill’s cinematography, evocative of an aesthetic that resembles Hudson River School landscape art in miniature. Woefully, the action occurring within these settings is less interesting: Unless you find watching Jo, Meg and Amy change into a variety of gowns, prance between fancy parlors and poor, dilapidated homes, or run through the wintry woodlands of 19th-century Concord enticing, there’s precious little to keep a person enthralled.

Perhaps loyal “Little Women” readers would argue that Alcott’s examination of their progress from adolescence to adulthood holds its own fascination, and to those viewers the production’s close adherence to the source material could be seen as its strength. To them, Marmee being called away to care for Mr. March, leaving the girls to find their own way in the world, is all the action “Little Women” requires.

Alcott’s story is a journey of maturity, after all, one that empowers and tests the sororal bonds of the March sisters. Largely that narrative's perspective is Jo’s. Admirably, Thomas has written a script that allows room for Meg, Amy and even poor Beth to stand out as individuals finding their own way within a world where their choices are limited and prescribed for them. Jo defies these notions; that’s why so many love her.

But after about an hour of “Little Women” you may hanker for a refreshed view of this bygone era akin to what Julian Fellowes achieved with “Downton.” Even the smallest refinements to Alcott’s dialogue to make it sound natural to modern ears, in the way Kenneth Lonergan finessed turn-of-the-20th-century conversation in Starz’s recent presentation of “Howards End,” would have done a service to the production without sacrificing its charm.

Worse still, and much to my spouse’s chagrin, the tale’s central non-familial relationship plays out between two actors, Hawke and Hauer-King, who have zero onscreen chemistry. Readers might excuse this, suspecting this lack of spark is intentional given how their story plays out, but it does very little to spice up the two-hour second part of the work. It’s fine that no alluring strangers show up, and maddening that none of Alcott’s uplifting zest does either.