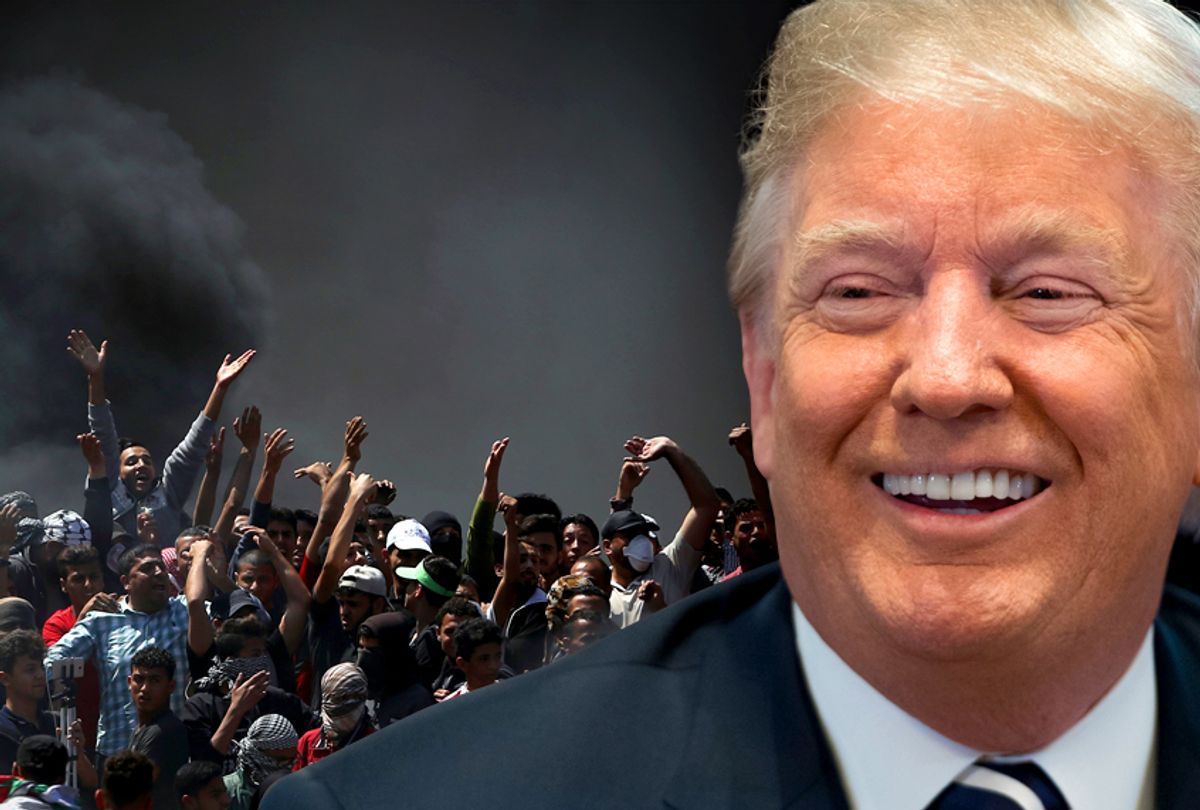 Palestinian protesters chant slogans as they burn tires during a protest on the Gaza Strip's border with Israel as Israel prepares for the inauguration of a new U.S. Embassy in Jerusalem. (Getty/Saul Loeb/AP/Khalil Hamra)
--

Days of violent clashes at the border fence separating the Gaza Strip from Israel escalated just as Trump's daughter Ivanka, son-in-law Jared Kushner and Secretary of the Treasury Steven Mnuchin attended ceremonies to celebrate the opening of the Jerusalem embassy. They were joined by prominent Republican supporters of Israel: Sens. Lindsey Graham of South Carolina, Ted Cruz of Texas, Mike Lee of Utah and Dean Heller of Nevada.

Yet as America's Republican Party elite were celebrating, 41 Palestinians were being killed by Israeli soldiers as they protested at the border fence separating Israel from the Gaza Strip, according to The Washington Post. An additional 1,600 Palestinians were wounded, contributing to the bloodiest day that Israel has seen since the war in 2014.

"It was inevitable that the capital of Israel would be moved to Jerusalem," Will Marshall, president of the centrist Progressive Policy Institute, told Salon. "It was really only a question of on what terms, because this was an integral part of the negotiations between Palestinians and Israelis presumably aimed at a two-state solution. Unfortunately, the negotiations have utterly broken down and been going nowhere for years. There has been a massive withdrawal of confidence on both sides in the old peace process. It's hard to argue that this move scuttles a process that's been moribund for years."

He added, "On the other hand, it is reasonable to ask why the Trump administration gave up leverage in dealing with Israel without getting anything in return. This is something that Israel badly wanted and, again, it was a counter in the trading, the political horse-trading, with the Palestinians, and having sort of given it away and extracted no concessions in return would ordinarily have been a big policy mistake. But again that presupposes an effective peace process, which unfortunately we just don't have."

Trump himself, of course, has touted his decision to move America's Israeli embassy to Jerusalem as a great achievement of his administration.

Not all Republicans were backing Trump, however, even those who may otherwise support moving the embassy to Jerusalem.

"Robert Jeffress says 'you can’t be saved by being a Jew,' and 'Mormonism is a heresy from the pit of hell,'" Romney wrote on Twitter. "He’s said the same about Islam. Such a religious bigot should not be giving the prayer that opens the United States Embassy in Jerusalem."

Just as not every American criticizing Trump's actions did so on the grounds that they opposed moving the embassy, so too were the Palestinian protests not entirely about the moving of America's embassy from Tel Aviv to Jerusalem, according to the BBC. Palestinians have also held weekly protests as the 70th anniversary of Israel's formation, which they refer to as the Nakba (Catastrophe), approaches. When the Jewish State was founded on May 14, 1948, thousands of Palestinians either fled their homes or were displaced, an event that Palestinian leaders claim was responsible for the large Palestinian refugee community that exists today. As the BBC reported, Palestinians also became violent during the protests on Monday:

The Hamas-run health ministry said children were among those killed on Monday.

The mass demonstrations, led by Gaza's Islamist rulers, Hamas, are part of a six-week protest dubbed the "Great March of Return".

Israel's army said 35,000 Palestinians were taking part in "violent riots" along the security fence and that its troops were operating "in accordance with standard procedures".

Israel says the protests are aimed at breaching the border and attacking Israeli communities nearby.

"I think we are in a critical moment where the Palestinians are simply divided," Marshall told Salon. "They have old creaky leadership and they are addicted to a strategy that can't prevail, that is simply trying to pressure Israel into giving them what they want. They're going to have to bargain! And the problem is Hamas won't bargain. The Palestinian Authority in the West Bank will, but again the leadership is old and lacking in imagination. So I think there will have to be a change in leadership on both sides before we see something. There need to be leaders on both sides who actually want a political resolution, because right now we don't have that on either side."

Marshall's explanation was echoed in a recent editorial by Rick Noack in The Washington Post:

There are many reasons a “two state solution” has so far failed, including reluctance on both sides to pursue talks. Wars between Israel and Hamas — the organization in control of Gaza that has been branded a terrorist group by the United States — have sown deep mistrust and created open hostility.

Under international law, the settlements are deemed illegal and have drawn repeated criticism from the European Union and other governments. The Israeli government has nevertheless continued their expansion.

Whereas previous U.S. administrations opposed the expansion of Israeli settlements, Trump has been far vaguer. In February, he acknowledged that they could “complicate” the peace process. The leader of the Israeli settlers, however, has credited Trump for creating a “friendly new atmosphere conducive to settlement growth,” according to the Israeli newspaper Haaretz.

If nothing else, the news of the day demonstrates that – while Trump may not be the sole cause of today's outburst of violence — his decision to move America's embassy to Jerusalem threw a match on existing gasoline. It remains to be seen if he and Israeli Prime Minister Benjamin Netanyahu have any plan for putting it out . . . or even want to do so.

Trump's "Mideast peace" is a joke