20 states have already introduced legislation to cash in 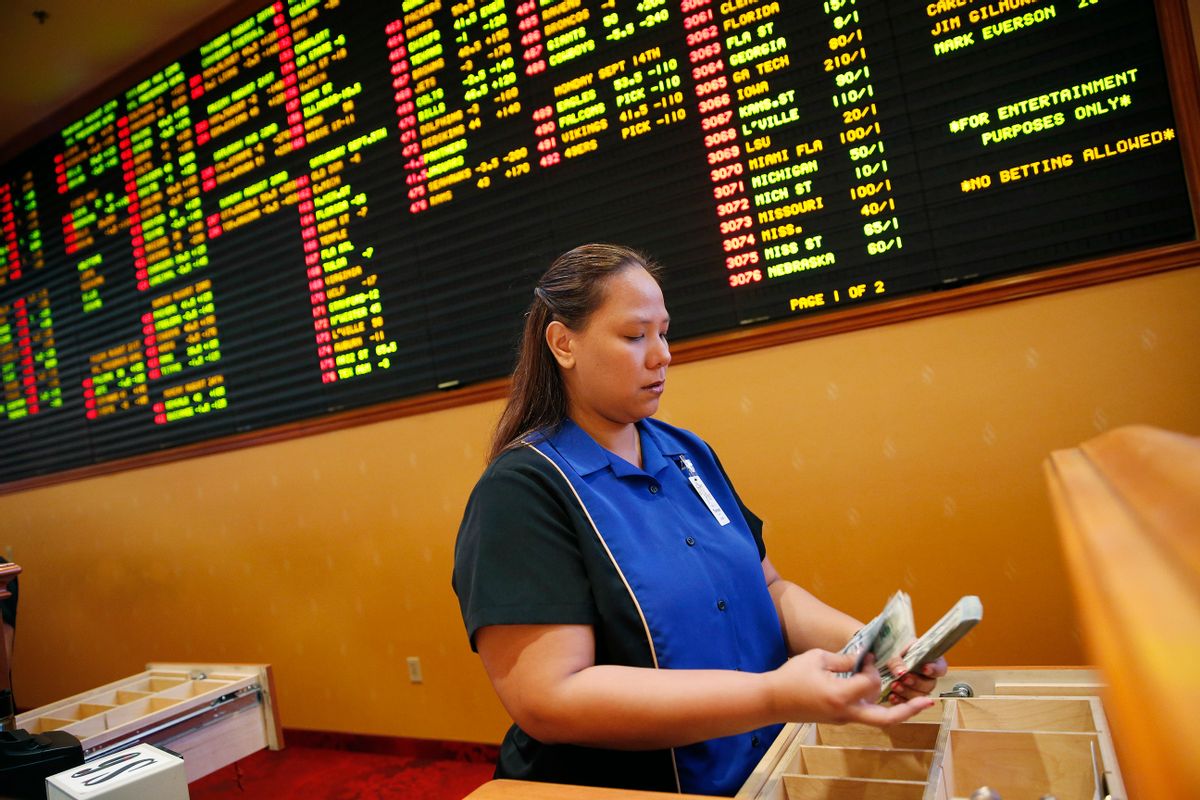 FILE - In this Aug. 20, 2015, file photo, Therese Duenas counts money as she takes bets in the sports book at the South Point hotel and casino in Las Vegas. On the board behind here are odds on NFL football and other bets. Once upon a time, the thought of gambling on a pro football game brought gasps of indignation from the NFL offices. And swift action if it was a player who actually placed a bet. The Oakland Raiders’ new stadium could literally be walking distance from a few of the city’s dozens of sports books. (AP Photo/John Locher, File) (AP)
--

It’s game on for the race to cash in on sports betting.

The U.S. Supreme Court sided Monday with New Jersey in its six-year quest to allow legalized sports betting, breaking up Nevada's near-monopoly in the market and paving the way for other states to break into the billion-dollar business.

In the lead-up to Monday’s decision, five states — Connecticut, Mississippi, New York, Pennsylvania, West Virginia — along with New Jersey had already passed legislation to allow legalized sports betting, contingent on the Supreme Court’s favorable ruling. Similar bills have also been introduced in 14 other states nationwide since the beginning of 2017, according to a Center for Public Integrity review. The bills either explicitly allow legalized sports gambling or lift any prohibitions against it.

Now, with the green light, more states will likely join in. Gambling Compliance, a trade publication, expects that up to 37 states will eventually legalize sports betting and reap potential tax benefits.

Those efforts, in turn, will attract interest from gambling companies and even the major sports leagues themselves in influencing the nitty gritty details, a tried-and-true playbook that is followed in statehouses around the nation through campaign donations, wining-and-dining by lobbyists and model legislation handed out by special interests.

Major League Baseball and the National Basketball Association will likely step up their lobbying efforts — already underway in a number of statehouses across the country — to have a say in how sports betting is legalized. Most notably, the two leagues are looking to get a cut from the profits in the form of “integrity fees” of up to 1 percent of all wagers placed on their games. Such fees, the argument goes, would help the leagues police against efforts to sway the outcomes of games.

Marc Edelman, a law professor at the City University of New York's Baruch College, expects other professional leagues to join in the lobbying efforts.

“If you listen carefully to the language that has come out from the sports commissioners, especially the NBA and Major League Baseball commissioners, it is clear that they are no longer opposed as a matter of public policy to sports gambling as long as they could profit from it,” said Edelman, who specializes in the business side of sports. “So it seems almost inevitable that the pro leagues will step up their efforts to try to lobby for a share of the sports revenues.”

In Monday’s 6-3 decision, the Supreme Court struck down the Professional and Amateur Sports Protection Act, a 1992 federal law that banned any state outside of Nevada and a handful of other states to “sponsor, operate, advertise, promote, license, or authorize” sports betting. New Jersey had petitioned the court against the wishes of the NCAA, the NBA, MLB, NHL and the NFL.

At issue was whether Congress had violated the “anti-commandeering” clause of the 10th Amendment that guarantees states’ rights.

Writing for the majority, Justice Samuel Alito was emphatic: “Congress can regulate sports gambling directly, but if it elects not to do so, each State is free to act on its own,” he wrote. “Our job is to interpret the law Congress has enacted and decide whether it is consistent with the Constitution. PASPA is not. PASPA ‘regulate[s] state governments’ regulation’ of their citizens. … The Constitution gives Congress no such power.”

Former New Jersey Gov. Chris Christie hailed the decision, declaring that it was “a great day for the rights of states and their people to make their own decisions.”

“New Jersey citizens wanted sports gambling and the federal Gov't had no right to tell them no,” tweeted Christie, a Republican who signed the state’s first sports betting law in 2012. “The Supreme Court agrees with us today. I am proud to have fought for the rights of the people of NJ.”

This story is from The Center for Public Integrity, a nonprofit, nonpartisan investigative media organization in Washington, D.C. Read more of its investigations on the influence of money in politics or follow it on Twitter.