"Deadpool 2" director David Leitch on his hero's humanity: "We go for personal stakes" 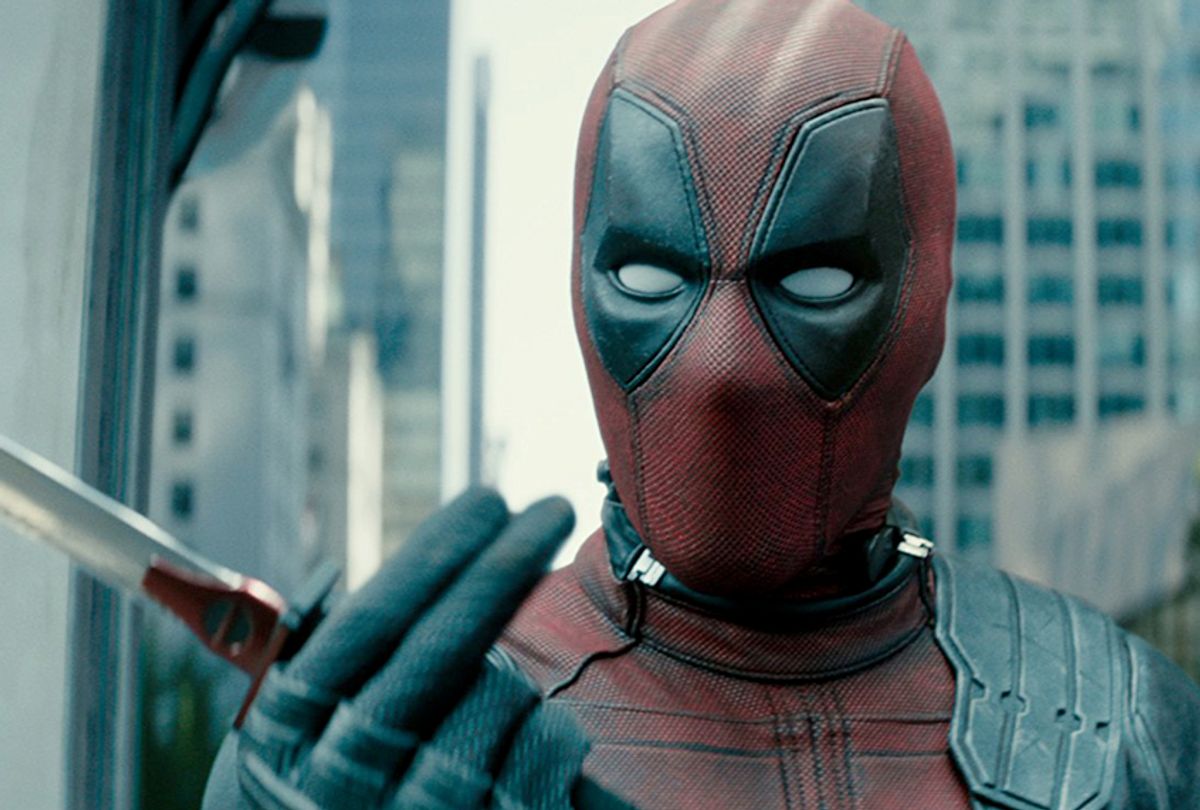 "Deadpool," the irreverent superhero flick starring Ryan Reynolds in the title role, was a surprise blockbuster hit in 2016, becoming the highest-grossing R-rated movie of all time. "Deadpool 2," opens to similar hopes this weekend. We welcomed "Deadpool 2" director David Leitch to the Salon Talks studio earlier this week, where he broke down Deadpool's audience appeal and how he maintained a balance of comic and emotional moments in this highly-anticipated sequel.

You were brought in to replace the director from the first movie, Tim Miller. What did the team working on this, especially Ryan Reynolds, feel that you were going to bring to this film?

So he hasn't told you?

No. He's, like, they just threw a dart at a board of directors, and I got lucky. No, I think that there's obviously a certain sensibility in the films that I do that have the action, the grounded action was interesting to them. I was also developing a property with them, at the time and so we had a rapport when this became available. So there was a lot of common ground, and I think there was a sensibility.

When I was offered the job, taking on a sequel is — of something so beloved, as the first "Deadpool" is — a really, sort of a daunting task. The expectation is so high, that I really had to have a gut check and decide if it's something that I wanted to do. After having conversations with Ryan, and the writers, and the producers, I started to see where they wanted to take it. I really understood there was a way to make this my own, but stay true to the original. You know, have a core emotional story, have some irreverent comedy, but still make it my own, and I think we did that. I think it's additive to the film.

A Salon Talks conversation with the director of "Deadpool 2"

You got your work start as a stunt double and a stunt coordinator, but you've directed movies, like "Atomic Blonde" and some of "John Wick." What do you think that your background in stunts brings to your work as a director?

I would say, also, just being in the trenches in a film set for 20 years before stepping into the director's chair, it just gives you a real working knowledge of the logistics of making a movie. It's just an invaluable experience that a lot of directors don't get to have. You come out of film school and you're in the director's chair as a filmmaker [instead].

That's one point of view. I mean I came [up as] sort of a journeyman, stuntman, stunt coordinator, second unit director. I've mentored under great people. I've seen where they succeeded, and where they failed, and lessons learned. It's so invaluable that I had the experience, to be here now, with all the knowledge of 20 years of film behind me.

Speaking of the tone of the movie, just like in the first movie, there's this really, narrow tightrope. It's even narrower in this film, because it's both sentimental and goofy as hell. How did you manage to walk that line? Because it was both more than the first movie.

It is. I mean, it's heightened. My comedic sensibilities, like I can go goofy, and I could go camp. So, we can lean into those, the physical elements of the comedy. I can go hardcore Buster Keaton [or] Jackie Chan and so that totally is a bit broader than the first film.

There's two categories. [One is] the emotional arc of the movie, and Deadpool's existential crisis and what his real, emotional mission is, and what the heart of that is.

Then the subversive comedy: There's these scenes that come up and you're like, "It's a really emotional scene." And it’s like, "Are we going too melodramatic?" Where you always have the comedy to pull out the rug.

So, we would go into these scenes, and we'd always shoot a comedic out. You didn't always use the comedic out, and vice versa.

You might have a comedy scene, and you're really like, we need to learn something about the character's arc here. We need to make sure that we've seeded enough of the story in this moment, or even emotional context. Or even the joke, just for the sake of the joke, may not work. So it was a balancing act all the way to the end, I would say. Even at editorial, you're fine-tuning it.

I saw recently some critics complaining about "Avengers: Infinity War" for doing that, which is, they would have these emotional moments, [followed by] a comedic out.

Like you said, you don't do that for every emotional moment in this movie, but how do you feel about using comedy to kind of be the punctuation of an emotional scene?

It is part of the balancing act. If the movie's sort of a Jenga puzzle, it could be one time you subverted the wrong emotional moment [and] you could send the whole arc of the movie, or the character, down. So, you have to pick the ones that you want to subvert, I think. It has to be thoughtful to the story you're trying to tell.

Yeah, the meta stuff. So, speaking of the difference between this and other movies, I've noticed, in watching a lot of superhero movies, that they can try reasons to have the characters act outside a mask as much as possible. You do some of that in this movie. So the audience can see Ryan Reynold's face, even though he's wearing a ton of makeup.

A horrible three-hour prosthetic makeup job that he has to go through every day. Part of modulating that on this film was just the logistics of, like, "We have to shoot this in 75 days. We might want to do more with the makeup, but I don't know if . . . I can't get him to set until nine o'clock, ten o'clock because . . ."

You might adjust a scene, and be like, "He can be in a mask for this one," or whatever, but no.

I think it's important to see the characters as human beings. I think that's what people are loving about where these comic book movies are going. They're not just caricatures now. They are actually fully-developed humans with relatable issues, and problems, and especially Deadpool. I mean, we never go for global stakes, really. At least so far they haven't. And that wasn't the plan on this. We go for personal stakes.

And so I think it just makes him more relatable, as a character. So when we he puts on the mask even though he's an irreverent jerk, you still care about him. You know?

He's one of the few characters in the superhero universe that is actually a middle-aged person. What does that add to the character, do you think?

Again, it's this humanity that Ryan can bring to all his performances.

He brings an empathy and humanity to him, not only in the dramatic performances but in the comedic presentation of Deadpool the character. There's a self-deprecating vibe to Deadpool and he's willing to laugh at himself. Anyone who's reached middle-age, like myself, you need that. You need it.

Speaking of the action part of this, not to spoil too much, but you got so much more mileage in this film than the first one out of the fact that Deadpool can't die. You put his body through the ringer. Tell me about the process of coming up with all these crazy ways to put the fact that you can just mutilate him into action?

You look at your character's powers and then you look at problems to solve. You put them in the blender of choreography and you're like, "OK, Deadpool's powers are healing. All right. He needs to get from A to B. Here are the people that he's fighting." Then you let the choreography team go off, but you give him the parameters of like, "He can heal." That's the the power I want them to focus on. Because I did feel that [previously] at times it was under-used, and it was the most interesting power that he has.

So we really went all out, and I had them create libraries of ideas. We could start to use them, and when we got to the set piece, and choreography, within the idea that he can break his arm in a weird position, or break a leg, and still keep going, it just makes for an interesting choreography session, right, and design of action. Outside of the classic kick/punch, kick/punch. We've all seen that. So, when you have these unique powers, you want to take advantage of them.

I don't want to spoil too much, but I just was super impressed by the way that you were able to make the action sequences tell the story in a way that a lot of action films don't do. So, the first "Deadpool" movie is the highest-grossing R-rated film of all time. So you guys went in with an R-rating this time, which leads to, again, all that crazy, fun violence. Do you think that this is a new era for R-rated movies? Do you think that there's more room for them in the market?

I don't know. That's a good question. We'll see. I hope there is.

I mean, you want art to serve all different people and all different demographics. You don't want art to be restricted to a box and if there's a story that you want to tell on the PG space, great, but there are a lot of stories that need the R-rating so they can reach a more adult audience and a different sensibility.

I hope that they'll still want to make them. Who knows? I think "Logan" had success after "Deadpool," as a very different film. It did show that a comic book movie could be rated R and still do great business. So I think that's encouraging to, at least, the comic book world.

Julian Dennison, who plays the kid, Russell, in the movie —

Again, not spoiling anything, but he's just so great. He's from New Zealand. So, tell me about he ended up in your film.

I think he was already, kind of, in a sense they were writing to that idea.

Julian was in town. Ryan, him, and myself had a meeting and it was pretty instant, at that point. I mean, their chemistry was great. Julian is funny, and a really sophisticated actor for 15. And there wasn't really any other choice at that point. It's a role that's made for him.

I hope so. I mean, I don't know. I've heard there was a sound bite in the press that Ryan said there's not going to be a "Deadpool 3." I don't know if it was taken out of context or not. I hope there is. I hope that they continue to make Deadpool movies. Because it is one of these refreshing universes that you can do irreverent comedy [in]. You can do sophisticated stories. And you can be truly creative in the Deadpool universe, where others, sometimes, you're just wrangled into a corporate machine. I think this has its really special voice and a place in cinema. So I'm really grateful to have been involved in it.