Mainstream media is outraged that Russia would dare attack our democracy. In Venezuela, the rules are different 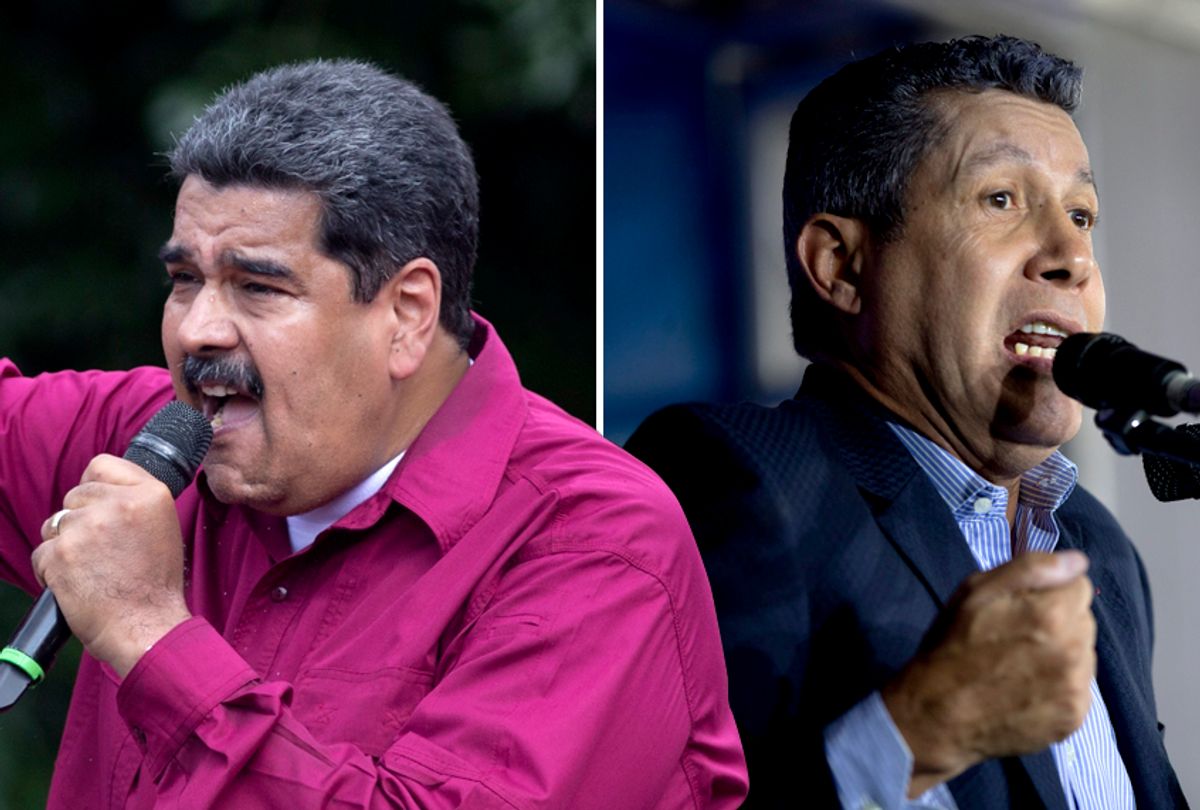 Editor's note: This article was originally published by FAIR.

When are elections free and fair, according to corporate media? When the U.S. government says they are.

The May 20 Venezuelan presidential elections pit Hugo Chávez’s successor, President Nicolás Maduro, against opposition challenger Henri Falcón. Maduro has called for the United Nations to observe and oversee the contest. Despite calling for elections throughout 2017, many local opposition groups, together with the U.S. government, have demanded no observers should come, arguing that it would “validate” the elections, and have preemptively decided they will not recognize the victor. 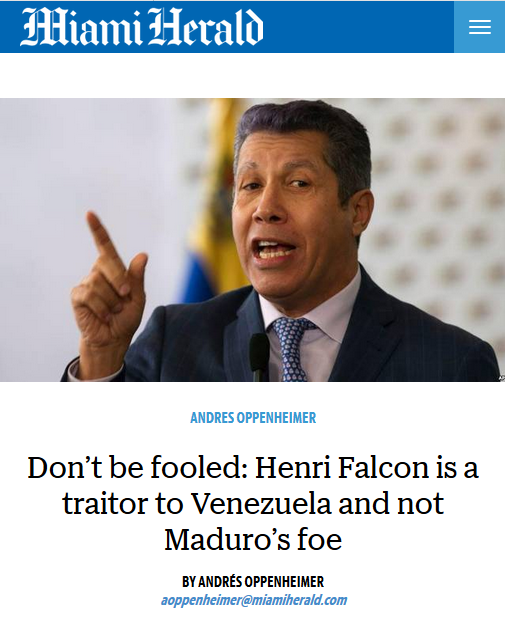 The U.S. State Department (2/8/18) has cast doubt on the validity of the elections, claiming they represent a “dismantling” of Venezuela’s democracy, as “they do not have the agreement of all political parties.” That the country is ruled by a dictator presiding over fake elections is taken as a given by corporate media; the Miami Herald( 5/2/18) declared the contest “fraudulent,” a “sham,” a “charade” and a “joke” in one column alone.

The major argument for this declaration is the barring of certain candidates from running, chiefly Leopoldo López, who is under house arrest after being convicted of leading a violent coup attempt against the government in 2014, and was also a key member of the 2002 coup against Chavez; even the State Department has called him “arrogant, vindictive and power-hungry.” Glossing over or simply not mentioning these key details in a 9,000-word puff piece, the New York Times Magazine (3/1/18) presented him as a Christ-like figure, “the most prominent political prisoner in Latin America, if not the world,” comparing him to Martin Luther King.

This is hardly the first time media have labeled elections in Venezuela a sham. As detailed in my new book, "Bad News From Venezuela: 20 Years of Fake News and Misreporting," U.S. media overwhelmingly presented, by a 12 to one ratio, the 2013 elections as unclean. The Miami Herald (4/13/13) claimed that there was “evidence that the country’s 2.4 million public-sector workers, and hundreds of thousands of government welfare recipients, were being pressured to vote along party lines,” and that “the media disparity is one of the most visible examples of the government’s campaign advantage,” with Maduro lording over a huge state media empire and the opposition “competing” on the “cowed” private media.

Unsurprisingly, polls show that Mr. Maduro will win this grossly one-sided contest. If by some chance he does not, the regime is unlikely to accept the results.

This contradicted years of positive appraisals from independent observers like the European Union. An AGB Nielsen report on the country showed that the state accounted for less than 10 percent of the TV market.

It was even contradicted by U.S. organizations Washington had paid to go there. The Washington-based Carter Center’s report on the 2013 election noted that Maduro’s opponent received nearly three times as much TV coverage, mostly positive, while Maduro’s coverage was mostly negative. It also reported that less than 1 percent of Venezuelans claimed to have been pressured to vote in any direction, and twice as many for the opposition as for Maduro. Indeed, its founder, Jimmy Carter (9/11/12), stated categorically: “The election process in Venezuela is the best in the world. ... They have a very wonderful voting system.” 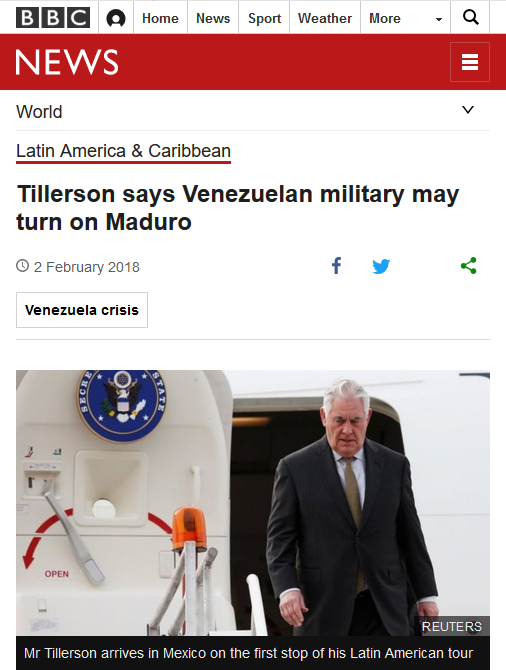 In recent months, the U.S. government has begun to discuss an invasion, with President Trump noting, “We have many options for Venezuela, including a possible military option.” It is also openly promoting a coup in the beleaguered nation, as then-Secretary of State Rex Tillerson (BBC, 2/2/18) stated:

In the history of Venezuela and South American countries, it is often times that the military is the agent of change when things are so bad and the leadership can no longer serve the people.

The world would support the armed forces in Venezuela if they decide to protect the people and restore democracy by removing a dictator.

Such direct interference is the sort that Russia can only dream of. Yet much of the media, indignant about Russian impact on the U.S. elections, are openly supporting a coup in Venezuela. The Washington Post (11/15/17) ran with the headline “The Odds of a Military Coup in Venezuela Are Going Up. But Sometimes Coups Can Lead to Democracy,” while the New York Review of Books (3/8/18) lamented, “The army does not at present seem to be showing signs of rebellion.” 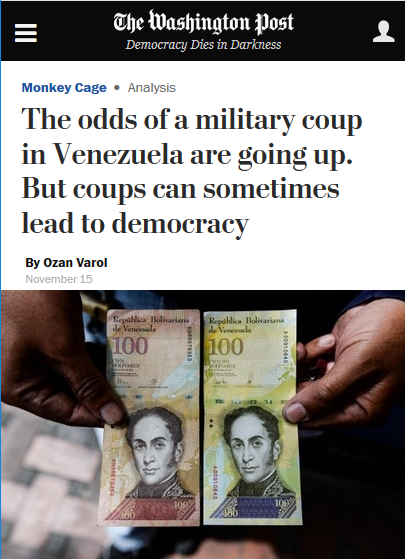 It appears the only pushback against a coup is on strategic grounds; Foreign Policy (5/4/18) noted, “The most viable path to change involves the military in some way,” but cautioned that a failed coup might backfire, encouraging Venezuela to seek more active ties to Russia and China, giving them a foothold in our “backyard.”

Opposition on moral or legal grounds appears low to nonexistent. Previous FAIR studies found that 95 percent of op-eds expressed clear and open hostility to the elected government. Indeed, this is hardly the first time the media have supported a coup in the country. As "Bad News From Venezuela" catalogs, in 2002 the U.S. trained and backed similar opposition groups, who, after deposing Chávez, then liquidated the Supreme Court, dismissed every elected official and began rounding up and arresting political and media figures who opposed them.

The coup was met with unabashed enthusiasm by much of the U.S. media, with many insisting that no coup had taken place, even weeks after the brief coup government had collapsed and Chávez was swept back to power by a popular revolution. And only 11 of 112 articles mentioned even the possibility of U.S. involvement, with the New York Times (4/13/02) claiming (emphasis added):

With yesterday’s resignation of President Hugo Chavez, Venezuelan democracy is no longer threatened by a would-be dictator. Mr. Chavez, a ruinous demagogue, stepped down after the military intervened and handed power to a respected business leader.

While the Washington Post (4/14/02) blamed Chavez for the whole affair:

Mr. Chavez was a terrible leader. His senseless mix of populist and socialist decrees seriously damaged the economy and galvanized opposition.

Writing in the New York Times (3/6/18), Henri Falcón has promised to open the country up to international agencies like the World Bank and IMF, and to dollarize the local currency, moves which are sure to be a bonanza for Western corporations. Nevertheless, some opinion polls show Maduro is the favorite to win, in part due to the highly unpopular opposition parties that even the Post (11/15/17) describes as “hopelessly ineffective.” Perhaps this explains why the U.S. government and the media have already decided the whole process is a sham.

Harvard professor Daniel Ziblatt on the leading indicators of a dying democracy.