Is it a great adaptation of Ray Bradbury's masterpiece? No. But Michael B. Jordan gives a stunning performance 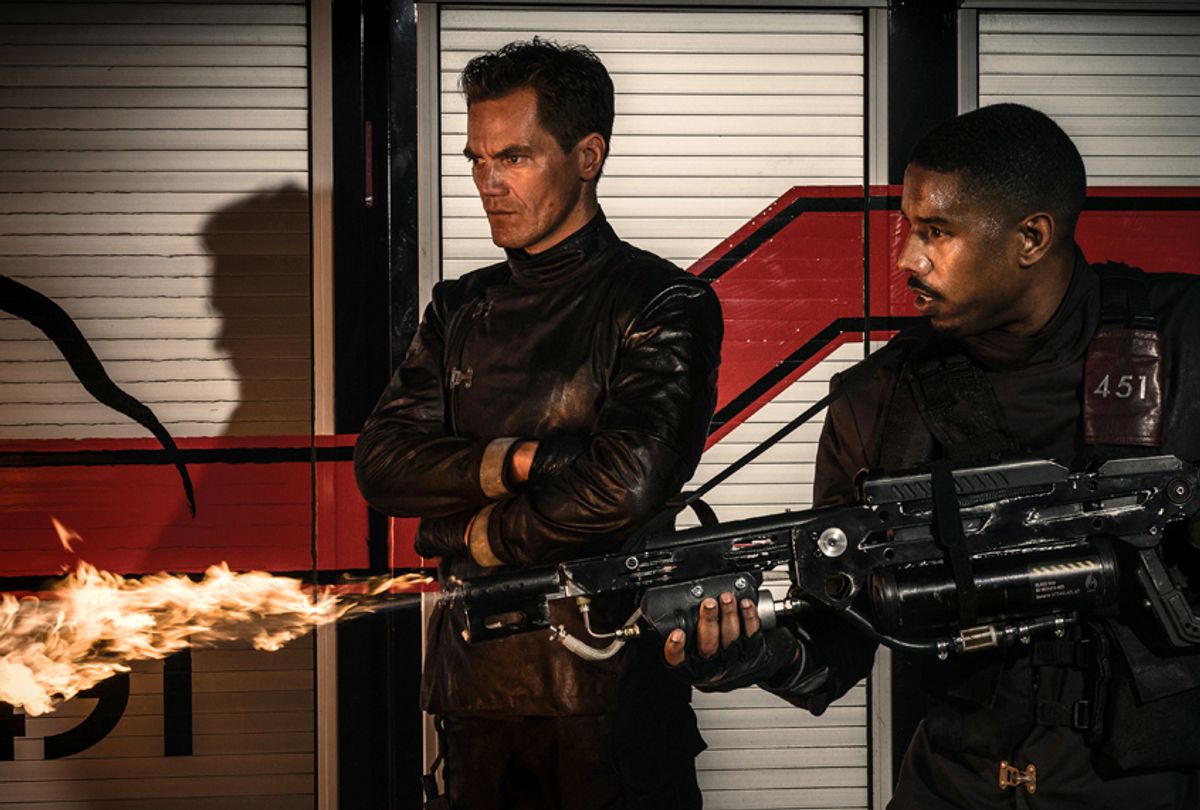 Michael Shannon and Michael B. Jordan in "Fahrenheit 451" (Michael Gibson/HBO)
--

Director Ramin Bahrani doesn’t have to do much to make Ray Bradbury's cautionary 1953 novel “Fahrenheit 451” scream its familiar warning to 2018 audiences.

Indeed, what was nightmarish speculation for Bradbury 65 years ago is basically our reality now, specifically his idea of television screens the size of walls and a population that medicates its problems.

Many of us will watch Bahrani's cinematic adaptation “Fahrenheit 451,” making its TV debut Saturday at 8 p.m on HBO, on the small screens integrated into our mobile devices. They'll access his film via internet and data connections that make it possible to see it any time, and anywhere.

Technology has more or less made Bradbury’s nightmare all but a fait accompli. We should thank our stars that we're not heating our homes with the innards of public libraries at this point.

Among Bradbury’s best known stories, “Fahrenheit 451” seems well-suited for a high-end cinematic treatment by master of blockbusters, someone of Steven Spielberg’s or Ridley Scott’s caliber.

It also could be exciting in the hands of a director skilled in delivering unapologetic bombast. Imagine it rendered with the level of bluster dreamt up by the likes of ‘90s-era Paul Verhoeven. Do you recoil at that idea? Go ahead. But then consider how well “Starship Troopers” holds up even now. Scratch that — especially right now.

There’s absolutely nothing wrong with middling, B-grade sci-fi. I’m a big fan of it, actually. Even the weirdest, most baffling shreds of “what if” concepts can be reasoned into some version of legitimacy, if you choose to engage in such mental gymnastics. We have to believe they’re telling us something worthwhile.

This designation — middling — does not apply to Bradbury’s story, mind you. His masterful distillation of post-World War II, McCarthy-era paranoia mixed with a fear of intrusive technology spoke to its time with such clarity and force that it became a work for the ages.

Bahrani’s “Fahrenheit 451,” which he co-wrote with Amir Naderi, veers somewhere between the cinematic approaches cited above, fluttering more closely toward solemn treatment than pure adrenalized action. But when it veers toward the latter without fully embracing it, its coals cool considerably.

Comparisons to “Blade Runner” are inevitable in the opening scenes of Bahrani's "Fahrenheit 451," that film being a standard-setter for every dark futuristic vision to follow. At the same time, and much to this adaptation's detriment, its third act bears more of a resemblance to the simplistic inevitability of “The Maze Runner.”

I do not cite that particular franchise to be cute but as a concrete example of a solid but unremarkable work of genre, with characters charged to fulfill a mission that, even when it’s explained, really doesn’t make sense. What will a man or woman do to defend their ideals or keep the dying candle of humankind lit? The answer.  . . will not surprise you. Spoiler alert: It involves lots of jogging.

Still, Bradbury’s warning has far more of a lasting weight and meaning to it than most modern dystopian bestsellers. And in its best moments Bahrani’s film capitalizes upon the tension between the discomfort of freedom and the false worship of happiness. Even when this new “Fahrenheit 451” transforms into more of a mid-grade action movie than a think-piece, the outlines of Bradbury’s vision are never completely lost.

It is possible to fulfill both of these purposes, to create something that thrills and asks us to ponder deeper questions. It's best of all to find a balance between those aims. François Truffaut’s antiseptic 1966 vision of “Fahrenheit 451” didn’t work precisely because it ensnared itself in the story’s headiness and the aesthetics of the atomic age. Ramin avoids that pit, aided in no small part by a cast led by Michael B. Jordan as Guy Montag.

Jordan’s stunning, visceral performance anchors the narrative in uncertainty from the start, when his Montag is an action hero basking in the love of the masses. Jordan is in his stride at the moment, though he’s spent years constructing a career out of roles that enable him to cast between those very human internal divisions we all experience under stress. His Montag is leagues apart from Killmonger, the antagonist of “Black Panther” — except in the scenes where his fireman wears the crackle of an aggressor’s might like a cape.

He pumps up his fellow firemen with the promise of finding purpose through burning, the lesson taught by his mentor Beatty, played by Michael Shannon.

Depending on how much of Shannon’s filmography you’ve taken in, this latest version of a man ruled by brooding menace is either more of the same stuff the actor is known for or spot-on for the character. Bahrani’s version of Beatty is more central to the story than he was in Truffaut's take, one of several updates to Bradbury’s story. In Bradbury’s tale and Truffaut’s film, Montag has a wife; here Beatty is Montag’s family, the adoptive father who raised him in the philosophy of this new world.

And for all of its flaws, this is one of those threads worth pulling on. The script paints Montag as Beatty’s star pupil, a reflection of his greatness. He’s also the only black fireman in his group. Most of the other people of color seen here are branded “eels,” the film’s future-speak term for illegals, personified in a beaten-down informant named Clarisse (Sofia Boutella).

Boutella is just fine, by the way, although her role lacks the level of grit and conflict afforded to Montag and Beatty. She's also saddled with one of the least-believable parts of the flick, a late-game spark of romance between Clarisse and Montag that appears out of thin air.

More fascinating is the movie's visual language. Derivative though it may be, it's also informed by Bradbury’s vision of a populace hooked on the illusion of choice and intoxication of validation, made specific to our age. Montag’s home is a work of clean lines, glass and metal; the seedier spots where, say, the odd rebel writer is hiding, are shabby and dim. Everything lives in shadow except for the screens spanning entire buildings, bright with images of headlines and showers of emojis.

This, a character explains, is the end result of an age that begins with shortened attention spans and opinions formed by headlines. You know, peak 2018.  Gigantic images of magnificent predators loom over admonishments to “Stay Vivid,” and newscasters report only on developments as they pertain to the world’s happiness index.

And this is how the firemen rule, capitalizing upon our obsession with celebrity and a population connected by total access to its version of the internet, known here as “the Nine.”

Social media and the illusion of choice has made them into some grander version of reality stars skilled in working the masses into a frenzy, transforming culture into a monolith united by ignorance. For ignorance is bliss; bliss is a more eloquent way of expressing happiness, and the new Bill of Rights say that it’s better to be happy than to be free.

Bradbury was far from the only person fearful of the small screen’s invasion of our private spaces, but his fear that the masses would fall under its hypnotic spell, losing our ability to think critically and connect, was quite specific. To him screens could be mouths and eyes, swallowing our attention and consciousness, watching to make sure we stay in line.

And in Bahrani’s “Fahrenheit 451,” they feed us without nourishing our intellect in the way that literature can. Beatty drums into Montag the dangers within the covers of books, the confusion created by their lack of singular thought. Fact is fake, history has been altered long ago, to the extent that the populace believes Benjamin Franklin created the concept of firemen to burn documents more efficiently as opposed to put out conflagrations.

Neither Montag nor Beatty harp on discussions of race or class, save for in a scene where Montag mentions the various groups of people offended by various books as an explanation of why they had to be banned and burned, mentioning Mark Twain’s “Adventures of Huckleberry Finn” as offensive to black people and Richard Wright’s “Native Son” as offending whites.

Of course, when Montag asks how “Native Son” offends, Beatty has no answer.

“Fahrenheit 451” has felt troubling for decades; in 2018 the most preposterous elements of its reality seem more possible than ever. Bahrani and Naderi began writing the script after the 2016 election, which explains its emphasis on spying technology, sanitized information, propaganda as news and the mass dumbing down of communication and thought via social media.

Elements of the plot’s tailoring to suit today’s world feel too contrived even so, and this gets in the way of fully embracing “Fahrenheit 451.” There’s the question of whether a work can be too conscious in its desire to evoke an era. Like Montag, the audience may begin to question what exactly this film seeks to say and do.

Another thing: As in "The Handmaid's Tale," we find out that none of this madness has swallowed Canada. What makes Canada immune to the worst of our future? Follow-up question: Is the Canada tourism department secretly funding these shows?

Be that as it may, other intentional changes in Bradbury’s vision are subtle enough to appreciate Bahrani's engagement with the viewer's intellect. Instead of banning all literature, three works  — the Bible, Herman Melville’s “Moby Dick” and Virginia Woolf’s “To the Lighthouse” — are approved, albeit distilled into emojis. One of those tracks; as for the other two it’s never said why that is, as if Bahrani is asking us to find out the reason by reading them.

The same goes for Fyodor Dostoevsky’s existential novel “Notes From Underground,” the book Montag chooses to read in his quest to find answers left unspoken by a world aflame with dullness. In these details Bahrani nods at viewers familiar with those books and the meaning they provide; to others they sit, stubbornly unexplained, as silent invitation to find out why he made those choices by reading the source material. But maybe not; they can get the gist of their content within a plot summary on Wikipedia.

It’s hard to say whether this “Fahrenheit 451” will survive the ages with the same luster as its source material, even if it appears to shine brightly. As an action piece, it's merely OK; as a futuristic commentary, the best I can say is that the film does the job. Where it truly falls short is in capturing the ways that literature helps us define our humanity and our individuality and life's meaning. . . although, in the story's signature moment where a protestor immolates herself with her books, we do get some sense of what we stand to lose if the written word isn't merely devalued but erased entirely.

If this "Fahrenheit 451" succeeds in wowing you in the moment and makes you think about it later, even if only for the few seconds it takes to decide it’s been far too long since you’ve read something longer than a listicle, then perhaps that is enough to declare that Bahrani has served Bradbury’s mission. On the whole, though, this is one of those classic cases where the book really is so much better than the movie.