The horrifying social effects of discrimination against the obese

Studies have shown that people who are obese suffer, from the job market to the dating pool 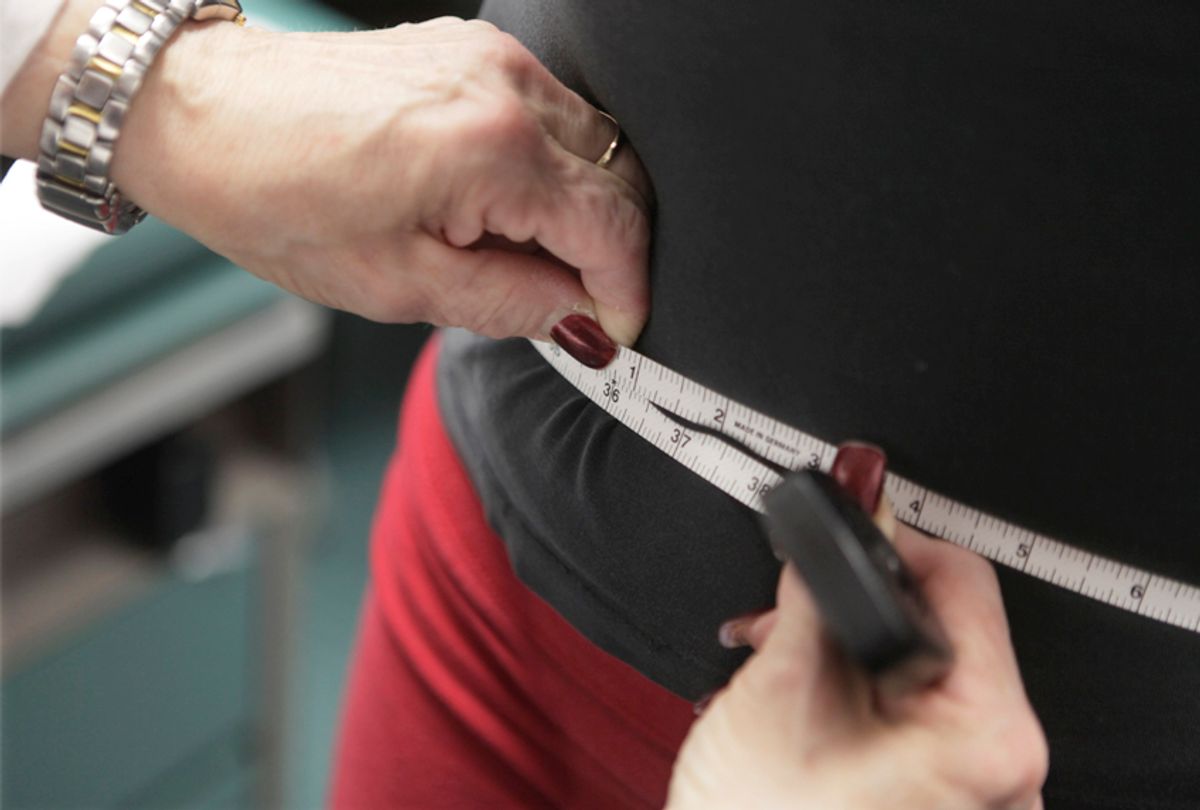 We are so accustomed to dehumanizing the obese that, perhaps more often than not, we don't even notice when it's happening.

Such was the point touched upon by Jia Tolentino in her New Yorker piece about "incels," shorthand for "involuntary celibates," the occasionally violent online movement of men who are angry that they can't have sex with young and beautiful women whenever they want.

[I]ncels, in any case, are not actually interested in sexual redistribution; they don’t want sex to be distributed to anyone other than themselves. They don’t care about the sexual marginalization of trans people, or women who fall outside the boundaries of conventional attractiveness. (“Nothing with a pussy can be incel, ever. Someone will be desperate enough to f**k it . . . Men are lining up to fuck pigs, hippos, and ogres.”) What incels want is extremely limited and specific: they want unattractive, uncouth, and unpleasant misogynists to be able to have sex on demand with young, beautiful women. They believe that this is a natural right.

"The standard of attractiveness portrayed on television and in magazines is slimmer for women than for men, slimmer than in the past, thinner than the actual female population, and often thinner than the criteria for anorexia," Daniel Cable, London Business School professor and author of "Alive at Work," told Salon by email. "In line with these pervasive social norms surrounding weight, many women have internalized these values: About 90% of cases of anorexia and bulimia are women."

As Cable also noted, our cultural hostility toward the obese isn't limited to matters of physical attractiveness.

"Employers also seem to have internalized the notion that employees’ weight matters. Obese individuals are rated as being less desirable as subordinates, coworkers, and bosses," Cable told Salon. "Even though these stereotypes are inaccurate, obese employees are viewed as less conscientiousness, less agreeable, less emotionally stable, and less extroverted than their 'normal-weight' counterparts. Research also reveals that overweight women are consistently judged more harshly in the workplace than overweight men. 60% of overweight women and 40% of overweight men describe themselves as having been discriminated against in the course of employment."

When I reached out on social media to various people for their body-shaming stories, I heard plenty of anecdotes that confirmed Cable's analysis.

I know that my [weight] definitely affected my dating pool," one woman explained to me (full disclosure: she and I briefly dated in 2012). "There were definitely guys who would meet me in person and just be very upfront. Like my size was a big turn-off, and I wasn’t their type. These were people that it was totally clicking conversational or intellectual-wise. So it's ridiculous, and you have to be attracted to someone, but it's so sad that it means that much."

Another woman told me about the trauma she endured at the hands of her parents, who told her that her size would be a detriment to both her personal life and her professional ambitions.

"When I was a kid, my parents were always pretty harsh about my weight," she told me by email. "My mom is Filipino (and adopted) and I just don't have the same build as anyone else in my family. Starting when I was about 8 or so, I was required to run a mile every day. By the time I was a teenager, my parents started putting me on different diets. I remember one particular incident where my dad told me that no one likes fat people and no man would ever love me because I was fat. They may like the size of my breasts, but they would never love me. He even went on to say that if he were hiring for a job and had to pick between two people, he would always pick the thin person."

This isn't to say that women and the obese are the only ones who face discrimination and bullying because of their bodies. A high school friend of mine recalled how, because he was smaller than most of his male peers, he was "a pretty constant focus for bullies who decided I was an easy target due to my size."

As he recalled, "one of the defining moments of my high school career was a fight I got into with one of my tormentors. The soccer team thought it would be funny to put us in the wrestling room together to 'have it out.' It was the collective opinion of the group that I was about to get my ass kicked. He was about 6 inches taller and 40 pounds heavier than I was. Luckily for me, I won. I won big. And I did it in public, in front of several other bullies. I don’t know many other guys who found themselves in situations like that. The bigger guys I knew never had to fight just to be left alone."

And, predictably, men also experience discrimination for being obese as well, albeit not always in the same ways as women.

"Research evidence by others suggests a 'wage penalty' for being obese for women, but not men; obesity results in a lower wage, other things equal for women," J. Paul Leigh, a professor of economics at the University of California, Davis, told Salon by email. "Research by me suggests that, for men, decreasing wages results in obesity. For women, researchers will point to discrimination based on looks. For men, could be a variety of things, but many men internalize their social position based on their wage. If the wage is low or falling, they feel they are letting themselves and their families down; they do not feel good about themselves. One way to improve mood, at least temporarily, is to eat, especially fatty, sugary foods that taste good."

While I didn't need the increased attention on incels to remind me of the struggles facing the obese (it's a subject that I've written about before and, as an obese man, directly applies to my own life), it is in many ways instructive to look at their toxic worldview when understanding exactly how the obese are marginalized. It is safe to assume that many of these men could successfully pursue relationships with women who were obese if they wanted to, and that they convince themselves that they can't because they're simply not attracted to them (an argument that ignores the influence of popular culture in determining what we find attractive).

They don't want to, however, because to them people who are obese are simply not as valuable as those are not. Assuming they see them at all.