One issue can bring together all 4 of Mexico's presidential candidates: They're fed up with Donald Trump 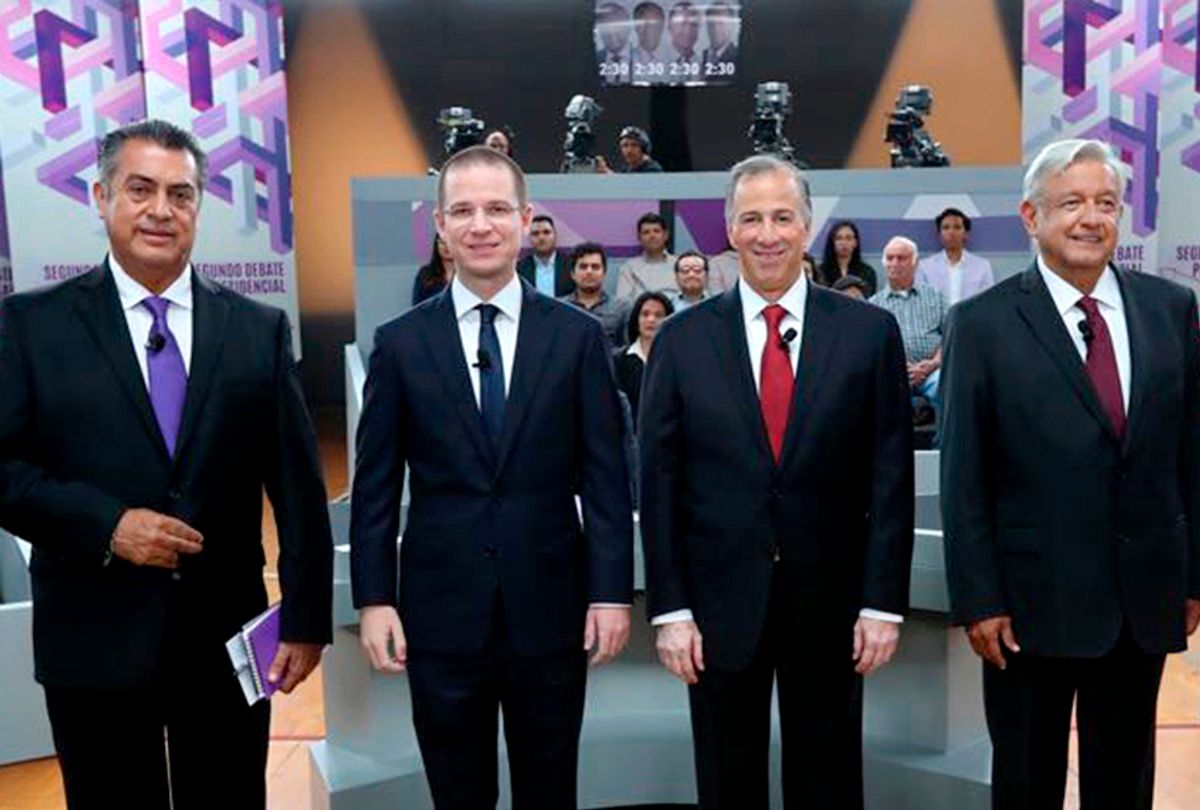 As Mexico's most recent presidential debate clearly demonstrated, the future leader of America's southern neighbor is likely to view the United States through the hostile lens that President Donald Trump has used to view their own country.

"Trump is going to have to learn to respect us. That I can guarantee you," proclaimed Andrés Manuel López Obrador, the left wing candidate who is considered the frontrunner in the race. His sentiments appeared to be shared by the other three candidates on the stage, all of whom used tough talk toward America's president as a way of distancing themselves from an administration they claim has humiliated their nation.

"I want a relationship of friendship, but not of subordination," López Obrador later added.

"The problem began on this day," said conservative candidate Ricardo Anaya Cortés, holding up a photo of then-candidate Trump shaking hands with Mexican President Enrique Peña Nieto in 2016. "Not only an error, it was a humiliation for the Mexican people," Anaya continued. That meeting became controversial in Mexico, where it was perceived as legitimizing an American presidential candidate who had kicked off his campaign with a speech that had insulted and demeaned Mexican undocumented immigrants.

Former foreign minister José Antonio Meade, candidate for the ruling Institutional Revolutionary Party (or PRI, its Spanish acronym), defended Peña Nieto's invitation to Trump (which had also been extended to Democratic candidate Hillary Clinton), although he did so in a way that still contained an insult for the American president — Meade argued that the president had not believed Trump would actually win the election. By contrast, an independent candidate, Jaime "El Bronco" Rodríguez, said that Mexico needed to become less economically dependent on the United States as a way to "put them in their place."

Rodríguez's comment was particularly ominous since it foreshadows one way in which U.S.-Mexico relations could be permanently tainted by Trump's presidency.

"We are by far Mexico's major trading partner, but Mexicans are starting increasingly to move toward what they call a 'Plan B,'" Ed Gerwin, senior fellow for trade and global opportunity with the Progressive Policy Institute, told Salon. That might mean, he continued, that "instead of importing American corn or American soybeans, they're going to start looking for products like those and a wide range of other products from other countries, South American countries in particular." That could "make Mexico a less lucrative market for American suppliers," Gerwin said, and lead to Mexico developing "stronger relationships with those other countries as well."

Gerwin also explained how the Mexican public has become increasingly unhappy with both the United States in general and Trump in particular, creating a situation where all four of the current presidential candidates, regardless of their ideological differences, made a point of denouncing the current U.S. administration.

He added, "We had a good and effective partnership with Mexico prior to the election. NAFTA certainly was viewed as having some flaws and in need of modernization, but there was no attempt, despite the occasional rhetoric to kind of totally upend and disrupt the NAFTA relationship."

Despite Gerwin's analysis that the U.S. "had a good and effective partnership with Mexico" prior to the 2016 election, it's fair to say the two nations have long had issues. Almost as soon as Mexico attained its independence from the Spanish Empire in 1821, the two countries had seemingly endless military conflicts over various territorial disputes. Ongoing controversy over the short-lived independence of Texas and then its accession to statehood in 1845 led to the Mexican-American War, which ultimately ended with the United States conquering present-day Arizona, California and New Mexico, as well as parts of Arizona and Colorado.

Although the bitter territorial disputes between the United States and Mexico ended with the signing of the Gadsden Purchase in 1853, the two nations had a number of major geopolitical conflicts after that. The Tampico Affair in 1914 — one in which nine American soldiers were arrested and detained for allegedly entering a prohibited area of the country — prompted President Woodrow Wilson to invade the port of Veracruz, increasing tensions between the two countries. Two years later, the revolutionary Francisco "Pancho" Villa attacked the American town of Columbus, New Mexico, killing 17 Americans in the first invasion of United States territory since the War of 1812. Matters seemed to come to a head in 1917, when America was drawn into World War I after a telegram was intercepted in which Germany's foreign minister offered to restore to Mexico the lands it had lost in the Mexican-American War in return for attacking the United States.

Ever since President Franklin D. Roosevelt implemented the so-called "Good Neighbor" policy with Mexico in 1933, however, a new precedent was made for improved U.S.-Mexican relations. Immigration and smuggling have remained unsolved problems between the two countries ever since, but in general, their respective governments at least have made an effort to seem like they were on good terms with each other.

That era is not quite at an end, Gerwin believes. "I think the ties still exist," he told Salon. "Basically NAFTA has helped to knit together the American and Mexican economies. In the agricultural sector, we import in the United States more products from Mexico than we ever did. We really work together to build things like cars and aircraft in ways we never did prior to NAFTA. Those are important relationships that actually benefit both countries, because we make things that we sell to the rest of the world.

"We have a very deep economic relationship that has grown over the two decades of NAFTA," Gerwin added. "There's a lot of concern that if we're not careful in what we do in amending the agreement -- and certainly if we're not careful to keep the agreement from being terminated -- that's going to have untold economic effects both here in the United States and in Mexico, for big companies and small ones."

Check out the major news stories of the day.