Racism and the royal wedding: How Harry and Meghan could move global race relations forward 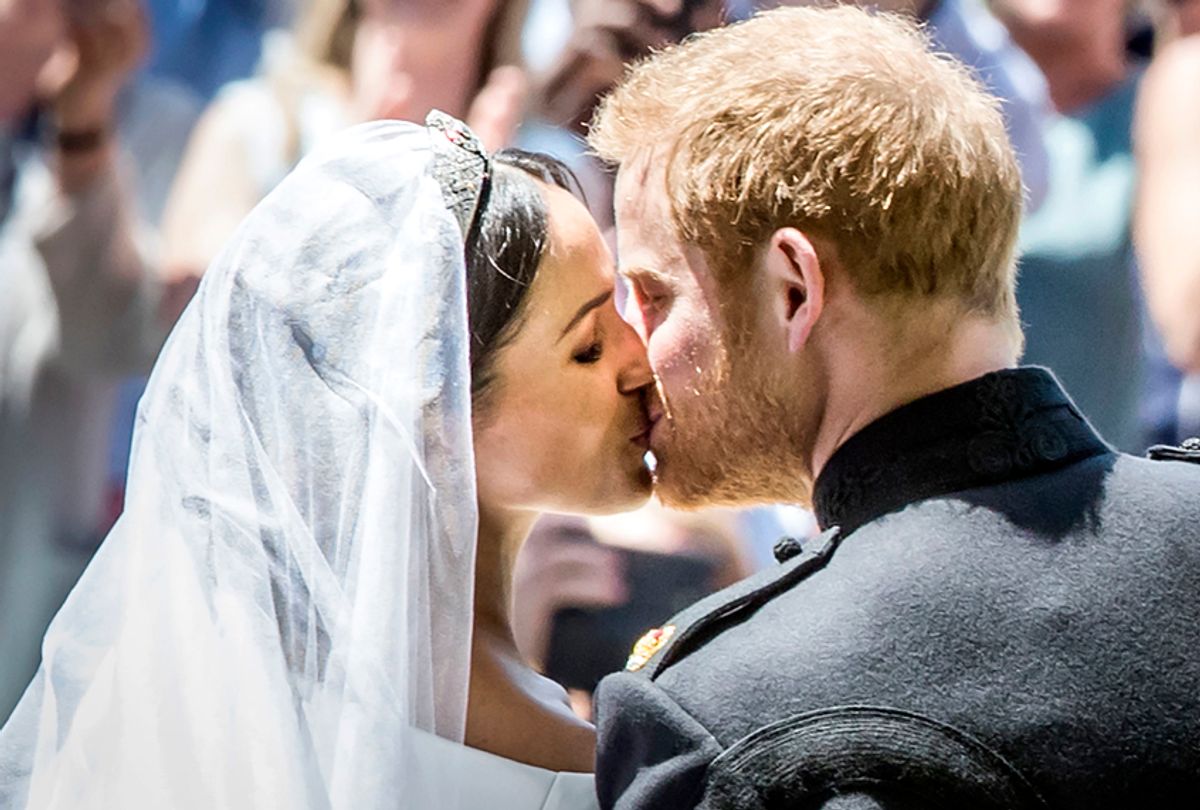 Meghan Markle and Prince Harry kiss on the steps of St George's Chapel at Windsor Castle following their wedding, Saturday, May 19, 2018. (AP/Danny Lawson)
--

I tried not to be “that guy” as the whole world buzzed over the royal wedding last weekend: anti-everything, you know the one angry person who's saying, “Our whole world is crumbling! The president sold America to Russia! Poor people are dying! No one has time to care about a royal wedding!” to any and everybody who was mesmerized by Prince Harry's marriage to Meghan Markle, now Duchess of Sussex. Instead, I ducked all of the wedding talk so that admirers could have their moment and enjoy the royal show.

To be honest, I normally don’t watch weddings or wedding TV unless I’m trying to impress a woman, and if I did I’d still never watch a ceremony starring Prince Harry, mainly because it’s hard for me to get over the images of the younger version of him proudly sporting a swastika armband, partying with some other clowns wearing black face and Klan hoods, out of my head. I understand that he was young then, and people do change. I need forgiveness too at times. However, it’s still difficult for me to forgive a person with the privilege to know better, or to forget. I’m working on it. And marrying Meghan Markle, a biracial woman, can be a huge step in the right direction. Markle has already made many people totally forget about Harry's Nazi dress-up days, apparently, as a collection of black megastars, from Oprah and Idris Elba to Serena Williams, were in attendance at Windsor Castle for Saturday's ceremony.

Many of my friends and loved ones gushed over each and every detail, from Markle’s beauty and her dress to the wedding cake flavor and even the pirate-like ruffles that dangled from Prince Harry’s jacket. I did read the press coverage, and while most of the stories were glowing, some of the tabloids in the UK had some interesting things to say about Prince Harry’s bride.

One Daily Mail headline reads, “Now that's upwardly mobile! How in 150 years, Meghan Markle's family went from cotton slaves to royalty via freedom in the U.S. Civil War... while her dad's ancestors included a maid at Windsor Castle." And another that was more disturbing: “EXCLUSIVE: Harry's girl is (almost) straight outta Compton: Gang-scarred home of her mother revealed - so will he be dropping by for tea?”

But social worker Ragland might now find herself welcoming a royal guest to downtrodden Crenshaw after Prince Harry was revealed to be dating her daughter — Suits actress Meghan Markle.

Calling Crenshaw downtrodden is disrespectful, acting like millionaires don’t live in certain parts of the area like Baldwin Hills is ignorant, and the story of Harry and Meghan is already a great one, so why sensationalize it through a racist lens? As if Prince Harry swooped in on his Klan white stallion and delivered Markle from the slums of a Blood- and Crip-infested neighborhood? As if Markle wasn’t a already wealthy actress when they met? As if Markle’s mom isn't a professional herself — a social worker and a yoga teacher? Give it a rest.

Of course, Harry isn’t to blame for how the tabloids write about his wife. But I can’t help but go back to that photo of Harry at the costume party and connect it to the disturbing way of thinking that allows tabloids to sell a worldview that continues to put people of color like Markle in a box, ignoring her accomplishments while completely dismissing Harry's racist actions as if they had never happened. These tandem phenomena are representative of larger cultural problems, and the royal family now has a unique opportunity to play a bigger role in improving race relations on a global scale.

Markle is basically the Obama of the royal family now; we've seen her both praised and torn apart all over the internet in ways that are reminiscent of how our 44th president has been treated. Obama took that opportunity, harnessed the viral media coverage and used it to deliver a cocktail of history and American truth in his 2008 "A More Perfect Union" campaign speech­­ — the speech that made the possibility of a black president a reality. In this speech, he spoke to black Americans who were either ignoring or not aware of the plight of poor whites and struggling immigrants:

For the African-American community, that path means embracing the burdens of our past without becoming victims of our past. It means continuing to insist on a full measure of justice in every aspect of American life. But it also means binding our particular grievances — for better health care and better schools and better jobs — to the larger aspirations of all Americans: the white woman struggling to break the glass ceiling, the white man who has been laid off, the immigrant trying to feed his family.

And it means taking full responsibility for our own lives — by demanding more from our fathers, and spending more time with our children, and reading to them, and teaching them that while they may face challenges and discrimination in their own lives, they must never succumb to despair or cynicism; they must always believe that they can write their own destiny.

And then he flipped the responsibility over to white people, many of whom who don't understand African-American struggles:

In the white community, the path to a more perfect union means acknowledging that what ails the African-American community does not just exist in the minds of black people; that the legacy of discrimination — and current incidents of discrimination, while less overt than in the past — are real and must be addressed, not just with words, but with deeds, by investing in our schools and our communities; by enforcing our civil rights laws and ensuring fairness in our criminal justice system; by providing this generation with ladders of opportunity that were unavailable for previous generations.

It requires all Americans to realize that your dreams do not have to come at the expense of my dreams; that investing in the health, welfare and education of black and brown and white children will ultimately help all of America prosper.

In the end, both groups had the chance to be represented and hopefully gained a better understanding of each other. Harry and Meghan have a similar platform now — maybe even a bigger one — and they can use it to encourage forward momentum in race relations around the globe.

Those who still believe “racism is over" need to understand how far we still have to go. If Harry and Meghan use their influence to expose the unnecessary slander and irresponsible headlines — and connect them to a wider pattern of racial bias — they can move the conversation on race relations forward, not just in the UK and the U.S. but around the world. Harry, who apologized for his Nazi costume back in 2005, could dive deep into his mindsets then and now, and talk candidly about how to take responsibility and make amends for past racist acts. That's what would finally let me move past Harry's poor choice of costumes — and maybe even learn to romanticize the monarchy like everyone else.

A look at the new, modern monarchy.