How anti-choice activists in the U.S. trying to stop Ireland from voting Yes to abortion 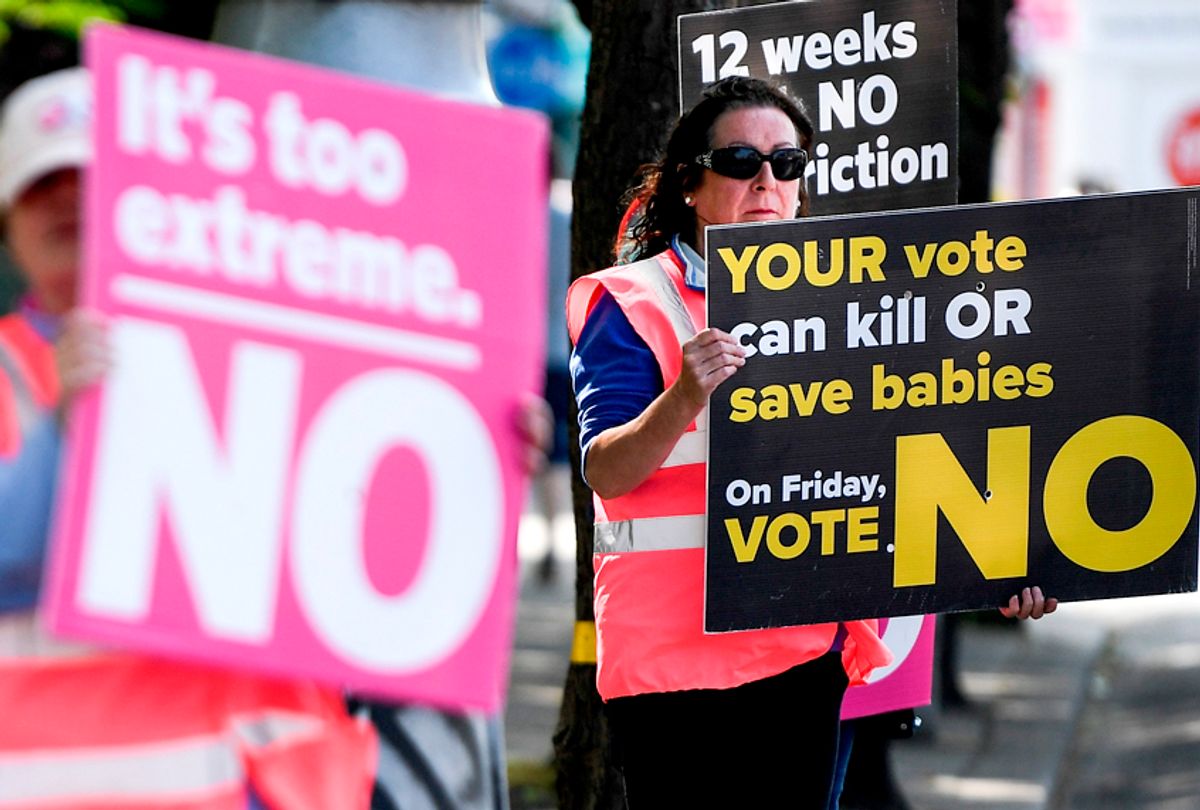 Anti-abortion groups in the United States are trying to prevent Irish voters from repealing their country's abortion ban.

The vote on whether to repeal the Eighth Amendment — a 35-year-old constitutional ban on abortion in nearly all circumstances — will reveal how attitudes have shifted in a country that was once a projection of Roman Catholic conservatism.

The Roman Catholic Church was the main force behind the passage of the 1983 referendum. In the decades since, however, the church's power has been substantially weakened by a number of scandals, most notably clerical child abuse.

Speaking at a news conference, Prime Minister Leo Varadkar noted that the minister of health is working on a proposal to allow unrestricted access to abortion up to the 12th week of pregnancy, and later in cases of rape, incest or fetal abnormality, the New York Times reported.

Varadkar also said that more than 2,000 Irish women and girls were taking abortion pills each year without proper medical direction, and that this would certainly lead to medical tragedies.

"I don’t think we can persist with a situation where women in crisis are risking their lives for the use of unregulated medicines," he said, "and I don’t believe the Constitution is the place for making absolute statements about medical, moral and legal issues."

The proposal will be presented to Parliament if the country votes to repeal the constitutional ban. But there is concern about potential foreign meddling in the vote.

Craig Dwyer, co-founder Transparent Referendum Initiative, an election transparency group which is advocating for new campaign disclosure laws for digital advertising, compiled a database of hundreds of online ads that have surfaced about Ireland’s abortion referendum. Many of the ads were shared on Facebook from undisclosed locations and buyers who couldn't be traced.

"With social media in this campaign, our democracy is up for sale to the highest bidder and we're blindfolded at the auction," Dwyer told the New York Times.

With undisclosed campaign-related content on the rise, Facebook and Google took offensive stances this month to limit outside interference ahead of Ireland's vote. In May, Google announced a ban on all referendum-related ads and Facebook blocked spots related to the abortion campaign from groups outside Ireland. Most recently, Facebook introduced a new labeling system, which will show users who paid for a political ad and demographic information for audiences who were targeted by it.

Dwyer also said that while Facebook's blockage of abortion ads purchased by international groups had limited the number of such ads on the social network, abortion-related content from foreign organizations continued to appear on other digital platforms and was still being posted on Facebook by users.

Felicia Cravens, a Texan who runs a Facebook page called Unfakery that helps track down fraudulent accounts, told Salon she's concerned about the list of items Facebook is considering "political" and "how they could possibly intend to fairly and equitably review the massive amounts of political advertising that will be purchased for candidates and issues at all levels."

Additionally, political advertising is prohibited on Irish television and radio, but the digital world presents a different case.

"There is no law against someone anywhere else in the world signing a commercial contract with a British company to use foreign money or unknown money, that is not going through any official regulated campaign, in order to influence an Irish vote," Liz Carolan of the Transparent Referendum Initiative told the Times. "There's a serious vulnerability in our democratic system. And it’s now being exploited by incredibly sophisticated campaign techniques, and Facebook doesn’t have to tell us who’s doing it."

In the wake of revelations about the misuse of Facebook data collection tools to sway Britain's vote on European Union membership in 2016, and the presidential election in the United States, there is growing concern that similar gambits might be used in Ireland's abortion campaign.

"The broader question is what information is flowing through the system and how much of that information is pollution and what is not," Gavin Sheridan, a co-founder of the media agency Storyful, who tracked foreign ad spending for the Irish vote, told the New York Times. "We can’t really know."

"We didn't elect Mark Zuckerberg to make decisions about how our referendum should be run," Sheridan added, referring to Facebook’s chief executive.

John McGuirk, a representative for the Save the 8th campaign, which defends the abortion ban, said the organization was preparing to spend 40,000 euros on YouTube ads, or the equivalent of about $47,000, but since Google had blocked all referendum-related ads, they were no longer able to do that, the New York Times reported.

"It's frightening the extent to which they can make a decision on the basis of something and be answerable to nobody," McGuirk said.

Ireland's divisive campaign experience is encouraging some Irish politicians to advocate for laws that would require companies to reveal who is paying for ads, even on social media. A bill they wrote is drawing attention and, if passed, would be the world's first campaign-finance law to account for digital advertising. In the United States, a similar measure, the Honest Ads Act, has lost steam.

"We need to know who is running the ads and who's paying for the ads," James Lawless, the legislator who sponsored the bill, told the New York Times.

Governments globally must set tougher laws surrounding disclosures of digital campaign ads so voters know who is paying for the material that's appearing in places online including Facebook, Google and YouTube.