Liz Garbus' documentary series about The New York Times in the Trump era may drag, but it does not fail journalism 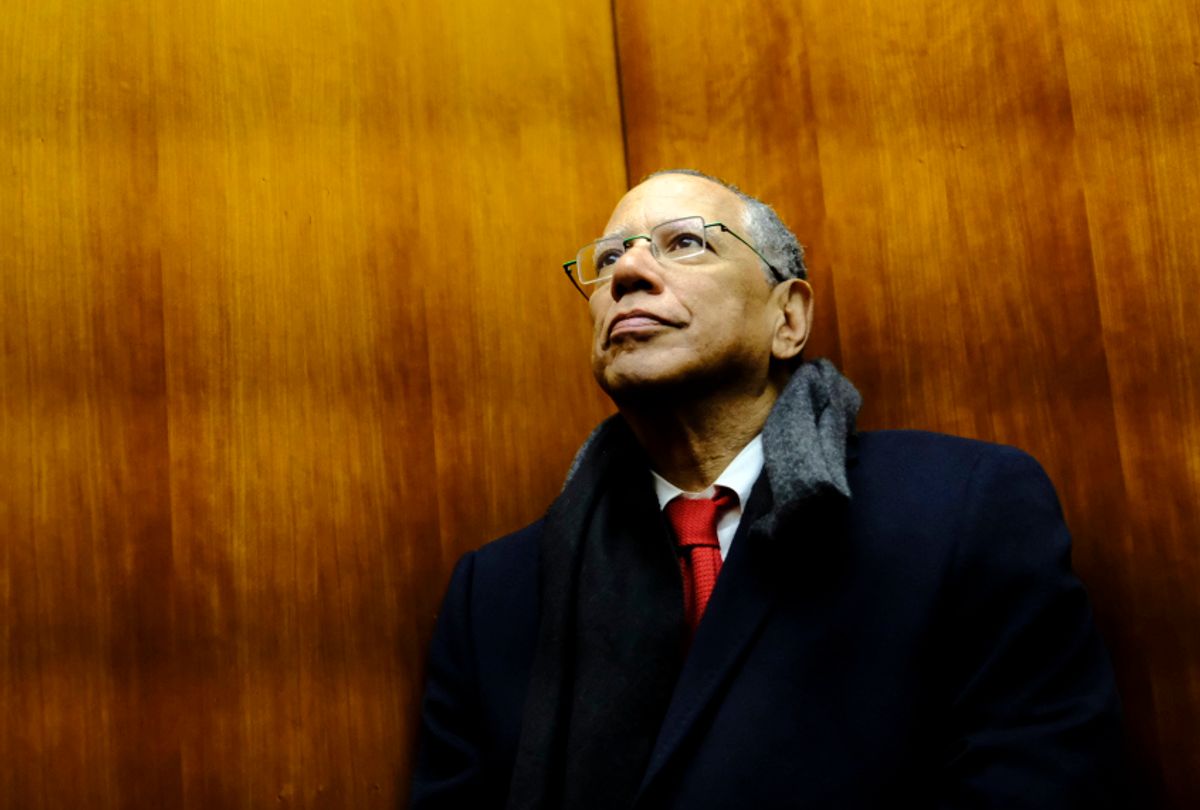 One scene in Liz Garbus’ documentary series “The Fourth Estate” beautifully illustrates the mixed blessing, if one could call it that, of being a journalist in in the Trump era: New York Times White House correspondent Maggie Haberman settling in to the press section at an event for law enforcement officials. President Donald Trump is minutes from taking the podium when, suddenly, she receives a notification on her phone.

Haberman looks at the screen and audibly curses. She surreptitiously glances around her, searching the room for similar reactions before putting her poker face on and typing furiously on her laptop. The tip that came her way? Reince Priebus had been fired from his position as White House chief of staff, replaced with John Kelly.

While she writes up her scoop, Trump tells the assembled officers, “you see these thugs being thrown into the back of a paddy wagon . . . I said, please don’t be too nice. Like when you guys put somebody in the car and you’re protecting their head, you know, the way you put their hand over? . . .  I said, you can take the hand away, OK?”

Still typing, Haberman looks up at what’s unfolding in front of her with a slight expression of dismay on her face, then looks back down at her laptop, shaking her head all the while. She hasn’t even finished one major bombshell of a story, and another is igniting right there in the room.

If the 24-hour cable news cycle turned journalism into an ceaseless stream, “The Fourth Estate,” premiering Sunday at 7:30 p.m. on Showtime, shows how the present administration has transformed the news business into a raging, whitewater rapids, and tasking the people who work in it to chug away — but very carefully.

The sheer volume of breaking news has made daily journalism into a taxing profession, and “The Fourth Estate” shows us what a toll it takes on the people who have dedicated themselves to it. One Times reporter admits he’s unmarried and has no family, that this is all he does. And we can see that. Never is he seen in moments of downtime.

Haberman admits that she regrets telling her kids they’d get her back after the election was over. She thought she’d be done covering Trump. How wrong she was. For her trouble, we see her step out of calls to have valuable and fleeting moments to FaceTime with her son, reassuring him in one scene that he can’t die in his nightmares.

Humanizing reporters and journalism itself may be the service that “The Fourth Estate” series offers. This is especially necessary in an era where the president uses social media to decry any coverage he doesn’t like as “fake news.” Such hyperbole is horrifying in the abstract, but watching a reporter’s expression darken upon hearing the President of the United States declare journalists to be “enemies of the people” is undeniably potent.

Garbus conceptualized “The Fourth Estate” a couple of weeks following Trump’s election on November 8, 2016, when the President-elect first began openly attacking journalists and the organizations they work for at press conferences. This led her to approach the paper Trump so famously refers to as the “failing” New York Times with the intent of capturing 16 months in the life of its newsroom, starting on Day 1 of Trump’s presidency.

From the opening moments of the docuseries, Garbus and her team maintains a tight focus on the people who cover the news as opposed to the stories themselves, and that alone provides a service to the profession.

Rather than evoking a sense of being under siege, the series shows reporters featured in “The Fourth Estate” as simultaneously invigorated and exhausted at the prospect of doing their jobs at a time in an unfriendly and politically divided climate. The paper’s executive editor, Dean Baquet, admits on that first day that understanding the new president and covering him will be difficult, but “great stories trump everything else, right?’’

Although this is faint praise, “The Fourth Estate” deserves credit for existing as a record of what it’s like to work at a newspaper at a time of massive transition, politically, economically and within the industry. Only people who have worked in a newsroom really know what the concept of having ink in your veins really means, but Garbus shows such passion in action here.

But that also makes a viewer wonder whether it will be possible for Garbus’ documentary to not only cut through the static of Peak TV to gain an audience but to keep that audience’s attention.

The overarching drama of journalism and the adrenaline, nervous sweat and stress poured into every decision, right up to the moment an editor hits “publish,” is the engine of “The Fourth Estate.”

“Great historians can take a decade to write a book about what amounts to a blip in the life of a country, right?” Baquet says as the series shows him riding the morning train into the Times’ Manhattan offices. “But we have to do a version of that every day.”

But this emphasis on the fret and care that goes into every word in every story, especially those that shift the conversation and attract the ire of the president, can also drag the energy down. The turgid series opener exemplifies this.

Even people who have some familiarity with a newsroom will feel every bit of its 90 minutes and breathe a sigh of relief at knowing that future episodes last only an hour (and begin at 8 p.m. on subsequent Sundays). The average viewer, meanwhile, may question the worth of a series that slowly recaps news that feels ancient by now — and does so via the perspective of a bunch of people with pale faces and furrowed brows tucked into cubicles and hunched over keyboards.

The series also reveals The New York Times to be a model for one of mainstream media’s biggest problems: Despite the series' focus on the paper’s stars, including Haberman, as well as Baquet, who is black, and Washington Bureau Chief Elisabeth Bumiller, what stands out is how white and male the newsroom is.

Nevertheless, when “The Fourth Estate” hits its stride, it provides quite an education about the challenges facing every news outlet, concretized in one of America’s top publications. A.G. Sulzberger, who took over as publisher in 2017, optimistically explains that there’s honor in keeping the paper in his family. “We’re not driven by clicks,” he says. "We think in decades.”

Then he admits the advertising model that supported that philosophy for decades, print journalism, is dying off. And Garbus’ cameras are there to show one of its writers admitting the feeling of humiliation at seeing The New York Times shrinking by seven floors because they’re losing news share and revenue to Google and Facebook.

Business models aren’t particularly interesting to the average viewer, but the impact of those decisions on the people in newsrooms raises the narrative's emotional stakes. Baquet explains the cost of remaining competitive at a time when the better-funded Washington Post, owned by Amazon founder and multibillionaire Jeff Bezos, has more resources to throw at its coverage. To hire more reporters, they have to free up revenue, which translates to layoffs on the copy editing desks.

The journalists featured in each of the four episodes generally refrain from mugging for the camera with a few exceptions. When Glenn Thrush declares with hammy vigor, “This is pretty damn cool, and I love working for this paper” and “I’m a fan of voice, right?” you can almost envision late night comedy writers salivating at the potential for parody.

Or they can just wait for a few episodes, when that swaggering lack of awareness comes back to bite him in the form of sexual misconduct allegations, part of the #MeToo wave begun by his own paper’s reporting on Harvey Weinstein's decades of sexual abuse and assault allegations. To the papers' credit Garbus' cameras were allowed to keep on rolling in the midst of it.

Mind you, anyone who views journalism as biased and exploitative probably won’t be moved by watching scenes of the walkout where veteran editors engage in a quixotic battle for jobs that are already lost. Nothing about “The Fourth Estate” will change minds already set against the legitimacy of the mainstream media.

Garbus’ documentary exists as a measured counterweight to powerful efforts to sow disinformation and silence fact gathering, and that’s important in itself. But it doesn’t hurt to witness the reporters' tenacity in the face of metastasized anger.

And this extends beyond situations placing them in physical proximity to Trump. When a reporter heads into the heartland to interview working class people impacted by the administration's policies, he’s met at one point by a man who vehemently tells him, “Here’s the deal: We hate you guys.”

The Times' reporter's response isn’t to become defensive. Instead, he calmly says he understands, and continues to do his job.

A new strategy for work-life balance