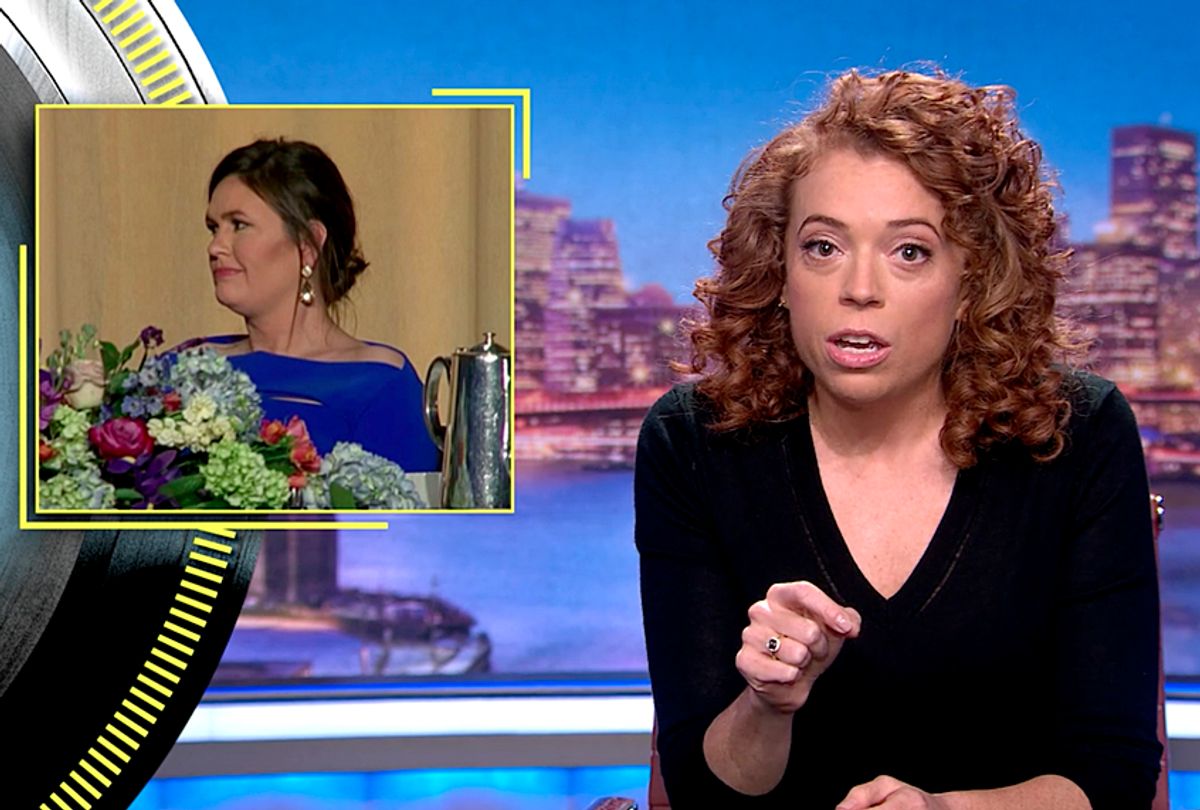 "The Break with Michelle Wolf" (Netflix)
--

Michelle Wolf doubled down on her jokes about White House press secretary Sarah Huckabee Sanders on Sunday during the first episode of her new Netflix show, "The Break with Michelle Wolf."

"She has the Mario Batali of personalities," said Wolf during a segment titled "Sports Smash." The comedian began the segment by saying she wanted to discuss feminism and asked, "Do women have to support other women?"

"No, of course not! If we did, Hillary would be president and I don’t think she is," answered Wolf. She then brought up Gina Haspel, President Donald Trump's recently approved head of the CIA. "The first woman head of the CIA — that’s great! Who knew you could waterboard a glass ceiling until it broke?" asked Wolf, referencing the resistance Haspel faced from some in Congress over her beliefs surrounding the CIA's use of torture.

Wolf mentioned how her "best friend" Sanders had previously written a confrontational tweet, stating that any Democrat who disapproves of Haspel but claims to support women's empowerment is "a total hypocrite."

"There is no one more qualified to be the first woman to lead the CIA than 30+ year CIA veteran Gina Haspel," tweeted Sanders. "Any Democrat who claims to support women's empowerment and our national security but opposes her nomination is a total hypocrite."

"Well, if anyone's an expert on hypocrites, it's Sarah Huckabee Sanders," retorted Wolf. "And for the record, that was not a looks-based joke. That was about her ugly personality," she added, referencing a remark she made during the White House Correspondents' Dinner last month, which launched her feud with the press secretary. The comedian then drew comparisons between Sanders and the celebrity chef, who is currently under criminal investigation after allegations of sexual misconduct were made against him.

Wolf's recent comments about Sanders seem to have struck a nerve with conservatives in particular.

On Tuesday morning, "Fox & Friends" spent a segment blasting Wolf as "vile" and "malicious" over her new remarks about Sanders and Haspel.

"Michelle Wolf represents a very angry, militant type of feminism that's very hypocritical," said RNC spokeswoman Kayleigh McEnany. "We see this on the left repeatedly, instead [the left] tears them down in a malicious, angry, vile way."

Appearing on Tuesday morning on "Fox & Friends," Conway said that she remembers "when comedians were funny."

"I hardly saw that, but all I can talk about is Sarah. I love working with her every single day here at the White House," said Conway. "She does a wonderful job representing the president and speaking to America on what is a very fast-moving agenda here."

During the White House Correspondents' Dinner, Wolf took jabs at the press secretary among others, and compared her both to a macho softball coach and a character from "The Handmaid's Tale." But perhaps it was her joke focusing on Sanders' professional conduct that received the most backlash from outraged Trump supporters.

"I actually really like Sarah. I think she’s very resourceful," said Wolf at the event. "Like, she burns facts and then she uses that ash to create a perfect smoky eye. Like, maybe she's born with it, maybe it's lies."

The joke was received by some as a dig at the press secretary's physical appearance, and Wolf was quick to remind critics that her comments about Sanders at the event were focused on her tenure at the Trump White House.

"All these jokes were about her despicable behavior," Wolf tweeted in response to New York Times journalist Maggie Haberman, who praised Sanders for sitting through a routine that criticized her physical appearance and job performance.

Wolf has since said that she "wouldn’t change a single word that I said," at the event.

In response to Wolf's defense, Sanders said, "That evening says a whole lot more about her than it does about me ... I hope that [Wolf] can find some of the same happiness that we all have, because I think she may need a little bit more of that in her life because the rest of us here are doing great."