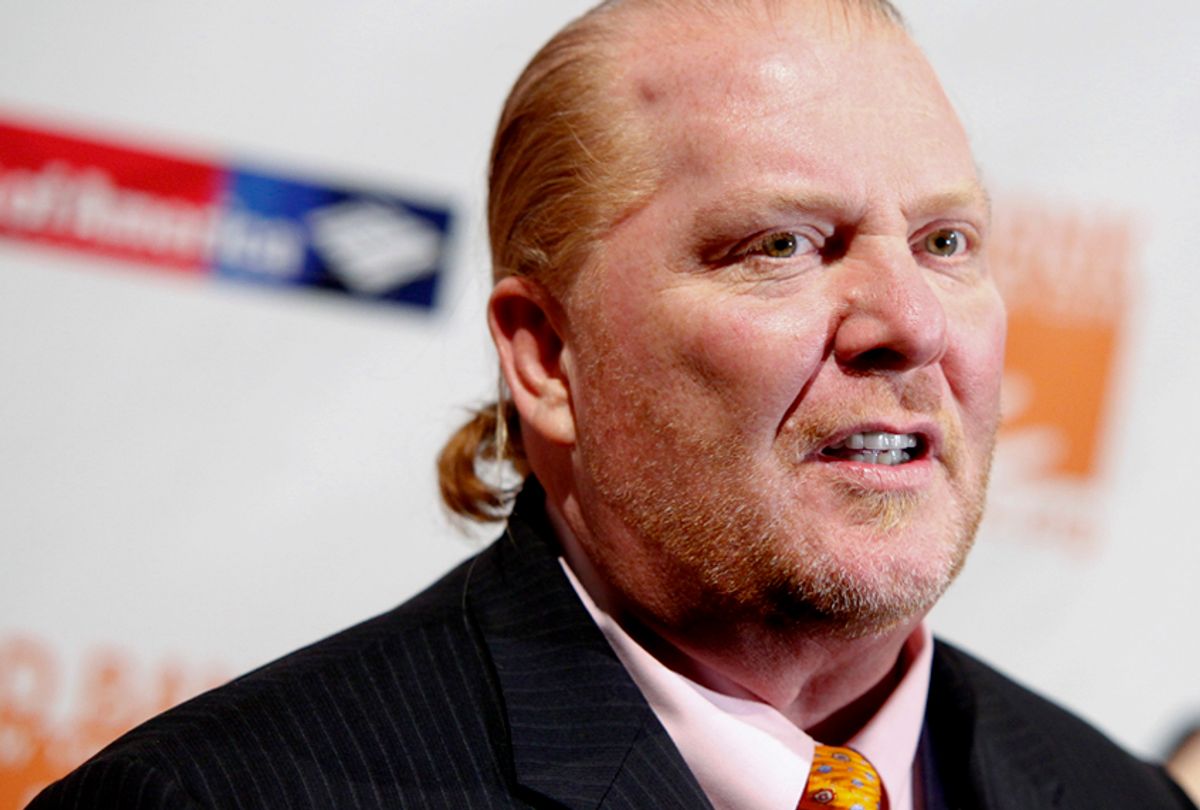 Disgraced celebrity chef Mario Batali was the center of Sunday night's "60 Minutes" episode amid multiple allegations of sexual harassment and assault. The New York Police Department confirmed to the show that he is under an "ongoing criminal investigation."

The NYPD did not provide any more details, nor what Batali is being investigated for, but there have been nearly a dozen women who've come forward accusing him of various degrees of sexual misconduct. Several women who used to work at The Spotted Pig, a New York restaurant Batali frequented, spoke to Anderson Cooper about a pervasive culture of sexual violence there and one with no boundaries or consequences. This includes the claims that Batali tried to sexually assault an unconscious woman, drugged and assaulted another, and groped and repeatedly sexually harassed the female staff.

The Spotted Pig was co-owned by Batali's close friend Ken Friedman; the chef was also an investor. So beyond Batali's fame, his connection to and financial power over the restaurant's staff was enormous. Further, the employees said there was no meaningful avenue to report allegations against Batali. Co-owners Friedman and chef April Bloomfield, who own seven restaurants together, did not have a full-time human resources department until last year, according to "60 Minutes," 14 years after they went into business together.

Trish Nelson, a waitress at The Spotted Pig who often served Batali, called him a "monster" and said that collectively, the staff referred to him as "the Red Menace." "It was a warning," she told Cooper. "The Red Menace is here. You know, like, pull all of your bits in, Mario's in town." A manager at The Pig, Jamie Seet said Batali grabbed her breasts, and when she complained to co-owner Friedman, he told her: "Oh, don't worry about it, it's just Mario," she said. (Other women described alleged sexual abuse from Friedman, which has been detailed in exposés about his conduct).

In one incident dating back to 2005, a female employee of one of Batali's restaurants said he invited her to The Pig for a party. She remembers sitting alone with Batali, drinking wine, and then her memory goes "foggy." "And this is — part of the messy, scary part for me," she told Cooper. "There is a part where it — it all disappears. I remember a moment where I was on his lap, kissing him. Like, he was kissing me. And then I remember throwing up — in a toilet. And that is all."

She says she woke up later that night on the floor in an empty room with broken bottles. "The first thing I think is, 'I've been drugged.' That was the first thing I thought is, 'I've been — I've been assaulted,'" she said. Her right leg was "deeply wounded," and while she ruled out rape, she said she saw semen on her skirt. She says she called a crisis hotline, was examined at a hospital and went to the police, but declined to file a police report out of fear of repercussions. She was still Batali's employee.

Batali "vehemently" denied the allegation in a statement to "60 Minutes":

I vehemently deny the allegation that I sexually assaulted this woman. My past behavior has been deeply inappropriate and I am sincerely remorseful for my actions. I am not attempting a professional comeback. My only focus is finding a personal path forward — a path where I can continue in my charitable endeavors — helping the underprivileged and those in need.

But in another similar incident detailed on the show, Seet and three other employees said they saw Batali on camera sexually assaulting a woman who appeared to be unconscious after a party at the restaurant. They intervened and told Friedman, but never went to the police and no action was taken.

The accusations spotlighted in "60 Minutes" expand upon previous claims made against Batali, which were first published by Eater in December. More women came forward the next day, on Twitter, to The New York Times and to The Washington Post, accusing Batali of different forms of abusive behavior. Shortly after the numerous exposés, Batali was fired from his midday cooking show on ABC, "The Chew," and he announced that he was "stepping away" from his multi-million dollar restaurant empire.