Like Rudy Giuliani at a recent Yankees home game, Tennessee GOP Senator Bob Croker gets a cold reception at home 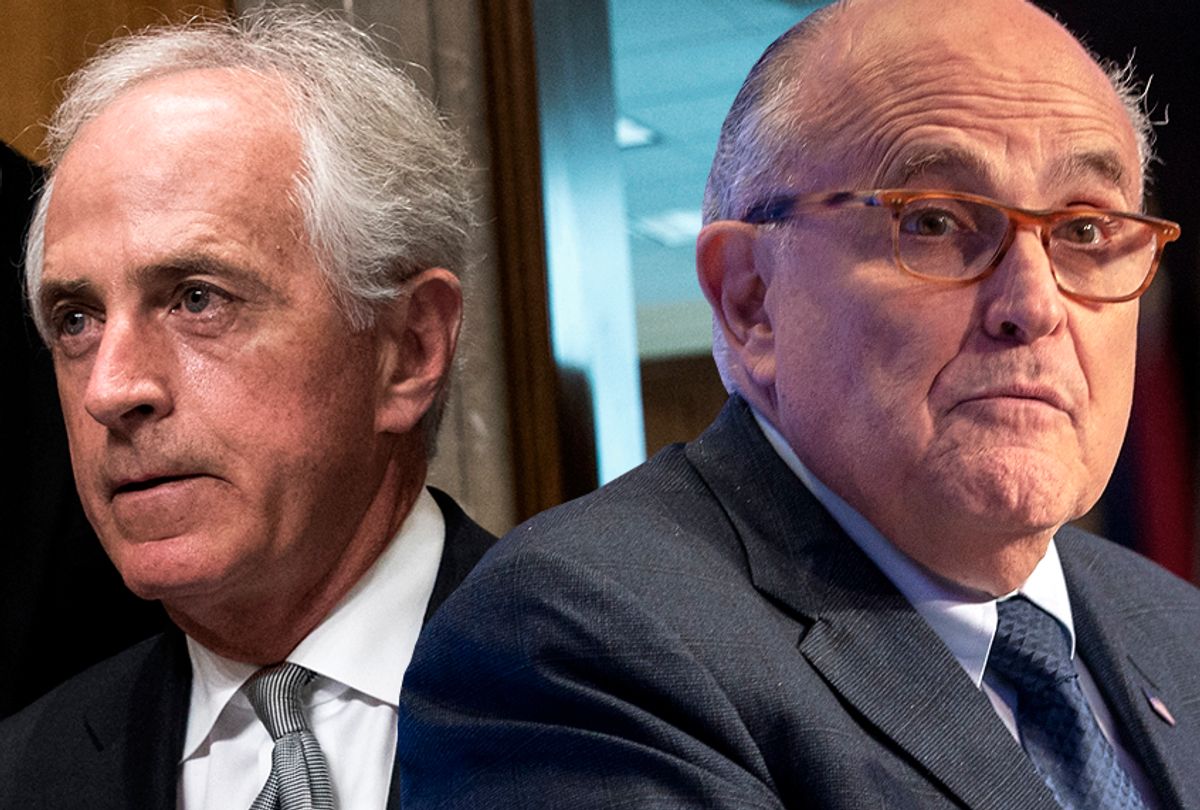 When President Donald Trump mentioned Sen. Bob Corker, R-Tenn., at a rally on Tuesday, the crowd began to boo their own incumbent legislator.

"That's a lot of people back there! That's a lot of people! Fake news!" Trump orated at a rally in Nashville on Tuesday. The crowd was loudly booing as Trump described the reporters who were there to cover the event, although that subsided when he mentioned the name of one of their incumbent senators, Lamar Alexander.

Then he mentioned the other incumbent senator, Bob Corker, who was greeted with a cacophony of boos. Trump did not stand up for the Senator, instead proceeding to complete his remarks introducing Blackburn.

"And finally the person we are all here tonight to support, the next United States Senator from the great state of Tennessee, a very, very early supporter of ours and a really wonderful woman. She loves your state. She loves your country. She's going to win. Marsha Blackburn," Trump told the cheering crowd.

The booing was most likely due to Corker's ongoing feud with the president. Most conspicuously, Corker and Trump butted heads in October after Trump posted a series of tweets criticizing the Tennessee senator for his opposition to aspects of the president's policy agenda.

"Senator Bob Corker 'begged' me to endorse him for re-election in Tennessee. I said 'NO' and he dropped out (said he could not win without ... my endorsement). He also wanted to be Secretary of State, I said 'NO THANKS.' He is also largely responsible for the horrendous Iran Deal! Hence, I would fully expect Corker to be a negative voice and stand in the way of our great agenda. Didn't have the guts to run!" Trump wrote in a series of three tweets.

Corker responded with only a single tweet, albeit one that proved devastatingly memorable.

"It's a shame the White House has become an adult day care center. Someone obviously missed their shift this morning," Corker wrote.

Earlier that year, Corker had also harshly criticized Trump for saying that there was blame on "both sides" at a white nationalist rally in Charlottesville, Virginia where one anti-racist protester had been murdered.

"The president has not yet been able to demonstrate the stability, nor some of the competence, that he needs to demonstrate in order for him to be successful — and our nation and our world needs for him to be successful, whether you are Republican or Democrat," Corker told a Rotary Club meeting in Chattanooga in August, according to The Tennesseean.

Although Corker has insisted that his opposition to Trump did not play a role in his decision to not to run for reelection this year (and he had previously stated that he only wanted to serve in the Senate for two terms), in April the Tennesseean was unwilling to definitively state whether he still would have voted for Trump in 2016 had he known then what he knows now about the president, according to The Washington Post.

"I just don’t have any desire to make news. So I’ll leave it at that," Corker finally answered after expressing uncertainty over the matter for four days.

During the Nashville rally, Trump focused on attacking Phil Bredesen, the former Tennessee governor who will be running against Blackburn in November.

"He’s an absolute, total tool of Chuck Schumer and of course the MS-13 lover Nancy Pelosi," Trump told the excited audience about Bredesen, who he also pointed out gave money to and endorsed Hillary Clinton during her presidential campaign.

"If Bredesen were ever to get elected, he would do whatever Chuck and Nancy — remember the term, 'Chuck and Nancy?' They don't want the wall, they want open borders, they're more interested in taking care of criminals than they are of taking care of you — Bredesen donated a lot of money to the campaigns of Barack Obama and Hillary Clinton," Trump told the alternately cheering and booing crowd, according to CNN.

Ironically, the issue of public booing has also impacted one of Trump's closest allies this week.

Former New York City Mayor Rudy Giuliani was subjected to boos when his birthday was mentioned at Yankees Stadium over the weekend, a reflection of Giuliani's controversial defenses of Trump in his new capacity as one of the president's lawyers. Even some of Trump's fellow Republicans have been distancing themselves from the president, expressing a willingness to support his policy agenda while disapproving of his personal behavior.

" I don't consider the president a role model for my kids. I don’t want my kids to speak the way he speaks or make some of the choices, and it has been the challenge for quite a bit of time to say, how do you balance this out between policy and personal behavior in the way he has his own unique style," Sen. James Lankford, R-Ok., told MSNBC in an interview published on Sunday.

It must be remembered that, although Republicans like Corker and Lankford have spoken out against the president, they have not gone so far as to oppose him on most matters of ideological substance. Indeed, even though Corker was initially critical of the president's signature tax reform bill, he ultimately switched his vote at the last second and voted for it (a move that his critics alleged was motivated by the inclusion in the bill of a provision that would personally enrich Corker, although he denies there was any connection between that and his change of vote).

Charlie Sykes: The GOP is "in the thrall of the NRA"

A discussion about the one group that the GOP dares not oppose (for some reason), the NRA.