Roseanne Barr returns from Twitter exile to lash out at co-stars: "You threw me under the bus" 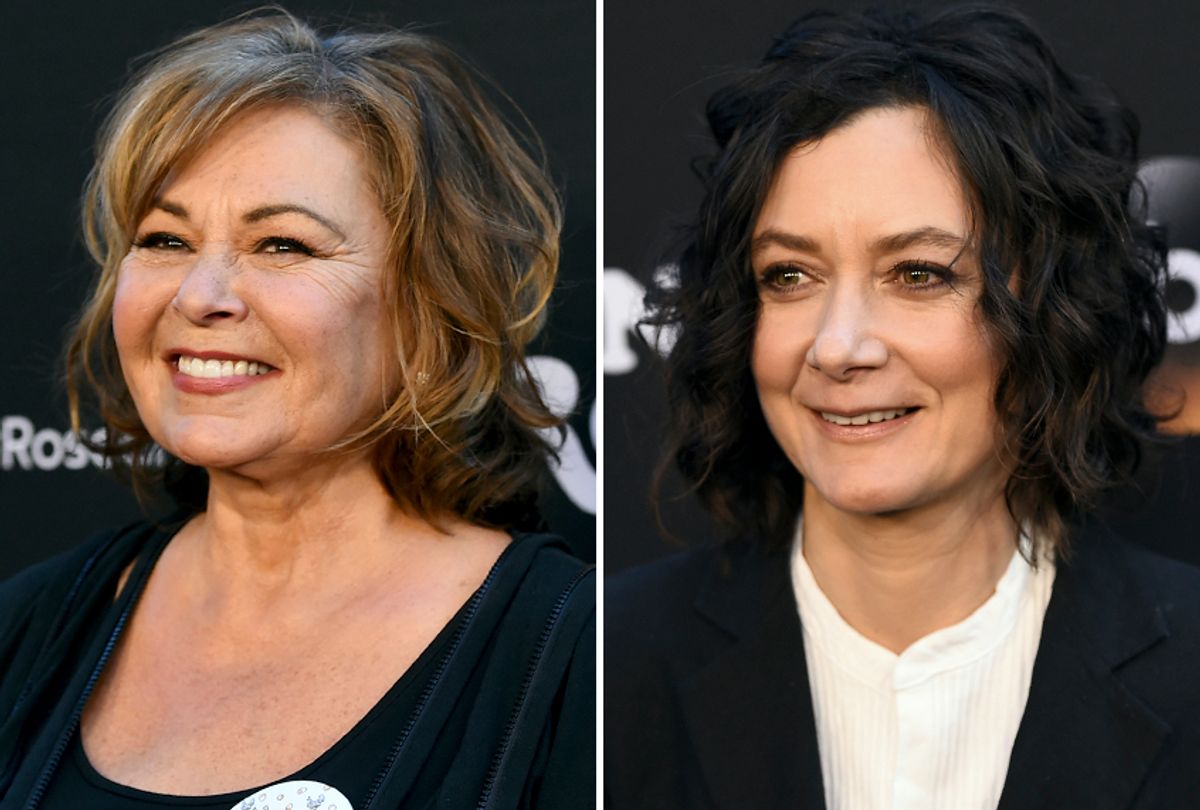 With Roseanne Barr's career as a TV star effectively ending within a few hours on Tuesday morning, her self-imposed Twitter exile came to nearly as swift an end Tuesday night when she returned to the social media platform that cost her her hit ABC sitcom, to lash out at her co-stars.

Although she retweeted a post by "Roseanne" co-star Sara Gilbert that described her comment about Valerie Jarrett as "abhorrent," she also retweeted this comment from a follower that claimed her co-stars didn't deserve sympathy because "they threw her under the bus instead of having their non-racists' co-stars back!"

To the actor who portrays D.J. Connor on the show, Michael Fishman, Roseanne responded to his statement condemning her racist tweet by accusing him of throwing her under the bus:

Roseanne has also been retweeting support from media figures who are particularly popular among either mainstream conservatives or President Donald Trump's far right-wing supporters, even if many of those deny being "alt-right" themselves.

Take for instance Jack Posobiec, an "alt-right" troll best known for his attempt to spread the discredited Pizzagate conspiracy theory. Pizzagate was the belief that Hillary Clinton's inner circle was running a sex trafficking ring centered out of a pizza restaurant in Washington, D.C. Posobiec also infamously held up a "Rape Melania" sign at a Trump rally in an attempt to smear liberals.

Here are some of Roseanne's other retweets in that vein

Each of these tweets deserves to be scrutinized, both because of who wrote them and what they say.

Katie Hopkins is a British media personality who has been widely criticized for promoting racist views. In 2016, MailOnline had to pay £150,000 in libel damages to a Muslim family who were denied access to the United States after Hopkins falsely accused them of having ties to extremist groups, according to the BBC. She was also fired from LBC in 2017 after posting a tweet which called for a "final solution," during a longer rant against Muslims, according to The Guardian. Since then, she has become a contributor to a far right-wing site called The Rebel.

Ben Shapiro, the founder and editor-in-chief of The Daily Wire, is a bit of an outlier here, given that he has been one of the few prominent conservative voices to consistently criticize President Donald Trump, and he accused his former employer, Breitbart, of becoming "Trump's personal Pravda," a reference to the state newspaper of the Soviet Union. Nevertheless, Shapiro has long enjoyed calling out what he perceives to be the hypocrisies of the left, and Roseanne's retweeting of his perspective is telling because — despite his agreement with ABC's decision to fire her — he used that as an opportunity to attack the left for its criticisms of the NFL for trying to stifle the player protests.

Finally, there is Paul Joseph Watson, the editor-at-large for InfoWars.com and a contributor to The Alex Jones Show. If you know anything about the conspiracy theory-prone Jones, you know everything you need to about Watson. Although he frequently describes himself as a "classical liberal," he is most popular among the right-wing fringe that is attracted to Jones' show and worldview. It is also worth noting that Watson has referred to his brand of conservatism as being "counterculture," a characterization that seems to also apply to how Roseanne views herself.

It is also worth looking at some of the tweets Roseanne has deleted within the past 24 hours.

For one thing, she is no longer leaving up the posts that blamed her predicament on taking the sleep-inducing drug Ambien. The original tweets had claimed that "it was 2 in the morning and I was ambien tweeting-it was memorial day too-i went 2 far & do not want it defended-it was egregious Indefensible. I made a mistake I wish I hadn’t but…don’t defend it please," according to Deadline. She later tweeted, "I've done weird stuff while on ambien-cracked eggs on the wall at 2am etc."

It's hard to say if Roseanne deleted those tweets because she was being ridiculed or because she has decided to own her earlier comments. After all, former presidential adviser Valerie Jarrett wasn't the first powerful African-American woman who Roseanne demeaned by calling an ape. She did the same thing to Obama's national security adviser, Susan Rice, when in 2013 she referred to her as a "man with big swinging ape balls."

The tweets she has posted since being fired from ABC for comparing Jarrett to an ape suggest that she may be poised to follow in the path blazed by President Donald Trump when he became a persona non grata for advancing the racist birther conspiracy theory in 2011 — that is, embrace an identity as a right-wing media personality.

This is notable because, although Roseanne has certainly retweeted and affirmed a lot of far-right opinions in the past, she is doing so now within a completely new context — one in which she can reasonably assume that her show business career is over, and, consequently, her most public space will need to establish how she is perceived in the future. For one thing, even if Roseanne was somehow able to convince another network to pick up her show, it is hard to see how she could repair the frayed relationships she now has with her co-stars.

Roseanne's new fans in MAGAland should keep in mind, however, that she hasn't shied away from political aspirations in the past. In 2012 she ran a high-profile campaign for the Green Party presidential nomination against its eventual winner, Jill Stein, at a time when she was depicting herself as a member of the far left.

It is obvious that Roseanne has strongly held political views and would like to become a figure on the national political stage. While it is doubtful that this is the way she would have chosen to pursue that career, that doesn't mean she won't (in her own mind) try to make lemonade from the lemons she has cultivated.