Jason Seaman in Indiana and James Shaw Jr. in Nashville were both heroic. Why is only one lavished with praise? 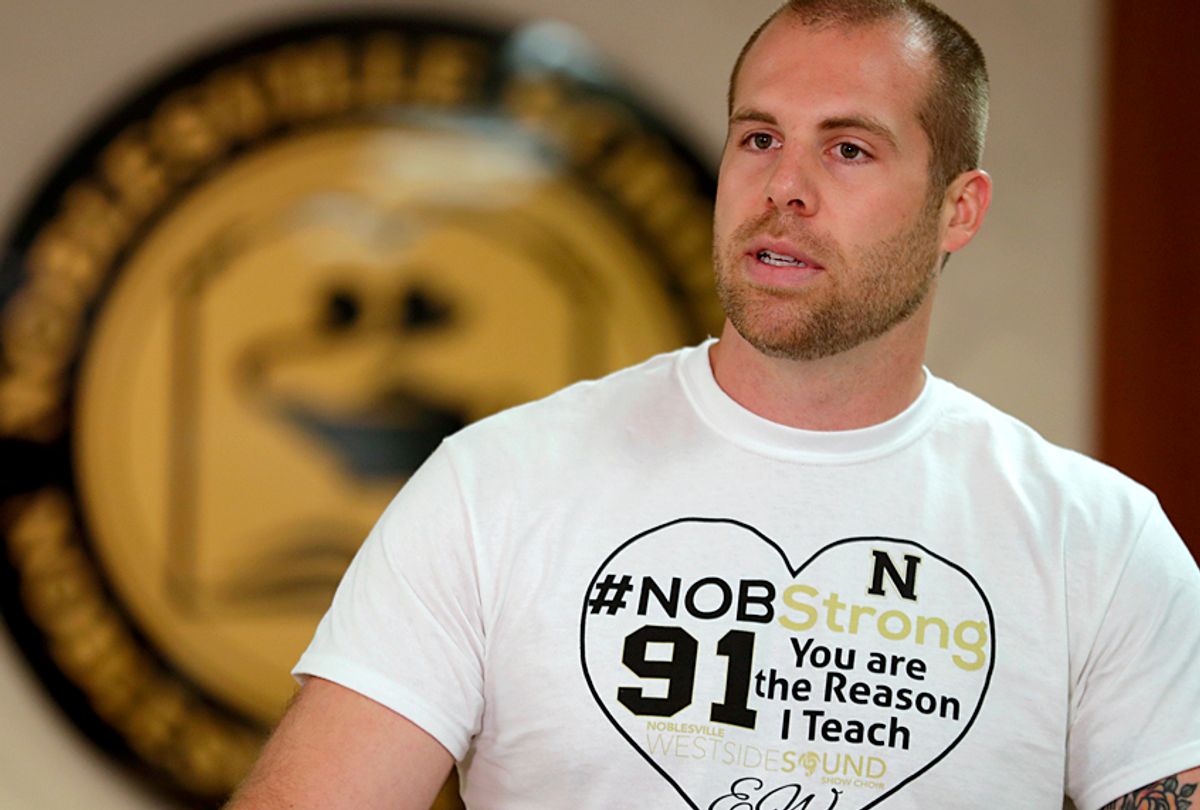 Jason Seaman, a teacher at Noblesville West Middle School, speaks during a news conference, May 28, 2018. Seaman tackled and disarmed a student with a gun at the school on Friday. (AP/Michael Conroy)
--

Jason Seaman is a hero. Last Friday, he defended the children in his classroom at Noblesville West Middle School in Indiana from a would-be mass murderer. Unarmed, he tackled a student who had returned to class brandishing two guns. Jason Seaman was shot three times. Seaman's body channeled the sacred duty given to him to educate and protect the children in his care: He was a human shield.

James Shaw Jr. is a hero. On April 22, using only his bare hands, Shaw confronted and disarmed an apparent white supremacist named Travis Reinking, who was armed with a military-style assault rifle and had just killed four people and wounded two others at a Nashville Waffle House restaurant. Reinking wanted to kill more black and brown people and certainly would have, if not for the heroic actions of James Shaw Jr.

Both men are very humble. Seaman told reporters on Monday that he is a “person who isn’t looking for attention." Likewise, Shaw told reporters that, “I’m not a hero. . . . I’m just a regular person. I think anybody could have did what I did if they’re pushed. You have to either react or fall. I chose to react because I didn’t see any other way to live.”

On Saturday, President Donald Trump immediately praised Jason Seaman. On Twitter, Trump announced, "Thanks to very brave Teacher & Hero Jason Seaman of Noblesville, Indiana, for his heroic act in saving so many precious young lives. His quick and automatic action is being talked about all over the world!" James Shaw Jr. received no such immediate honor or praise. Donald Trump eventually called him -- three weeks late. Shaw described Trump's phone call as "lackluster."

What is the difference between James Shaw Jr. and Jason Seaman? Seaman is white. Shaw is black. For Trump, the skin color of Jason Seaman makes him worthy of effusive public praise. By comparison, Shaw's skin color deems him less so. As I explained in an earlier essay here here at Salon:

The explanation for Trump's relative silence is obvious. Trump, his advisers, his political party and their media allies have thrived on their contempt for the humanity, dignity, and freedom of black and brown people. Honoring a black man for stopping an armed white man during what may have been a racially motivated killing spree runs counter to Donald Trump's political worldview and personal morality.

Once again, with his immediate praise of Seaman and comparative silence towards Shaw, Donald Trump has revealed his true character. He is an obvious and clumsy racist. He does not hide behind the voguish, "edgy" arguments made by New Age race scientists such as Charles Murray, Nicholas Wade, Andrew Sullivan and others who pander long-discredited ideas about how "race" and IQ are connected or that people are like dogs which can be bred into distinct subspecies and breeds. Nor does Trump bother to hide behind "statistics" and "race neutral outcomes" to work the gears of social engineering to maintain and expand white supremacy. He is the naked obvious id of white America.

Why does Trump act this way? More importantly, why do millions of white Americans -- and the Republican Party as a whole -- not find his obvious racism and bigotry repellent? Why do they not abandon him?

From the end of the civil rights movement through the birth of the Southern Strategy and now to the present, the Republican Party has opposed the full and equal rights of black and brown Americans. Republican elites may not like Trump's crude, public racism, but on a fundamental level they do not disagree with him: White privilege is to be protected at all costs; white people are to be the dominant political social and economic group, no matter what -- even if that requires colluding with a foreign power to undermine American democracy.

Republican voters share this sentiment. This need to defend the power of white Americans over all others is especially felt by Trump's voters. Public opinion polls and other research also shows that this is a sentiment and anxiety felt by many white Americans as a group.

Trump's crude and obvious racism is also cheered on by his supporters as a way of "triggering the libs." This is the stuff of childish contrarianism and spite, where serious, life-and-death matters of human decency and a belief in equal rights under the law and in civil society are reduced to a game.

This war on "political correctness" is also a function of spite, mule-kicks by a group of people who feel increasingly obsolete and looked down on in what they feel is an unfamiliar, unwelcoming America where other people are "cutting ahead in line."

Sociologist Arlie Hochschild, author of "Strangers in Their Own Land: Anger and Mourning on the American Right," explained this sentiment in a 2016 essay for Mother Jones.

What the people I interviewed were drawn to was not necessarily the particulars of these theories. It was the deep story underlying them — an account of life as it feels to them. Some such account underlies all beliefs, right or left, I think. The deep story of the right goes like this: You are patiently standing in the middle of a long line stretching toward the horizon, where the American Dream awaits. But as you wait, you see people cutting in line ahead of you. Many of these line-cutters are black — beneficiaries of affirmative action or welfare. Some are career-driven women pushing into jobs they never had before. Then you see immigrants, Mexicans, Somalis, the Syrian refugees yet to come. As you wait in this unmoving line, you’re being asked to feel sorry for them all. You have a good heart. But who is deciding who you should feel compassion for? Then you see President Barack Hussein Obama waving the line-cutters forward. He’s on their side. In fact, isn’t he a line-cutter too? How did this fatherless black guy pay for Harvard? As you wait your turn, Obama is using the money in your pocket to help the line-cutters. He and his liberal backers have removed the shame from taking. The government has become an instrument for redistributing your money to the undeserving. It’s not your government anymore; it’s theirs.

In the crudest calculations of political power, Donald Trump and other Republicans face few if any negative consequences for their racism. Why? American politics is highly polarized and white racists are now firmly wedded to the Republican Party. While overt racism may be publicly shamed in post-civil rights era America, so far this has not translated into negative consequences at the ballot box for Republican candidates.

There is an enduring liberal optimism that Trump's enablers in the Republican Party and right-wing media, as well as his supporters among the public, will have a profound and sudden moment of critical self-reflection where they will see themselves and what they have done as decent people would. This will not happen.

Trump's crude and obvious racism is not a bug or a defect. It is a core feature of who he is. Those values are what attracted many of his voters in the first place. Ultimately, Donald Trump is a political black hole: How many more Americans will be sucked into his maw before this most tragic and horrible episode in American history comes to close -- assuming it ever does?

Young black men discuss the challenges they face growing up in America.