"Child abuse by government": How child-parent separation at the border is traumatizing kids

"'Child abuse by government,’ that’s the only way to describe [this] misguided policy," one expert explains 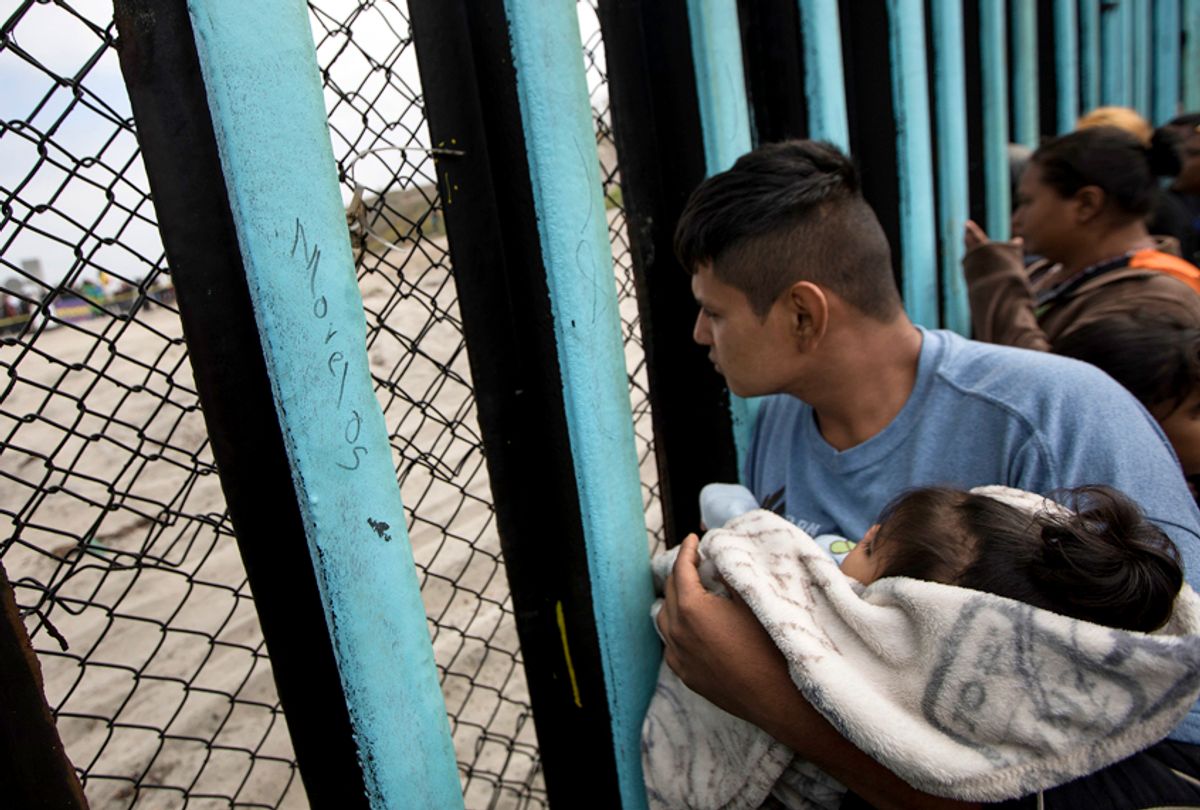 A member of the Central American migrant caravan, holding a child, looks through the U.S./Mexico border wall. (AP/Hans-Maximo Musielik)
--

President Trump and his administration acolytes have made it crystal clear that immigrants, refugees — pretty much any human who doesn't fit with their thin, racialized doctrine of acceptability — aren't welcome in the United States. That includes migrant children seeking refuge from an unlivable situation.

Regardless, the reports brought attention to the issue of undocumented minors and the ways that customs officials treat them, an issue that previously came to public attention in April when Jeff Sessions implemented a “zero tolerance” policy that set to criminally prosecute anyone who failed to cross the border at an official entry port.

Sessions' policy did not require to separate families at the border, but his zero-policy rule, in essence, unofficially mandates it. Thus, the Trump Administration has subtly weaponized the idea of familial separation to install fear in undocumented immigrants. This has led to a surge in family separations. The Washington Post reported there has been a 21 percent increase over the last month of migrant children held in U.S. government custody without their parents.

Politics aside, the fact is children are being separated from their parents in abrupt and injurious ways. In a lawsuit the American Civil Liberties Union recently filed against the government, a woman from El Salvador recalled the day her children were taken from her in March 2018.

“I was given only five minutes to say goodbye,” she wrote. “My babies started crying when they found out we were going to be separated.”

“In tears myself, I asked my boys to be brave, and I promised we would be together soon. I begged the woman who took my children to keep them together so they could at least have each other.”

There are many legitimate reasons why the government may separate a young child and their parents: sudden death of the parents or child abuse, to name a few possibilities. Yet when child mistreatment is instigated by the government, one that claims to care about children’s rights and well-being, it is worth questioning the government’s ethics. Indeed, substantial research has shown that early separation can cause severe psychological harm to a child.

Irwin Redlener, president emeritus of Children’s Health Fund and a professor of health policy and management at Columbia University’s Mailman School of Public Health, told Salon that new research over the last 10 to 15 years has shown that the impact of toxic stress can extend beyond psychological consequences. Redlener explained that when someone is stressed (a child or infant) stress hormones such as adrenaline and cortisol are released.

Redlener, who is a pediatrician, told Salon that policies calling for forced separation are maliciously abusive.

“We typically think of a child abuse and neglect as something that happens to children when parents or a guardian is over-disciplining, or engaged in acts of violence, sexual exploitation, or extreme neglect,” he said. “The federal government has created a policy which is cruel and abusive. Let’s call it what it is: ‘child abuse by government,’ that’s the only way to describe the consequences of the misguided policy.”

“All Americans should be horrified,” he added.

Dr. Robin Goodman, a licensed clinical psychologist and Executive Director and Program Director of A Caring Hand, said the trauma endured is likely to be different for each child, and it largely depends on how the separation occurred.

“PTSD reactions are certainly possible, and it might be related to how it happened and what was done,” Goodman told Salon. “These reactions will show up in different ways — in relationships with other people, how they think about themselves, negative beliefs beliefs about themselves, negative beliefs about the world, worried thoughts certainly might come... they might have thoughts of self-harm, and be upset and depressed.”

In the situation of separation due to immigration problems, a child can develop symptoms that resemble childhood traumatic grief, a condition that occurs after the death of a parent of guardian.

“Different challenges are present for children whose caregivers are still alive than for those whose caregivers have died,” the National Child Traumatic Stress Network explains. “For example, children with traumatic separation have valid reasons to hope for a reunion with the caregiver even if that reunion could not happen for many years or at all. Hoping for reunification with the caregiver can complicate the child’s ability or desire to adjust to current everyday life and to develop healthy coping strategies.”

The psychological impact can be particularly troubling for children, as their sense of safety and trust are threatened. Judith Cohen, Professor of Psychiatry at Drexel University College of Medicine, said these children have already likely experienced traumatizing events, which can compound the trauma that occurs during a parent-child separation.

“They are already vulnerable,” Cohen told Salon, adding that parental support after a traumatic event is critical and a proven factor in helping children recover. "We are traumatizing these kids through separation and putting them at risk for experiencing another level of trauma.”

Cohen agreed with Redlener that this constitutes an abusive act perpetrated by the government.

“As far as I can tell we are intentionally traumatizing children and harming them,” she said.

These sobering insights have moved some activists to take urgent action.

Glennon Doyle, an author and president of Together Rising, launched a campaign on Tuesday and quickly raised an estimated $1.4 million within 48 hours to hire lawyers and advocates for 60 migrant children who are currently sitting in an Arizona detainment center.

“It is torture,” Doyle told Salon. “We have all agreed that torture is non-negotiable for prisoners of war, but we are actively doing it now to innocent children.”

Doyle, who has also run campaigns to help provide aid to refugees in Aleppo and across Syria, added that it is the act of activism that can heal those who feel helpless in times of despair.

“So much is happening and people are feeling less safe and depressed,” she said. “This right now, this activism is what is healing people, it is what keeping people hopeful right now.”