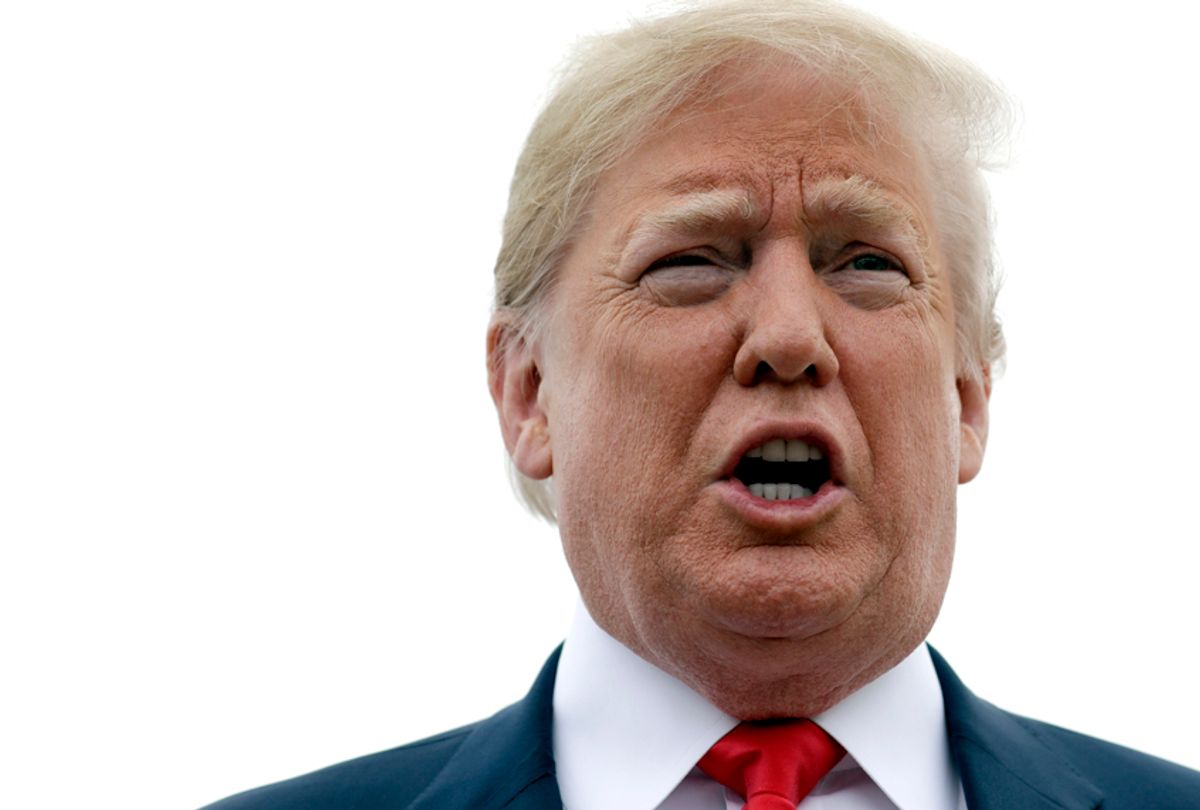 Donald Trump speaks to the media before boarding Air Force One for a trip to Texas to meet with families of the Santa Fe school shooting victims, May 31, 2018. (AP/Evan Vucci)
--

President Donald Trump was caught making glib comments about the families of the victims of the Santa Fe school shooting shortly before departing to meet with them on Thursday.

The shooting at Santa Fe High School on May 18 led to the deaths of 10 people and injured 13 more, according to The Texas Tribune.

The suspect, Dimitrios Pagourtzis, is believed to have used his father's guns to commit the mass shooting, although because he is 17-years-old it is unlikely that the family will face legal consequences for his actions (he is too old to fall under the state's child-access prevention law).

A poll taken of Texans after the shooting found that 54 percent now want to arm teachers and other school officials, while 49 percent of registered voters want stricter gun control laws. The latter figure actually counts as a decrease in the support for gun control, since 55 percent had said they would support such measures during another poll taken by the same organization (Quinnipiac University) on the previous month. Similarly, the number of people who would oppose stricter gun control laws has slightly increased from 41 percent in April to 45 percent this month.

That said, this doesn't mean that Texans are soft on those who perpetrate gun-related crimes. Sixty-four percent of the state's voters want parents to be held legally responsible if their children commit crimes with guns, with the same number saying that a law should be passed requiring guns to be kept under a lock and key. A whopping 93 percent of Texans want background checks on all gun buyers, roughly the same amount as felt that way during the April survey.

This isn't the first time that Trump has exhibited an empathy deficit for people who are dealing with the issue of mass shootings in American schools.

When meeting with a group of teachers and students about the mass shooting at Marjory Stoneman Douglas High School in Parkland, Florida in February, Trump was found to be hold a note that specifically reminded him to be empathetic, according to The Washington Post. The note included the following questions:

1. What would you most want me to know about your experience?

2. What can we do to help you feel safe?

Trump has had other high-profile incidents in which he has notably lacked empathy for the suffering of others. In October, he was involved in a public dustup with the widow of a soldier who was killed by Islamist militants in Niger. Myeshia Johnson, the widow, claimed that "the president said that he knew what he signed up for, but it hurts anyways... It made me cry because I was very angry at the tone of his voice and how he said it."

The first person to draw attention to Trump's insensitive handling of the situation, Democratic Florida Rep. Frederica Wilson, also described the phone call in scathing terms, according to The Washington Post. She described Trump's tone as being "almost like joking. He said, ‘Well, I guess you knew’ — something to the effect that ‘he knew what he was getting into when he signed up, but I guess it hurts anyway.’ You know, just matter-of-factly, that this is what happens, anyone who is signing up for military duty is signing up to die. That’s the way we interpreted it. It was horrible. It was insensitive. It was absolutely crazy, unnecessary. I was livid."

Instead of apologizing for his remarks, Trump insisted that "I didn't say what that congresswoman said. Didn't say it at all. She knows it. And she now is not saying it. I did not say what she said," according to CNN. He later posted a tweet to the same effect.

Trump never provided any evidence that Wilson had lied.

That same month, Trump also aroused controversy when he was seen casually tossing paper towels to victims of Hurricane Maria in Puerto Rico. As CNN reported at the time:

While surveying the damage in Puerto Rico after Hurricane Maria, President Donald Trump visited with survivors and helped distribute supplies -- at one point throwing paper towels into the crowd.

Upon entering a multipurpose room at the Calvary Chapel in the Guaynabo neighborhood of the island, Trump was met with cheers and supportive signs welcoming his presence.

The President began to pick up cans of chicken to show to the crowd and then handed one man a pack of batteries. Next, he held up a flashlight and showed it off while shaking hands with the Puerto Rico residents there to obtain provisions.

"There's a lot of love in this room," Trump said while giving out the supplies. "Great people."

Trump continued to raise different items up in the air for the patrons to see while shaking hands and passing out objects, before grabbing rolls of paper towels. Then Trump began to toss rolls of paper towels into the crowd. Several of the rolls were caught by Puerto Rico residents in the room, but a few fell onto the carpeted floor.

Trump later defended himself by saying that the people in the room wanted him to throw the paper towels, according to NBC News. During an interview with Mike Huckabee on the Christian network Trinity Broadcasting, Trump said that "I came in and there was a crowd of a lot of people. And they were screaming and they were loving everything. I was having fun, they were having fun. They said, 'Throw 'em to me! Throw 'em to me Mr. President!"

It remains to be seen whether Trump's reference to his upcoming trip to Texas as "fun" will create the same controversy as his need for notes on empathy after the Parkland school shooting, his bungling of the phone call to console a veteran's widow or his casual lobbing of goods to the hurricane-ravaged people of Puerto Rico. Even if it doesn't, though, the fact that this pattern exists makes it more likely than not that Trump will find other occasions to remind Americans of his considerable empathy gap.

Is Trump mentally fit to be president?