Let's not normalize the c-word: Why the "worst word" you can call a woman matters

Sam Bee weaponized it. Sally Field celebrated it. Anna Faris wants us to reclaim it. Let's keep it a nuclear option 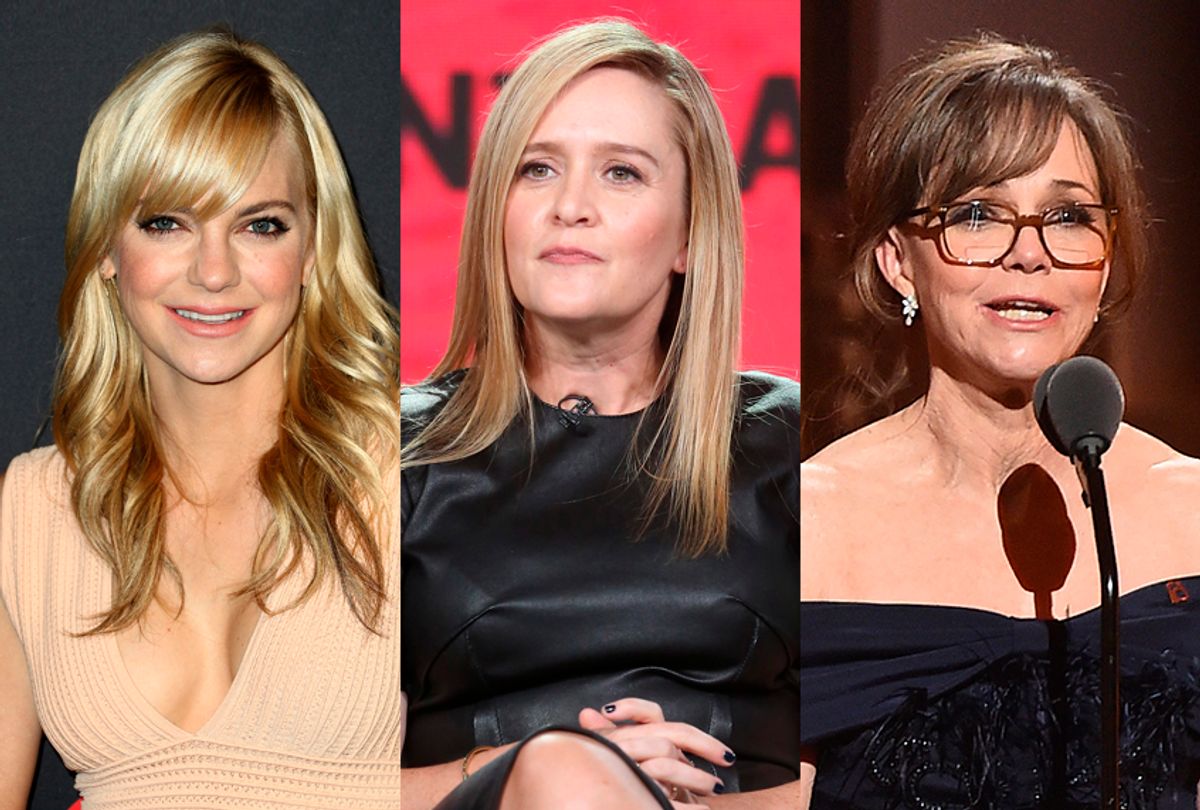 I had been venting over a plate of pancakes to an old friend, telling the elaborate story of how a woman I had once been close to had done something pointedly hurtful to my daughters. He put down his fork, looked me in the eye and said three little words. "What a c**t." It was beautiful. It was just what I needed.

For Americans, there's no word quite like the c-word. Other words, ones that bear the historical weight of prejudice and violence, have in recent years been reclaimed in some communities, while still deeply offensive outside of them. The f-words and s-words, while bleepable in family-friendly entertainment, have evolved into all-purpose declarations with multiple handy uses. And the long list of alternative phrases for male and female genitalia, while most frequently deployed as put-downs, don't carry a whole lot of blunt force. Any middle schooler knows not to be a dick. Or a pussy.

But when Samantha Bee played the c-card earlier this week, she must have suspected it would go off like a bomb. In a barbed takedown on Wednesday's "Full Frontal," she mentioned Ivanka Trump and her notorious "second most oblivious tweet we've seen this week" — an ill-timed image of her with her son, posted in the midst of outcry over the separation of immigrant children from their parents. "You know, Ivanka, that's a beautiful photo of you and your child," Bee said. "But let me just say, one mother to another, do something about immigration practices, you feckless c**t."

For a split second, it was as if a hush fell over social media, just like when Ralphie blurts "Ohhhhhhh fuuuuuuuuuuudge" in "A Christmas Story." She said the word. The big one.

And then the inevitable outrage ensued. Cries of liberal hypocrisy and comparisons to Roseanne Barr's career immolating racist comments of earlier in the week abounded, because social media is a resoundingly nuance-free zone. Most pointedly, White House Press Secretary and occasional human Sarah Huckabee Sanders issued this chilling statement: "Her disgusting comments and show are not fit for broadcast, and executives at Time Warner and TBS must demonstrate that such explicit profanity about female members of this administration will not be condoned on its network."

Whatever you think of Samantha Bee's choice to call Ivanka a feckless version of the word (personally, I have no dog in that c**t), the current selective outrage over it is really something. In Michael Wolff's book "Fire and Fury," Ivanka's father is described as referring to former Deputy Attorney General Sally Yates as "such a c**t." In 2016, reporter Jennifer Lin asserted that he used "the worst word in the English language to refer to a woman" to chew her out several years earlier. Of course, the word did not go challenged when it repeatedly appeared on the signs and T-shirts of supporters during Trump's presidential campaign. Typical slogan: "She's A C**t, Vote For Trump." A month before the election and a year before getting an ABC reboot of her sitcom, Roseanne Barr tweeted, "Anyone who thinks Hillary isn't a c__t is a pussy." And Ted Nugent, who has called Hillary a "toxic c**t," has been welcomed at the White House. It seems the administration's comfort level with the word varies widely depending on who it's aimed at.

On Thursday, Bee issued an apology for the whole dustup. "It was inappropriate and inexcusable. I crossed a line, and I deeply regret it." Two of her show's sponsors have bowed out. But others have stood by Bee, pointing out that a vulgarity isn't equivalent to a longstanding pattern of racism. Sarah Silverman noted that the word is "Not quite as offensive as making it policy to separate children from their parents. Which I interpreted as your entire point." Minnie Driver trotted out a famous quip: "That was the wrong word for Samantha Bee to have used. But mostly because (to paraphrase the French) Ivanka has neither the warmth nor the depth." And Sally Field, of all people, declared that "I like Samantha Bee a lot, but she is flat wrong to call Ivanka a c**t. C**ts are powerful, beautiful, nurturing and honest."

For some, appreciation of the word is not a new thing. Anna Faris is a longtime fan, encouraging listeners on her "Unqualified" podcast to "Join the movement to own c**t as the British own it . . .  [to] bring the power back." Six years ago, writer Laurie Penny argued in New Statesman that "It's a perfectly nice little word, a word with 800 years of history; a word used by Chaucer and by Shakespeare. It's the only word we have to describe the female genitalia that is neither mawkish, nor medical, nor a function of pornography." Pussy Riot's merchandise includes a T-shirt with the word in Russian. And there's a whole famous segment of — appropriately — "The Vagina Monologues" that pays homage to it.

Yet for all earnest attempts to rebrand the word as something beautiful, for a great many of us, it's the nuclear option of vocabulary. In everyday conversation, I'm something of a one-woman David Mamet play myself, but there are only two women I've ever referred to by the c-word in my life — and neither to their faces. A friend and I have for several years described a truly devious backstabber in our circle exclusively as "That C**t," like her name is simply Thahkön or something. The other woman who goes by that moniker to me similarly earned it. You have got to be the actual worst, most aggressively and personally destructive woman I know for me use or approve the use of that word to describe you.

Here's a little known fact for you: Feminists can recognize that other members of our gender can be horrible human beings. Unfortunately and unfairly, though, I have nothing that even approaches a masculine equivalent.

The strength of the word no doubt comes from the sheer impact of the sound of it — the Strong Language blog has pointed out that its "phonetic structure, an explosive beginning, short vowel and abrupt ending, make c**t more likely to be offensive than its near synonyms." Sorry, twat.

And last year, a Very Bad Words podcast episode devoted to "The C Word" delved into why c**t has long resisted the kind of reclaiming that say, "queer" has. No wonder a classic episode of "30 Rock" devoted itself to Liz Lemon's rage and horror at being called "that horrible word."

When I want to be shocked, I can easily access a wealth of prompts — a great many emanating directly from 1600 Pennsylvania Avenue — on any given day. The decimation of our protected lands, the separation of families, the blatant, shameless greed at the expense of the struggling and the sick — that's what's horrific. The relentless attacks from the right on our autonomy over our body parts with taboo nicknames. But perhaps paradoxically, the extreme power of c**t on our sensitive American ears is what makes it somehow precious. I could bellow all the sexual and genital words you can think up from a megaphone in Times Square, and I know I'd get less attention than any random ratty Elmo. The c-word, on the other hand, is the fine wine I lovingly bring up from the cellar, the one I save for only (chef kiss) very, very special occasions. It has mystery and intense power. It scares people and it unsettles them. Just like the vagina itself. And I'm fine keeping it that way.

Why bad words are good

A podcast explores the purpose of vulgarity