Brian Eno's Oblique Strategies: the famous deck of cards behind "Another Green World"

The musicians would “humanize something free of error,” or "accept advice" – whatever the cards proclaimed 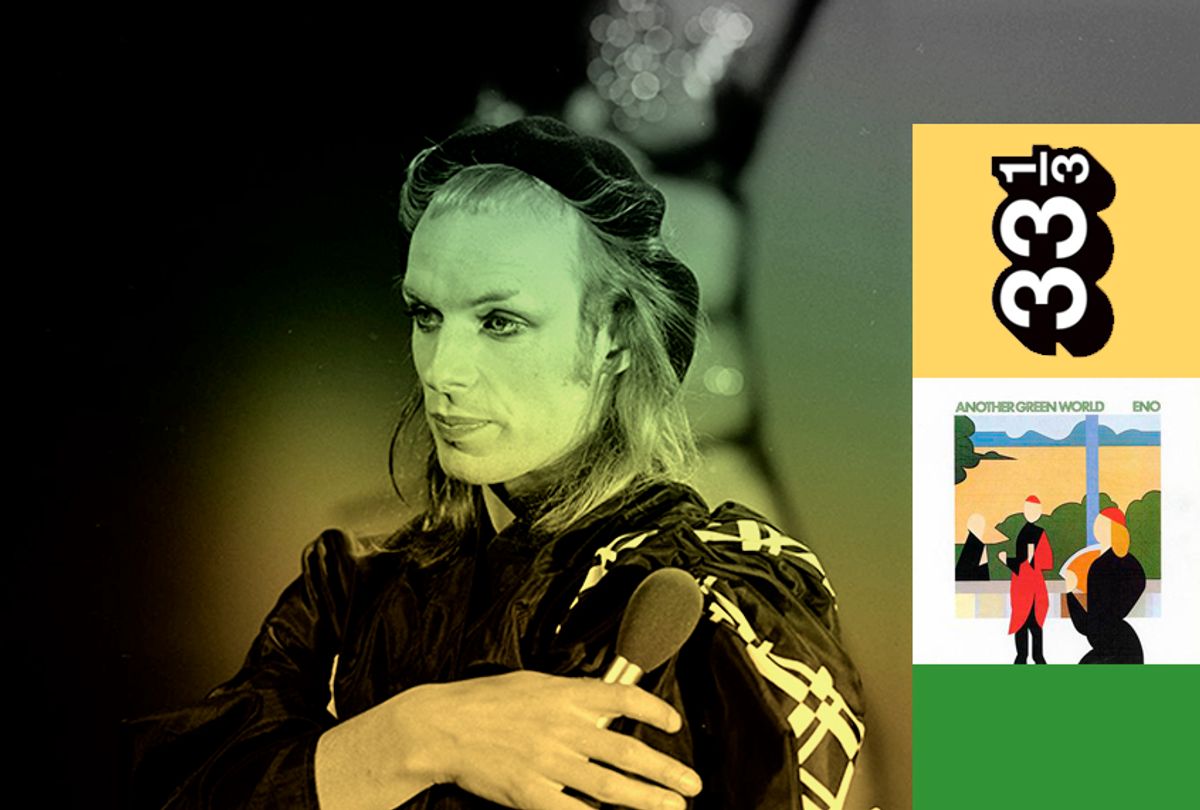 "Another Green World" is the first Eno record which credits “Brian Eno,” not the otherworldly, vaporous “Eno’’ he had been referred to on previous records. It’s also the first Eno album that gives an explicit credit to the Oblique Strategies cards on the back cover sleeve.

Eno and his artist friend Peter Schmidt released the Oblique Strategies cards in 1975, when they realized that they had both been independently developing sets of ideas to help themselves come up with creative solutions to trying situations. “The Oblique Strategies evolved from me being in a number of working situations when the panic of the situation—particularly in studios—tended to make me quickly forget that there were others ways of working, and that there were tangential ways of attacking problems that were in many senses more interesting than the direct head-on approach,” explained Eno in an interview with Charles Amirkhanian in 1980.

The most clear antecedent to the Oblique Strategies cards was John Cage’s adoption of the ancient Chinese divination system, the I Ching, to make musical decisions. Some other related concepts to the Oblique Strategies were the Fluxus movement’s fanciful and inventive “Fluxkits” and Fluxus boxes—one particularly inspired example of these boxes, by George Brecht, was called the “water yam” box. The boxes often contained cards with witty sayings or specific instructions.

Another possible predecessor to the Oblique Strategies cards was the media theorist Marshall McLuhan’s “Distant Early Warning” cards, issued in 1969. Some of McLuhan’s cards, which were printed on a regular deck of poker cards, had quotes from other thinkers (one card read “Propaganda is any culture in action”—Jacques Ellul); others had classic McLuhan quotes (the ten of diamonds read “The medium is the message”); a king card read “In the world of the blind, the one-eyed man is a hallucinated idiot’’; the nine of spades sported the ominous warning “With data banks we are taped, typed and scrubbed.”

Cage’s I Ching methodology was graceful and complex, and McLuhan’s Distant Early Warning cards bordered on plain goofy—almost like fortune-cookie fortunes from some bizarro media-studies universe. The Oblique Strategies cards, meanwhile, had a specific, utilitarian purpose. The quirky cards were designed to help artists and musicians get out of creative ruts and loosen up in the studio. Each Oblique Strategy had a different aphorism: “Accept advice,” read one. “Imagine the music as a series of disconnected events,” read another. “Humanize something free of error.”

Percy Jones had strong memories of the Oblique Strategies cards being shuffled and drawn during the recording sessions on various occasions. “The first time he did it, I thought we were going to have a game of poker or something,” Jones said, chuckling. “I had no idea what was going on.”

While the cards could be useful tools, the instructions on the cards were indeed followed to the letter—sometimes with potentially disastrous results. “If the cards foretold that something had to be erased or turned upside down, they were,” said Barry Sage. If a song was being worked on intensely, and a card that was drawn suddenly proclaimed that the tapes had to be deleted, they were.

Eno’s playfulness in the studio was key. “My quick guide to Captain Eno: play, instinct/intuition, good taste,” wrote Robert Fripp in an e-mail. “Eno demonstrated his intelligence by concentrating his interests away from live work; and his work persists, and continues to have influence. The key to Brian, from my view, is his sense of play. I only know one other person (a musician) who engages with play to the same extent as Brian. Although Eno is considered an intellectual, and clearly he has more than sufficient wit, it’s Brian’s instinctive and intuitive choices that impress me. Instinct puts us in the moment, intellect is slower.”

Eno is popularly characterized as a brainy studio boffin, an egghead theorist and solemn architect of “sonic landscapes”; meanwhile, his friends and collaborators describe him as lighthearted and fun to be around, with a relaxed, anything-goes attitude—both in the studio and in life. How to reconcile these two poles? Leo Abrahams, who worked with Eno on a number of recent recording projects, said that he’d observed Eno working on two different levels. “When I see him work on things that are on the more ambient levels of what he does—like the album "Neroli" or certain things that were on his last record, or the J. Peter Schwalm stuff—that’s when you’d almost see that reputation of the boffin, if you like, being justified, because there are certain things he knows how to do with instruments and effects that nobody else knows how to do,” Abrahams said. “It’s amazing watching him fashion that; I think that’s a lot closer to his visual work, which again is extremely painstaking. But then again, when I see him working on songs–more song-based records—he’s really hands-on, and not at all precious about sounds. He likes things to be distorted and he likes things to sound really rough, and he does lots of things that an engineer will say ‘That’s wrong, you can’t do that!’ He likes to sing with the speakers blaring out, so you hear the music in the background of all the vocal tracks and stuff, just because he doesn’t like using headphones. It’s a deceptively slapdash approach, if you know what I mean. It’s quite rock and roll, and it’s not what you’d expect from the person who made things like "Music for Airports" or "77 Million Paintings." A similar thing was said by Rhett Davies; he described to me a few of the situations of what it was like in the studio, and it just sounds like a huge amount of fun, basically, and very experimental and not so boffin-esque and not so painstaking.”

Eno mixed it up in the studio at around the time of "Another Green World" in other ways. “Sometimes you’d be into something really intense, you’d be working on a piece of music and discussing it, and then he’d say: ‘Anybody want some cake?’” said Percy Jones. “Eno would pull out a cake and he’d cut up slices of cake, and everyone would eat some cake, and then we’d forget all about the creative process!”