Freedom of speech can easily transform into the freedom to be pursued by the authorities, surveilled and detained 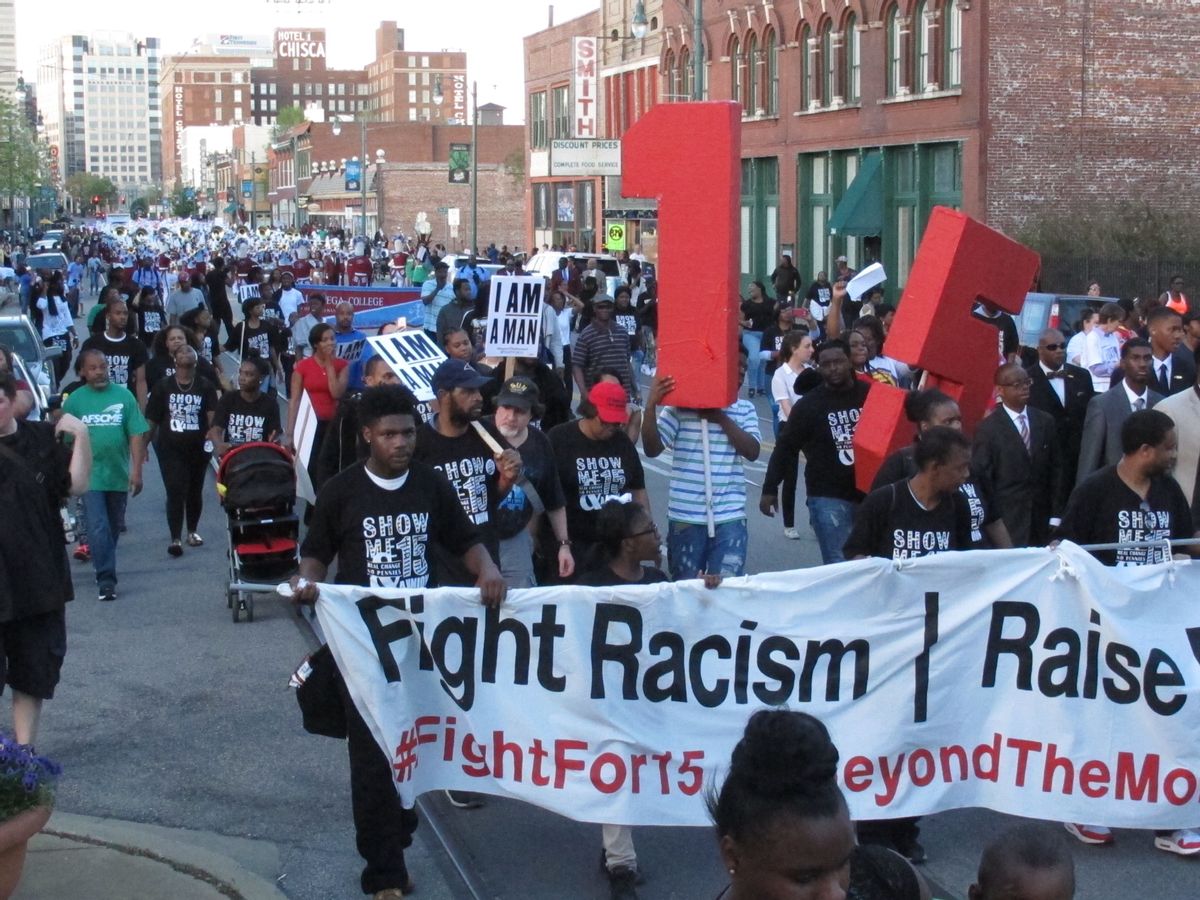 Words always matter, but they often matter more when the odds are already against you. The freedom to express oneself is supposed to be protectively enshrined in the First Amendment of the United States Constitution. However, for some people this ideal has always been slippery. The freedom to speak our minds can easily transform into the freedom to be pursued by the authorities, surveilled and detained. Depending on who the speaker is, our society dictates what speech is and isn't acceptable. No matter where you look on the political spectrum, you'll find people claiming to cherish freedom of speech and also claiming to be persecuted for their right to express it. Through time, we have seen how this ideal has been strategically levied against certain people in this society.

Recently, a Guardian exclusive on Rakem Balogun detailed how the Black activist is likely the first person targeted by federal authorities under the new designation of "Black Identity Extremist." Balogun was interviewed by the Guardian after being released from prison. He was imprisoned for five months and denied bail while US attorneys attempted to prosecute him for being a threat to the police as well as an illegal gun owner. Balogun's case was tried in part based on social media posts in which he criticized police. The Guardian noted, "When he was arrested, police confiscated his .38-caliber handgun and an unloaded AK-style assault rifle — and also, he said, took his book "Negroes with Guns" by the civil rights leader Robert F Williams."

The power of words seemingly shows up in two instances here. Balogun's willingness to challenge state power and undermine the police made him a target. The confiscation of Robert F. Williams's book from his possession, too, shows how the power of our words can transcend time and place. The authorities know this, and these cases are not making headlines out of pure chance. Examples are made of those who don't act accordingly, and history substantiates the claim that Black activists are doubly at risk because the judicial system is already working against them.

In the United States, the concept of "free speech" and the "right to bear arms" are thrown around very loosely. Despite their go-to nature as a defensive mechanism for people decrying the unfairness of the US government, race has everything to do with public perception.

The 2014 standoff between Cliven Bundy and federal law enforcement illustrates a distressing picture of just how blunt the difference can be. When a decades-long conflict between Cliven Bundy, his family and supporters grabbed national headlines, it was a deeply romanticized affair. Bundy became an inspiration for right-wing militias who anticipate having to prove themselves to the federal government. Bundy's standoff escalated to the point that in 2016, armed men led by Ammon and Ryan Bundy seized control of the headquarters at the Malheur National Wildlife Refuge near Burns, Oregon. Their occupation lasted for over 40 days and the media looked on patiently, compassionately and forgivingly.

Cliven Bundy is no stranger to bigoted, white supremacist views. He once stated that Black Americans, who he referred to as "negroes," were possibly "better off as slaves." Still, many found favor and reason with his cause because anti-Blackness is normally defended under the auspices of free speech. The Bundy family and their supporters were regularly made into heroes, reminiscent of Western settler expansion, a normally cherished form of violence in US popular culture like movies and video games. When PBS's Frontline covered the fiasco, the documentary episode was titled, "American Patriot." The New York Times went so far as to fondly announce recently, "Newly Freed, Cliven Bundy Gets a Hero's Welcome in the Rugged West." The list goes on, but a deviation away from empathy in the white mainstream consciousness for the likes of Bundy falls short.

The story has been very different for Black activists historically. Many of the most well-known movement leaders were surveilled and persecuted for daring to challenge state-sponsored white supremacy in the form of anti-Black governance. Historically, the monitoring of Black dissidents within the US extends well over the last century. Infamous programs like the FBI's COINTELPRO — which surveilled, brutalized and repressed Black activists — aren't necessarily things of the past when we look at the current state of surveillance and repression. Black activists who have advocated for their right to free speech and claimed the right to bear arms have been especially vulnerable to state violence. There seems to be a dangerous threat in the realization that not only can one fight with weapons, but one can also fight with words.

During the tumultuous Trump rallies leading up to his election, there were Black people targeted for protesting at his election events. So, it's no surprise that the likes of "Black identity extremism" has been exposed as a concern of this administration. In practice, even before Donald Trump was elected, violence against Black protesters at his rallies was never surprising. One person who was attacked for expressing his free speech and right to bear arms is Mercutio Southall. AL.com reported Southall "suffered a concussion after the Nov. 21 incident at the Birmingham-Jefferson Convention Complex," where he went to protest a Trump rally. Southall was both physically and verbally attacked by attendees and then-candidate Trump, who said at the time, "Maybe he should have been roughed up because it was absolutely disgusting what he was doing." What could be described as freedom of speech and the right to protest was instead framed as an offense punishable by white mob violence.

Truthout attempted to contact Southall but was unable to make contact. However, Southall's lawyer, Richard A. Rice, offered comment. When asked about why Black activists seem to take higher priority when it comes to suppression of free speech, Rice told Truthout, "It's a continuation of COINTELPRO and some of the other things that we've seen out of the FBI and the CIA to basically suppress any type of Black political organizing and/or any type of protest." Rice added that moments like the present are moments of transformation and encouraged activists to "think about it in a strategic way" because it can be a "catapult to move us forward."

Lawyer David Gespass, former president of the National Lawyers Guild, also spoke with Truthout regarding the issues of persecuted free speech. In 2010, Gespass defended US Army Spec. Marc Hall who was facing an imminent court-martial for challenging the US military's stop-loss policy in a rap song. Hall was jailed in 2009 for making a song about the frustration of being forced to remain in the military beyond his designated contract by the stop-loss policy. His case made headlines because it became an issue of free speech. Almost 10 years after that case, Gespass noted how repetitive it all is.

"The FBI has this long history of being an instrument of political repression . . . a lot of that is still in the DNA of the agency," he told Truthout. He also mentioned that the Justice Department headed by Jeff Sessions would fully reflect the racism of Sessions himself. "It's just there," he said, explaining that the Justice Department holds the "ideology that those who threaten the established order need to be watched and controlled."

When asked about what activists should do to be cautious about being surveilled for repressive reasons, Gespass said, "First of all be very, very careful of social media. While it's very useful for organizing . . . what you say on social media can be twisted." He went on "Never ever talk to law enforcement . . . certainly not without consulting with a lawyer first. You just never talk to them. Do not let them into your home unless they have a warrant. Innocence does not protect you."

With the recent Cambridge Analytica revelations about how social media can be manipulated to influence elections, it's known that state forces are manipulating our networks just the same. The monitoring of social media has even led to what we could argue is entrapment at the behest of officials seeking to detain those in whom they take interest. The frustration of the political moment makes activists especially susceptible to being targeted because emotion can easily get the best of any of us. However, a brief lapse in judgment or a careless outburst can turn into a lengthy sentence of regret when the state sees an opportunity and takes it.

The cases we see now and the cases of the past are connected. The agenda that we know works in the interest of protecting the establishment happens nonstop. It's discriminatory and violent for the purposes of maintaining state power. This observation tells us to watch our words for the sake of ourselves and our communities. The inadvertent risk of believing that the law is equally applied puts us in a precarious position. Until we exist in a society where there's some sort of equality to rely on, all of our words are potentially fighting words; we have to make sure that we're prepared for the battles that come with that.