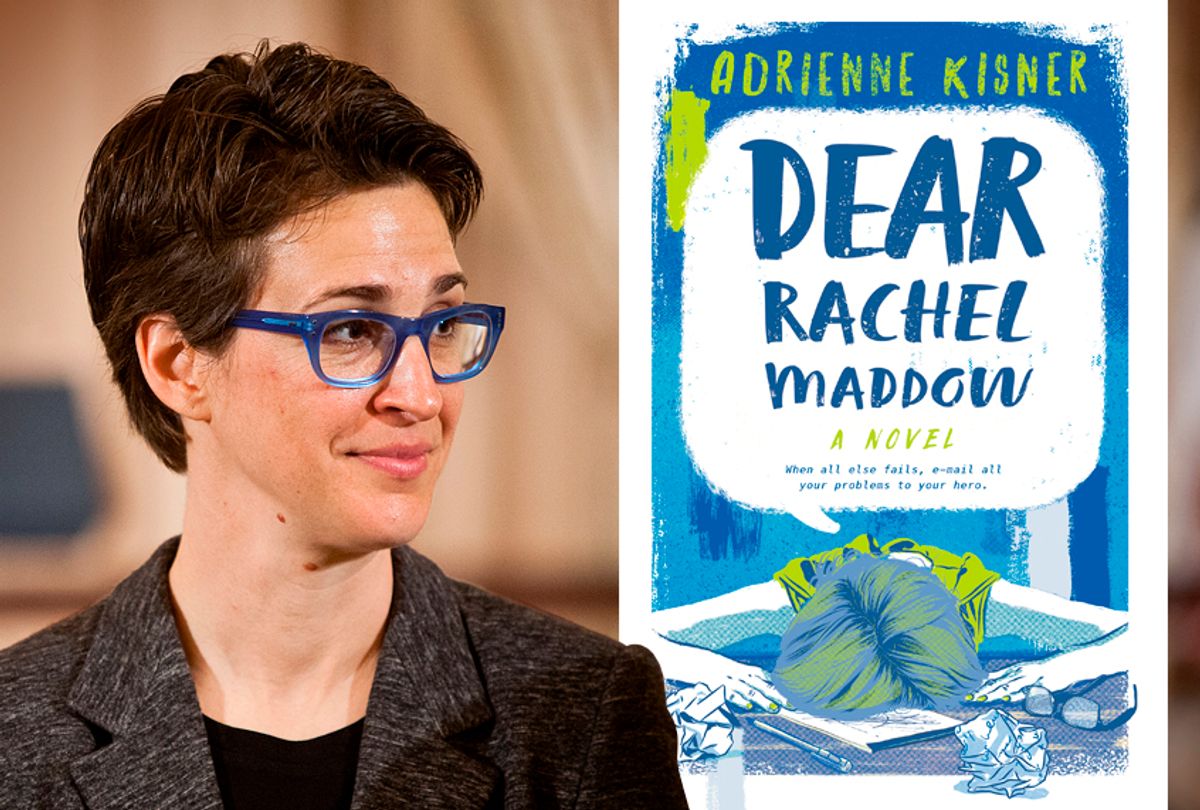 High school can be hell. It's certainly a torrent of problems for Brynn Harper, the heroine of author Adrienne Kisner's sad, funny, wise — and already widely acclaimed — debut young adult novel. Facing grief, academic challenges, a troubled home life and the rejection of her first girlfriend, a class assignment becomes a lifeline and a television icon turns into an unlikely beacon of hope.

I loved your book. It also gave me many feelings and I cried a lot, so thanks.

I've read that you started the idea for this 10 years ago when you had your first baby. You thought that someone should write "A Dear Mr. Henshaw" but for Rachel Maddow. The world has changed a lot in the past decade, Adrienne. I'm curious how you've evolved this book that you've spent so long with, and how it changed while you've been watching the world change.

I religiously watched Rachel Maddow. It debuted when my daughter debuted. It seemed to always be on. My daughter just never slept; she liked to scream. But she was calmed by bouncing on a yoga ball. That's it, that's the only thing that would work. We used to have really good cable — I live in a college campus so we had this amazing cable. I would always watch "Women Behind Bars," because that was reliably on between 12:00 and 4:00 am. Then our cable changed and I was devastated because we lost the WE Network, and so really only infomercials were on and I didn't really have the mental capacity to focus on anything.

When Rachel's show came on, I feel like they replayed it. My memory is a little murky, so this all might be hallucination. It was always new, even though it replayed, because I had no short term memory at that point. She was just so soothing and friendly, like, “All right little baby, we will watch this woman. Look, look at how successful she is!” As the show went on, it was different than it is now. Now very rarely is there a "best new thing in the world." These little quirks of the show, I basically had to take out because they're a remnant of a simpler time.

There was a time when there was an owl — the owl still might be there in Oregon — who would swoop down and like try to get people, and her staff designed a sign warning people about this swooping owl. There's just nothing like that anymore. Now it's Russia, Russia, Russia, collusion, here's this crazy thing that happened in news. It's a different experience watching the show. She still goes back, and she still explains the news from history, but it's much more breaking news. Before, it had a laid-back feel, and now it's, "Well, this is our reality. I want to tell you about it because it's a big deal."

Exactly. Even early on she'd be like, "It was a big day in the news" and I'd always say, "You say that every day." But now you can tell because there's no filler. They don't have these little things that would fill the time because there's just no time to fill.

Putting this in the context of our ridiculous current news cycle, this is also a book that feels in many ways really a timeless coming of age story. I know that "Dear Mr. Henshaw" was the template that you moved from this epistolary tale. Someone going into it seeing Rachel Maddow's name on the cover might not know what they're getting into is really about this girl. It's her story and about her imaginary sounding board for her thoughts and feelings during this year-long period in her life.

I think the books for me come from the character. Initially, one of the earliest drafts of this book was really a rip-off of "Dear Mr. Henshaw." I was going to fictionalize Rachel Maddow, but in my mind I'm like, "You know what? No one's ever going to read this. I'll do whatever I want. Who cares?” Then it got out of hand. I’m like, "Oh well, I just wrote a book to Rachel Maddow. It's out there in the world and it's separate from the reality of her."

Brynn, the character, was inspired randomly by Twitter. Someone had tweeted that a lot of YA books have people who aspire to go to Juilliard and Harvard and do these grand things. Often at the end of the story, they succeed. Where are the books for people who really aren't on that kind of path, who aren't aspiring to this? I thought, "You're right, that's a thing, I should write that book." You know, you don't have to be a genius to be a thinking, feeling person.

Brynn is very smart, in my experience. It's interesting to see readers interpret her because she struggles academically. Some reviewers have said that she has dyslexia, and that might be true. My experience in learning challenges has always been in the "not otherwise specified" realm, where there are clear challenges, but there's this diagnostic criteria that you don't fall into. You're in this murky realm, and that's where I envisioned Brynn. She's getting the help at school but she's not necessarily on this path towards academic greatness. That isn't what she really wants.

In terms of all my characters, they tend to lose. That is where I feel in my comfort zone. You want all these great things and you're probably not going to get them. But I went to a wonderful MFA program and there they drill into your head that you have to figure out what your character really wants. I do hope that my people in the book figure out what they want and maybe get it.

For a great majority of us, as we're looking around and comparing ourselves to everybody around us, sometimes it's just about being able to survive. Brynn survives and her brother did not. A big part of her triumph is that she is able to get her education, she is able to learn, she is able to grow. She is able to do all these other things. Life's not just about those kind of things that you can tick off in a box that are the metrics of success.

She struggles with deserving to make it. There are people who will make it regardless of what they do, and they just have the deck stacked in their favor. But something intrinsic to her character is she can't stop herself from caring. She desperately wants to stop, but she just can't. What compels her to do most of the stuff that she does is the spark within her that really should have been extinguished but just can't, because that's who she is.

She connects with readers because she is a person who, despite the evidence of her life, has hope.

There are all these compelling reasons to not to. I wouldn't blame her if she did. In writing the book, earlier she had few allies. I couldn't figure out what wasn't working. Why would she bother caring? There's nothing going right. That's where her crew evolved. Then she did have people rooting for her, which is important as well. Her found family really made it for her, I think, in the end. You do need people, even if it's not the people that you want or expect to be in your corner. Having people in your corner makes all the difference.

I did not go into it with any of that. All I wanted to do was, "Hey, there's this chick who writes to Rachel Maddow!"

The only thing that I really remind myself in writing is that I usually write about teenagers. They aren't going to make the best choices all the time. I am inclined to make them pretty happy and maybe they go out to dinner and then they're in love and it's great. And then I have to go back and fix it. I don't want to do bad things to people. But then, when you let your characters be who they are, they aren't going to make these choices. Who Brynn is and how she got where she is, is because of all this stuff. It just emerged. At times I was reading over like, "Wow, poor Brynn. I just want to give you a hug."

This is important because this is not fanciful. This is not too much, this is not over the top. This is very much a book about issues that kids are facing. It's really important to identify that kids don't just get one issue. It's not just, "Oh, I'm the gay teen and I'm the kid with the learning issue and I'm the kid who's grieving for a family member." Sometimes you're all of those things. I also really love teenagers and I think they're the most interesting human beings.

The past several months, we've watched this rising generation of activists, this generation of kids who are different. They are responding to the world in a different way and they are looking at these issues, not just about violence and gun control, but gender, harassment, online bullying, sexuality, in a different context. They have different frames of reference than people who are even 10 years older than they are. I'm wondering how you write to that and how you write to a voice of a generation that is unique.

These kids have to deal with the reality that if they go to school, they might get shot. It's real and it's heightened. It's closer now, because there's more information to be had and it's very, very accessible. And you can wield it with little oversight.

I went into this thinking, I exist now and I existed as a teen at one point — what would I have wanted to hear then? Who would I want to read about? What would I have wanted to hear encourage me in this crazy world? Because though it is different, there's always war, there's always mean people. They find new ways to come at you and to use the tools available to them. It's more about writing authentic characters who try to navigate whatever is thrown at them. Maybe they come out on top, maybe they don't, but what do you do with that? I would hope that's the kind of writing I'm crafting. And if that connects with this generation of involved, passionate, amazing kids, then I am humbled that I was able to do that.

Why adults love YA

The trials of teens have a timeless resonance