"They disagree with their president, because he insists that they proudly stand" for the anthem, Trump claims 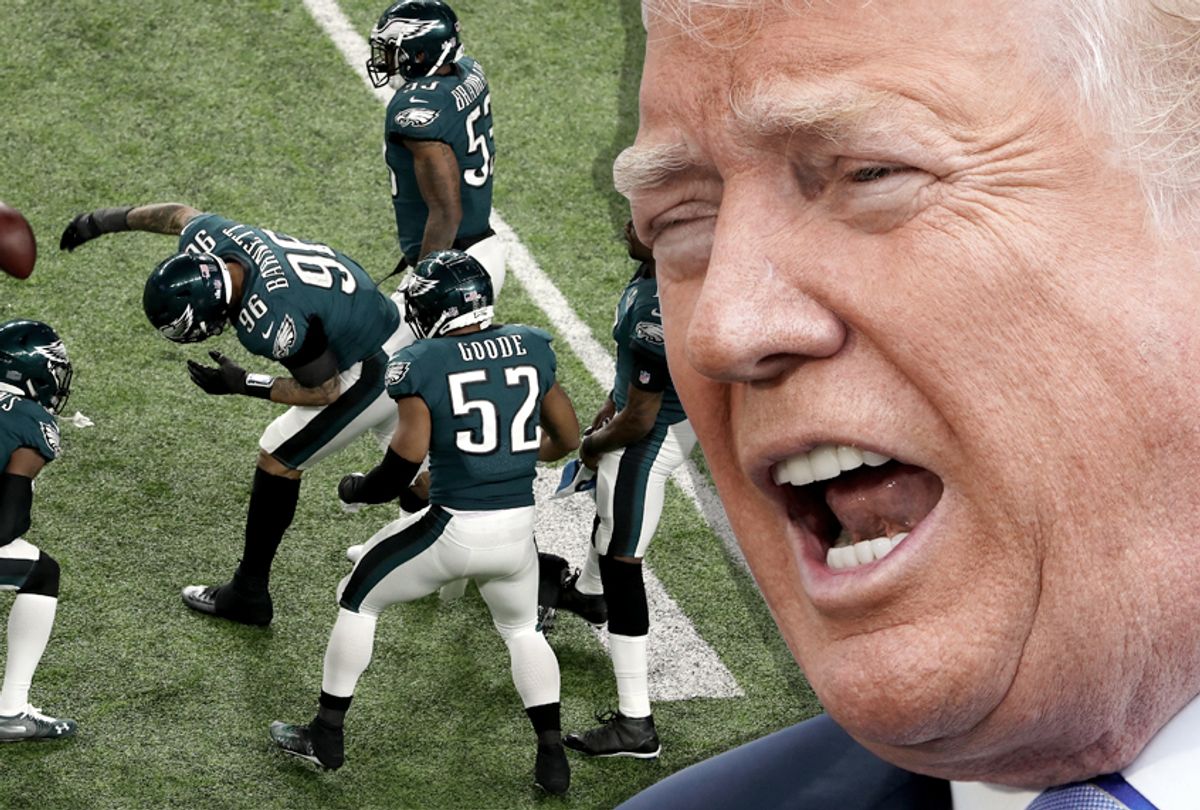 "If this wasn't a political stunt by the Eagles franchise, then they wouldn’t have committed to attend the event and then backed out," Sanders said.

Earlier Tuesday, the White House issued a statement about the controversy.

"Unfortunately, the Eagles offered to send only a tiny handful of representatives, while making clear that the great majority of players would not attend the event, despite planning to be in D.C. today," the statement read. "In other words, the vast majority of the Eagles team decided to abandon their fans."

The White House noted that Trump "decided to change the event so that it would be a celebration of the American flag with Eagles fans."

"The Philadelphia Eagles are unable to come to the White House with their full team to be celebrated tomorrow," Trump said in the statement. "They disagree with their president, because he insists that they proudly stand for the National Anthem, hand on heart, in honor of the great men and women of our military and the people of our country. The Eagles wanted to send a smaller delegation, but the 1,000 fans planning to attend the event deserve better."

The president said that the fans are still welcome at the White House on Tuesday, but for a "different kind of ceremony" meant to "honor our great country, pay tribute to the heroes who fight it, and loudly and proudly play the National Anthem."

Trump later clarified that the celebration was canceled after "only a small number of players decided to come." White House officials told The New York Times that fewer than 10 members of the team planned to attend the Tuesday event.

Presidents traditionally invite the champions of major professional and college sports events to the White House to make a stop on their victory lap, but this isn't the first time Trump has buffed tradition. After Golden State Warriors star Stephen Curry said he did not want to visit the White House, Trump tweeted that his invitation had been "withdrawn."

Several Eagles players, including safety Malcolm Jenkins and defensive end Chris Long, had announced they would skip the ceremony due to the repeated attacks and criticism by the president directed at players who had knelt on football fields across the country during the national anthem in protest of policy brutality and racial injustice. Other players had remained unsure of their participation, and Eagles officials left the decision up to the players.

Some NFL players even took to social media to respond to the president's decision to rescind an invitation to the Super Bowl champions. Former Eagles wide receiver Torrey Smith, who played for the team during the Super Bowl, wanted to set the record straight about the so-called "lies" and "false narrative" coming from the Trump White House.

"The men and women that wanted to go should’ve been able to go," tweeted Smith. "It’s a cowardly act to cancel the celebration because the majority of the people don’t want to see you. To make it about the anthem is foolish."

Sen. Bob Casey, D-Pa., said he, too, would not attend the ceremony after Trump's announcement. The senator tweeted that he was proud of his home team, as he lambasted the White House's "political stunt." Casey presented the Eagles with an alternative invitation: Visit Capitol Hill instead.

Last month, the NFL enacted a new policy that allows players to remain in the locker room during pregame ceremonies, including the national Aanthem, but requires those who walk on the field to remain standing. Teams could be fined if any players on the field sit or kneel during the national anthem, as countless did last season.

"It was unfortunate that on-field protests created a false perception among many that thousands of NFL players were unpatriotic," said NFL Commissioner Roger Goodell in a statement following the league's policy announcement last month. "This is not and was never the case. This season, all league and team personnel shall stand and show respect for the flag and the anthem."

Trump praised the NFL's effort during an appearance on "Fox & Friends," but he also suggested those who participated in the protests by kneeling should not even be allowed in the U.S.

Eagles players, including Long, criticized the league's new policy, who said it was "not patriotism."

"This is fear of a diminished bottom line. It’s also fear of the president turning his base against a corporation," the defensive end wrote on Twitter at the time. "This is not patriotism. Don't get it confused."

The president has fiercely condemned the protests and encouraged fans to boycott the NFL. Speaking a political rally in Huntsville, Alabama, in September, Trump said, "Wouldn't you love to see one of these NFL owners, when somebody disrespects our flag, to say, 'Get that son of a b*tch off the field right now, he's fired!?'"