Bill Clinton's Lewinsky fail is a symptom of something bigger: Democrats' lack of integrity 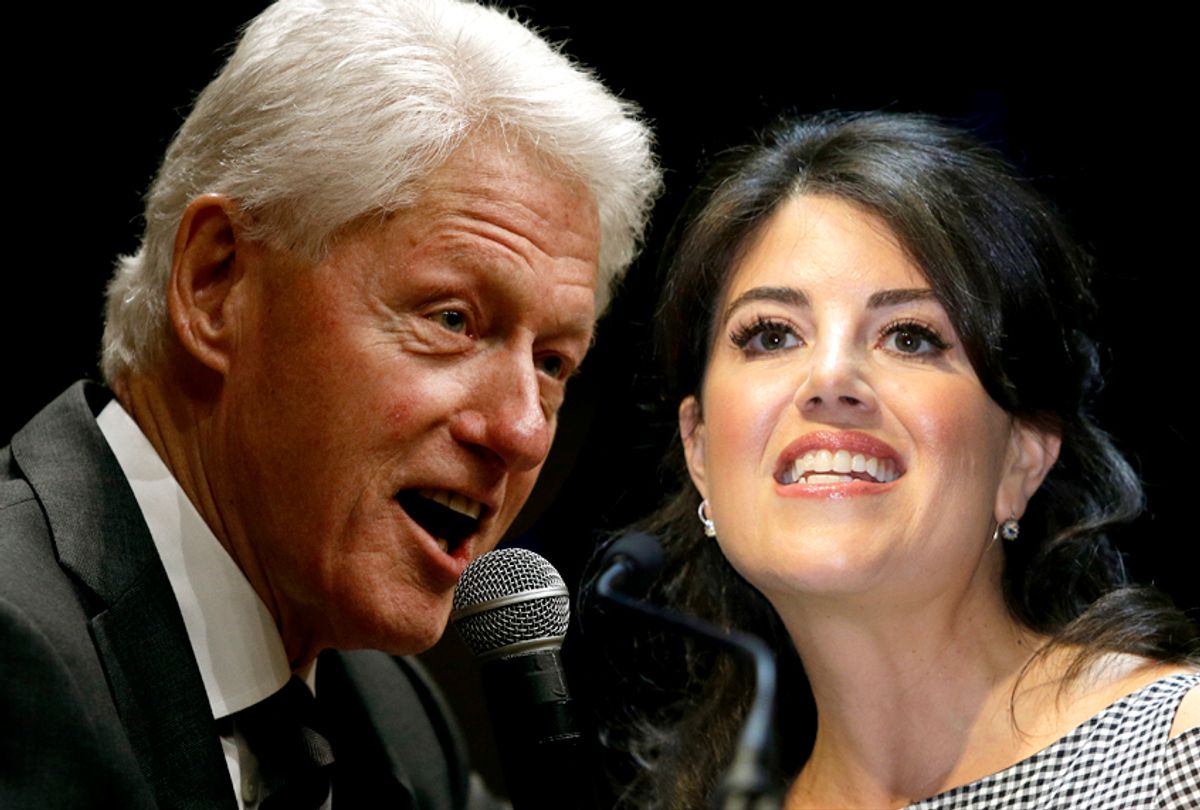 In the wake of Bill Clinton’s refusal to take responsibility for Monica Lewinsky’s #MeToo experience with him, a number of articles have suggested that he paved the way for Donald Trump. The logic is fairly clear: If Bill Clinton isn’t responsible for what he did to Monica Lewinsky or any of the various women who have accused him of sexual assault, then how exactly do we blame Trump for his own version of the same types of behavior?

It isn’t just the pattern match on how these men treated women; it is also the fact that they have used similar tactics to deflect responsibility for their actions. When Lewinsky was mentioned during Bill Clinton’s recent interview with NBC’s "Today," he was immediately irritated and dismissive. "Do you think President Kennedy should have resigned?" Clinton asked the interviewer. "Do you think President Johnson should have resigned?"

The unspoken question that hung in the air was, “Do you think President Trump should resign?” Because by Clinton’s logic, if he isn’t to be judged for what he did, since others did it before him, then why should Trump? Clinton also suggested that the news was biased and had not reported all the relevant facts – a move we see Trump do every day. Clinton then cast himself as a victim who had had to pay millions in legal fees. Sound familiar?

But it gets worse. Because this is not just a story about a president who was lecherous, predating a current president who is lecherous. This is a story about the Democrats’ culture of impunity — one where they assert the moral high ground as they go after Trump while also claiming that they have no accountability whatsoever for their own ethical failings. This twisted logic has created a real ethical quagmire.

The harsh reality is that Bill and Hillary Clinton, along with the leadership of the Democratic National Committee, have long engaged in moral double-speak, where they are quick to blame their opponents for a lack of integrity but unwilling to practice integrity themselves.

Think about it. The Bill Clinton story simply reminds us of how he too was a disgrace to the office of the president, not only in the way he treated women but also in his unethical behavior. This isn’t just about sex and lies; it is about sex, lies and corruption.

The examples of the ways the Clintons engaged in unethical business dealings abound. Remember that they suggested that it was completely normal for entities related to the secretary of state to engage in fundraising from countries with foreign-policy interests before the United States.

As Josh Barro explained in Business Insider, “Years before Trump started taking policy advice from friends at Mar-a-Lago, Hillary Clinton was forwarding freelance intelligence memos about Libya from Clinton Foundation consultant Sidney Blumenthal around the State Department as Blumenthal pursued business interests in Libya with other Clinton associates.” He also points out that well before Jared Kushner was making private business deals while serving as a top White House adviser, Hillary Clinton's longtime aide Huma Abedin was doing it.

And there is clearly no better example of a lack of integrity than a presidential candidate who accepts huge speaking fees from Wall Street firms and then tells the public that they shouldn’t worry that her ties to Wall Street might limit her ability to defend the public interest. When questioned about these activities by her opponent, Bernie Sanders, Clinton accused him of sexism. Later, he was one of the many culprits she blamed for losing the election. At no time did it seem to occur to Clinton that maybe voters didn’t trust someone who would take that sort of money from Wall Street firms.

As if all this weren’t enough, we now know that the DNC was biased towards Hillary Clinton in the 2016 race. Former interim DNC chair Donna Brazile, who was herself fired from CNN for passing debate questions to the Clinton camp during the primaries, later admitted that Clinton had controlled DNC funds that should have been for the party nominee. And don’t forget that after Rep. Debbie Wasserman Schultz was forced to step down as DNC chair in the wake of the enormous email leaks, Hillary Clinton immediately hired her for her campaign.

When Sanders supporters filed a class action lawsuit alleging that the DNC and Schultz had violated the DNC charter by rigging the primary system in Clinton's favor, the suit was dropped. Not because the argument was without merit, but because the court found that it was essentially OK for the party to rig its primary process however it wished.

That’s right. The suit wasn’t dropped because there was no bias; it was dropped because the DNC argued that they had no real obligation to treat the candidates in an impartial fashion. As the court document puts it, the DNC charter’s promise of “impartiality and evenhandedness” is effectively meaningless — “political rhetoric that is not enforceable in federal courts.”

It really isn’t possible in the short space here to list all the ways the DNC oligarchy has lost the trust of Democratic voters or the public in general. There are simply too many examples of corruption, cronyism, financial scandals, sexual misconduct and more to detail here.

Perhaps even more disturbingly, the cadre of DNC party insiders has not only refused to own up to what they did but have shamed anyone who called them out and have continued to demand blind loyalty from supporters. “Democrats, believing that it was necessary to defend the Clintons at all costs, not only excused their extensive financial conflicts of interests,” argues Barro, “but insisted that people who found them to be lacking in the ethics department did not understand that this is how politics works, and has always worked.”

These arguments, as Will Rahn explains, put Hillary Clinton in a weird spot as she tried to run as an ethical counter to Trump. He argues that the “Democrats realized too late that Hillary Clinton was not the best person they had to make the moralistic case against him.”

The point is this: If what the Clintons and DNC insiders did was just politics as usual, that makes it difficult to claim that the more brazen and extreme version we see in the Trump administration must be opposed on moral grounds.

It may be tempting to argue that Trump is vastly worse than both the Clintons and the DNC put together. But this is not a competition to determine which camp is more morally bankrupt.

Another tack, as Rahn put it, is to wonder why Bill Clinton can’t just go away? But his disappearance wouldn’t help. He is only one small part of the story.

The only fix to the way that our political process has normalized oligarchy, cronyism, scandal and impunity across both major parties is for those of us who are sick of it to call it out and demand better. As we head into the next cycle of elections, our nation may be less divided between blue and red than between those of us who demand integrity from our politicians and those of us who no longer care.

The mistakes that doomed Hillary Clinton

"Shattered" co-author Amie Parnes says Clinton was a "mismatched candidate" in a year of change.