Crisis of faith: Evangelical Christians struggle with their own #MeToo moment 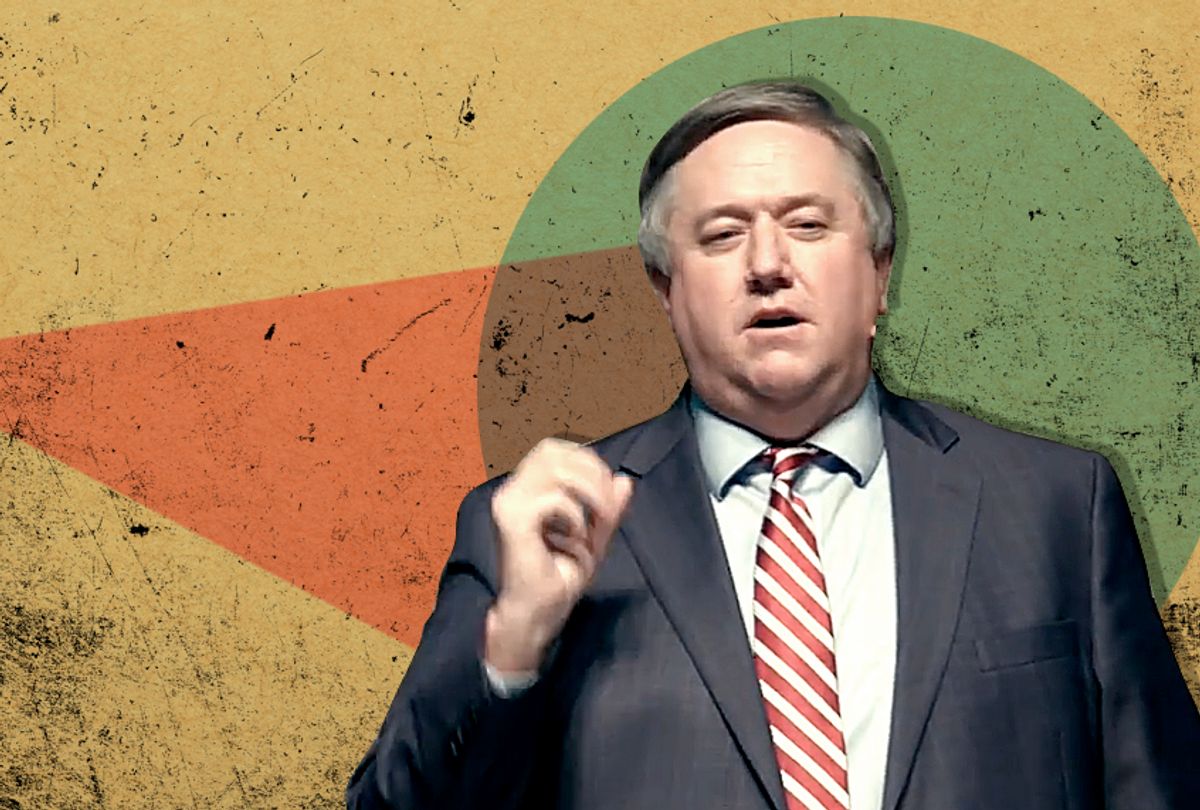 After watching wealthy, powerful men like Bill Cosby and Harvey Weinstein face very serious, criminal justice-level consequences in the wake of the #MeToo movement, there is reason for people to believe that real change is possible when it comes to ending the silence around sexual abuse and harassment. But many who want to end abusive environments in the evangelical Christian world are concerned that their leaders are far too invested in the status quo to allow the reforms necessary to make their world safer and more respectful of women's well-being.

The latest example comes from a controversy swirling around Columbia International University, a Christian-identified school in Columbia, South Carolina. Like many of the slow-rolling stories of the #MeToo era, it's a complicated story with a massive cast of characters, but here's a brief summary: Early in May, the public learned that a former lawyer for Ohio Christian University, Jeremy Davitz, is suing the school's former president, Mark Smith, who is now president of Columbia International. Davitz alleges that Smith retaliated against Davitz for investigating sexual and racial harassment complaints against Smith's son, Doug Smith, who worked in IT at Ohio Christian.

In his lawsuit, Davitz and his attorneys allege that female employees at Ohio Christian reported Doug Smith sticking his finger in a woman's mouth and calling it a "slut test," sexually pestering a woman repeatedly, photographing a woman's behind and putting the image online and routinely saying racist things about Jews, Mexicans and black people. Davitz says that when he tried to take action, Mark Smith "lashed out" and eventually fired him.

Columbia International is standing by Mark Smith, who denies the allegations. After the story about the Davitz lawsuit came out, The State, the Columbia daily newspaper, published stories from alumni of the school, who argued that the university had an abusive environment. One former student claimed sexual assault by a faculty member. The other allegations, including several against former president Bill Jones, are less severe. Alumni claim that Jones would pet people's hair or tickle them without permission, which they considered inappropriate.

When Salon reached out to Columbia International University, the school's attorney, Reginald Belcher, indicated that it had hired a lawyer named Amy Gaffney to investigate the allegations about Jones and other events prior to the hiring of Smith, but not to look into Smith himself.

"Dr. Smith has denied the allegations and vigorously is defending the other case," Belcher wrote in a statement emailed to Salon. "CIU fully supports Dr. Smith."

When asked whether Doug Smith was employed at the university, as reported by the Greenville News, Belcher did not respond.

Former students and other concerned individuals who have a relationship to the world of evangelical Christian education are now speaking out. Michelle Panchuk, an alumnus of Columbia International who is now an assistant professor at Murray State University, started a petition calling on her former school to hire an organization called GRACE (Godly Response to Abuse in a Christian Environment) for an independent investigation of "past and present practices in responding to disclosures of spiritual, sexual, and racial harassment, abuse, and assault."

“My initial response to the allegations against Doug and Mark Smith was to hope the school would respond in a way that shows they took the allegations seriously," Panchuk told Salon, noting that GRACE has "evangelical commitments and credentials" that should ensure that both those who report alleged abuses and people loyal to the school find it trustworthy. In contrast, she worried that a CIU lawyer would mainly work to protect the school or at least would be perceived that way.

When Salon reached out to Boz Tchividjian, a former prosecutor who founded GRACE in 2003 to help churches and other religious organizations battle sexual abuse, he said he hasn't "paid a lot of attention" to the specifics of the Columbia International case.

"I’m always concerned if an institution hires a law firm to conduct an investigation," he said. However well-intentioned lawyers might be, he said, they still have "a fiduciary duty to their client, which means ultimately the client is in control."

Tchividjian said GRACE tries to offer truly independent investigations, which is not always easy for them when it comes to dealing with clients.

"We have conducted investigations where, in my opinion, the institution wasn’t [ready] yet," he explained, noting that many organizations in the evangelical Christian world only begin investigations "because they’re fearful a newspaper is going to write a story about them or if there’s already a big story and the whole world’s watching them." The danger there, he added, is that "as soon as that public spotlight dims," the organization starts trying to exert control.

“Ultimately it’s about protecting themselves," he said, rather than "an authentic, genuine concern about what happened.”

Both Panchuk and Tchividjian, however, were adamant that religious institutions should be worried about more than the immediate damage to their reputations when allegations of sexual harassment or abuse are made.

"I consider myself a Christian, although I no longer consider myself an evangelical," Panchuk said. "One of my commitments is that I think any religious space should be a space that is safe for the most vulnerable members of the community."

Tchividjian said that when he is dealing with an organization facing such problems, he tells them, "If you are who you say you are, you will have to accept the fact that this organization doesn’t belong to you. It belongs to God," and that such knowledge "should liberate you to be as transparent as possible, and be vulnerable as an organization."

Sexual harassment is painful under the best of circumstances, explained Panchuk, who has researched religious trauma as a philosophy professor. But when it happens "in a religious context," she continued, "there’s this added religious valence that can have a pretty serious impact on the person’s ability to engage with their religious faith in the future."

Tchividjian concurred, saying, "I’ve met a lot of survivors of abuse, especially within the faith communities, who still have this desire to know and have some type of relationship with God, but they just can’t."

He added that religious leaders often don't know how to respond to this. Instead of confronting the issue directly, "what they do is throw out platitudes" about how God knows everything and God plans for everything, he said, which is "just aggravating an already existing injury."

Columbia International University is just one of a series of high-profile cases where leaders in evangelical education have been heavily criticized, often by members of their own faith community, for what is seen as sexist, abusive or demeaning behavior.

Last month, Paige Patterson, the head of the Southwestern Baptist Theological Seminary, was fired from his position after thousands of Southern Baptist women demanded his ouster in a letter. Critics accused Patterson of covering up two rape allegations at the school and said he had made a series of degrading comments about women, including suggesting that abused women were obliged to stay with their husbands.

On June 1, the school's board of trustees released a statement that positioned the alleged rape cover-ups as the main reason for the firing. The board said that in a 2015 case, Patterson "sent an email (the contents of which were shared with the Board on May 22) to the Chief of Campus Security in which Dr. Patterson discussed meeting with the student alone so that he could 'break her down' and that he preferred no officials be present."

In 2013, GRACE was hired to do an independent investigation at Bob Jones University, a prominent evangelical institution in Greenville, South Carolina. The highly publicized report released in December 2014 found that the university had a "blaming and disparaging" attitude towards victims and had discouraged the reporting of abuse or harassment. One alleged victim was reportedly accused of having the "sin of bitterness."

Unfortunately, Bob Jones University, which tried at one point during the investigation to fire GRACE, responded in a way that former students who say they have survived sexual abuse found offensive and distressing. GRACE had counseled the school to abandon the "biblical counseling" that often blames the victim for her trauma in favor of more proven, healing-focused methods. The school's president responded by saying, "God's inerrant and authoritative word is completely sufficient to address any problem believers face in their spiritual life."

While disappointed in the response, Tchividjian still says he's glad his organization did the report, saying that it was in many cases the first time that someone had "listened to victims of abuse, affirmed what they’ve shared with us, didn’t sit there and preach at them or open our Bible and point to verses where they need to be reading and retraumatize them."

Ultimately, however, what the Bob Jones case demonstrated is that Tchividjian is justified in his reluctance to work with organizations that aren't fully on board with pursuing an independent investigation. As the country as a whole learned when Donald Trump was elected president, despite being recorded bragging about kissing and grabbing women without their consent, exposing sexual misconduct often isn't enough. People have to want to do something to fix the situation and hold bad actors accountable.

What happens next for Columbia International remains to be seen. At publication time, Panchuk's petition had more than 700 signatures, a substantial number for a relatively small school. (CIU has only 1,250 students in all.) Pressure is also mounting on social media, as people connected to both the Columbia International and Ohio Christian communities are speaking out, largely on Facebook.

Still, the school's current posture appears largely defensive. On the alumni page on Facebook, a statement by the university pointed to a page collecting "character support" statements, all written by men, for both Mark Smith and Bill Jones, and to another page characterizing the situation as one of "salacious and unproven allegations regarding CIU and its leadership."

In an emotional essay released last month, Albert Mohler Jr., president of the Southern Baptist Theological Seminary, insisted there is a way to continue to preach "male leadership in the home and in the church" without creating "camouflage for abusive males and permission for the abuse and mistreatment of women." The struggle to hold leaders in evangelical institutions accountable, however, may cast doubt on that proposition. But the fact that the conversation is even happening is a remarkable and could, in the long run, lay the foundation for real change in the world of evangelical Christianity.

Meet the force behind #MeToo

Tarana Burke joined "Salon Talks" to discuss where the moment she created is going next.