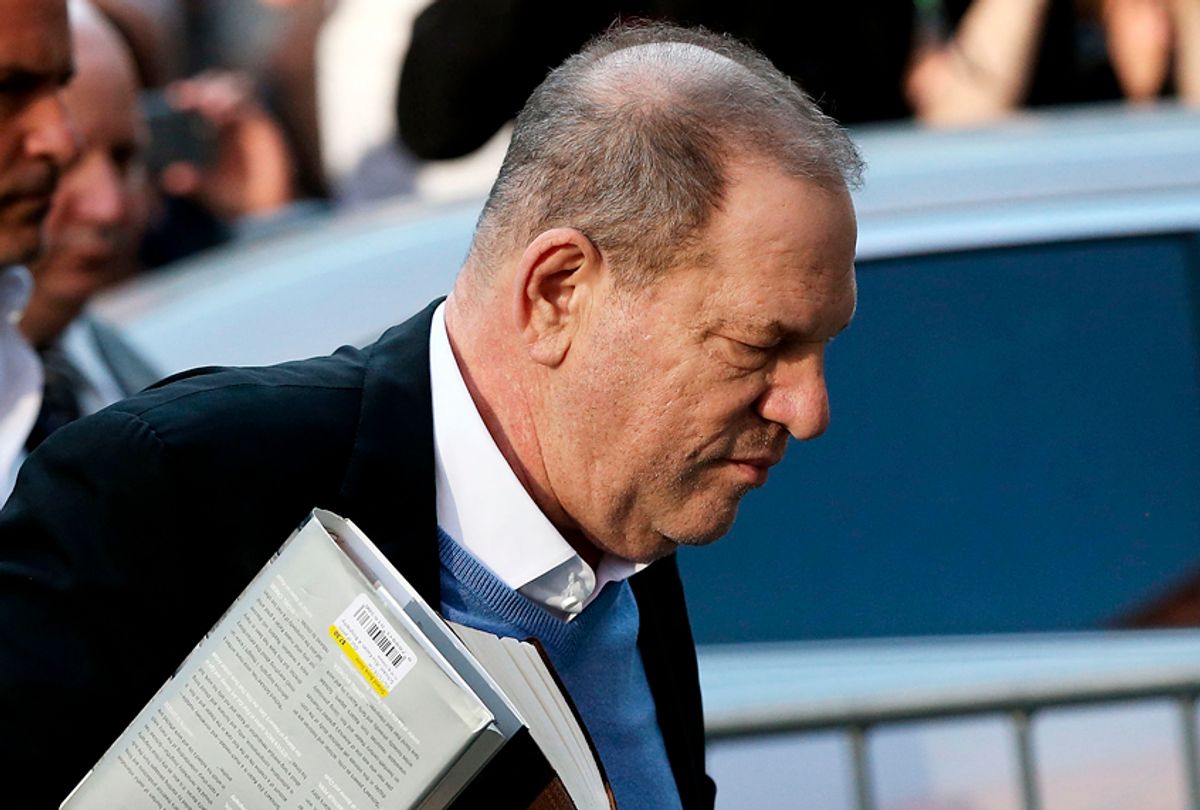 Harvey Weinstein arrives at the New York Police Department's First Precinct to turn himself in after being served with criminal charges by the Manhattan District Attorney's office on May 25, 2018. (Getty/Spencer Platt)
--

UPDATED: After dozens of brave women came forward to publicly share their stories and months of resolute investigative reporting, the Harvey Weinstein saga hit a climax Friday morning as the disgraced Hollywood producer turned himself in to New York authorities.

His bond was set by a New York judge at $10 million. Weinstein paid $1 million in a cashier's check to post bail, and agreed not to travel outside of New York and Connecticut without advance permission from the court. He also agreed to wear a GPS-enabled monitoring ankle bracelet. His next court appearance is July 30.

Wearing a light blue sweater, collared shirt and a dark jacket, the 66-year-old producer clutched three books, among them a biography on controversial filmmaker Elia Kazan. He surrendered himself to police in downtown New York at shortly before 7:30 a.m., at a precinct flooded with reports, news cameras and onlookers, a scene that mirrored red carpets he ruled for decades as a powerful film producer. An hour later, just before 9 a.m., Weinstein left the police station in handcuffs and headed to New York Criminal Court where he faced rape and sex assault charges.

In a statement, the producer's attorneys Benjamin Brafman and Blair Berk said, "Mr. Weinstein has always maintained that he has never engaged in nonconsensual sexual acts."

Weinstein, who was recently expelled from the Academy of Motion Picture Arts and Sciences, has been accused by more than 80 women of misconduct, including sexual harassment and rape. He is also under investigation for alleged sex crimes in Beverly Hills, Los Angeles and London.

The charges follow an avalanche of allegations against Weinstein that motivated women around the world to come forward with allegations of sexual harassment at the hands of powerful men. His alleged victims said the news that Weinstein was expected to turn himself in was a symbol of a shift in the way sexual violence is handled.

"I, and so many of Harvey Weinstein's survivors, had given up hope that our rapist would be held accountable by law. Twenty years ago, I swore that I would right this wrong. Today, we are one step closer to justice," said actress Rose McGowan, one of the first women to speak out against Weinstein, in a statement to the Hollywood Reporter.

"We were young women who were assaulted by Weinstein and later terrorized by his vast network of complicity," McGowan continued. "I stand with my fellow survivors. May this give hope to all victims and survivors everywhere that are telling their truths."

Weinstein has been accused of rape, assault and other forms of sexual misconduct. His representative has said he sought treatment in the wake of the accusations.

Dozens of women have come forward publicly to accuse Weinstein after bombshell exposés in The New York Times and The New Yorker revealed allegations spanning nearly 30 years in late 2017. The reports highlighted that Weinstein's behavior was an open secret in Hollywood.

Two of those women, Asia Argento and Ashley Judd, on Thursday tweeted an article about Weinstein turning himself in.

The women claimed Weinstein threatened to ruin their careers if they went public with their accounts.

On Thursday, New York Times reporter Jodi Kantor recounted in a tweet some of Weinstein's alleged threats, declaring "not anymore."

The allegations catalyzed the decades-old #MeToo movement that calls attention to sexual misconduct. The heightened scrutiny has rippled across industries and ensnared numerous powerful men, from journalists Matt Lauer and Mark Halperin to chef Mario Batali and actor and comedian Aziz Ansari.

Tarana Burke, the activist who launched #MeToo in 2006, said Weinstein's intention to turn himself in marked a turning point in the conversation.

"This moves from the court of public of opinion into an actual courtroom," Burke told Variety. "That is super cathartic for a bunch of the survivors, or even survivors who are not necessarily victimized by him."

This is a developing story. It will be updated.