Matt Lauer gave co-worker a sex toy, exposed himself to another: report

After NBC fired the "Today" show anchor, Variety released an explosive exposé detailing the allegations against him 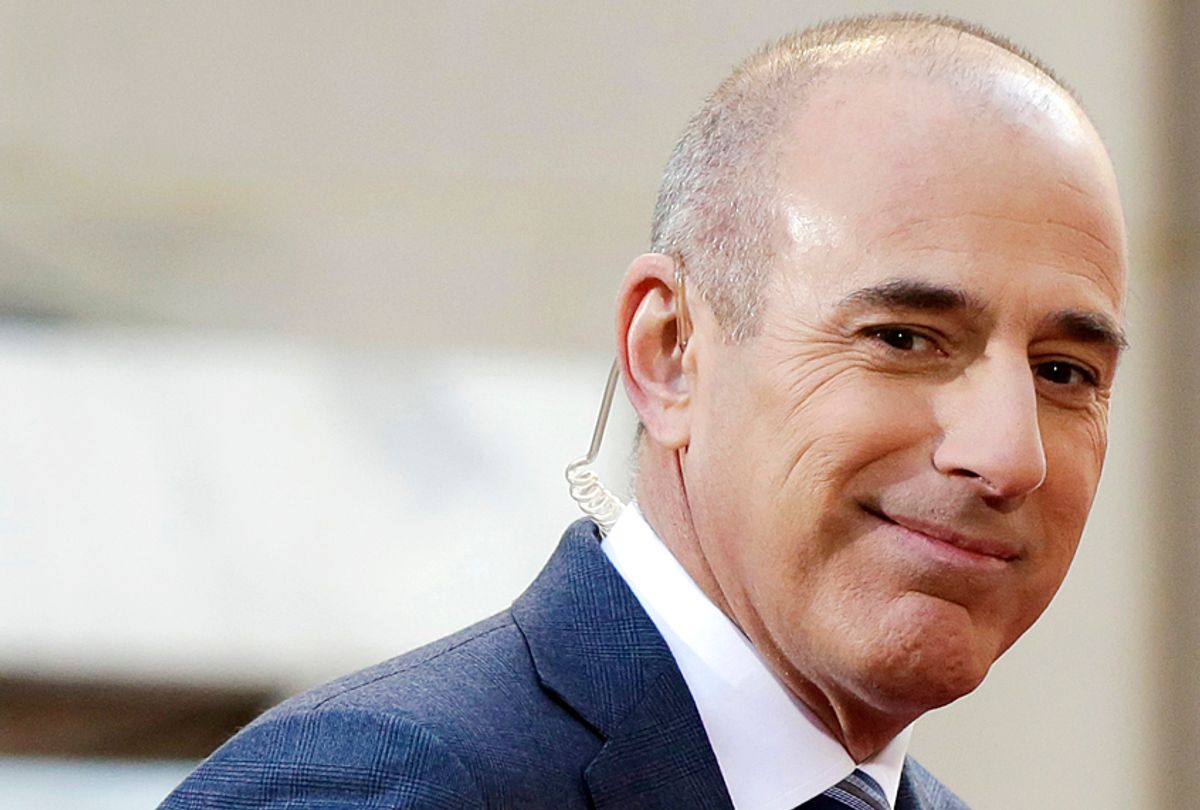 Following his termination by NBC on Wednesday for the very generalized claims of "inappropriate sexual behavior," Matt Lauer is now facing a series of much more specific allegations outlined in a blistering report published by Variety.

Most troublingly, the article by Ramin Setoodeh reports that a co-worker alleged Lauer gave her a "sex toy" as a gift, along with an "explicit note about how he wanted to use it on her, which left her mortified." In addition, Setoodeh reported that on another occasion, Lauer "summoned a different female employee to his office, and then dropped his pants, showing her his penis. After the employee declined to do anything, visibly shaken, he reprimanded her for not engaging in a sexual act."

Overall, the piece paints a disturbing portrait of what may have been going on behind the scenes at NBC News and the various network properties Lauer was attached to over the last 25 years. According to Setoodeh, multiple people said a current NBC employee met with network human resources Monday night in connection to a pattern of "inappropriate sexual conduct" that Lauer allegedly began during the Sochi Olympics in 2014.

Ten more current and former NBC employees claimed that Lauer has long made "lewd comments," put women in embarrassing situations and engaged in consensual relationships within the NBC workforce. But, said one former NBC producer who worked with Lauer, "that’s still a problem because of the power he held . . .  He couldn’t sleep around town with celebrities or on the road with random people, because he’s Matt Lauer and he’s married. So he’d have to do it within his stable, where he exerted power, and he knew people wouldn’t ever complain."

For Lauer, Variety wrote, "work and sex were intertwined."

Despite the producer's claims that Lauer enjoyed safety within the NBC ranks, Variety reports that women did indeed complain about his behavior, constantly.

Several women told Variety they complained to executives at the network about Lauer’s behavior, which fell on deaf ears given the lucrative advertising surrounding “Today.” NBC declined to comment. For most of Lauer’s tenture at “Today,” the morning news show was No. 1 in the ratings, and executives were eager to keep him happy.

“Management sucks there,” a former network reporter told Variety. "They protected the shit out of Matt Lauer.”

That protection, it would seem, allowed Lauer to create somewhat of a dragon's lair for his alleged predatory behavior. Wrote Setoodeh:

[Lauer's] office was in a secluded space, and he had a button under his desk that allowed him to lock his door from the inside without getting up. This afforded him the assurance of privacy. It allowed him to welcome female employees and initiate inappropriate contact while knowing nobody could walk in on him, according to two women who were sexually harassed by Lauer.

There are other specific allegations in the piece, but Variety offers no names to support the allegations.

What is just as troubling as all of the accusations is the chilling effect Lauer may have had on NBC coverage of other cases of infidelity and sexual harassment. Variety reports that "Lauer — who had considerable editorial clout over which stories would ultimately air on 'Today'— would frequently dismiss stories about cheating husbands."

Setoodeh suggests this changed in recent months as the news cycle became dominated by continued accusations of sexual abuse against high-profile men. Still, one has to wonder how Lauer's power as a newsmaker contributed to the air of permissiveness and the codes of silence only now being broken down by the wave of allegations that began with the twined exposés in The New York Times and The New Yorker on Harvey Weinstein.

Indeed, while the decision to pass on it happened at a higher level than Lauer's, it's worth remembering that it was NBC News that first killed Ronan Farrow's report on Weinstein — the very one that was eventually published in The New Yorker, instigated the Times piece and thus began the still rolling avalanche of accusations against powerful men in the first place. And it was Lauer who allowed disgraced Fox News host Bill O'Reilly a platform to rehabilitate his image only months after career-crushing allegations of sexual harassment.

“You were probably the last guy in the world that they wanted to fire because you were the guy that the ratings and the revenues were built on. You carried that network on your shoulders for a lot of years,” Lauer told O'Reilly only two months ago.