Trump has persistently condemned the players' peaceful and silent protests 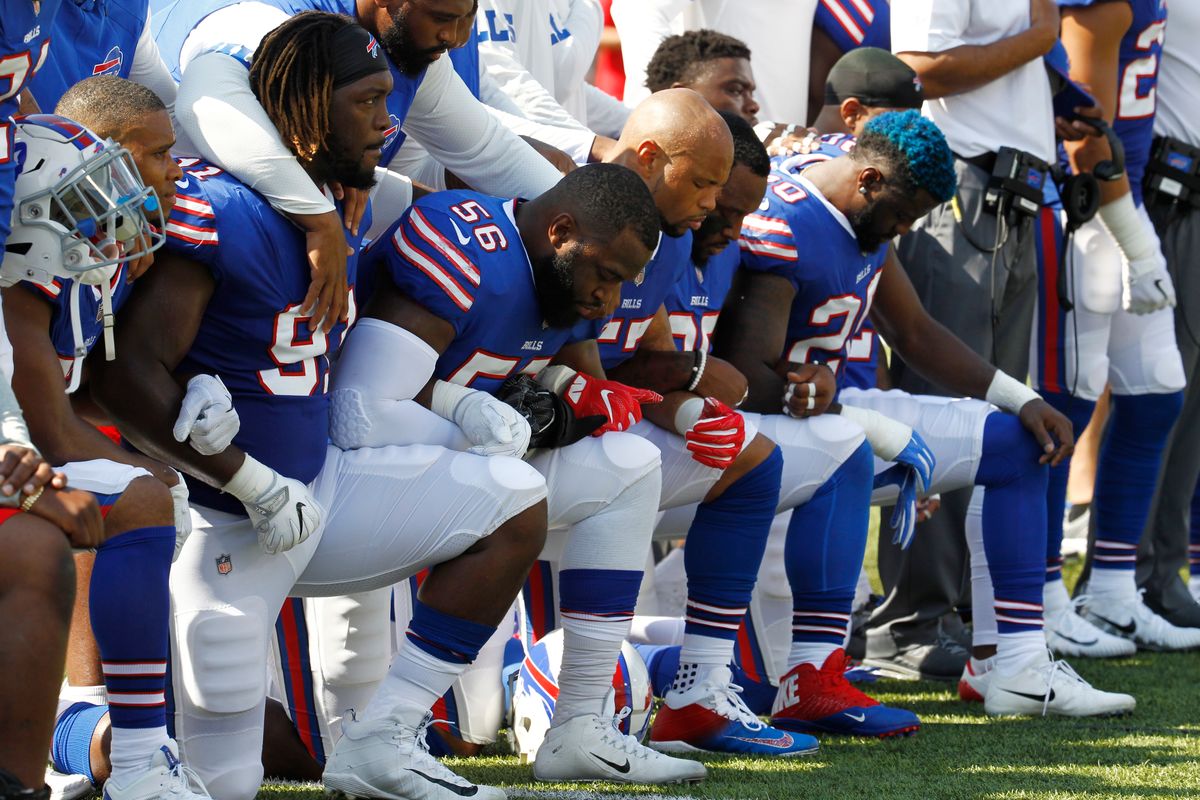 On August 26, 2016, then-San Francisco 49ers quarterback Colin Kaepernick refused to stand for the National Anthem, triggering a national debate around First Amendment rights of speech and issues of racial injustice.

The very next day, the National Football League (NFL) and the 49ers issued separate statements about the incident, and NFL Players Association (NFLPA) executive director DeMaurice Smith did an in-depth interview with The Nation’s sports editor Dave Zirin.

"Players are encouraged but not required to stand during the playing of the National Anthem," the NFL said, echoing existing policy in the NFL game operations manual. The 49ers emphasized that "respecting such American principles as freedom of religion and freedom of expression, we recognize the right of an individual to choose to participate, or not, in our celebration of the national anthem."

Smith's interview responses generally supported freedom of expression and unequivocally backed Kaepernick. "There is never going to be a day where this union is going to sit back idly and allow anybody to trample our players’ rights," he said.

More than a year later, President Donald Trump launched a scathing attack on protesting players and demanded they be fired. The NFL and the union responded immediately in the players' defense. Trump continued to denounce the protests for weeks and called on football fans to boycott games. Dallas Cowboys team owner Jerry Jones threatened to bench protesting players after consulting with Trump.

The controversy spurred the NFLPA's October 9 statement on player's constitutional rights. Two days later, the league and the union issued a joint statement confirming that there was no change in policy around protests. On October 17, a much publicized meeting of the NFL and NFLPA resulted in an agreement "to review and discuss plans to utilize our platform to promote equality and effectuate positive change." No player would be disciplined for protesting during the Anthem.

Then, last week, NFL owners abruptly and unilaterally imposed a "new policy" that banned on-field protests and threatened teams and players who would violate it.

The announcement came a day after the release of a shocking video showing Milwaukee police attacking, tasing and arresting  Sterling Brown — a young, unarmed, black, professional basketball player — over a parking violation.

Contrasts in black and white

While the NFL may believe they can shut down free speech on the field, the union puts players in a strong position to defend their right to protest in the face of racial injustice, hostile bosses and Trump.

Kaepernick has remained persona non grata among team owners since becoming a free agent in March 2017. Dozens of players and members of the public have protested with that in mind as well as the spate of arrests, maltreatment and, in some cases, deaths of African Americans in the hands of police.

Even as deaths by police increased in 2017, Trump remained largely silent on the subject — with one notable exception. Speaking before law enforcement officers in Suffolk County, NY, he evoked grim memories of the 2015 death of Freddie Gray: "When you see these towns and when you see these thugs being thrown into the back of a paddy wagon, you just see ’em thrown in rough. I said please don’t be too nice."

A number of police chiefs around the country quickly condemned his remarks as endorsing police brutality.

Trump's history of racism and, at best, racial insensitivity shed light on the origins of his defense of so-called "alt right" groups — including white nationalists and neo-Nazis — responsible for the violent protest in Charlottesville, Virginia, that ended with one death and multiple injuries of innocent bystanders. After commending "some very fine people" among the alt right, Trump garnered praise from various leaders of the movement, including Richard Spencer.

Yet, when it comes to a professional football league that is 70 percent African American, Trump has persistently condemned the players' peaceful and silent protests. He has demanded their termination and most recently suggested that they "shouldn't be in the country."

Constitutional law expert Laurence Tribe has observed that Trump "appears to have violated or at least attempted to violate 18 USC sec 227(a)(2)." The code forms the basis of an ethics complaint from an anti-Trump group charging the president with trying to "influence or threaten to influence a private employment decision."

On Thursday, NBC Sports and other outlets reported on the testimony of Dallas Cowboys owner Jerry Jones in Kaepernick case. Jones claimed that Trump pressed him on the protest controversy, telling him: “This is a very winning, strong issue for me. Tell everybody, you can’t win this one. This one lifts me.”

Looking at the reasons for protests as well as the treatment of the players, law professor Noah Zatz at the University of California, Los Angeles, wrote in October, "There is a strong argument that benching, suspending . . . or firing players for 'taking a knee' would run afoul of Title VII, the federal law that prohibits race discrimination in employment."

Meanwhile, some legal experts have challenged the players' First Amendment rights to protest during the anthem. Harvard law professor emeritus Alan Dershowitz was among them, asserting on a radio show in October:

Dershowitz et al, however, overlooked two essential facts: Up until last week when the NFL reversed course, the league and the union had repeatedly affirmed players' First Amendment rights, and the person who had openly tried to suppress those rights is the President of the United States.

Perhaps the most full-throated legal opinion in favor of the players to date comes from Benjamin Sachs, professor of labor and industry at Harvard Law School. Writing for Vox, he offered multiple reasons why, as the headline states, "The NFL’s 'take a knee' ban is flatly illegal."

Primarily rooted in the players' rights as union members with a collective bargaining agreement (CBA) firmly in place, Sachs' analysis aligns with In These Times’ November report on the labor laws and contract provisions that yielded the October NFL/NFLPA deal preserving the status quo.

The NFL has now violated that deal. Absent a change of heart by the league, the union response could be to resort to the CBA's grievance procedures, but there is also compelling labor law that could bring a complaint directly to the National Labor Relations Board. As Sachs points out:

The clearest illegality derives from the fact that the league adopted its new policy without bargaining with the players union. When employees, including football players, are represented by a union, the employer — including a football league — can't change the terms of employment without discussing the change with the union. Doing so is a flagrant violation of the employer’s duty to bargain in good faith.

Sachs notes that the recent Supreme Court decision in Epic Systems Corp. v. Lewis ( judged by many to be a disaster for working people) actually underscores the right of union members to engage in "concerted activity," as labor law provides. Where the decision went wrong was in undermining that right for nonunion workers contrary to longstanding application and understanding of the law.

Sachs also brings up underlying legal principles to support First Amendment and discrimination laws, but the strongest protections he cites arise from a legal and binding union contract.

The true power of collective bargaining is that, despite differences in rights and obligations, both labor and management are co-equal parties to the contract. This was evident as the NFL and NLPA grappled with the protest controversy last fall. Management clearly understood that union workers are not "at will" employees like their nonunion counterparts and consequently can't be fired on a whim without recourse — like Trump demanded.

Of course, bosses can try — as they are now, and as they often do when the motive to breach a law or a contract is more enticing than compliance. They could argue, for example, that the contract gives them the right to set reasonable rules (which it does under Article 42), but how reasonable is a rule that the NFL abandoned last year after the union intervened?

In matters of discipline, the employer must show just cause by proving that the worker breached a policy that was reasonable, known and consistently applied, and that discipline was reasonable and proportional. Now that the NFL is pushing a new policy, the only possible point to win would be on the "known" rule standard, but everything else would likely fail. The NFL and team owners have advanced a muddled policy with dubious justifications that Jay Willis of GQ frankly characterized as "beyond stupid." In short, if a sports commentary can punch holes in it, imagine what the union and its lawyers could do.

Even as an unemployed free agent, Colin Kaepernick, too, is protected and is pursuing a high-profile grievance charging the NFL and team owners with violating Article 17, "Anti-Collusion," of the 2011-2020 collective bargaining agreement. The grievance asserts that Kaepernick was deprived of employment because of his "leadership and advocacy for equality and social justice and his bringing awareness to peculiar institutions still undermining racial equality in the United States."

The grievance notes the teams' "unusual and bizarre behavior" toward Kaepernick after Trump repeatedly pressured owners to fire protesters. NFL and team owners, the grievance charges, "retaliated against Mr. Kaepernick in response to coercion and calculated coordination from the Executive Branch of the United States government."

Imagine that liability compounded by each player who could be fired as a result of a policy born of more collusion and disregard of the law. Alternatively, imagine players capitulating to the policy and the hard feelings and low morale that would follow. How does either scenario serve the game? There is much to lose if the NFL refuses to settle this dispute cleanly, fairly and expeditiously—and the best shot at that is a mutual agreement with the NFLPA that not everyone may like but everyone can live with. Such is the nature of collective bargaining.

There's no question that professional football players, like other high-paid celebrities, are in a unique position compared to average, workaday union members. They are literally and figuratively in a league of their own. But consider their alternatives without union protection when the external force exerted on them comes from none other than "the leader of the free world." It's not hard to see, then, that with a union contract in place, it is indeed a whole other ballgame.