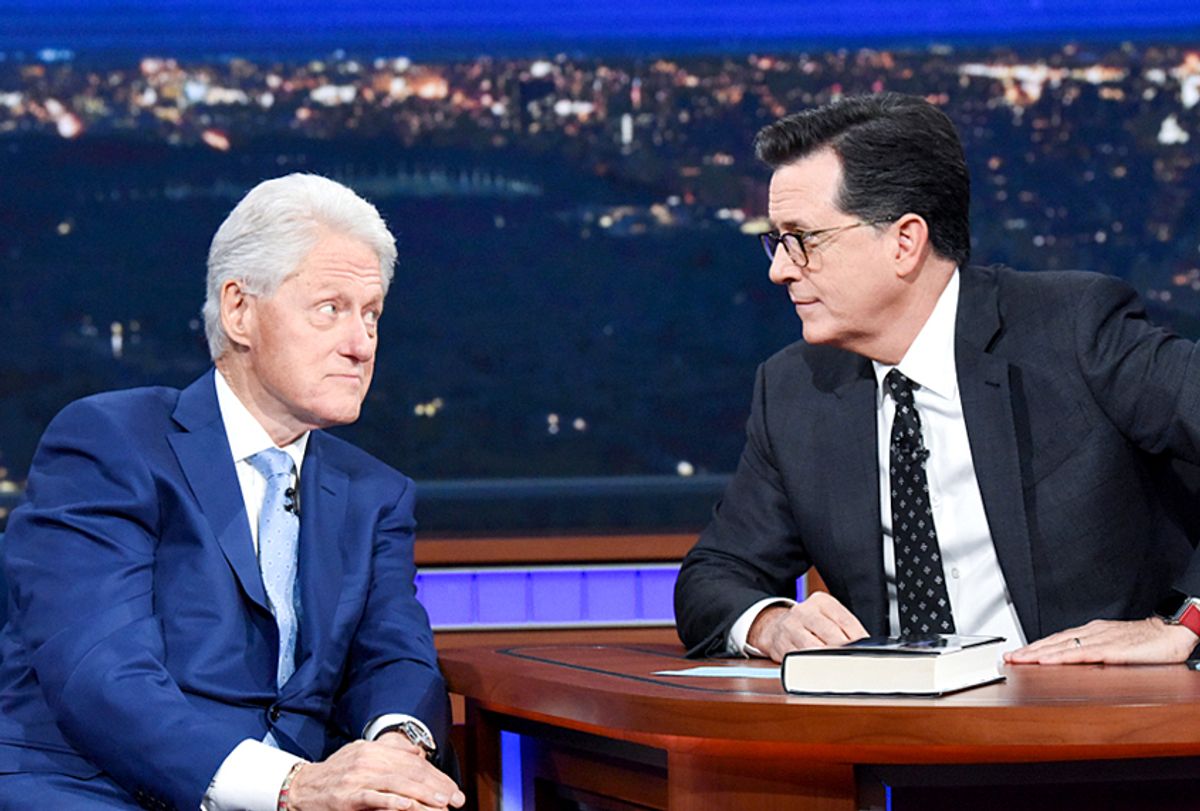 When former President Bill Clinton appeared on "The Late Show" with Stephen Colbert Tuesday night, the late-night host offered him a "do-over." Clinton had come under serious fire for what was characterized as an insensitive response to the power dynamics between himself and Monica Lewinsky in the 1990s (she: 24 and a White House intern; he: the president), especially in the age of #MeToo. During an interview Monday on NBC's "Today," Clinton dismissed questions related to Lewinsky and maintained that 20 years later, his response would not have changed.

"Do you understand why some people thought that was a tone-deaf response?" Colbert asked.

"When I saw the interview," Clinton replied, "they had to distill it, and it looked like I was saying I didn't apologize and I had no intention to, and I was mad at me."

"It wasn't my finest hour," he continued. "But the important thing is, that was a very painful thing that happened 20 years ago and I apologized to my family, to Monica Lewinsky and her family, to the American people. I meant it then, I meant it now. I've had to live with the consequences every day since."

Despite his fumble in reflecting back on his actions with Lewinsky and what the power imbalance between them was, given his stature and position, Clinton is still a strong supporter of the #MeToo movement. He told Colbert, "I still believe this #MeToo movement is long overdue, necessary and should be supported." The audience erupted in applause. "And I'd like to think that we're all getting better as we go along."

Clinton and novelist James Patterson are just beginning to make the rounds on the press circuit to promote a book they co-authored called "The President is Missing." Clinton's controversial statements, where he admitted that he never privately apologized to Lewinsky and didn't owe her one, came on day one of this tour. "Nobody believes that I got out of that for free," he told NBC's Craig Melvin. "I left the White House $16 million in debt. This was litigated 20 years ago. Two-thirds of the American people sided with me."

Patterson came to Clinton's defense. "I've spent a year now with President Clinton," he told Colbert. "But in that year, I found he's just a wonderful, wonderful, wonderful human being." He went on to tout Clinton's record of helping people around the world, especially in his post-presidency.

Despite Patterson's deflection, Colbert grilled further. An issue he pointed out with the "Today" interview is that Clinton seemed surprised or even offended to be asked about Lewinsky, even though "the spirit of #MeToo movement is that it doesn't matter how long ago it happened," Colbert said. "Examples of men who were not held accountable for their behavior, especially men in power with younger women or people who worked for them, is worthy of being re-adjudicated or adjudicated for the first time."

Colbert described Clinton's behavior as "the most famous example of a powerful man sexually misbehaving in the workplace of my lifetime."

Clinton said he took issue with the question because the assertion was that he never apologized or never tried to reckon with his actions and was not held accountable. He then just reiterated his earlier talking points: Clinton supports #MeToo.