Clinton became visibly flustered when grilled about the Lewinsky scandal: "I did the right thing!" 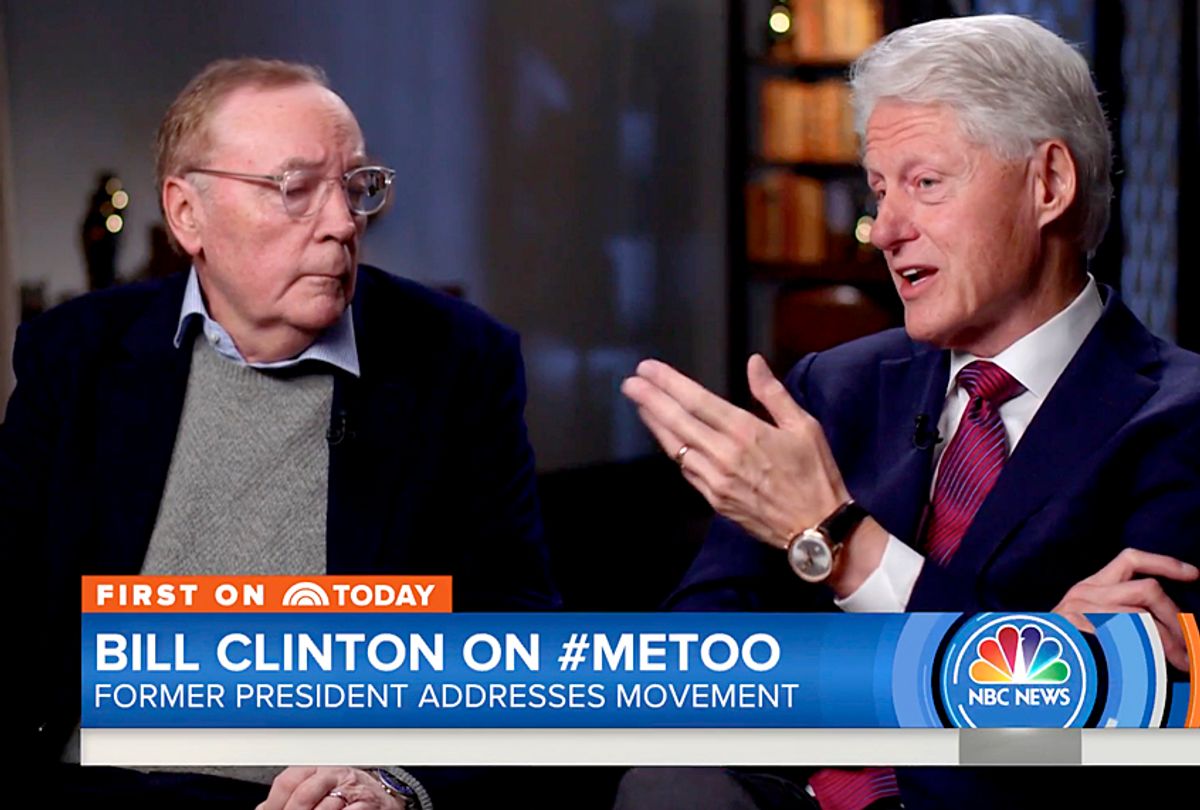 Things got testy between Bill Clinton and NBC News' Craig Melvin when the host grilled the former president about Monica Lewinsky and the #MeToo movement.

Clinton appeared on a Monday morning "Today" segment with novelist James Patterson to discuss a book that the two of them co-authored called "The President Is Missing," but Melvin opened by broaching an uncomfortable question about one of the most notorious scandals from Clinton's past.

"I don’t think it would be an issue because people would be using the facts instead of the imagined facts. If the facts were the same today, I wouldn’t [resign]," Clinton told Melvin about the affair with former White House intern Monica Lewinsky that derailed his presidency in its second term.

He added, "A lot of the facts have been conveniently omitted to make the story work, I think partly because they are frustrated that they got all these serious allegations against the current occupant of the Oval Office and his voters don’t seem to care. I think I did the right thing, I defended the Constitution."

After Melvin asked Clinton whether he felt President Donald Trump had been given a pass regarding the accusations of sexual misconduct that have been made against him, Clinton said that he had not but that "it hasn't gotten anything like the coverage you would expect."

Clinton also admitted that he had never privately apologized to Monica Lewinsky, although he counted his public apology to the American people as essentially the same as a private apology to the former White House intern.

"Nobody believes that I got out of that for free," Clinton told Melvin. "I left the White House $16 million in debt. But you, typically, have ignored gaping facts in describing this and I bet you don’t even know them. This was litigated 20 years ago. Two-thirds of the American people sided with me. They were not insensitive to that.”

Patterson, at one point, interjected to defend the former president, telling Melvin that "I think this thing has been — it was 20 years ago. Come on."

Clinton also made it clear to Melvin that he was no longer interested in discussing the subject.

"Someone should ask you these questions because of the way you formulate these questions. I dealt with it 20 years ago plus, and the American people, two-thirds of them, stayed with me. And I’ve tried to do a good job since then with my life and with my work. That’s all I have to say to you," Clinton told Melvin.

When Clinton referred to the accusations against Trump, he was referring to nearly a dozen women who have claimed that Trump engaged in various forms of unwanted and aggressive sexual behavior against them before he became president. These accusations nearly derailed his 2016 presidential campaign, although he was ultimately elected anyway.

In an editorial for Vanity Fair in February, Lewinsky reevaluated the nature of her affair with Clinton and argued that, while the relationship had been consensual, Clinton had taken advantage of his power over her in ways that were inappropriate.

Given my PTSD and my understanding of trauma, it’s very likely that my thinking would not necessarily be changing at this time had it not been for the #MeToo movement—not only because of the new lens it has provided but also because of how it has offered new avenues toward the safety that comes from solidarity. Just four years ago, in an essay for this magazine, I wrote the following: “Sure, my boss took advantage of me, but I will always remain firm on this point: it was a consensual relationship. Any ‘abuse’ came in the aftermath, when I was made a scapegoat in order to protect his powerful position.” I now see how problematic it was that the two of us even got to a place where there was a question of consent. Instead, the road that led there was littered with inappropriate abuse of authority, station, and privilege. (Full stop.)

Now, at 44, I’m beginning (just beginning) to consider the implications of the power differentials that were so vast between a president and a White House intern. I’m beginning to entertain the notion that in such a circumstance the idea of consent might well be rendered moot. (Although power imbalances—and the ability to abuse them—do exist even when the sex has been consensual.)

Lewinsky's past with Clinton also came to the forefront of the public mind last month when Town & Country magazine uninvited her to its annual philanthropy party after Clinton also decided to go, according to NBC News. Lewinsky tweeted about the situation to draw attention to it.

dear world:
please don't invite me to an event (esp one about social change) and --then after i've accepted-- uninvite me because bill clinton then decided to attend/was invited.
it's 2018.
emily post would def not approve.
✌🏼Me

Clinton has also spoken publicly about the ongoing scandals besetting Trump regarding alleged collusion between his presidential campaign and the Russian government. Talking to CBS on Sunday morning, Clinton argued that if a Democrat was president instead of a Republican, impeachment hearings would have already commenced.

"I think if the roles were reversed -- now, this is me just talking, but it's based on my experience -- if it were a Democratic president, and these facts were present, most people I know in Washington believe impeachment hearings would have begun already," Clinton told "CBS Sunday Morning," according to CNN. He added, "And most people I know believe that the press would have been that hard, or harder. But these are serious issues."

Clinton appeared on "The Today Show" on Monday to promote a political thriller that he co-authored with James Patterson, who is currently the best-selling author in the world. "I've consumed literally thousands and thousands of thrillers, political novels, all this kind of stuff. You know, he's just good at it. But I wanted it to be real. I want people – I didn't want anybody able to say, 'Oh, this is just made up bull,' you know?" Clinton told CBS News. In his book review, Ron Charles of The Washington Post wrote:

The CIA can relax. Surely, no black felt-tip pens went dry redacting classified material from this manuscript. “The President Is Missing” reveals as many secrets about the U.S. government as “The Pink Panther” reveals about the French government. And yet it provides plenty of insight on the former president’s ego.

He later added, "As a fabulous revision of Clinton’s own life and impeachment scandal, this is dazzling. (One only wishes Rep. Henry Hyde could have lived long enough to attend the book party.) The transfiguration of William Jefferson Clinton into Jonathan Lincoln Duncan should be studied in psych departments for years. Both men lost their fathers early and rose from hardscrabble circumstances to become governors. Both men met their brilliant wives in law school, and both couples have one daughter."