Dreamed up by a segregationist to curb multiracial organizing, "right-to-work" laws continue to bedevil labor 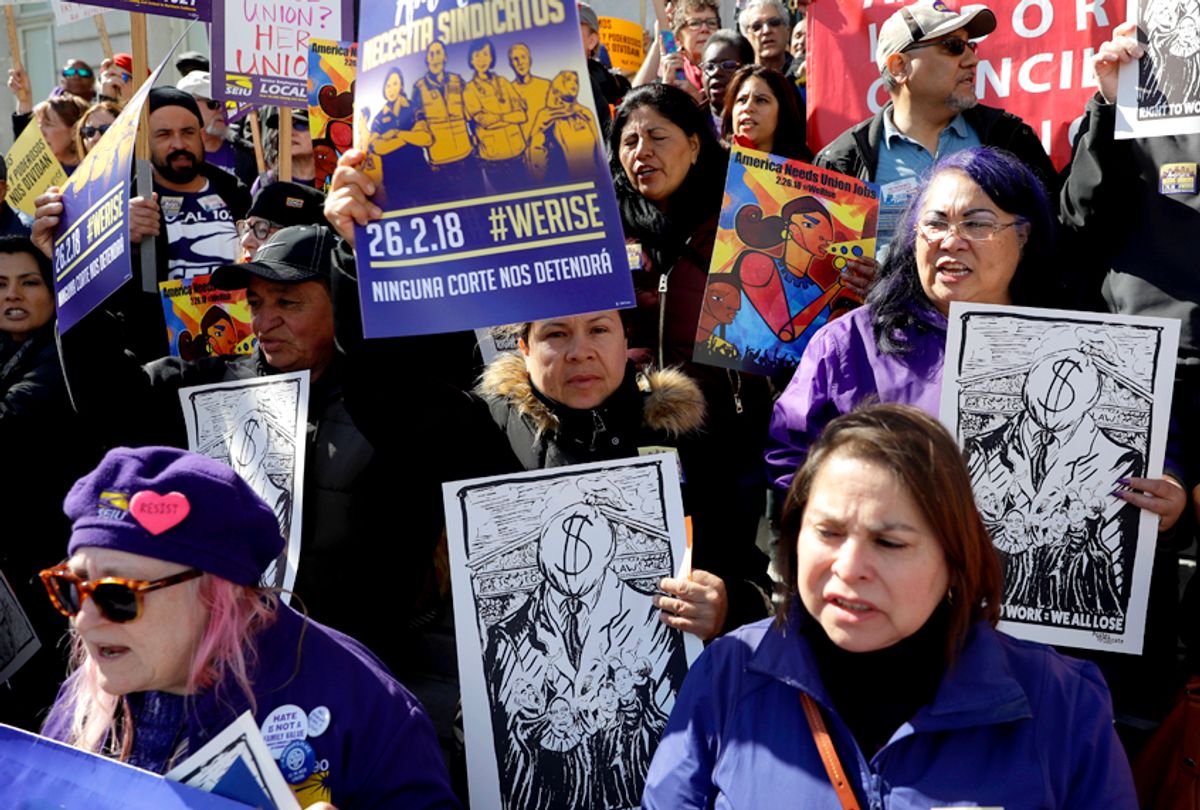 The U.S. Supreme Court will soon hand down its decision in Janus v. AFSCME Council 31, which challenges the ability of public sector unions to collect “fair share” fees from workers who are covered by a negotiated union contract but don’t want to join the union. While the case may seem technocratic, its argument is one thread of a well-worn tapestry by conservatives: attacking union rights to thwart working-class solidarity, especially across racial and ethnic lines.

At the heart of the case is what are deceptively known as “right-to-work” laws, which were conceived with the sole intention of maintaining racial wage hierarchies in the Jim Crow South as part of a larger conservative backlash to the success of union organizing in the years immediately following the passage of the National Labor Relations Act (also known as the Wagner Act) in 1935. We have to go that far back because what Congress did in that year, as long ago as it seems, greatly constrains working-class power today.

The Wagner Act essentially legalized the rights of employees to organize in unions and developed the process of union certification through a new agency created under the law, the National Labor Relations Board. It’s hard to overstate the radical nature of this law at the time it was enacted — and how surprising it was that the law was upheld by the Supreme Court. It seemed destined to be overturned, given the Court’s longstanding opposition to government involvement in the economy.

Indeed, most of the big corporations at the time — DuPont, General Motors and Republic Steel — ignored the law under this assumption, carrying on their normal business of fighting union attempts by firing activists, hiring spies, and stocking up on guns and tear gas. They funded the legal challenge to the National Labor Relations Act and a major public relations effort to smear the law in the court of public opinion. But in a 1937 decision in National Labor Relations Board v. Jones & Laughlin Steel Corporation, the Supreme Court declared the Wagner Act constitutional by sustaining Congress’s power to regulate employers under the commerce clause.

Within a year-and-a-half, 3 million new workers voted to be represented by a union in the Congress of Industrial Organizations (CIO). As America entered World War II and demand for machinery, ammunitions and aircraft soared, another 5 million workers voted for a union in just three years, including many women and African-Americans, who had gained new protections under federal contracts related to the war effort.

By the end of the 1940s, nearly one-third of American workers were unionized, winning contracts for better wages, job security and benefits. With unprecedented gains in the North and Midwest, the CIO set its sights on organizing the Jim Crow South. Termed Operation Dixie, the CIO aimed to organize one million Southern white and black workers, provoking the ire of Southern segregationists who rightly worried that working-class solidarity between blacks and whites would uproot the political power structure of the South.

It turned out that the Wagner Act did exactly what it was supposed to do — unleash a great spurt of workplace democracy — and segregationists and business leaders were less than pleased. So Republicans and Southern Democrats in Congress drafted a bill that would amend the Wagner Act by gutting many of the hard-fought labor rights it guaranteed. The bill, passed over President Truman’s veto, is known as Taft-Hartley for its co-sponsors, Senator Robert Taft and Representative Fred Hartley.

Taft-Hartley provided so-called free-speech rights to employers during an NLRB election, providing companies ample time and leeway to spread false and anti-union information to its workers. Employers could now hold mandatory meetings with workers to detail the perils of welcoming a union into the workplace, intimating that their jobs, or indeed the entire factory, might up and disappear. The Taft-Hartley amendments also outlawed industry-wide strikes, secondary boycotts, and sympathy strikes and gave the president more expansive authority to obtain injunctions against strikes if they jeopardized national interests.

Its most ideological mandate was to require all union officers to sign an affidavit saying that they were not members of the Communist Party. At the time, some of the most effective organizers in the labor movement were Communists. After Taft-Hartley was passed, some unions collapsed and others were purged from the CIO or left rather than signing the pledge. As intended, this provision of the law neutered the most radical and effective elements in the labor movement and washed the labor movement free of its most ardent supporters of women’s and civil rights.

Taft-Hartley also allowed states to pass “right-to-work” laws, which gave workers, even in a unionized workplace, the right to refuse to pay fair-share fees. Under these laws, workers can free-ride — enjoy the benefits of representation without having to pay for it — which makes the establishment and sustenance of a new union a much riskier proposition. In states without right-to-work laws, all workers who benefit from a union contract must pay a fair-share fee, even if they decline union membership. This fee basically represents the worker’s portion of the costs of the union’s providing collective bargaining and other benefits. This is a smaller fee than the overall union dues, which cover broader costs, such as political funding and lobbying.

That loss of revenue makes organizing in right-to-work states much more financially precarious and is a major reason that union density in those states is so much lower. In the aftermath of Taft-Hartley, a number of states quickly passed so-called “right-to-work” laws. Ten states, mostly in the South, passed them immediately in 1947, followed by another half dozen or so in the early 1950s.

It’s a technocratic policy with profound consequences, dreamed up by a rather infamous segregationist.

The development and promotion of “right-to-work” laws is largely credited to Vance Muse, a Texas oil industry lobbyist and known white supremacist who warned that without such legislation to impede union organizing, “white women and white men will be forced into organizations with black African apes whom they will have to call ‘brother’ or lose their jobs.” When it came to squashing working class solidarity, big business and segregationists forged common cause — an alliance in the history books with significant impacts on worker’s rights today.

Right-to-work laws and other anti-union efforts are aimed at consolidating economic and political power for businesses and capital by preventing any whiff of working-class solidarity. Through union dues, the labor movement can amass significant resources to engage in voter turnout, agenda setting and issue advocacy, all on behalf of ordinary Americans. It is that amassing of political power — in addition to the fairer distribution of profits — that is so threatening to conservatives and corporate America. After all, big labor has been responsible for advances in our day-to-day lives that still make conservatives livid: Medicare, Medicaid and, yes, Obamacare too; unemployment insurance; Social Security; the 40-hour workweek; pensions (what’s left of them, anyway); the minimum wage. These are just the greatest hits; many other humane advances in our lives owe their existence to labor unions.

Big business saw the weakening of union rights as the first step in a campaign to bring down the entire New Deal order, and weren’t shy about saying so. At the end of the war, Alfred Sloan, CEO of General Motors, spoke honestly about his disdain for the New Deal, saying, “It took 14 years to rid this country of Prohibition. It is going to take a good while to rid the country of the New Deal, but sooner or later the ax falls and we get a change.”

Power in America might be thought of as being historically represented by two scales. On the left is labor and on the right is capital. When one side loses political clout, the other side gains it. Today the right side of the scale overpowers the left. And that was no accident.

If the court sides with the plaintiff in Janus, it would essentially nationalize “right-to-work” laws in the public sector. All of us will pay the price — in the form of lower wages, job insecurity, miserly benefits and soaring inequality — so America’s plutocrats can tighten the political and economic vise that leaves most of us struggling.

These same plutocrats will point the finger for our struggles at new immigrants, black people and the poor, in a well-worn narrative that allows some politicians and their corporate donors to tilt the rules in their favor while the rest of us fight among ourselves for the leftovers. But we can change. We can come together across racial and ethnic lines to elect new leaders who will represent all of us, not just the wealthy few. We can start by refusing to fall for the divide-and-conquer politics at issue in the Janus case.

How millennials reawakened the labor movement

After decades of decline in union membership, younger workers are signing up