It started with an "Apprentice" audition. Then he was hired to teach at Trump University

"It was like a cheesy B movie," says Stephen Gilpin about the bizarre meeting where he landed this very strange job 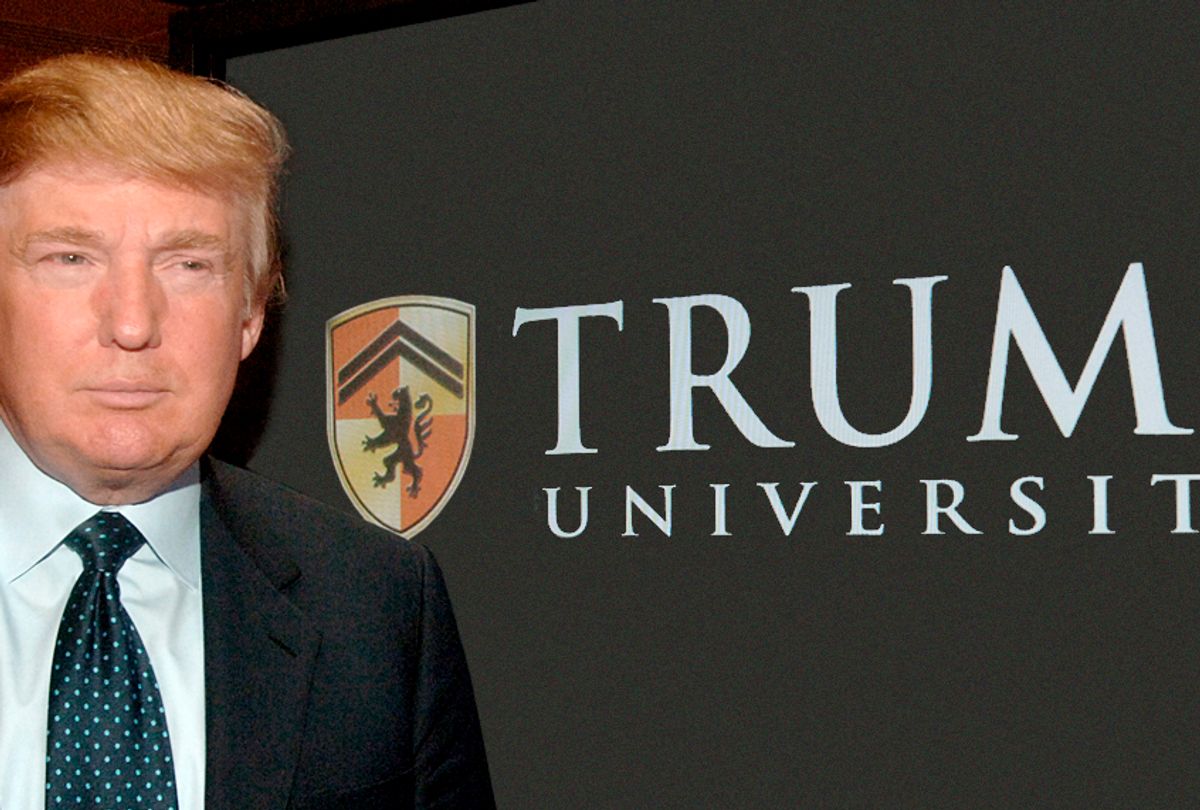 Of the many scandals swirling around Donald Trump prior to his surprise election as president in 2016, perhaps the most telling — if tragically underplayed by the mainstream media — was the legal drama around Trump University. Trump sold the alleged "school" as a place for aspiring entrepreneurs to gain the necessary skills to make money in real estate. But the lawsuits that followed paint a different picture.

"Instead of a fast route to easy money, these Trump University students say they found generic seminars led by salesmen who pressured them to invest more cash in additional courses," wrote Emma Brown of The Washington Post. "The students say they didn’t learn Trump’s secrets and never received the one-on-one guidance they expected."

This transcript has been edited for length and clarity.

How is it that you ended up becoming an instructor at Trump University?

I applied for "The Apprentice" at Universal Studios. Then that's how they think they got my resume, but then what happened was, I received a phone call. I owned a mortgage brokerage business and I employed about 3,000 other agents at Mortgage Max Direct Lending and my company.

We were down in the Fort Lauderdale area and down in the Miami area and Palm Beach County area where Donald Trump had his house that had purchased that same year. I've worked with a couple of friends and staff of Donald Trump's and people that knew him, and of him in that were associates basically of him. I received a phone call from a woman named Sandra in Florida to ask me to come up to interview for Trump.

They asked me several questions about real estate, real estate transaction, my credentials, how many houses I bought, fixed and flipped, my teaching abilities, my licensing. Did I ever file bankruptcy? Did I ever file foreclosure and stuff like that? I didn't know what I was interviewing for, which was kind of funny.

It was like a cheesy B movie where they sat in the conference room and they slid a paper across [the table]. I'll never forget it. I think I probably still have it. And it had a dollar amount on it. They were offering me, I guess, a job.

I accepted the job and that's when they started telling me that Donald Trump owns the school, and it's a company that is about Donald Trump and the way Donald Trump invests in real estate.

The company has been accused of being basically a con job. It's been accused of cheating students, claiming that they were going to get an education but not doing that. What were your experiences of it?

The first two years when I started working there, it actually was a very good program. They had legit professors and all. At the time I started, I didn't realize they were getting rid of all these legit professors and these legit instructors who actually were credentialed people. I understand businesswise why they got rid of them because they were high-paying professors who were credentialed, and they weren't making as much money. And it's a business, and for the business to run, Donald Trump, he himself will say, you got to bring in the money. They changed the way they did business to live events [designed to] sell.

They hired high professional — I call them sharks.

They hired sharks whose own purpose was to go out there and sell [customers] into the Trump University package and the Trump University way of doing business in real estate. That's when it was just high-pressured sales, and that's when it really started changing, and the people that were doing the high-pressured sales really didn't have any real estate background knowledge.

How did you react to realizing that the company was kind of sliding towards this grifting model?

I brought it to the owners' attention. Because first off, we had to fix it. You couldn't do it.

They're like, “You've got to keep quiet. You're giving away too much and you got to let them sell.”

I was thinking to myself that was bizarre, because these people paid for an education, and the one thing I knew and how to give is I'm going to give them an education.

How did you decide to start speaking out about this?

I was subpoenaed three different times, three different states. Eric Schneiderman, the attorney general's office had subpoenaed me, and basically I didn't know what to do. I was frantic. I started my new career over, teaching real estate again at another school, and I got scared about it and they got me an attorney.

One night my Aunt Debbie calls me up from Florida and said, “Steve, I don't understand this. They're calling everybody inside a bunch of con men who don't know anything about real estate. They even referred on a CNN report that they were hamburger flippers.”

From that point on that night, I took vigorous notes throughout the whole entire process, and that's how the book came about.

I write about Michael Cohen — I call him a pitbull — how he attacked me and accused me of stealing money and how he screamed and yelled at me.

Accused me of it, basically. Then belittled me by saying you'll never "eff" your spouse again.

My spouse had died of cancer and I was fighting for my life. I was raising two daughters on my own as a single dad and burying my spouse.

For him to belittle me and to treat me like that, and then to have Donald Trump come on speakerphone and never apologize or anything, and they basically destroyed my career. Because after that, who wants to hire somebody who's linked to all these subpoenas and questions?

I still buy, fix and flip homes. I mean, that's what I do, and that's what I love to do, and they are never going to squash that, even though I can probably never work for corporate America again.

With respect to Trump and Trump University, he really believed that the company was a university and that somehow it deserved the same status as Harvard. In Donald Trump's mind, in the Donald Trump world, if you were involved in something in the definition, it has to be great.

If Donald Trump accepted something as true and great, then it had to be true for all the people around him, and all the people in this business. If you didn't see it his way, you are a loser or even a dangerous enemy, and he had to validate his wild aspirations.

When you started, it seems like you admired Donald Trump, but what would you say about him now as a man, having been through all this?

He’s less of a man, probably I would say. I don't want to insult. I don't want to stoop to his level and insult his character, so I take that back. Actually, I apologize. But anyway, it's just his business persona and the way he comes across. It's just not there.

I personally think that he's ethically and morally bankrupt and all. I did admire him in the beginning. That is true, but now that I look at him, especially when in our country and all the chaos and everything that's going on, I don't admire him at all anymore.

I just look for the day I wake up either he's impeached or gone or the day he's no longer re-elected. That would be the best insult to his ego, [making him] a one-term president.

How would you recommend to people to avoid getting taken by a grift like this, a con job like this? How should people protect themselves?

That's a very good question because a lot of students to this day fall for the same type of programs that Trump University offers.

You have to really look at the reality of the whole process. And when somebody asks you to pay you $35,000 or something like that, look for the other people out there. There's people that have passion in real estate that can teach you it and it will be a hell of a lot cheaper. Do your due diligence, watch out. Don't fall for the sales pitch.