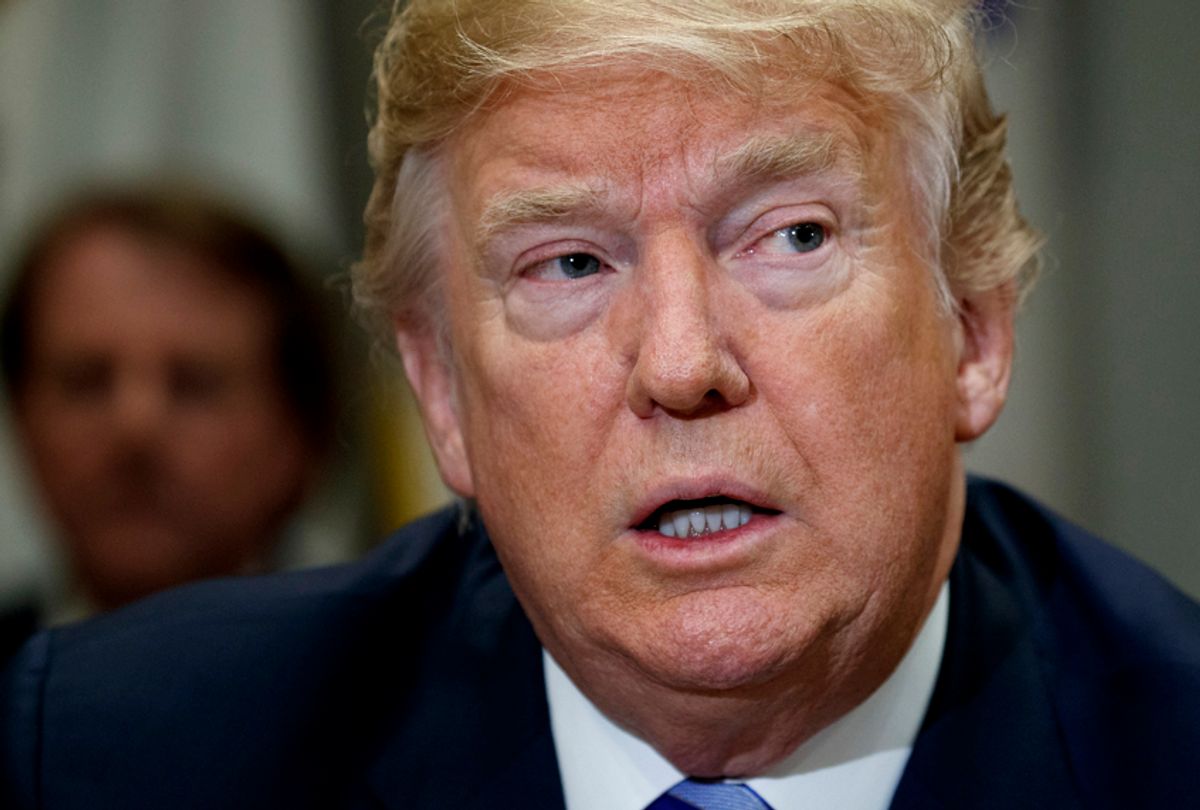 On Wednesday, President Donald Trump spent a meeting at Federal Emergency Management Agency (FEMA) headquarters discussing a number of varying subjects — except the main subject he was there to discuss: hurricane season preparedness.

Details about what Trump discussed instead at the meeting were recorded in audio obtained by The Washington Post, which included this paragraph that summarized the details:

But President Trump had a lot else on his mind, turning the closed-door discussion into soliloquies on his prowess in negotiating airplane deals, his popularity, the effectiveness of his political endorsements, the Republican Party’s fortunes, the vagaries of Defense Department purchasing guidelines, his dislike of magnetized launch equipment on aircraft carriers, his unending love of coal and his breezy optimism about his planned Singapore summit with North Korean leader Kim Jong Un.

The Post piece included a number of quotes from the meeting, very few of which discussed either the ongoing humanitarian crisis in Puerto Rico or how to handle future hurricanes. Instead, they showed him at one point talking about his upcoming summit with North Korean Supreme Leader Kim Jong Un, telling the attendees that "it’s an interesting journey. It’s called the land of the unknown — who knows? We’ll maybe make a deal. Maybe not. As I say to everybody, are you going to make a deal? Maybe and maybe not. Who knows?"

Trump also bragged about what he perceives as his political successes, including his economic performance and the quality of the individuals he has selected for his Cabinet.

"We’re setting records like we’ve never seen before. Whether it’s the employment records I went over, whether it’s the number of companies pouring into the country. We have a tremendous number of companies coming back. Nobody had any idea this was going to happen. I did. . . . Things are happening that they’ve never seen before," Trump says in the recording.

There was one member of the cabinet who Trump pointedly avoided praising. The long list of names that Trump singled out for praise — with the extent of his praise ranging from 36 words (O'Rourke) to 185 words (Mulvaney) — is all the more notable because Trump only offered 11 words of praise for Attorney General Jeff Sessions.

"Attorney General Jeff Sessions. Thank you, Jeff. Thank you very much," is all Trump offered Sessions, the first GOP senator to endorse his presidential campaign.

Although Trump and Sessions had a close friendship during the 2016 presidential election, that relationship was destroyed after Sessions decided to recuse himself from the ongoing investigation into the Trump campaign's alleged collusion with the Russian government. Trump has subsequently blamed Sessions for the appointment of Special Counsel Robert Mueller as well as his ongoing legal problems in general.

Trump's comments on North Korea, the economy and his Cabinet weren't the only matters he discussed during the meeting. He also brought up the Republican Party's political fortunes, trying to shine a positive light on their prospects and taking credit for the success of one gubernatorial candidate.

He also singled out John Cox, the Republican nominee in California's upcoming gubernatorial election, as someone who benefited from Trump's support.

"I endorsed him. He really has been a very good candidate. I watched him last night . . . We won every seat that I endorsed. The ones we didn’t give, they didn’t do too well, as you probably know," Trump told the attendees.

Trump also bragged about his prowess in saving the government money. This included claiming that "we saved $1.6 billion on Air Force One. Can you believe it? I got involved in the negotiations. The press refuses to report that, but that’s okay. . . . People were really surprised." On another occasion, he argued that "I got involved with Boeing and was able to cut down the F-18 by millions of dollars."

He added, "Part of it is, they want to have all new. Instead of having the system that throws the aircraft off the [ship], which was always steam. They now have magnets. They’re using magnets instead of steam. . . . They spent hundreds of millions of dollars, I’m hearing not great things about it. It’s frankly ridiculous."

The president closed the meeting by making a brief reference to the government's responsibility to offer help throughout the world during periods of natural disaster.

"This is really the great model that we’ve built, and there’s no better model anywhere in the world. And we do help other countries, also, when there’s catastrophic events, like in Mexico and other places," Trump said. "We’re always there. We’re always there for them."

Trump also only mentioned Puerto Rico once by name, when he had the following remarks:

Families in Texas and Louisiana, the U.S. Virgin Islands, Puerto Rico, Florida, South Carolina, Georgia, Alabama, Mississippi — they were all affected.  Hard to believe.  And on tribal lands, where the hit was catastrophic, and the storms were really historic in their severity.

Despite Trump's lack of focus on the crisis in Puerto Rico, it remains one of the major humanitarian catastrophes of his presidency. A recent study estimates that at least 4,645 Puerto Ricans died due to Hurricane Maria, significantly higher than the 16 figure projected by Trump last year. Trump has also been criticized for expressing an unwillingness to help Puerto Rico, engaging in publicity stunts such as throwing paper towels to Puerto Ricans impacted by the hurricane and only temporarily waiving a 1920 law that has limited the ability of American vessels to come to Puerto Rico's aid.

A look at the racial prejudice that fuels America's indifference to Puerto Rico.