Polarization is worsening as Trump attempts to delegitimize the American system. Are we headed toward a war? 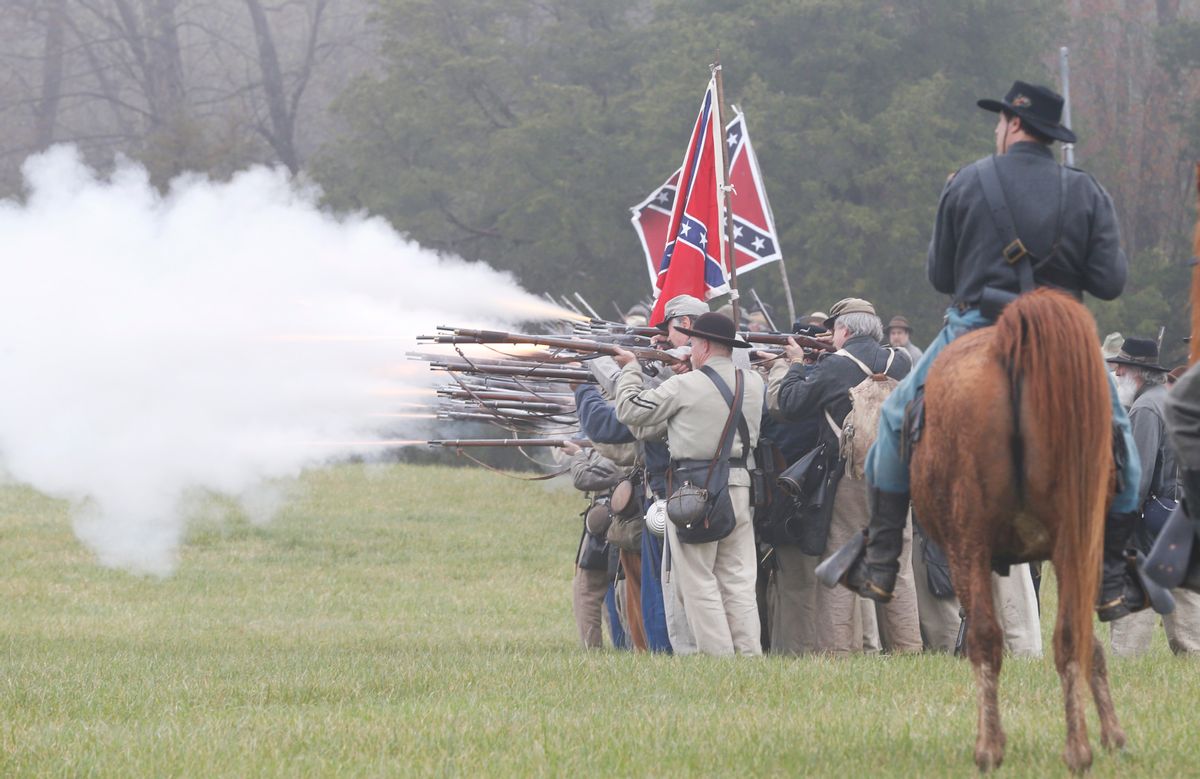 Confederate troops fire muskets at Union troops during a re-enactment of the Battle of Appomattox Courthouse as part of the commemoration of the 150th anniversary of the surrender of the Army of Northern Virginia at Appomattox Court House in Appomattox, Va., Thursday, April 9, 2015. The battle was the final battle of the army of Confederate General Robert E. Lee before his surrender to Union troops. (AP Photo/Steve Helber) (AP)
--

Imagine that an impeachment resolution against Trump passes the House. Trump claims it’s the work of the “deep state.” Fox News’s Sean Hannity demands every honest patriot take to the streets. Rightwing social media call for war. As insurrection spreads, Trump commands the armed forces to side with the “patriots.”

Or it’s November 2020 and Trump has lost the election. He charges voter fraud, claiming that the “deep state” organized tens of millions of illegal immigrants to vote against him, and says he has an obligation not to step down. Demonstrations and riots ensue. Trump commands the armed forces to put them down.

If these sound far-fetched, consider Trump’s torrent of lies, his admiration for foreign dictators, his off-hand jokes about being “president for life” (Xi Xinping “was able to do that,” he told admirers in March. “I think it’s great. Maybe we’ll give that a shot some day.’), and his increasing invocation of a “deep state” plot against him.

The United States is premised on an agreement about how to deal with our disagreements. It’s called the Constitution. We trust our system of government enough that we abide by its outcomes even though we may disagree with them. Only once in our history – in 1861 – did enough of us distrust the system so much we succumbed to civil war.

But what happens if a president claims our system is no longer trustworthy?

Trump’s immediate goal is to discredit Robert Mueller’s investigation. But his strategy appears to go beyond that. In tweets and on Fox News, Trump’s overall mission is repeatedly described as a “war on the deep state.”

In his 2013 novel “A Delicate Truth,” John le Carré describes the “deep state” as a moneyed élite — “non-governmental insiders from banking, industry, and commerce” who rule in secret.

America already may be close to that sort of deep state. As Princeton professor Martin Gilens and Professor Benjamin Page of Northwestern University found after analyzing 1,799 policy issues that came before Congress, “the preferences of the average American appear to have only a miniscule, near-zero, statistically non-significant impact upon public policy.”

Instead, Gilens and Page concluded, lawmakers respond to the policy demands of wealthy individuals and moneyed business interests.

Gilens’ and Page’s data come from the period 1981 to 2002, before the Supreme Court opened the floodgates to big money in its “Citizens United” decision. It’s likely to be far worse now.

So when Trump says the political system is “rigged,” he’s not far off the mark. Bernie Sanders said the same thing.

A Monmouth Poll released in March found that a bipartisan majority of Americans already believes that an unelected “deep state” is manipulating national policy.

In the real world, they’re supposed to be truth-tellers. In Trump’s conspiracy fantasy they’re out to get him – in cahoots with former members of the Obama administration, liberals, and Democrats.

Nor has he shown any interest in unifying the nation, or speaking to the nation as a whole. Instead, he periodically throws red meat to his overwhelmingly white, rural, and older base.

And he has repeatedly shown he couldn’t care less about the Constitution.

So what happens if Trump is about to be removed — by impeachment or even an election?

In early April, Sean Hannity predicted that if impeachment began, “there’s going to be two sides of this that are fighting and dividing this country at a level we’ve never seen” — “those that stand for truth and those that literally buy into the corrupt deep state attacks against a duly elected president.”

Last summer, Trump consigliore Roger Stone warned of “an insurrection like you’ve never seen,” and claimed any politician who voted to oust Trump “would be endangering their own life.”

A second civil war? Probably not. But the way Trump and his defenders are behaving, it’s not absurd to imagine serious social unrest. That’s how low he’s taken us.