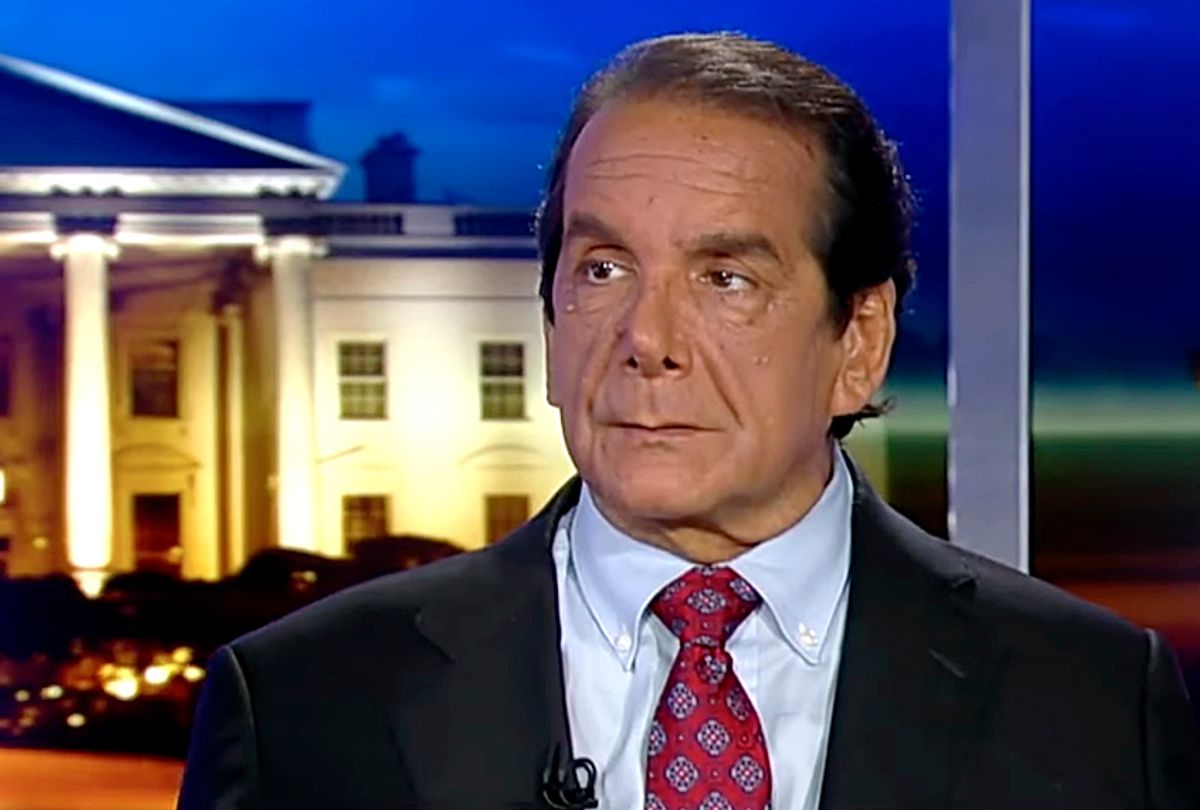 It is unlikely that Charles Krauthammer, the erudite and tart neoconservative columnist whose words regularly appear in The Washington Post and whose face is often one of the Fox News talking heads, wants people to make too much of a big deal about his terminal cancer diagnosis. Yet if you follow the more intellectual strains of American politics — whether as a liberal, a conservative, a libertarian or something out-of-the-box altogether — you have almost certainly run into his work and will just as likely be affected by the news.

"I have been uncharacteristically silent these past ten months," Krauthammer wrote in The Washington Post on Friday, referencing the hiatus from public life that began for him in August. "I had thought that silence would soon be coming to an end, but I’m afraid I must tell you now that fate has decided on a different course for me."

He goes on to explain how his health situation has taken an unexpected, and serious, turn for the worse:

In August of last year, I underwent surgery to remove a cancerous tumor in my abdomen. That operation was thought to have been a success, but it caused a cascade of secondary complications — which I have been fighting in hospital ever since. It was a long and hard fight with many setbacks, but I was steadily, if slowly, overcoming each obstacle along the way and gradually making my way back to health.

However, recent tests have revealed that the cancer has returned. There was no sign of it as recently as a month ago, which means it is aggressive and spreading rapidly. My doctors tell me their best estimate is that I have only a few weeks left to live. This is the final verdict. My fight is over.

Krauthammer's matter-of-fact tone regarding his own mortality was foreshadowed early in his career, when he opened up to The Washington Post in 1984 about a diving injury from his medical school days that left him a paraplegic.

That was the one thing that bothered me very early on. The first week, I thought, the terrible thing is that people are going to judge me now by a different standard. If I can just muddle through life, they'll say it was a great achievement, given this.

In the intervening years, Krauthammer has established himself as the archetypal neoconservative — that is, the kind of conservative who started out as a liberal in the 1970s, slowly gravitated toward the Republican Party in the 1980s and 1990s due to the clash between their left-wing social views and their right-wing foreign policy views and by the 2000s were full-bore members of the Grand Old Party.

Yet despite his status as an erstwhile-liberal-turned-conservative, Krauthammer is still known for his independent streak. Defending then-vice presidential candidate Sarah Palin's answer to a question about the Bush Doctrine, Krauthammer wrote:

This declaration of a sweeping, universal American freedom agenda was consciously meant to echo John Kennedy's pledge in his inaugural address that the United States "shall pay any price, bear any burden, meet any hardship, support any friend, oppose any foe, in order to assure the survival and the success of liberty." It draws also from the Truman doctrine of March 1947 and from Wilson's 14 points.

If I were in any public foreign policy debate today, and my adversary were to raise the Bush doctrine, both I and the audience would assume -- unless my interlocutor annotated the reference otherwise -- that he was speaking about the grandly proclaimed (and widely attacked) freedom agenda of the Bush administration.

Explaining why he is a skeptic about man-made global warming, he said:

During the 2016 presidential election, he offered this defense of Bill Clinton's controversial 1994 crime bill:

You know Bill Clinton still believes his crime bill was justified. One cannot definitively prove causality, but it certainly contributed to one of the most radical declines in crime ever recorded in this country.

Moreover, the Black Lives Matter charge that the 1994 law was an inherently racist engine for the mass incarceration of young black men is belied by the fact that it was supported by two-thirds of the Congressional Black Caucus (including civil rights pioneer James Clyburn, D-S.C.), justly panicked at the time by the carnage wrought by the crack epidemic ravaging the inner cities.

And of Hillary Clinton's leaked emails, he said:

The soullessness of this campaign — all ambition and entitlement — emerges almost poignantly in the emails, especially when aides keep asking what the campaign is about. In one largely overlooked passage, Clinton complains that her speechwriters have not given her any overall theme or rationale. Isn’t that the candidate’s job? Asked one of her aides, Joel Benenson: “Do we have any sense from her what she believes or wants her core message to be?”

Despite his antipathy for Clinton, however, he could not vote for Donald Trump:

I didn’t need the Wiki files to oppose Hillary Clinton. As a conservative, I have long disagreed with her worldview and the policies that flow from it. As for character, I have watched her long enough to find her deeply flawed, to the point of unfitness. But for those heretofore unpersuaded, the recent disclosures should close the case.

A case so strong that, against any of a dozen possible GOP candidates, voting for her opponent would be a no-brainer. Against Donald Trump, however, it’s a dilemma. I will not vote for Hillary Clinton. But, as I’ve explained in these columns, I could never vote for Donald Trump.

Finally, on allegations of collusion between Trump's presidential campaign and Russia, Krauthammer concluded:

Once you’ve said “I’m in,” it makes no difference that the meeting was a bust, that the intermediary brought no such goods. What matters is what Donald Jr. thought going into the meeting, as well as Jared Kushner and then-campaign manager Paul Manafort, who were forwarded the correspondence, invited to the meeting, and attended.

“It was literally just a wasted 20 minutes, which was a shame,” Donald Jr. told Sean Hannity. A shame? On the contrary, a stroke of luck. Had the lawyer real stuff to deliver, Donald Jr. and the others would be in far deeper legal trouble. It turned out to be incompetent collusion, amateur collusion, comically failed collusion. That does not erase the fact that three top Trump campaign officials were ready to play.

It may turn out that they did later collaborate more fruitfully. We don’t know. But even if nothing else is found, the evidence is damning.