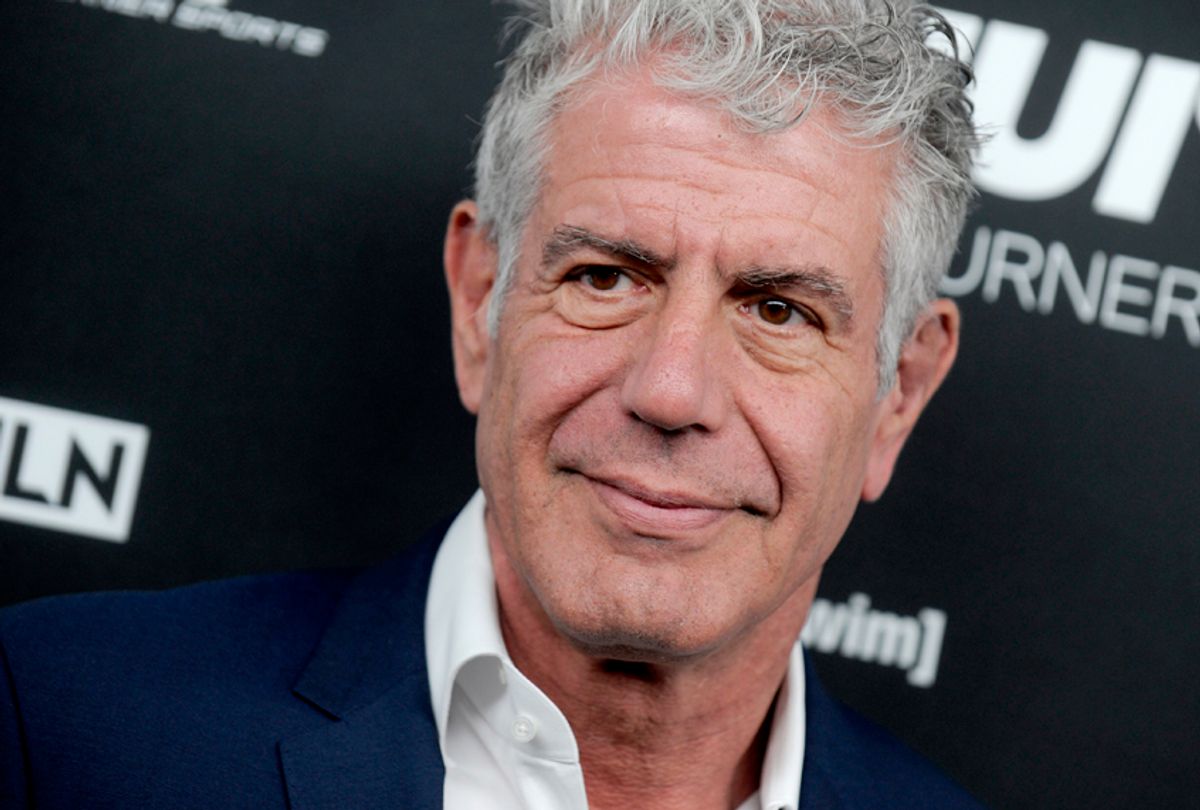 The acclaimed chef, author and TV star died of an apparent suicide on Friday. He was 61.

Within minutes of the news breaking, Bourdain's peers and celebrities took to social media to mourn the American chef's loss – and honor his legacy.

"Anthony. One of my idols. Unapologetic, passionate and one of the best storytellers on the planet," tweeted Chrissy Teigen. "Thank you for making food so exciting. And always standing up for everything right. Horrible. Why why why. Be at peace now."

British chef Gordon Ramsay tweeted that he was "stunned and saddened" by Bourdain's passing.

"He brought the world into our homes and inspired so many people to explore cultures and cities through their food," Ramsay tweeted, before reminding everyone to "remember that help is a phone call away."

"I have to say I'm in total shock to hear that the amazing Anthony Bourdain has just died," Jamie Oliver wrote on Instagram. "He really broke the mould, pushed the culinary conversation and was the most brilliant writer….he leaves chefs and fans around the world with a massive foodie hole that simply can't be replaced…..rest in peace chef. Thoughts and love to all his family and close friends."

Actress Stephanie March remembered Bourdain as "a deeply decent and talented person is no longer with us."

"He called Africa the cradle of civilization, took his cameras to Haiti, honored the hood with Snoop, broke bread with Obama like a human being," Twitty tweeted. "Black folks loved this man because he didn't appropriate, when it came to us all he could do was celebrate. He told the world we were the center of Southern&Brazilian food and he let us speak for ourselves."

"Anthony Bourdain did not exploit race or religion or other human conflicts," Twitty added. "Rather he illuminated how food played a role in the deep passions behind those conflicts and challenged us to not see bad or good but human."

"No. No. No. NO. I just can’t begin to understand this," wrote actor Josh Gad on Instagram. "Goodbye to another great gone far too soon. Please please please remember that if you are or anyone you know is struggling and needs help, you are not alone. Reach out for help at the National Suicide Prevention Hotline at ‭1 (800) 273-8255‬. RIP legend."

NBC host Megyn Kelly tweeted, "Incredibly sad news about Anthony Bourdain. Sending such love to his family, including his CNN family, who must be hurting terribly today."

"Anthony Bourdain lived in a way that most of us should," tweeted actress Lucy Hale. "A seeker of the unknown & a man who exposed magnificent parts of the world to us through our TVs. I don’t even know what to say, this makes me so damn sad. I truly loved him & what he stood for."

Comedian and actor Patton Oswalt tweeted the number for the national suicide hotline, writing, "I've brushed up against this darkness and I know it's a tempting exit but REACH OUT to ANYONE. Stay on this side of it — in the light and warmth. Where you get to try again, every day."

Chef Dominique Ansel honored Bourdain on Instagram, writing, "A chef's chef, a brilliant storyteller, and an incredible mind who opened up the entire world to us through food and the people he met along the way. RIP Anthony Bourdain, you will be missed."

The rock star chef and host of CNN's "Anthony Bourdain: Parts Unknown" was found dead in an apparent suicide in his hotel room in France on Friday morning by close friend and French chef, Eric Ripert, according to CNN. Both were filming an upcoming episode of Bourdain's award-winning show.

"It is with extraordinary sadness we can confirm the death of our friend and colleague, Anthony Bourdain," the network said in a statement Friday morning. "His love of great adventure, new friends, fine food and drink and the remarkable stories of the world made him a unique storyteller. His talents never ceased to amaze us and we will miss him very much. Our thoughts and prayers are with his daughter and family at this incredibly difficult time."

If you or someone you know is considering suicide and self-harm, please call 1-800-273-TALK (8255) for the National Suicide Prevention Lifeline or text HOME to 741-741 for free, 24-hour support from the Crisis Text Line.