"Queer Eye" and the view from here 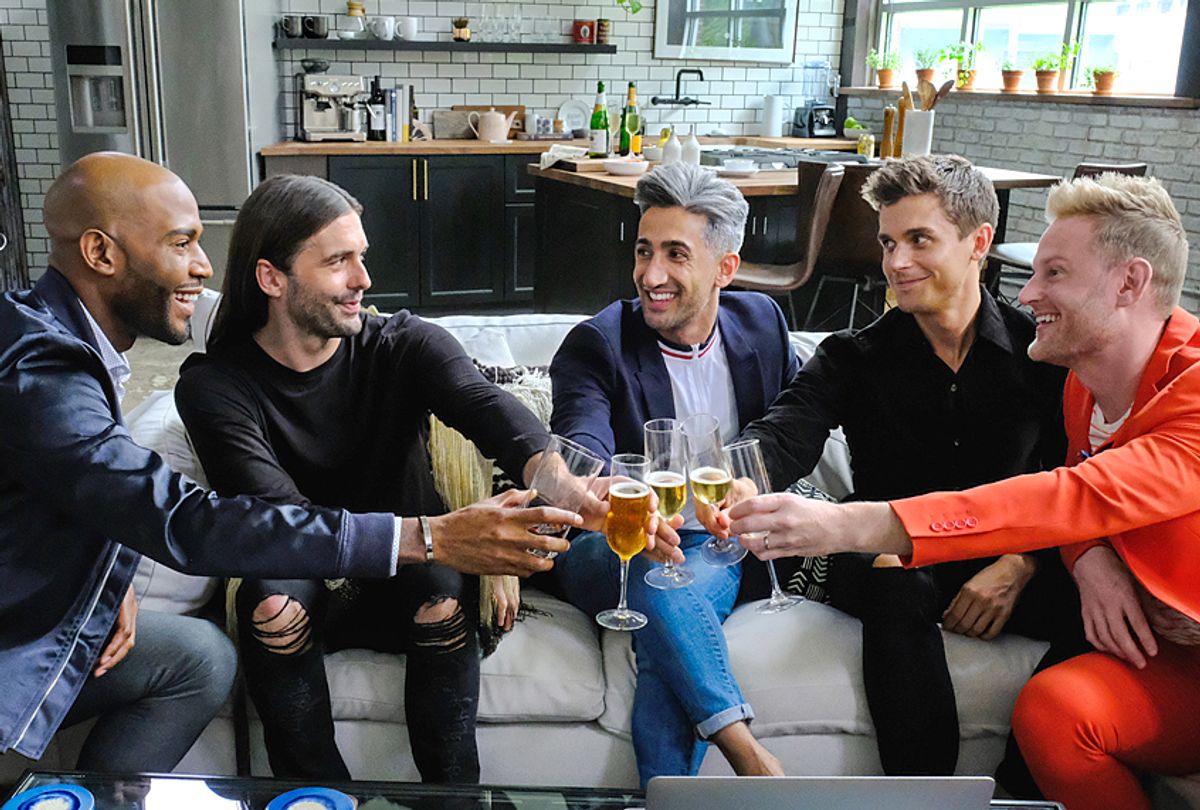 Arriving to Netflix’s revival of “Queer Eye” without being predisposed to detest it was tough for me. The original Fab Five — Thom Filicia, Jai Rodriguez, Kyan Douglas, Ted Allen and Carson Kressley — holds a special place of those of us who were addicted to the 2003 series, especially those of us who identify somewhat regretfully as sloppy AF.

Remember, this is before Food Network hypnotized millions into becoming foodies, and the Nate Berkus term “house proud” became a . . . thing.  Many adults of the aughts generally lacked schooling in aesthetics, and this is where “Queer Eye for the Straight Guy” (and its TLC cousins “What Not to Wear” and “Trading Spaces) stepped in.

The Fab Five stylized their mission to make its image overhauls into a treat as well as a feat. Their quarry, guy slobs, are a lot generally left to their own hopelessness. But in the space of what the magic of production made look like a day, these men would be magically transformed from sasquatches to groomed gentlemen possessing skills such as knowing how to properly cook a steak or apply hair product.

Within the eight episodes of the “Queer Eye” reboot — it’s just “Queer Eye” now, for good reason — a new generation learns similar techniques for better living from a fresh team of gurus tailored to appeal to millennials while consciously and respectfully inviting in the previous series’ audience.

The 2003 series was a cheeky sparkle on Bravo’s schedule, a charming and consciously upbeat counterpoint to a political era in which LGBTQ Americas still struggled for social tolerance and legal standing.  Gay marriage had yet to be legalized and when the original debuted, “The Ellen Show” was not yet a daytime staple.

Plus, the original Fab Five were unknown to the larger television audience when their series became a Bravo hit. The modern crew, meanwhile, steps into a famous title with established brands of their own. Two of the new Fab Five are already familiar to a number of viewers: Karamo Brown, the team’s culture expert, made history as reality television’s the first out gay black man when he appeared on the Philadelphia edition of MTV’s “The Real World” in 2004. Grooming expert Jonathan Van Ness made a name for himself as the star of the Funny or Die recap series “Gay of Thrones.”

Bobby Berk, responsible for bringing his home makeover expertise to the series, has an established interior design company and furniture line, has appeared as an expert on network television as well as on Bravo and HGTV.

Of the remaining two, fashion expert Tan France won his slot on the team due to his social media presence, and culinary honcho Antoni Porowski was recommended by Allen, host of the Food Network series “Chopped.”

This means a lot of people tuning in to the new “Queer Eye,” which began streaming this week, are bound to carry some expectations with them. And this makes its success all the sweeter.

“Queer Eye” isn’t flawless. For instance, the opener of the series feels too earnest, consciously polished and starched. Each of the men introduce themselves and France neatly explains its 2018 directive. The original show, France says, was a fight for tolerance. The battle this time is for acceptance.

Activating that premise the show’s move from the liberal enclave of New York City to Georgia, where the guys make their home base in Atlanta and meet a few of their makeover subjects in territories that are decidedly red state. One of them, in fact, has a “Make America Great Again” cap buried in his haphazardly stocked closet, earning a pause but moved aside with lighthearted laughter. Anyone watching can see the team’s main work with this gentleman isn’t on his politics but his style issues.

And in some respects, this is how the new “Queer Eye” circumvents some of the pitfalls of resurrecting a Bush-era reality series that has a specific tone and a format that’s been imitated and rejiggered a number of times during the 15 years that have passed since the original graced the airwaves.

Executive producers David Collins and Michael Williams, part of the first show’s producing team, display an awareness of this by emphasizing lightheartedness and humor foremost while not shying away from the difficult realities of faced by gay men and people of color right now.

At the risk of tossing a bit of shade at the series, though, one element “Queer Eye” doesn’t truly acknowledge is that time has altered the concept of what “queer” means and who the term embraces. The first “Queer Eye” pre-dates many social leaps forward for the LGTBQ population, whose impact on culture extends across television. Notably it joins the series landscape in the wake of “Transparent” and RuPaul’s rise and conquest of the medium, and the subsequent mainstreaming of discussions about gender and sexual identity. A long way of saying, since this is a show loved by men and women alike, I can’t think of a reason that the show wouldn’t have included at least one female or trans expert.

In the food expert field alone, there’s transgender Chris Trapani, featured on “Chopped.” Karen Akunowicz claimed her territory as a queer fierce femme on “Top Chef,” a series has boasted a number of gay and lesbian contestant, and an out winner in season 10’s Kristen Kish. Again, this is just one casting element the producers could have tweaked to root the series in 2018 even more prominently.

Presumably the response to why this didn’t happen is because “Queer Eye” has an established formula that works and dictates that the point is to show men who tend to struggle with concepts of masculinity that don’t fit a heteronormative paradigm embracing advice and encouragement from men who are proudly and unapologetically gay. Is this a completely defensible reason? No. But here we are.

The latest “Queer Eye” does take extraordinary steps that the previous version did not, such as an episode in which the Fab Five guide a gay black man into coming out to his parent, one story we don’t see enough of on television. This episode (and others) open the emotional floodgates, but it earns our tears fair and square. The benefit of viewing these makeovers take place over the course of days, as opposed to the illusion of hours, is that the new Fab Five connects their subject’s sartorial and design overhaul to some unaddressed need of the spirit in ways the first series could only touch upon. (Another lesson taught by numerous reality shows, including “Hoarders”: a disordered environment typically is the result of a disordered soul.)

Contrivance is a standard element of any reality production, but Netflix’s “Queer Eye” manifests and utilizes it in interesting ways. One episode interrupts the band’s merry road trip with a police officer pulling over The Fab Five; naturally Brown is at the wheel, although France, who is British born and half-Pakistani, nervously jokes that the cop must have seen him.

The fact that this moment made it into the series tips its hand to the viewer that everything turns out OK, but in that moment, a terrified Brown certainly doesn’t appear to know what’s going on. But this interaction later instigates a conversation between the episode’s makeover subject, a cop, and Brown about the fear black men have of law enforcement and the frustration that by-the-book officers feel at being tarred by the corrupt cops whose actions make headlines.

And some of the most touching moments aren’t planned, such as an exchange between an older, lonely hermit with a ZZ Top beard who obviously loving being with the Fab Five and is comfortable enough to ask Berk, as he discusses his marriage, which partner is the “wife” and which is the “husband. Rather than scolding their subject, Berk and Van Ness, who happens to be with them, gently correct the man’s uninformed concept of homosexual relationships.

These moments fuel the new “Queer Eye” in a meaningful manner, sparking conversations about acceptance that are predicated upon the ways we’re all alike as opposed to the qualities that make us different. We can’t get to know each other without helping one see our shared obstacles and prevent future stumbles.