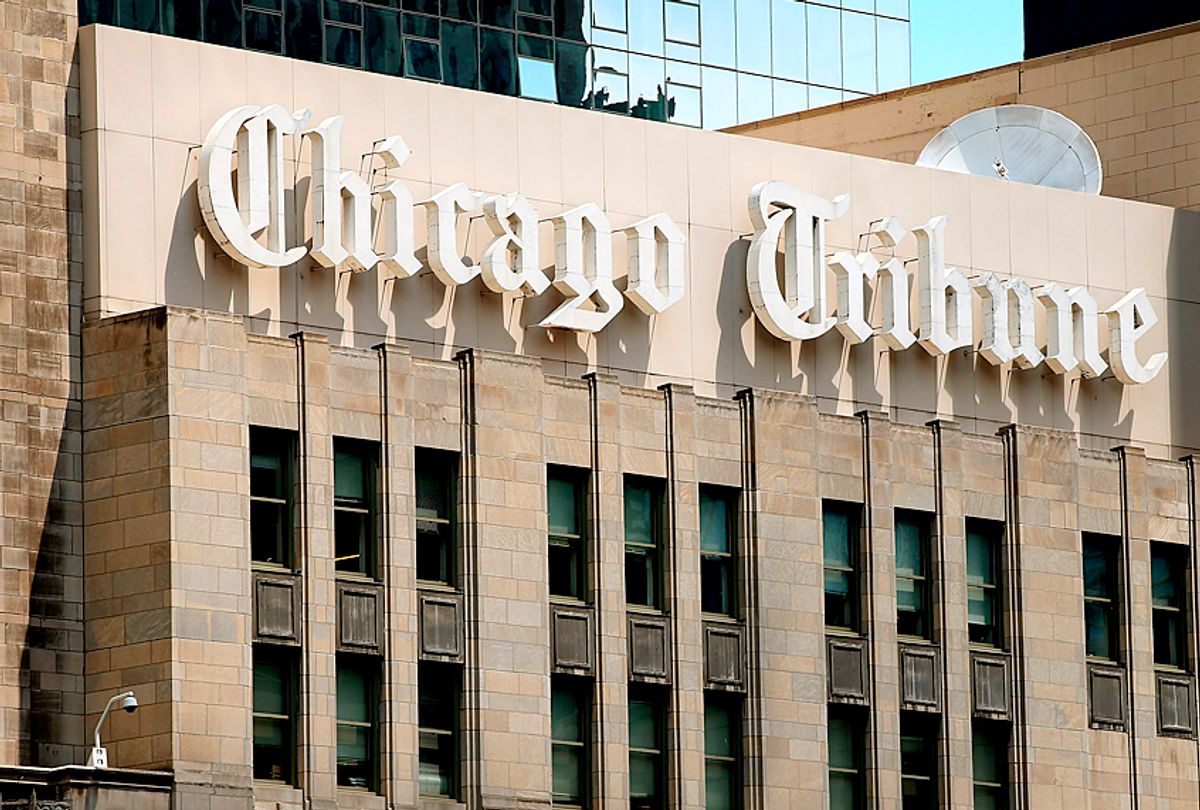 On May 7, glasses clanked and cheers echoed across a downtown Chicago bar as journalists openly celebrated what would have been a whispered fantasy just a few short months ago. The Chicago Tribune, the mother of all major anti-union newspapers — both in its editorial philosophy and newsroom policy — had just bowed to its employees’ desire to form a union.

Mary Wisniewski, sidling up to a table, beamed broadly as she recalled receiving a colleague’s phone call a day before informing her that the company had relented and agreed to recognize the NewsGuild.

“I was so happy. I did a little dance and took a shot of vodka. Polish, of course,” chuckled Wisniewski, a veteran journalist and member of the organizing committee that had worked for months in virtual submarine silence while gathering support.

In April, union organizers won a stunning 85 percent support from potential bargaining unit members. While contract talks have yet to begin, union officials say they will likely to focus on the issues raised in the organizing drive: job security, controlling health care premiums, pay equity and building a diverse newsroom that reflects the community.

The journalists’ jubilation is shared by the two unions that in recent years have been signing up members in the print and digital media industry in droves. “I compare it to what it must have been like in the early 30s’ when the Guild was founded,” said Bernie Lunzer, president of the NewsGuild.

High publicity victories at nameplate publications like the Chicago Tribune and the Los Angeles Times — another long-time rock of anti-union fervor — have helped replenish the NewsGuild’s ranks, which have fallen to about 25,000, down from a high water mark of 34,000 in the late 1980s.

Lowell Peterson, executive director of the Writers Guild of America East (WGAE) and an attorney with nearly 30 years of union experience, marvels at “the palpable sense of movement” among workers. Over 1,200 digital media workers have joined the nearly 5,000-member WGAE over the last three years, a stark rise of unionization for the industry.

So, what accounts for this rapid growth in unionization? Have news unions minted a new organizing elixir?

Not exactly. Rather, media workers have shown a newfound willingness to fight for their rights on the job, and as more and more newsrooms have successfully organized, other journalists have been motivated to unionize their own workplaces. At the Chicago Tribune, for example, journalists say the organizing victory a few months earlier at the Los Angeles Times helped ignite their own effort.

There are also modern-day realities about organizing these workers. For example, much of what drives the organizing among digital media workers is how connected media workers are and how regularly they communicate, according to Megan McRobert, an organizer for the WGAE. “I’ll get a call from somebody who will say my friend is with Fusion and so can we talk.” A former organizer for the SEIU, she recalls in the past waiting for hours in hospital cafeterias to meet potential members.

Not so long ago it was also thought that digital journalists were loath to join unions because their youth makes them unconcerned about long-term careers, or because they flit from one site to another, or because unions are just not in their cultural DNA.

Four months after the union signed a contract with HuffPost, however, Bellware lost her job as part of a wave of layoffs. That didn’t change her feelings about the union, however. The cutback was long expected, she said, and the union significantly helped smooth out her layoff. “It was more generous than anything I had ever heard of except an executive getting a golden parachute. I’ve been laid off before and never received salary and benefits,” said Bellware, who still belongs to the union.

Another driving force for the rise in media unionizing has been the disparate directions taken by print and digital news media outlets.

While print journalism is vanishing like so many puddles in the sun, digital news operations are plugged in and exploding. Overall employment in the newspaper industry has plummeted from 455,000 jobs in 1990 to 183,000 in 2016, federal figures show. Over the same time period, internet publishing and broadcasting jobs have leaped from 28,800 to 197,800.

These declines have wrought dire consequences for print reporters.

Newsroom staffing is down 40 percent over the last decade among newspapers, and as much as 60 to 70 percent among newspapers owned and managed by hedge funds and private equity funds, according to Penelope Muse Abernathy, the Knight Chair of Journalism and Digital Media Economics in the School of Media and Journalism at the University of North Carolina. She recently led a major study of Americannewsrooms.

Five of the 10 largest newspaper chains are owned by investment entities such as hedge funds and private equity funds, she said. And that has changed the landscape for journalists. These new owners rely on “aggressive cost-cutting” and “miserly” wage increases, she added.

Dean Olsen can tell you what it’s like to work in a newsroom full of ghosts. He’s a healthcare reporter at the State Journal Register in Springfield, Ill., a newspaper with roots going back to 1831. Since the NewGuild organized his paper in 2012, the newsroom has shrunk from 33 to 17, leaving only “three to four (news) reporters,” he said.

There has not been a pay raise in 11 years, though the NewsGuild recently negotiatedfor a one percent raise in September and another 1.7 percent increase next year for the 16 GateHouse newspapers it represents. In 2016, Olsen also helped organize two other Gatehouse papers in Florida, the Lakeland Ledger and the Sarasota Herald-Tribune, but they have yet to sign a contract with the company. GateHouse Media publishes 144 daily newspapers and is part of New Media Investment Group.

In recent years, amid hard times at the Chicago Tribune, the NewsGuild had made several passes at organizing but gained little traction. “I made some inquiries. I knocked on a few doors but didn’t get much of a response. There was a lot of ‘not now, it won’t happen here, I’m not going to get involved in anything like this,’” recalled Dave Roeder, a former Chicago Sun-Times business reporter and now a part-time organizer with the NewsGuild.

But the clouds lifted, so to speak, when the Los Angeles Times organizing effort got underway. The Chicago Tribune’s campaign built upon long-term gripes about corporate spending, the lack of raises, layoffs and the failure to fill empty jobs at the paper. “They had a sense of urgency because of the ongoing changes at TRONC (the Tribune’s parent company). People were afraid. They felt that they needed some status quo protections as quickly as they could get them,” he said

At a recent community meeting set up by City Bureau, a fast-growing and innovative grassroots journalism organization in Chicago, several Chicago Tribune workers explained what happened.

Once they got started, secrecy was key, they said, so the company would not be able to keep track of the organizing drive. They categorized workers by their likelihood to embrace a union. But there were “very few who would not talk to us.” In role-playing sessions with the NewsGuild, organizers learned how to pitch the union to colleagues. They set up a Twitter page, discussed media strategy and ultimately reached out to NPR reporter David Folkenflik, thinking that national coverage would help the campaign gain steam.

And they were in a hurry, fearing looming layoffs.

One of the organizing committee’s members was veteran photographer Abel Uribe, who was skeptical of the union at first. “I felt I needed more information, so I went back home and started researching unions,” he recalled. He saw that unions reached settlements that improved conditions and protected workers.

According to Roeder of the NewsGuild, the lack of newsroom diversity and advancement for minorities was a concern raised by organizers, and it prompted workers to make sure their effort was diverse.

It was an issue that has deeply touched Uribe, who has often shared his feelings that he hasn’t been treated the same as others in the newsroom. “I figured as a person of color that I would be one of the first to get let go in a layoff,” he explained.

“We were not just fighting for better pay,” he said, “but for the future of journalism in Chicago.”