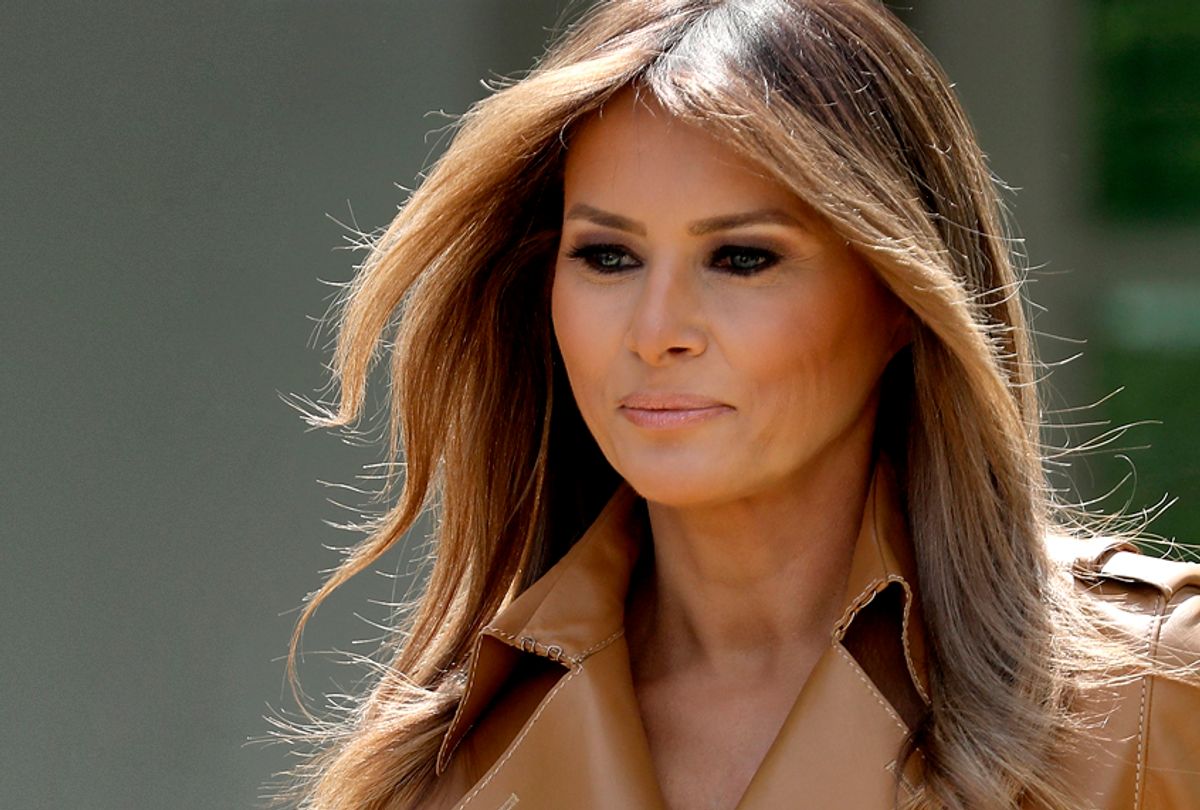 For about a month there, Melania Trump went missing.

The first lady was recovering from a four-hour surgery, according to remarks President Donald Trump made Friday, referring to the procedure Melania underwent on May 14 for what her office characterized as a benign kidney condition. She had been hospitalized for five days after, and had directed her staff to release almost no information on her condition during her recovery. So we’re told.

Melania remained mysteriously out of the public eye for nearly a month, igniting a storm of rumors about her whereabouts and condition. The speculation ran the gamut, from the gossipy — plastic surgery recovery, maybe a presidential divorce brewing — to the dark, with insinuations of possible physical abuse and/or a complete mental breakdown. Melania Watch 2018 slowed on Monday when a grainy photo of her emerged, like a glammed-up Bigfoot spotting, from a private reception for Gold Star families. The rumors came to an end — for now — on Wednesday when she made her first press-covered post-operation appearance at a FEMA meeting on hurricane season, where President Trump called her absence “a little rough patch” but assured attendees that she was “doing great.” If you say so, Donald!

A verbal skirmish between Trump's personal lawyer Rudy Giuliani and the first lady's camp this week over Stormy Daniels' allegations that she and Donald Trump had had an affair showed some, well, tensions in the messaging, though. Giuliani claimed on Wednesday that Melania "believes her husband" and "she knows [the affair allegations are] untrue," but on Thursday, Melania's communications director Stephanie Grisham shut that down with a frosty Mariah-level statement to CNN, claiming, "I don't believe Mrs. Trump has ever discussed her thoughts on anything with Mr. Giuliani."

On Friday, President Trump revealed that Melania hadn’t accompanied him to the G7 summit in Canada because her doctors had advised her not to fly during her recovery — information that the White House had played close to the chest until rumors grew more fanciful: Had Melania pulled a “Gone Girl” and peaced out of the whole operation just to teach Trump a lesson about indiscretions with adult film stars? Would they find her living in an anonymous Hilton down the road from Mar-a-Lago, watching true crime documentaries, experimenting with new hair colors and accents, maybe framing him for murder just for kicks?

Alas, not this time. And so Trump’s no-fly excuse for Melania skipping the G7 summit arrives just in time, throwing the audience — sorry, the American people — an information bone that plausibly explains her absence from his side. It's a canny strategy to manage the Where's Melania narrative in this way, which has tantalized viewers ("constituents") perhaps because it always seems on the verge of unraveling in a spectacular or even ominous manner.

Melania is back now, or back as much as she was ever in, as she seems more reluctant than any first lady in recent memory to assume the full complement of traditional duties of the role. But don’t be surprised if Melania Watches continue to pop up periodically throughout the the Trump presidency, like tornado sirens for the conspiracy-addled public all to willing to believe anything sinister is possible in the psychosexual hellscape that is Donald Trump’s home. The White House didn’t exactly tell the full truth about Melania’s surgery to begin with, which can be interpreted as respect for her extremely private nature or evidence of unchecked and indulgent prevarication, depending on your voter registration. And it is indictment season, so if we didn’t already see conspiracies and cover-ups and collusion in the sesame seed constellations of every bun that passed through the president’s braying Big Mac-hole before, Melania Watch surely didn’t help.

Or hurt, as the case may be. Because as eager as segments of the American public are to believe nutty theories about Melania — last year, it was all about the body double said to be standing in for her at public events — the president too seems quite willing to play along. It’s obvious why he’d see the value in drawing out Melania Watch for as long as possible rather than putting a curt and sensible end to the ghoulish speculation, as any normal president would — as a maestro of the Watch What Happens brand of reality TV, Trump knows you can drag one secret and a semi-significant reveal, however anticlimactic in reality, out for a few tantalizing episodes before delivering the goods.

But it’s also easy to see why America is eager to indulge in Melania conspiracy theories, because they run adjacent to some very old and enduring myths our culture plays out time and again in its narratives about beautiful women in trouble surrounded by possibly malevolent men.

In her 2014 essay “The Oldest Story: Toward a Theory of a Dead Girl Show” for the LA Review of Books — now the opening chapter in her highly anticipated forthcoming essay collection “Dead Girls” (June 26, William Morrow) — Alice Bolin digs into the meaning behind our cultural obsession with stories that revolve around the mystery of a dead woman and the powerful, menacing men around her. “In the Dead Girl Show, the girl body is both a wellspring of and a target for sexual wickedness,” Bolin writes. Melania might have aged out of typical dead-girl age, but her image as docile helpmeet crossed with bikini model temptress can handily recast her into the dependent objectified space usually reserved in these stories for younger women. That the theories about her went dark fast — in hiding after a trauma, perhaps even replaced with a replicant of some kind in a secret plot machinated by the president and his closest cronies — suggest there's an audience for a Melania In Jeopardy narrative that says more about our collective hungers than her reality.

“Father figures and male authorities hold a sinister interest in controlling girl bodies and, therefore, in harming them,” Bolin writes, a description that fits Donald Trump, with his obsessions over women’s bodies, including his wives’ and daughters’, to a T. “In 'True Detective,' the conspiracy goes all the way to the top, involving a US senator and his cousin, a powerful minister.”

We binge these stories on Netflix and podcasts already. Add that to a White House shrouded in so much off-brand intrigue it threatens to catch up to the Underwoods, and then consider the president’s own flair for egging on a narrative he perceives as popular — it’s not entirely clear he sees any difference in his constituents believing his wife was recovering from a vicious physical attack and, say, “Vanderpump Rules” fans speculating about whether Jax would cheat on Brittany before or after the wedding, as long as the result is "high ratings." All signs point to a few more years of Melania appearing and disappearing, like a very stylish ghost, as long as the story keeps us tuning in. We could turn this show off, sure, but what Trumpian trainwreck would we be forced to watch instead?