“Anthony would never have wanted Asia to be hurt," the #MeToo leader wrote in an open letter to her "fellow humans" 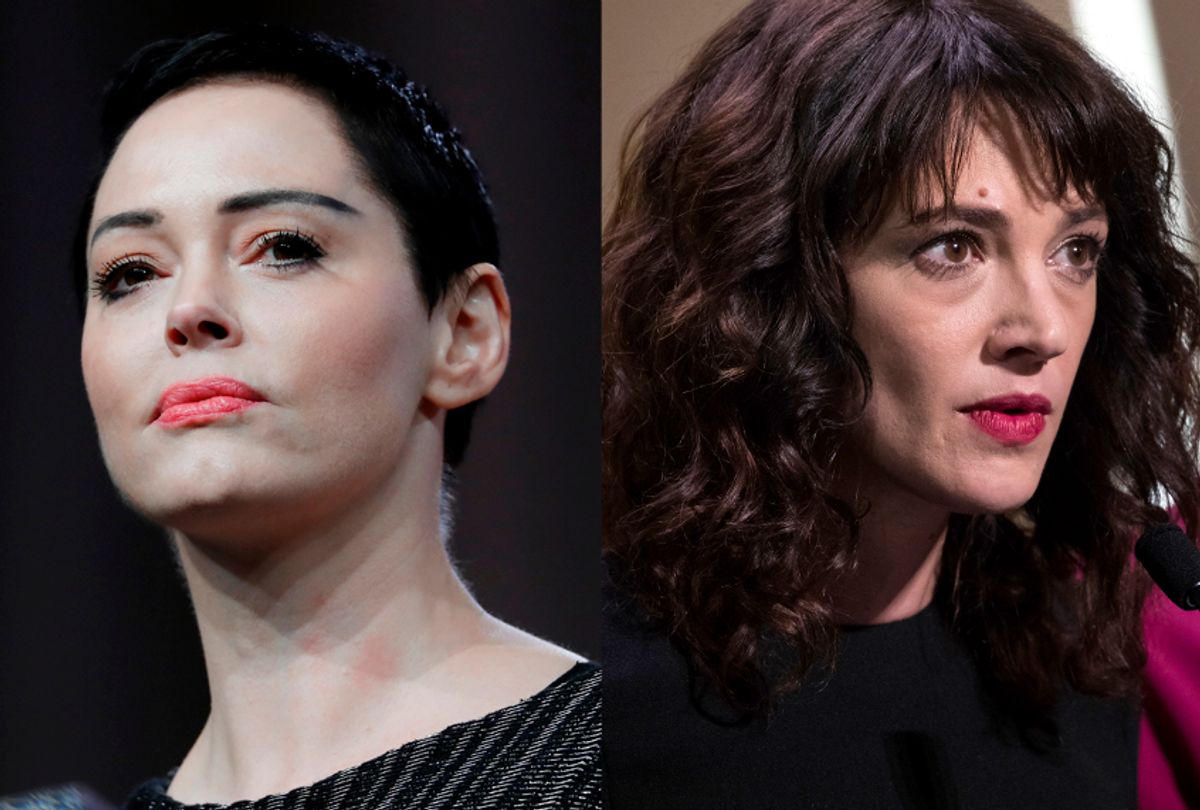 Rose McGowan, the actress and leader of the #MeToo movement, penned an open letter on Monday urging her “fellow humans” not to blame Anthony Bourdain’s girlfriend for his suicide. McGowan is a close friend of Asia Argento.

The letter seemed to reveal more hard-to-swallow circumstances of Bourdain’s suicide, with McGowan claiming that Bourdain sought assistance but “did not take the doctor’s advice” and refused any assistance he was offered.

“Anthony was part of a ‘pull up your bootstraps and march on’ generation. The a ‘strong man doesn’t ask for help’ generation,” McGowan wrote.

In her letter, McGowan chastised the media and “random" commenters who pointed fingers at Argento after photos surfaced of her embracing French journalist Hugo Clement ahead prior to Bourdain's death.

“Anthony would never have wanted Asia to be hurt," McGowan said. "I’d like to think he would want us to have the collective conversation that needs to be had about depression."

McGowan made it clear that blaming Argento is a “sexist thing” to do, and she defended Argento as a “pillar of strength” and a “remarkable human and brave survivor.”

“Blame is NOT a conversation,” McGowan continued. “It is the shutting down of our collective growth, which is where we are now.”

McGowan was not the only voice that come to Argento’s defense. Numerous other celebrities expressed support on Twitter, including actress Mira Sorvino, who directly addressed Argento with compassion. All three women came out against Harvey Weinstein, the embattled former Hollywood titan who was recently arrested on rape charges.

“No one has any right to ever lay blame at your feet for this!” Sorvino tweeted.

Director Audrey Ewell also publicized her condemnation, saying that “blaming Asia Argento for the tragedy of Bourdain’s suicide is unacceptable and terrible.”

Argento posted a cryptic selfie to her Instagram account hours before Bourdain’s body was found – donning a T-shirt with the words “F**K EVERYONE” and the caption, “You know who you are.”

Speculation that she had played a part in Bourdain's decision to end his life and accusations that she "should not have stepped out with Hugo Clement” dogged Argento, who recently alleged she was raped by Weinstein while attending the Cannes Film Festival in 1997. The finger pointing seemingly prompted McGowan to pen her open letter.

McGowan begged for the media and the public not to “sink to that level” of accusing Argento, despite acknowledging that “many of these people who lost their ‘friend’ are wanting to lash out and blame.”

The actresses' words were a transparent plea to address the painful truths of depression, blaming only the “stigma of mental health” for Bourdain’s death.

“We are asking you to be better, to look deeper, to read and learn about mental illness, suicide and depression before you make it worse for survivors by judging that which we do not understand – that which can never fully be understood,” McGowan said. “Sometimes, we are stuck in the unknowable, and that is where we are now – a massive wave of darkness that threatens to swallow everyone in its wake.”

You can read McGowan's full letter below:

Sitting across from me is the remarkable human and brave survivor, Asia Argento, who has been through more than most could stand, and yet stand she does. She stood up to her monster rapist and now she has to stand up to yet another monster, suicide. The suicide of her beloved lover and ally, Anthony Bourdain. I write these truths because I have been asked to. I know so many around the world thought of Anthony Bourdain as a friend and when a friend dies, it hurts. Many of these people who lost their ‘friend’ are wanting to lash out and blame. You must not sink to that level. Suicide is a horrible choice, but it is that person’s choice.

When Anthony met Asia, it was instant chemistry. They laughed, they loved and he was her rock during the hardships of this last year. Anthony was open with his demons, he even wrote a book about them. In the beginning of their relationship, Anthony told a mutual friend, “He’s never met anyone who wanted to die more than him.” And through a lot of this last year, Asia did want the pain to stop. But here’s the thing, over their time together, thankfully, she did the work to get help, so she could stay alive and live another day for her and her children. Anthony’s depression didn’t let him, he put down his armor, and that was very much his choice. His decision, not hers. His depression won. Anthony and Asia had a free relationship, they loved without borders of traditional relationships, and they established the parameters of their relationship early on. Asia is a free bird, and so was Anthony. Was. Such a terrible word to write. I’ve heard from many that the past two years they were together were some of his happiest and that should give us all solace.

Anthony was 61, the same age my father was when he died. My father also suffered from intermittent deep depression, and like Anthony, was part of a “pull up your bootstraps and march on” generation. The a “strong man doesn’t ask for help” generation. I know before Anthony died he reached out for help, and yet he did not take the doctor’s advice. And that has led us here, to this tragedy, to this loss, to this world of hurt. Do NOT do the sexist thing and burn a woman on the pyre of misplaced blame. Anthony’s internal war was his war, but now she’s been left on the battlefield to take the bullets. It is in no way fair or acceptable to blame her or anyone else, not even Anthony. We are asking you to be better, to look deeper, to read and learn about mental illness, suicide and depression before you make it worse for survivors by judging that which we do not understand, that which can never fully be understood. Sometimes we are stuck in the unknowable, and that is where we are now, a massive wave of darkness that threatens to swallow everyone in its wake.

As I watch Asia do her job on set today, I see a pillar of strength who continues to work to put food on her children’s table. I see Elizabeth Taylor carrying on filming Cat on a Hot Tin Roof despite her love, her husband, dying in a plane crash. I see all of us who have carried on. Please join me in sending healing energy to Anthony on his journey, and to all who’ve been left behind to journey on without him. There is no one to blame but the stigma of loneliness, the stigma of asking for help, the stigma of mental illness, the stigma of being famous and hurting.

We must do more and be better. Anthony, our friend, would want it that way.

To the media and to the random commenter, Anthony would never have wanted Asia to be hurt, I’d like to think he would want us to have the collective conversation that needs to be had about depression. Blame is NOT a conversation, it is the shutting down of our collective growth. Which is where we are now. We have a choice as humans, shrink to our smaller, uglier selves, or be better and grow as only true Phoenixes can. I urge you to be that Phoenix.

With great sadness and even greater hope, I remain,

If you are considering suicide, reach out. We need you here. You matter. You exist. You count. There is help a phone call away, reach out.

For a USA Crisis Text Line, please text CONNECT to 741741 from anywhere in the USA, anytime, about any type of crisis."