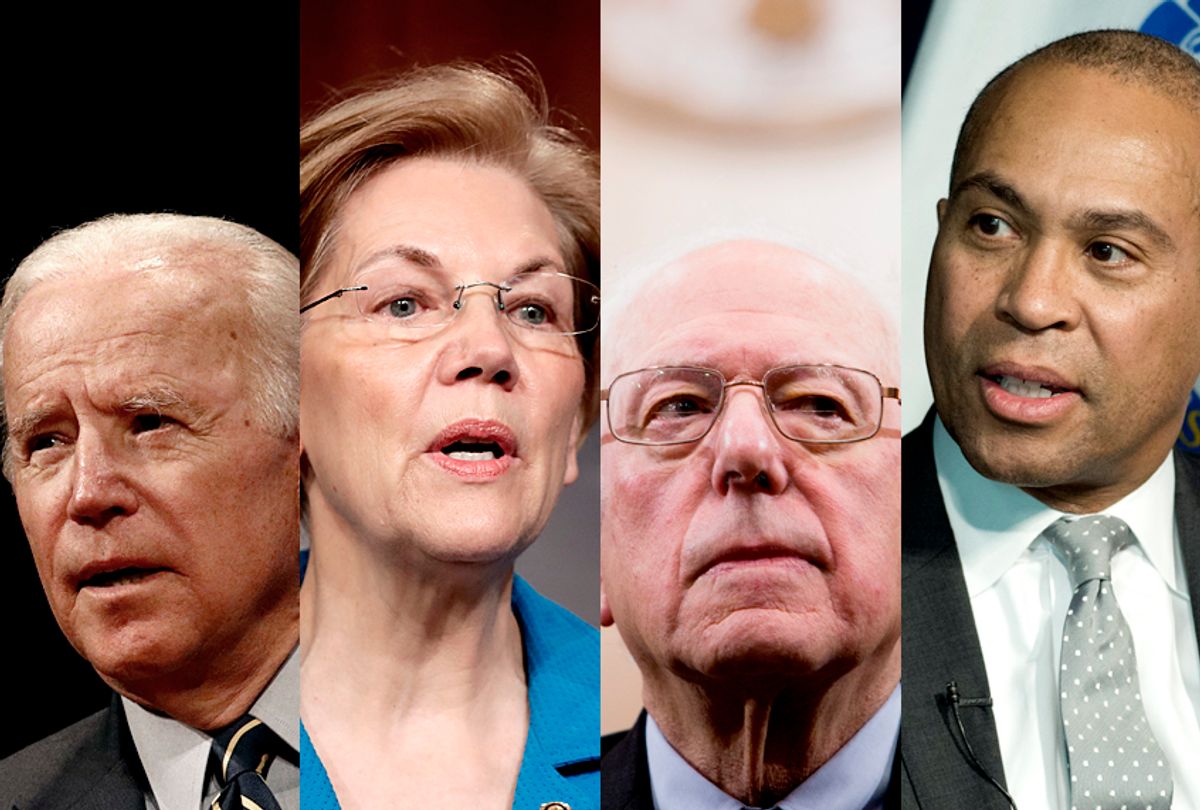 Since the beginning of 2018, former President Barack Obama has reportedly held private meetings with a number of prospective Democratic presidential candidates — so we can now begin to get a keen sense of who the 44th president believes is poised to lead the party in 2020 based on the identities of his callers.

Over the course of the past several months, Obama has met with Sens. Bernie Sanders and Elizabeth Warren, former Gov. Deval Patrick of Massachusetts and former Vice President Joe Biden to discuss a number of topics, according to Politico. He also held meetings with a series of dark horse candidates, with most of these encounters taking place at the World Wildlife Fund building in the West End neighborhood of Washington. The subjects of the meetings were wide-ranging but on many occasions touched on the future of the Democratic Party and how it could triumph in the 2018 and 2020 elections.

Obama's meeting with Sanders in mid-March reportedly occurred at the Vermont senator's request, with the two men discussing their different notions about what Democratic priorities should be going into the future. Sanders and Obama also traded ideas about their contrasting views on idealism and pragmatism, a natural topic given that Sanders is perceived as being significantly to the left of Obama on most issues. They notably did not discuss whether Sanders will run for president in 2020 — a feat that may just have gotten be harder for the Vermont senator. A recent rule change by the Democratic National Committee could block him from running in the primaries, unless he wants to register as a Democrat.

During his January meeting with Biden — with whom the former president has a legendarily warm friendship — Obama pointedly did not discuss whether Biden would run in 2020. (The former veep is rumored to be leaning in favor of doing so but won't make a final decision until after the 2018 midterm elections.) Obama is reportedly waiting for Biden to make a decision on his own, and it's unlikely the former president would make any official endorsements until after a winner emerges in the 2020 primaries.

Obama is also reported to have met at his office twice with Warren — and on one of those occasions, not for an entirely congenial reason. He met with the Massachusetts senator in the spring of 2017 after Warren denounced Obama's decision to speak at a Wall Street investment firm for $400,000. That speaking engagement prompted considerable outcry, as it seemed to reinforce a Washington culture in which former elected officials wind up accepting huge financial paydays from the rich and powerful. Warren reportedly did not apologize to Obama for speaking out but listened to his point of view, and he did likewise with her.

Obama's second reported meeting with Warren occurred this April and lasted more than an hour and a half. This one was apparently friendlier and more rambling, with the two discussing Richard Cordray, the former head of the Consumer Financial Protection Bureau who is now the Democratic gubernatorial nominee in Ohio, as well as the Trump presidency and their shared reminiscences.

The former president also met with former Gov. Deval Patrick of Massachusetts. Like Biden, Patrick is a close Obama friend as well as one of his earliest supporters in 2008, and both Obama and members of his inner circle are reportedly hopeful that Patrick will run for president in 2020. The Politico report also noted, however, that Patrick "is on the board of the Obama Foundation, giving them at least an outward reason for the meeting beyond politics."

While these were the four big names to meet with Obama, they were hardly alone. As Politico reported, the former president also met with several potential dark horse candidates in the 2020 race:

Meanwhile, people who have been told about other meetings confirmed that they’re going on with some of the lesser known potential 2020 candidates, too. Mitch Landrieu, the former New Orleans mayor being urged to run for president — including by some Obama alumni — sat with the former president in the fall. Jason Kander, the failed 2016 Missouri Senate candidate who’s looking at making an against-all-odds White House run, stopped by in January. And Pete Buttigieg, the mayor of South Bend, Indiana, who’s thinking of a run of his own, was in to see Obama at the end of last year.

Obama has not met with a number of other prospective 2020 Democratic candidates, including Sen. Kirsten Gillibrand of New York, Sen. Kamala Harris of California and former Virginia Gov. Terry McAuliffe.

What makes these meetings notable is that they reveal a determination by the former president to remain relevant in Democratic Party politics -- perhaps even a power broker -- as he maintains a low public profile. Former presidents have traditionally tried to assume the role of elder statesman and stay out of the partisan fray; they have varied wildly in terms of the roles they've assumed behind the scenes. A politician as shrewd as Obama is unlikely to have met with such high-profile figures without realizing that at some point those meetings would leak to the press, bestowing a certain legitimacy on the names considered important enough to merit a private conference.

That Sanders and Warren were among those names is noteworthy but unsurprising; both have been repeatedly floated as presidential prospects in 2020 -- although more recently Warren has suggested she won't run -- and Sanders' strong 2016 campaign against Hillary Clinton signaled a new progressive surge within the party. Biden would likely be the 2020 frontrunner if he decides to run, although he and Obama are reported to frequently speak by phone and their meeting could have been as much for sentimental reasons as practical ones.

Perhaps the most important name here is Patrick: Obama and his associates may want Patrick to run for president in 2020, but his name doesn't always appear in surveys that list the most likely candidates, and he remains a largely unknown quantity outside Massachusetts. Even if Obama doesn't directly endorse him, the fact that he met with Patrick -- but apparently not with higher-profile possible candidates like Gillibrand and Harris -- reveals at least a little about how the former president sees the upcoming race to dethrone Donald Trump.

The Democratic Party needs to find a unifying message in future elections.