Here's how late-night hosts reacted to the Trump-Kim summit

"Kim Jong Un is a brutal dictator," Jimmy Kimmel said. "They’re definitely going to like each other." 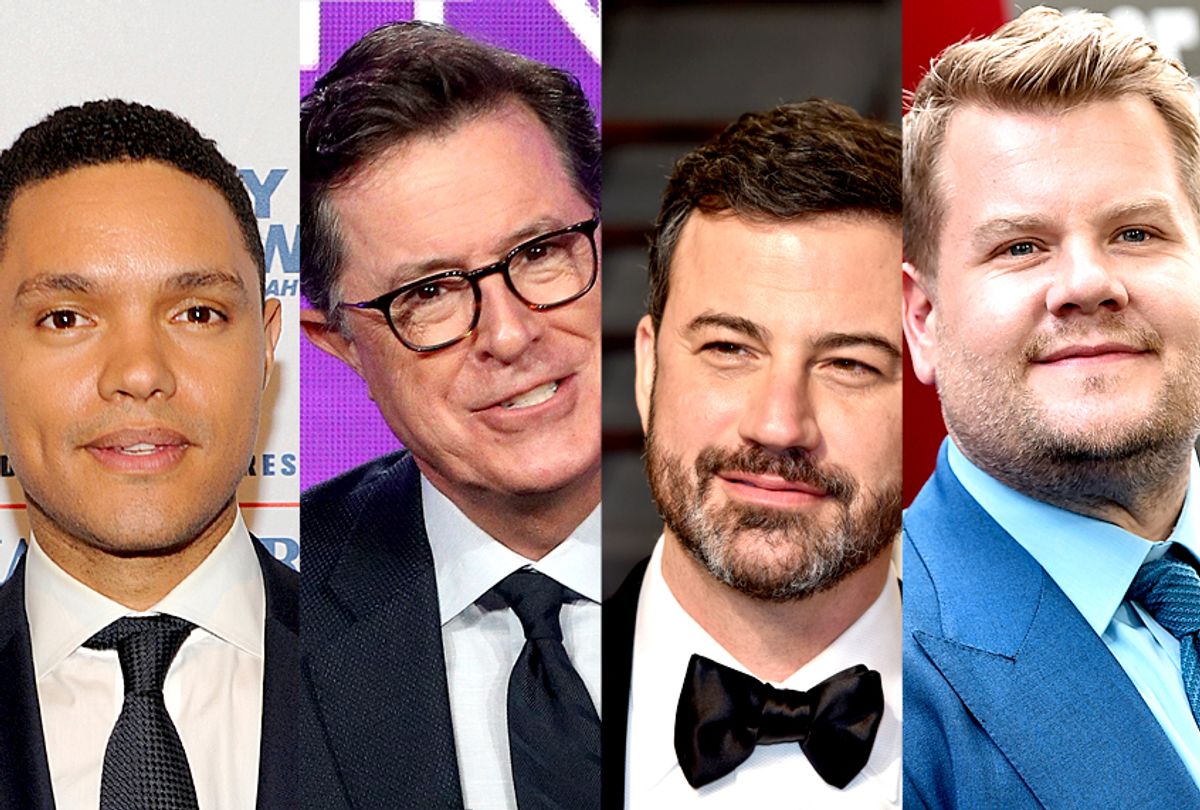 Most of the late-night hosts were live just as President Donald Trump was meeting with North Korea leader Kim Jong Un for a historic summit in Singapore. But even without seeing the lengthy handshake between the two, the many shots of them smiling together and the endless cable news coverage, most weighed in anyway.

On "The Late Show," Stephen Colbert reflected on just how monumental this meeting is for the United States and the global community. "As we speak, President Trump is meeting with North Korean dictator Kim Jong Un, a scenario that just a few years ago would have been unthinkable — because it includes the phrase 'President Trump,'" he quipped. "Now, the summit actually started at 9 a.m. Tuesday morning Singapore time, which is 9 p.m. New York time. So they're actually meeting in the future, which finally explains both their haircuts."

"Tensions are high," Colbert continued. "The United States is on the precipice of unthinkable international conflict — and that’s with Canada. Our relations have not been this bad with Canada since they stole the word 'bacon.' Canadian bacon is just round ham, you monsters!"

Jimmy Kimmel declared that Trump doesn't really understand diplomacy or perhaps has it backwards. "For whatever reason, Donald Trump seems determined to become friends with our enemies and enemies with our friends," he said on "Jimmy Kimmel Live."

"Trump said he hopes he and Kim Jong Un like each other," Kimmel added. "Kim Jong Un is a brutal dictator who starves his people and murders his political enemies. They’re definitely going to like each other. They might even fall in love."

On "The Late Late Show," host James Corden had the most biting jokes of the evening. "Of course, tomorrow is the big summit meeting between President Trump and North Korean leader Kim Jong Un," he began. "Now Trump spent the day preparing for the summit, which basically means he wrote on his hands: South Korea good; North Korea bad. Just so he doesn't get confused."

But Corden was just getting started. "When asked by reporters how he will know if North Korean leader Kim Jong Un is serious about the peace treaty, President Trump said he will use his quote 'touch' and 'feel,'" he continued. "This may not be a great plan — the last time Trump used his touch-and-feel method, he had to pay Stormy Daniels $130,000."

"Honestly, it might work," Corden said. "After three minutes of being touched and felt by Trump, Kim Jong Un is just going to go, 'Fine, fine, take the nukes! Whatever you want! Just stop touching me!'"

For Trevor Noah, he connected the rising tensions between Trump and Canadian Prime Minister Justin Trudeau to the Singapore summit. "So in essence, to win his Nobel Peace prize with North Korea, Trump is going to start a war with Canada," Noah said on "The Daily Show." "It really is brilliant and the man is playing some two-dimensional chess."

Surely tonight, the late-night comics will come with fresh jokes about the summit, having digested some of the news, and hopefully, they will poke some fun at conservatives advocating for Trump to receive the Nobel Peace prize, even though so far, nothing has been accomplished. The low bar of this administration is always fun to laugh at.