Nixon in China? Forget it: Stop comparing the Trump-Kim showcase to that historic 1972 summit 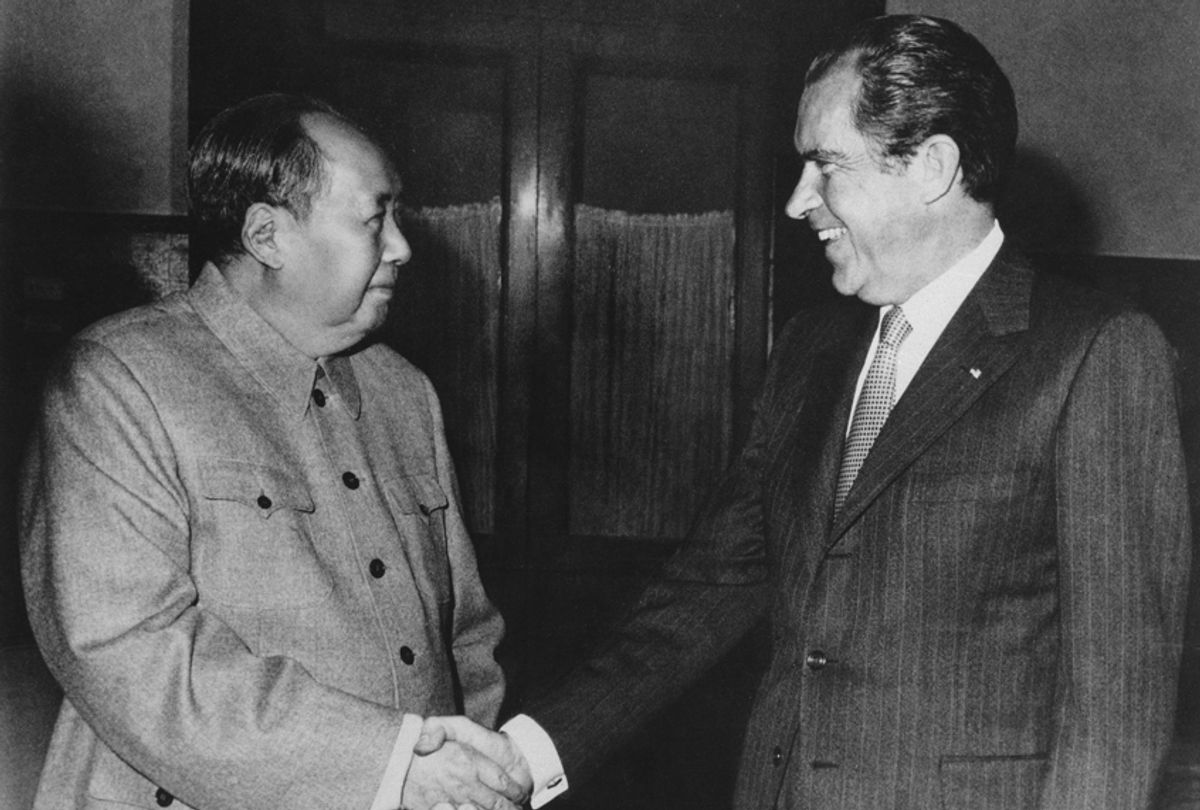 With President Donald Trump in the midst of negotiations with North Korean dictator Kim Jong Un, there are obvious parallels to be drawn with the landmark foreign policy achievement of another American president — Richard Nixon.

Nixon, despite his post-Watergate infamy, is heralded for opening up relations between the United States and China in 1972. Nixon was also widely perceived as being a foreign policy conservative, whose toughness was part of what made voters love him — and that reputation gave him the domestic political capital necessary to make outreach toward "Red China" viable — it stands to reason that Trump's own historic meeting with an infamous East Asian despot is drawing parallels with Nixon's visit to China, at least in some circles.

There are at least two major problems with this analogy.

The first and perhaps most important is that Trump's decision to meet with North Korea's leader seemed to occur spontaneously -- as do most of the president's decisions -- and was made possible by initial negotiations between Kim and South Korean President Moon Jae In. Nixon's visit to China and his eventual meeting with Chinese leader Mao Zedong, on the other hand, was the result of long and careful planning.

It’s interesting, looking back, to see how carefully Nixon prepared the way. In April 1971, he approved a trip to China by the U.S. national pingpong team, announced a plan to ease travel and trade restrictions, and said that one of his long-term goals was the normalization of relations with China. The Chinese responded that spring, through Pakistan, that Nixon himself would be welcome in Beijing. Nixon initially sent Kissinger instead, on a July 1971 secret mission that was facilitated by the Pakistanis. According to Nixon biographer Stephen Ambrose, Kissinger sent a one-word coded message that his mission had succeeded: "Eureka."

Kissinger's secret trip to China was the beginning of a preparation process that would continue for another seven months. Nixon didn't actually make it to China until February 1972. By contrast, Trump met with Kim Jong Un only weeks after the idea was broached and only a few days after Secretary of State Mike Pompeo -- perhaps playing the role of Kissinger in this drama -- made an overnight visit to North Korea.

The other major problem is more subjective: Both China and the United States gained something of significance from the Nixon-Mao summit, but at this writing, North Korea appears to be the only major winner after Trump's meeting with Kim in Singapore.

As the Cold War wore on into the 1970s, China began to see the Soviet Union as more of a national security and geopolitical threat than the United States. Mao's regime calculated it was in China's interest to forge an alliance with the Soviet Union's chief adversary and the world's only other superpower, the United States. Similarly, China was suffering ongoing economic stagnation in the years after the intensely disruptive Cultural Revolution of the 1960s and desperately needed relief from its economic and international isolation.

Nixon, meanwhile realized that separating China from the Soviet Union, strategically speaking, could only help the U.S. in the Cold War. He saw the potential in opening up China's economy to American business interests and also recognized that this would be a major political victory for him at home, even as he worked to bring the Vietnam War to a successful conclusion. Finally, the Mao-Nixon meeting ended with substantive agreements on important and contentious issues, including China's relationship with Taiwan.

Has Trump's meeting with Kim Jong Un yielded anything beneficial to the United States? If so, it's not visible at this moment.

Evans Revere, a former U.S. negotiator with North Korea, told Reuters that the document signed by Kim and President Trump appeared valueless. "There is almost nothing of significant substance — or even new — in this document," he said. "It is a list of aspirational goals. This is a win for North Korea, which seems to have yielded nothing." Despite the cheers from Trump's supporters, who are already clamoring for the president to receive the Nobel Peace Prize, the principal concessions in this agreement flowed in one direction, from the United States to North Korea.

North Korea did not want the U.S. conducting war games on the Korean peninsula on behalf of its ally, South Korea. Trump agreed to suspend the war games.

North Korea wanted the United States to acknowledge that it has made good faith efforts to denuclearize, a statement most observers view with extreme skepticism. During the summit Trump told reporters that "I think he really wants to de-nuke," thereby conceding the Kim regime that talking point.

Finally and most important, Trump has granted Kim Jong Un legitimacy both in his home country and throughout the community of nations, simply by meeting with him in the first place. As The Washington Post reported:

All dictators are insecure, and absolute dictators are absolutely more insecure than the rest. Several years ago, Kim staged the elaborate murder of his uncle, forcing the rest of the elite to watch as his rival was ripped apart by antiaircraft machine guns. Fear and terror are one way to transmit messages of power; the inspiration of admiration and awe are another. The flags and the handshake will reinforce Kim’s legitimacy and make him harder to depose.

Defending Richard Nixon in an article for Salon may seem peculiar (although I have previously argued that the 37th president was more liberal, at least on domestic social policy, than many people realize). Considering that Nixon attacked his enemies in ways eerily similar to the tactics employed by Trump today — and considering that Nixon, like Trump, doubled down on these tactics when his own potential criminal activity was being investigated — he doesn't make much of a presidential role model.

Nevertheless, credit must be given where it's due. Nixon altered the course of history with his 1972 visit to Beijing, and it seems likely that Trump hopes to emulate that. If it turns out that North Korea really does denuclearize as a result of this summit, then Trump will indeed deserve to be ranked next to Nixon as a historic peacemaker. But such declarations are premature at best. The similarities are skin-deep; this summit looks like a poorly prepared piece of showmanship, a pale carbon copy of the 1970s original.

Salon talks with a North Korea policy expert about the risk of nuclear war.