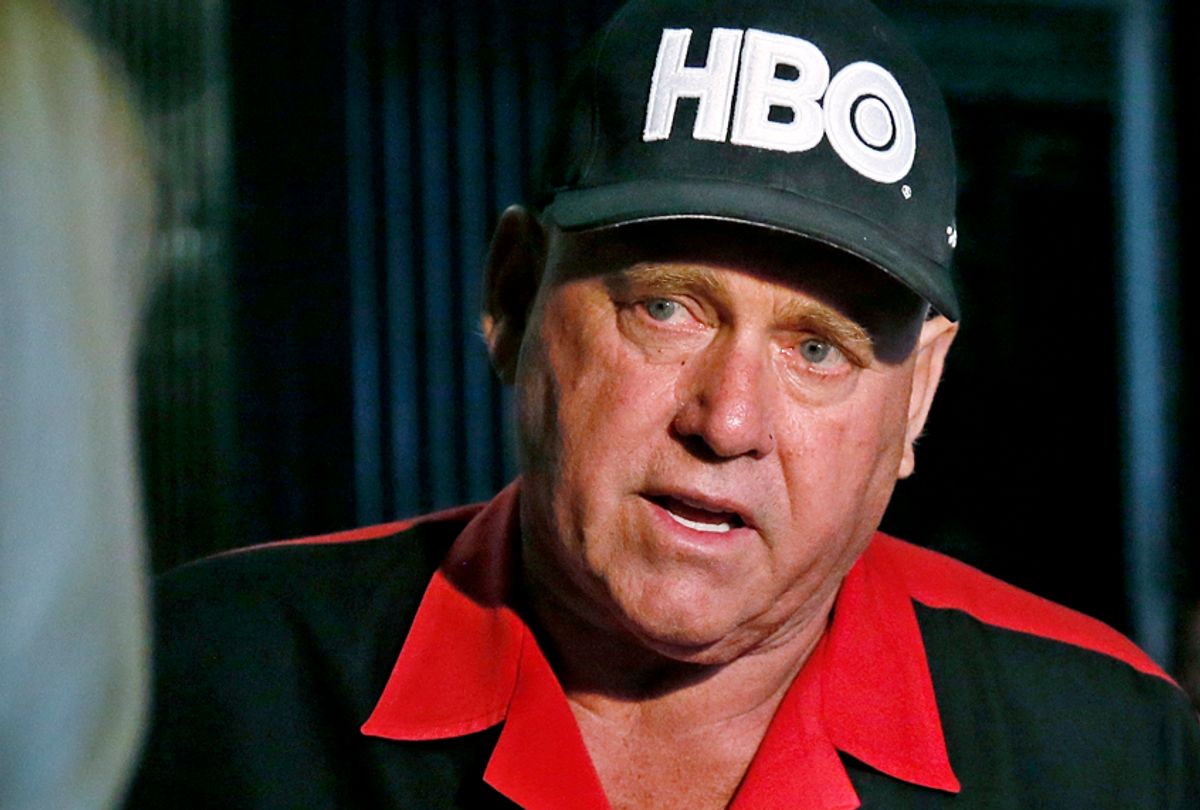 Dennis Hof, the owner of a half-dozen legal brothels in Nevada, inched one step closer to becoming a Nevada state legislator on Tuesday night. The pimp and the star of the HBO adult reality series "Cathouse" defeated three-term Republican lawmaker and hospital executive James Oscarson in Tuesday's primary for the state legislature, automatically becoming the favorite to win Nevada's red-leaning State Assembly District 36 in this fall's midterm elections.

Hof, who wrote a book titled "The Art of the Pimp," has cast himself "The Trump of Pahrump," his hometown. In April, he campaigned alongside longtime Trump adviser Roger Stone.

"It's all because Donald Trump was the Christopher Columbus for me," Hof told the Associated Press after election results rolled in Tuesday night. "He found the way and I jumped on it."

His victory comes at the time when religious groups and anti-sex trafficking activists are campaigning to reverse ordinances that allow for legal prostitution and brothels in two of Nevada's seven counties. The question will be on the ballot in Lyon County, where Hof owns four brothels, this fall. Inspired by the Lyon initiative, activists are also gathering signatures to try to get a similar measure on the ballot in Nye County, where Hof owns two other brothels.

If the two measures qualify for the ballot and voters strike down the county's brothel ordinance, about 40 percent of the state's 21 brothers will be forced to close, the Nevada Independent reports.

But activists in favor of the brothel ban say brothels are unsafe environments that have put women in danger.

"The illegal and legal sex trade are inextricably linked. We know wherever a jurisdiction legalizes prostitution, that the incidents of illegal sex trafficking skyrockets," Jason Guinasso, an attorney who represents No Little Girl, an activist group that gathered enough signatures for a Lyon County referendum, told CNBC.

"Legal brothels are intensely flawed and not ideal at all," said sex worker Maggie McMuffin. "That said, closing them would displace so many women. There are people who come out here to escape bad relationships, drug habits, or to just save money. There are immigrants here saving up money so they can go home to their families. ... These places are their home."

"We're extremely concerned about the recent trend of limiting sex workers resources," she said. "While legal brothels are flawed and in no way the ideal solution, this will only further displace sex workers that are having all of their resources, to provide a safe workplace, taken from them."

"At the end of the day, it is about whiteness, affluence, and respectability. This movement frames itself in a way that appeals to its exemption from criminal liability," said Vermilion. "I posit that there'll be an influx of sex-related and adjacent crimes as a result of the brothels being closed, or even minimized."

"I feel that the only way any positive impact will be made is if legislators listen to the people actually engaging in the labor they are restricting. There is no real freedom where the desires of the workers are not taken into consideration," she concluded.

Sex worker Ginger Banks bristled at the anti-brothel effort, blasting it another initiative that purports to be protecting women but could actually have destabilizing and demoralizing effects for sex workers — similar to FOSTA-SESTA, the anti-trafficking bills signed by President Trump to curb sex trafficking.

"It seems to be the same movements we see all over claiming to care about trafficking victims when in reality they are just anti-prostitution organizations. They know nothing about sex workers so they rely on stereotypes," she said.

Hof will now face off against Democrat Lesia Romanov in November's midterm elections. The district, mainly centered in Nye County, was an easy snag for Trump, who received more than 68 percent of the vote in 2016.