Her smear flew somewhat under the radar, but it is one conspiracy theory that the far-right has peddled for years 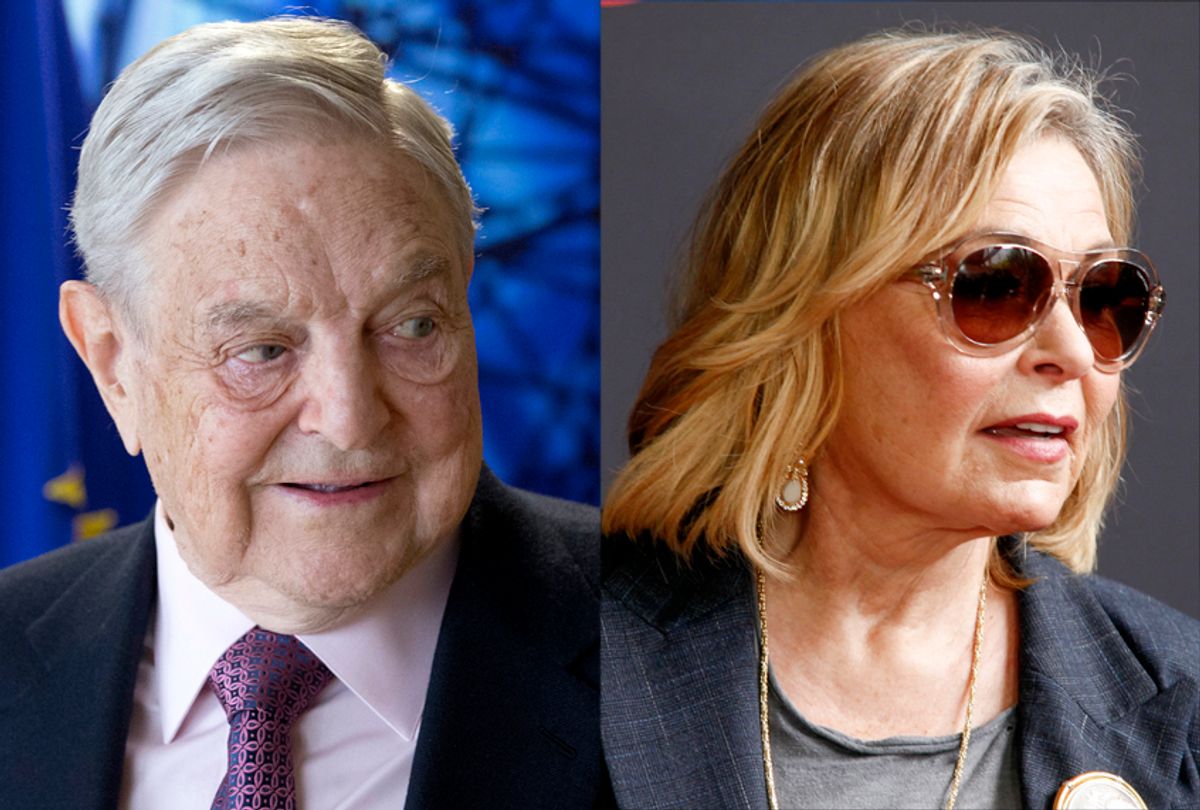 Roseanne Barr is doing everything but "leaving Twitter" – as she claimed she would – after firing off the vile and racist tweet about Valerie Jarrett, who served a senior adviser to former President Barack Obama, that resulted in the swift cancellation of the reboot of her hit sitcom by ABC.

In a new tweet sent out Tuesday, Barr "sincerely" apologized to billionaire philanthropist George Soros for alleging he had colluded with Nazis.

"His family was persecuted by The Nazis & survived The Holocaust only because of the strength & resourcefulness of his father," Barr tweeted.

The "Roseanne" star then directed her followers to "learn more of the truth" by linking to the website for Open Society, the foundation founded by Soros.

Barr's initial tweets about Soros arrived on the same day as her tweet about Jarrett, and the slurs against Soros flew somewhat under the radar.

She first tweeted "Chelsea Soros Clinton," to which Clinton replied: "Good morning Roseanne - my given middle name is Victoria. I imagine George Soros’s nephews are lovely people. I’m just not married to one."

Roseanne responded: "CORRECTION: CHELSEA CLINTON IS NOT MARRIED TO A SOROS NEPHEW. HER HUSBAND IS THE SON OF A CORRUPT SENATOR, SO SORRY!"

She then noted, "George Soros is a nazi who turned in his fellow Jews 2 be murdered in German concentration camps & stole their wealth-were you aware of that? But, we all make mistakes, right Chelsea?"

Roseanne also tweeted a claim that Soros was trying to "overthrow" the U.S. government. Her posts were later deleted, but Yahoo News Managing Editor Colin Campbell shared screenshots showing they had also been re-tweeted by Donald Trump, Jr.

Soros was born in 1930 and was a 14-year-old Jewish teenager trying to survive in Nazi-occupied Hungary. And while there are many conspiracy theories about Soros, some on the far-right have continued to peddle the myth that the liberal donor was a war criminal. Two weeks ago, Barr spread it to her nearly 900,000 Twitter followers and then Trump, Jr. to his 2.8 million.

When Barr apologized to Jarrett on May 29, she made no mention of Soros, nor did ABC when they sent out a statement denouncing Barr's words and cancelling "Roseanne." Trump, Jr. denied there was any anti-Semitic intent behind his re-tweets.

InfoWars' Alex Jones also fettered the fire, claiming there was proof to Barr's slurs – that Soros was a Nazi collaborator. He highlighted a 20-year-old interview of Soros on "60 Minutes," where the financier reflected on navigating survival in Nazi Hungary. Among such efforts, Soros tried to keep his Jewish identity hidden and his father paid a Christian government official to protect him. Again, Soros was 14 at the time.

In recent years, the 1998 interview with Soros and the dozens of conspiracy theories about him, were given new life when Fox News aired a three-part series about Soros orchestrated by Glenn Beck titled, "The Puppet Master."

"Beck turned Soros into a cartoon nightmare — using actual puppets as props as he claimed the billionaire was funding a vast web of liberal organizations and trying to 'form a shadow government, using humanitarian aid as a cover,'" the Washington Post reported. "In the second episode of Beck’s series, Soros was called 'the son of Orthodox Jews.' Two days later, Beck claimed 'his mother was wildly anti-Semitic' — a Nazi sympathizer who had perverted her son."

The series, which was considered to be anti-Semitic, was also widely condemned.

"To hold a young boy responsible for what was going on around him during the Holocaust as part of a larger effort to denigrate the man is repugnant," the Anti-Defamation League said at the time. "The Holocaust was a horrific time, and many people had to make excruciating choices to ensure their survival."

But Beck and Fox News not only revived the conspiracy theory that Soros was a Nazi collaborator – they also gave it legitimacy. Since then, far-right entertainers, Ann Coulter included, have continued to promote it, moving the theory out of fringe message boards and more into the mainstream.

After Barr propelled the Soros myth, the philanthropist's son, Alexander Soros, wrote an op-ed in the New York Daily News defending his father – and filling in the holes of where the conspiracy theory conveniently falls agape.

"Because of his lifelong dedication to human rights and social justice, my father George Soros has become the enemy of choice for despots at home and around the world," he wrote. "That means he is frequently targeted by malicious lies and wild conspiracy theories."

Soros added that, while he normally doesn't like to give these outlandish theories attention, the one Barr and others have peddled for years now is so gross and harmful that he could not remain silent.

"Roseanne Barr's claims are not just an insult to my father, but all those who endured the Holocaust," he wrote.